Don’t get us wrong – its 2175cc engine might be torque-laden, but it’s far from refined. So it’s best to keep revs low and ratios high if you want to make quick progress. That’s good, because its pre-war four-cylinder will rustle up a useful slug of heft from just 1000rpm. And corners? They won’t slow you – just turn, grip and hang on!

By the time you’re up to speed on the motorway, you’ll be smiling in wonder at all the other aspects of the DS’s dynamic armoury, not frowning at the vocal engine. And that’s why the DS is such a superb companion for longer journeys – you’ll be going just as fast as anyone else, but will be more calm and collected.

In the A- and B-road cut-and-thrust, the DS does take some getting used to. You learn to feed the steering, and roll the car into bends – pre-load and hold it right. It’s then you’ll find out how much lateral grip there is, despite the body roll.

The powered brakes have phenomenal stopping power, and the single spoke wheel is huge, leaving the steering disconcertingly light for those unused to guiding cars with their fingertips. Once dialledin to this delicate way of conducting a car, you’ve moved on – you’re a DS driver extrordinaire.

If you’re not a Citroëniste you will also need some time to get used to the control layout and instrumentation. But once you are, you’ll wonder why all cars aren’t made like this. You will probably also need to enjoy being the centre of attention – as one of the great things about being at a DS’s helm is seeing so many bystanders stop and stare, drinking in the delicious curves as it shimmers past.

Good-looking classic cars often get admiring glances from other road users when they’re being driven, but the way people react to this Citroën is something else. Its styling renders people accustomed to today’s motoring flotsam speechless. Everything from the Beige Vanneau paintwork of this example to the fuss-free details and striking proportions ooze style and wonder.

But you’ll get as much pleasure behind the wheel as the man on the street does looking at it. While the interior doesn’t have the plump cushions or wood-trimmed charm of rival Brits, its leather seats are ultra comfortable. Pencil-thin pillars and the curve of its panoramic windscreen create an airy and inviting ambience.

By far its most impressive quality is the amount of space in here – there’s no touching your passenger’s knee when changing gear, and the car’s whisper-quiet ride is unlikely to be upset by anyone in the back. Yes, the column-mounted gear selector creates space, but so does the DS’s incredibly useful flat floor.

Cars are so often burdened with expectations way beyond their reach. Citroën set out to make something comfortable, refined, and stylish and what it created was both an icon and a revolution. It smashed all expectations – it wasn’t just comfortable, refined and stylish, it was the epitome of all of these things in car form. Now, when people think of French classic cars, they automatically think of the DS. They are works of art, as appreciated as any painter’s brush stroke. And consider this: what other classic can you pick up for £20,000 that’s as stylish or as brilliantly capable as the well-sorted DS? 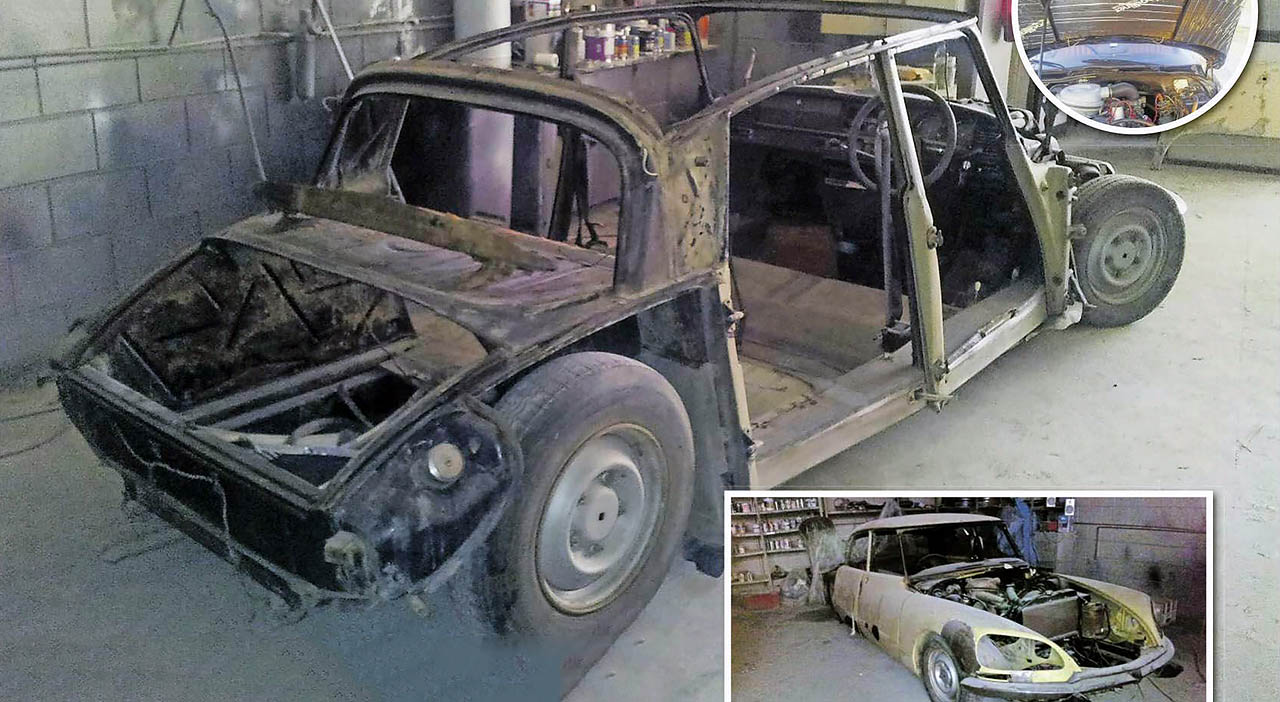 If you’re at the NEC on Sunday, take a long, close look at this glorious Goddess which is for sale with Silverstone Auctions. We promise that you’ll find it hard resisting putting a bid on it.

Check the door bottoms, pillars, boot floor, under the roof seal, along the chassis members, the hydraulic lines, and all around the rear suspension for corrosion.

Check the history – has it been serviced by classic Citroën specialists? Changing the oil isn’t as simple as you’d think, the oil filter is an internal unit held in place behind a plate.

Four on the tree transmission is generally bulletproof, but watch out for damage to synchromesh on manual cars.

Knocking noises and vibrations on bumpy roads could mean the balljoints need replacing.

The big single-spoke steering wheel is light to use and allows a good view of intruments and controls.

The driving position is exceptionally comfortable.

Every little DS detail is a work of modern art.

Insulation for the bonnet is one of the last jobs completed on the car. This material was also used in the doors to give them more weight and a reassuring thud when closed.

All the panels were removed to reveal a solid car. Owner at the time George Geogiades was ‘relieved’.

How the DS looked in 2011 just before the long restoration process started. Quite a brave project.

battery and suspension parts have been installed.

The car in its later stages in Cyprus. Just a bumper and the

reversing lights for the rear end, and new interior to be fitted.

How a Mediterranean island rescued a Citroën As millions of people were popping open the bubbly and singing Auld Lang Syne while the New Year was being ushered in, this most Gallic of French cars was preparing to make a trip.

Not from France, or even from somewhere in Britain, as you might expect for a right-hand drive model – this particular DS was about to set out from the Mediterranean island of Cyprus, where it had completed a long and detailed restoration. It was delivered new to a Cypriot buyer in 1973, where it remained until early this year.

The car’s youth was spent pottering around Nicosia, the capital city, and its first owner, a wealthy businessman, kept it for 38 years. During those years, it fell into disrepair and in 2011 second owner George Geogiades took the reins of the Déesse. This is where the bulk of the restoration story begins. ‘George was just a guy who fell in love with the car and restored it to keep for himself,’ explains George Andreou, owner of KEG Cars in Rickmansworth, Hertfordshire, and the DS’s current custodian. Andreou is from Cyprus and is a committed classic car lover, having owned streams of Italian machines. He adds: ‘Unfortunately the economic climate in Cyprus meant he was forced to sell it. It was an incredibly cherished car.’

From 2011 to 2014, George Giogiades – with the help of VPK Restoration Centre in Nicosia – restored it to possibly better than original condition. About £9000 was ploughed into the restoration – and although the work is top notch, every single replacement part has it owns story.

Taking on a DS restoration project in Cyprus was chock-full of stumbling blocks – among them the lack of Citroën specialists on the island – but George and his team of mechanics worked around the inherent problems of there being few parts, spares or even DS cars to source replacements from.

Rifling through the accompanying documents you’ll find smatterings of receipts from all over Europe. Thousands were spent at Barnet-based DS Workshop and many other parts were sourced from German outfit Der Franzose – there’s a recent products leaflet from that firm in the boot. The restoration was thorough and very well documented. In fact, it would be easier to write about what’s not been replaced.

First, all the panels were removed, leaving the skeleton bare and the bones of the car visible. The DS was well preserved thanks to the local climate and lack of salt on the roads. Pumps, pressure accumulator spheres, and all the hydraulics have been replaced. As a result, the rise and fall of the suspension is just how you’d expect.

Since coming to the UK, the carburettors have been re-worked, electronic ignition has been installed and the heads have been re-skimmed so that the car can run on unleaded. The DS may have been way ahead of its time when it was launched but subtle changes can make it even easier to live with in 2016. Inside it’s more of the same excellent story. A complete replacement interior has been fitted – so the dark tan seats are unblemished and look as stylish and as comfortable as they would have fresh from the factory. New carpet, armrest and head lining complete the immaculate picture.

All mechanical aspects of the car were similarly treated and the engine benefits from having been stripped and checked before being rebuilt with new gaskets and valves. The all-important hydropneumatic system was also rebuilt. The original panel gaps remain, but the quality thud of the doors when this DS closes is eerily German sounding, such is the quality of the work.

It’s a fine car. So are there any more like this in Cyprus? George reckons the days of the smart money going on Cypriot classics might be numbered. ‘If the UK exits Europe there will be more taxes to pay on importing cars (unless an individual trade deal is struck) and interesting and well-maintained cars coming from warmer EU countries like Cyprus could be a thing of the past,’ he says. ‘Imported freshly restored gems like this DS might not make quite so much economic sense after a Brexit.’

Refined, comfortable, and now appreciating in price, this Porsche 928 could be a sly buy. Just shy of 75,000 miles, it’s had 29 pages worth of receipts poured into it.

Cars from the 1960s are increasingly looking like good value; for instance, this Dearborn built S-code Mustang can be had for the same money as a Capri 2.8i.