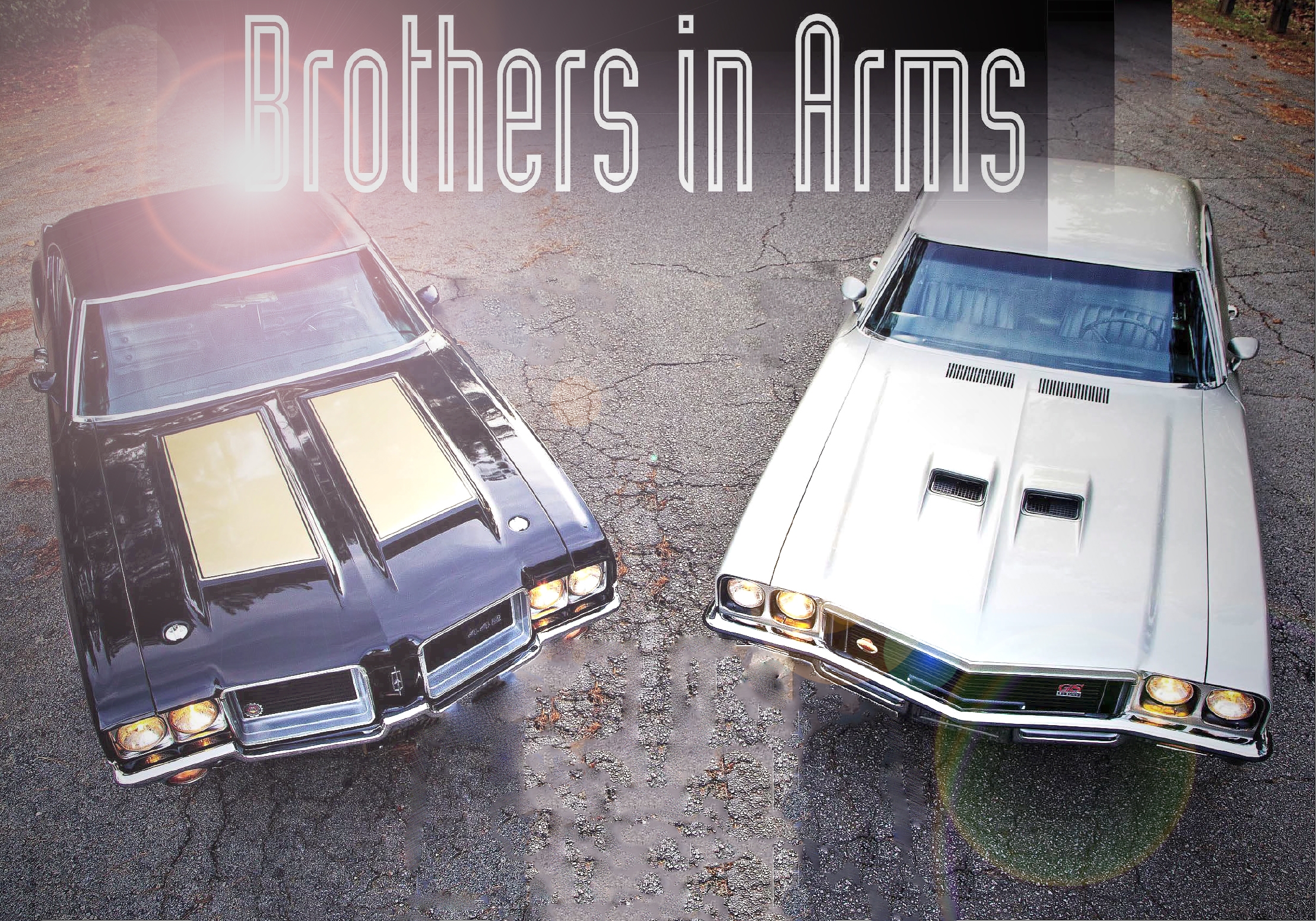 Brothers in arms – 1971 Oldsmobile 442 W-30 vs 1972 Buick GS 455. When upscale Buick finally challenged Olds in the muscle car race, it was over…  Imagine Manchester United playing Chelsea in the cup final. Wayne Rooney versus Frank Lampard. It could have happened, but now it probably wont. It did happen with two other ‘brothers’, not in a football game, but on streets and dragstrips.

Oldsmobile 4-4-2 W-30 versus Buick GS 455 Stage 1, A-body brothers each considered the ‘gentleman’s muscle car’. Sibling rivals from the era when GM divisions competed more with each other than with Ford, Chrysler, or AMC. John Z DeLorean started it all with a third brother, the 1964 Pontiac GTO. Olds dropped a 400-cube, four-barrel dual exhaust into the Cutlass to create the 4-4-2 a few months later.

When the 1965 Buick GS arrived within a year, it technically violated GM’s 400-cubic-inchdisplacement limit for A-body cars. Badged as 400, its Wildcat V8 was a 401-cube ‘Nailhead’ V8. GM replaced its 1964-’67 Abodies with new 1968 models, with new sheetmetal scheduled for every two years. Through ’69, the GTO was GM’s preeminent muscle car, and the 4-4-2 was its more refined brother, with better handling. The subtle, more relaxed GS wasn’t a contender.

GM did away with its 400-cube limit for the 1970 model year, and Buick was ready, especially after the 1969 Opel GT launch. “The increase in showroom floor traffic when the GT went on display early in April was almost unbelievable,” reads the Buick Engineering Production Information Department’s outline of the 1970 GSX. “Some Buick dealers reported 5000 people through their showrooms in one weekend.”

Paul Haddock, owner of the 1972 Buick GS 455 Stage 1 on these pages, was sent a copy of that report. He also owns a 1970 Stage 1 hardtop and a 1971 GS 455 convertible. The GSX, a 455-cubicinch Buick A-body with ‘mod’ graphics typical of the era, would be the Skylark’s halo model, which Buick hoped might help close the model’s 50,000-unit annual sales gap relative to the Olds Cutlass.

When torque came to shove, it wasn’t the GSX, with un-Buick-like flat black stripes on deep-yellow paint, that gave the GS street cred. It was the Stage 1 455. “It’s the car that beat the Hemi “Cuda,” allows Mike Bivins, owner of the 1971 Olds 4-4-2 W-30 sharing these pages with Haddock’s Stage I. Like Lampard versus Rooney, the Olds versus Buick muscle car rivalry would be short-lived. Car insurance rates were rising steeply by the late Sixties, and the US Environmental Protection Agency, established in December 1970, enacted immediate restrictions on leaded premium fuel.

Stricter regs were due in 1975. Olds and Buick lowered the compression ratio on their blueprinted 1971 W-30 and Stage 1 engines from 10.5:1 to 8.5:1 and complied with a mandated switch from SAE gross to net horsepower reporting. By 1972, the Hemi ’Cuda that Buick beat in ’70 was gone, and the Plymouth pony’s top engine was a 260bhp, 340 cubic-inch V8. A year later, the Organization of Petroleum Exporting Countries staged its first oil embargo. “Despite the almost total demise of the high compression/premium fuel engine, the ’71 Super Cars have managed to retain their essential vitality,” A B Shuman wrote in the October 1970 issue of Motor Trend. In Shuman’s story, the Buick GS 455 Stage 1 edged a ’71 W-30 prototype with a four-speed stick and ’70 sheetmetal, recording a 6.5-second 0-60 run to the Olds’ 6.6. It was quicker than the GTO, Chevy Chevelle SS 454, Camaro Z28, and Plymouth Road Runner. 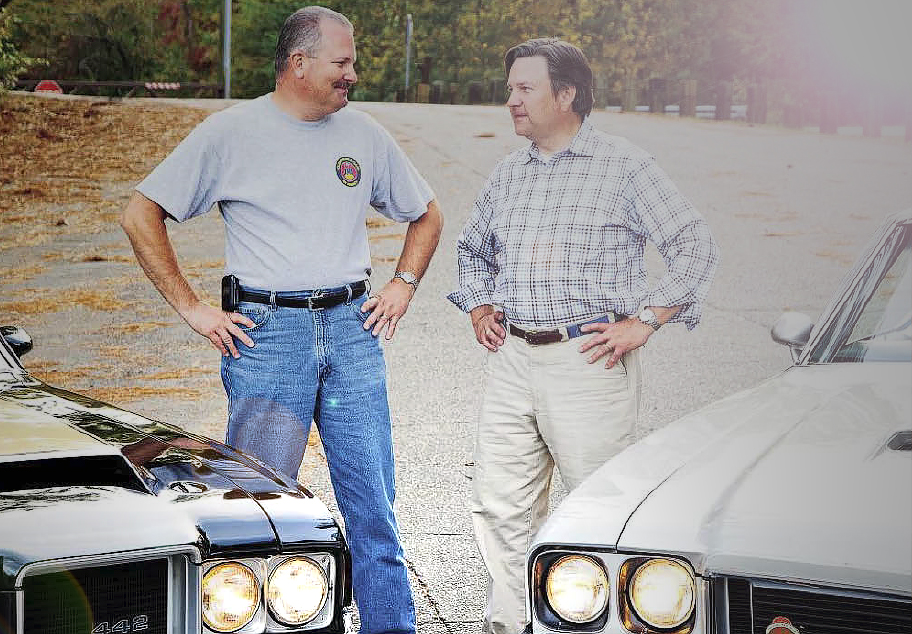 Shuman asked Olds for an automatic W-30 to see what effect its combo of torque converter and different valve timing would have. It beat the Buick with a 6.1 second 0-60. Motor Trend’s test of the ’72 GS Stage 1 was a sidebar to a June 1972 comparison entitled ‘Sayonara Supercar’. “The amazing thing, considering all that’s happened just in the area of emissions controls,” Shuman wrote, “is that a car that runs like the GS Stage 1 could still exist.” It was faster than the manual GTO and W-30 automatic of 1972, beating the latter by 0.8 seconds in 0-60mph times and by 0.4 second and 5mph in the quarter. Haddock’s 1972 Stage 1 exists only because a 1971 United Auto Workers strike delayed GM’s ‘Colonnade’ A-body replacements by one model year. Oldsmobile’s psychedelic advertising character ‘Dr. Oldsmobile’ was the spokesperson for the 4-4-2 which was a separate model from 1967 to ’71, it then became an option package on Cutlasses again in 1972. The ’72 facelifts were minimal, with chrome headlamp surrounds as on Bivins’ car on the ’71 Olds and Buick, flat black surrounds as on Haddock’s car on the ’72s, and tweaked grille meshes. Bivins’ Olds doesn’t have the two vertical pieces that split the tail-lamps into thirds like the ’72 models. Black rubber trim surrounds the tail-lamps on Haddock’s 1972 GS, but not on his ’71. The Olds is the epitome of Bill Mitchell’s organic ‘fuselage’ surfacing, with a large split grille and a sleek fastback with strong, muscular rear shoulders. The Buick is sublime with two small ram air intakes near the centre of the hood, where the W-30 has two gigantic golden scoops. Side surfacing is more creased, lending the GS a kind of abstract Coke-bottle shape.

Haddock has restuffed his driver’s seat, so you sit high in the Buick. Both tachometers are hard to read behind thin-rimmed steering wheels. The Oldsmobile’s tach is of the tick-tock variety, and Bivins’ car features a Hurst dual-gate shifter, with a separate gate for ‘manual’ shifting. It’s easier to simply set either Turbo-Hydramatic in ‘drive’ and put your foot to the floor. The steering in both cars has more play than a kindergarten gym. Neither has the kind of lean or wallow most contemporaries would display even on gentle turns. Though it feels slightly quicker, the GS has less squat and tighter, more refined body control. Those huge ram air intakes on the W-30 makes the Oldsmobile feel bigger from behind the wheel.

Its engine warmed, the W-30 starts immediately. The Stage 1 needs a quarter throttle. Haddock put ’70 Stage 1 10.5:1 pistons in his ’72 because… “Why wouldn’t I?” Both are stronger cars than other Seventies muscle cars, their power coming on strong at the mid-range with a NASCAR growl that would do a modern car proud. Don’t take my word for it. I ask Mike and Paul to trade keys.

“Are they going to be diplomatic or truthful?” Mike’s wife, Laurie, asks. Mike Bivins: “That one was right smooth going down the highway, smooth shifting. Seemed like it had a bit hotter cam. Good driving car. I didn’t stand on it because I didn’t want to have to buy Paul a new motor. It has more brakes.”

Paul Haddock: “I was surprised at the similarities between the cars. They both kind of feel the same. Set up the same. The hood feels awfully long on that W-30. I like the dual-gate shifter. I think Buick was playing to a more conservative customer. The Olds looks more aggressive.” Diplomatic indeed. “Well, we’re gentlemen, right?” Haddock says. “The Olds and Buick guys are gentlemen.”

PAUL HADDOCK bought the ’72 Stage 1, one of his three GS models, about 15 years ago. He repaired bodywork from front and rear window leaks, replaced the radiator support and battery box, rebuilt the engine and transmission and replaced a front fender that had a rusted-out support.

WHY I LIKE IT: “I love a Buick because it’s a sleeper. People just don’t really get it most of the time, and it’s got all the horsepower and torque you need.”

WHY IT’S COLLECTIBLE: “It was the underrated muscle car of the era. People are just beginning to understand what they really are.”

RESTORING/MAINTAINING: “Driving the car is the best thing you can do to maintain it. General use keeps the battery up and gas running through it; so use is your friend. ”

BEWARE: “If you want a true, investment-grade Stage 1, get the documentation that it’s a numbers-matching car. Make sure you have the correct engine, the correct transmission for the car. Guys drive a Stage 1 hard and blow a motor and throw another Buick motor in. Contact the GS club of America to check VIN codes. ”

THEN: “In the final analysis, Buick builds a pretty good car because, on top of everything else, it is quiet, smooth and rattle free.”— A.B. Shuman, Motor Trend, June 1972

MIKE BIVINS owns Tri Tech Incorporated, a handrail and metal fabrication manufacturer in Austell, Georgia (tri-tech-inc.com). He bought his W-30 in 2002, five years after he offered to purchase it from a fellow Oldsmobile Club of America member, and has since sold his first collectible, a 1967 Oldsmobile Cutlass Supreme sport coupe.

WHY I LIKE IT: “Its sportiness. I like that it’s a big-block car and a ram air car.”

WHY IT’S COLLECTIBLE: “Only 920 were made, and probably half are gone. It shows what GM could do 40 years ago and how advanced they were and when performance and sportiness were critical.”

RESTORING/MAINTAINING: “Drive it pretty regularly, especially with ethanol fuels. I use an additive to try to help with that. Change the oil regularly and an Oldsmobile engine will last.”

BEWARE: Clones. Local Olds Club chapters can help tell if you’ve got an authentic W-30. Its carburettors have unique jets. Bivins has even found ‘W-30’ stamped on the end of his car’s camshaft. “Buy one that’s all but done. You’re going to save money in the long run.” GM A-bodies are known for leaky front and rear windows.

THEN: “The car made top marks in standing start acceleration, though it couldn’t match the four-speeds in the passing range.” – A.B. Shuman, Motor Trend, October 1970

NOW: The 4-4-2 W-30 is a stylish Belle Epoch muscle car, a quick and refined step up from the Pontiac GTO