Getting off the fence 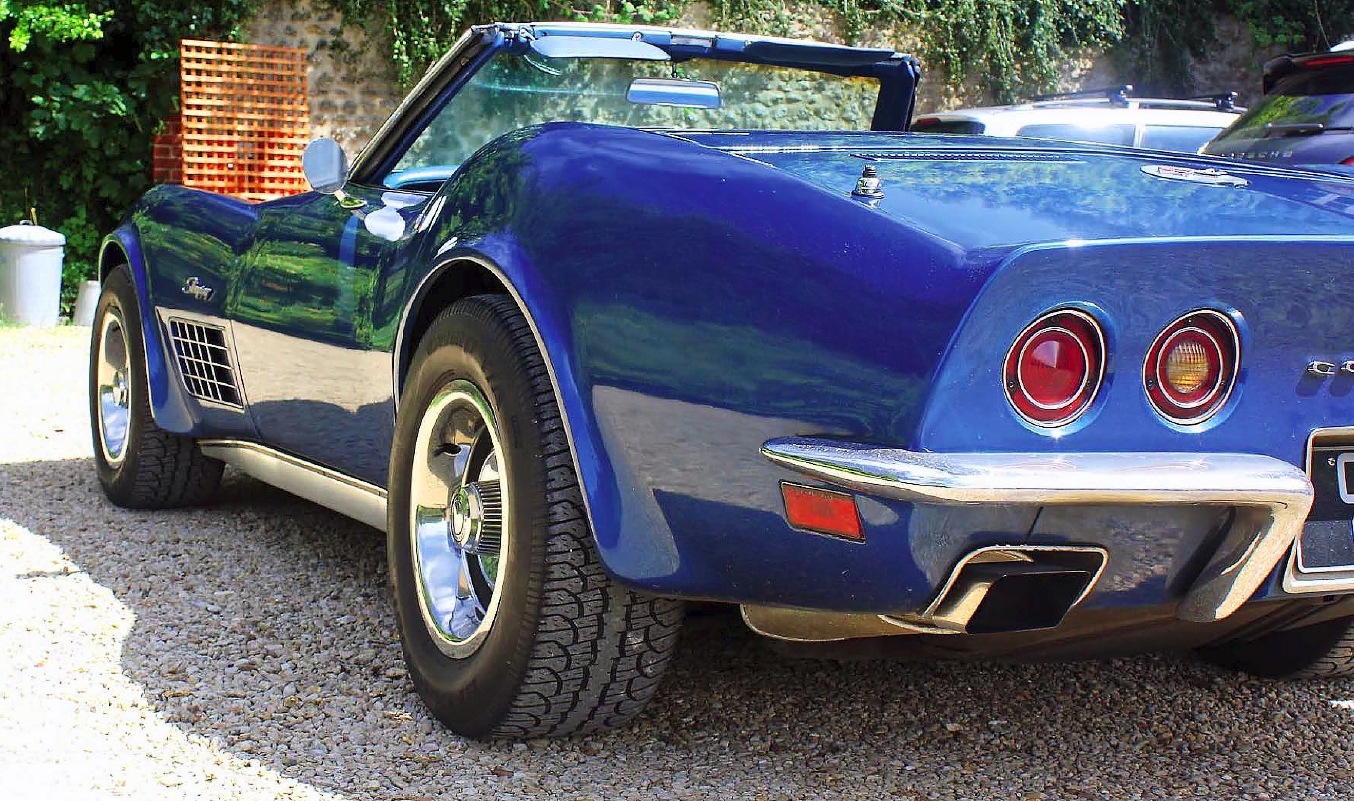 Getting off the fence! One of the directors of Drive-my publisher Cars Drive Media, has a dirty little secret; he’s a closet American car fan. Nigel Hole joins up with the team at Thunder Road Classics to exorcise the demon that has haunted him for nigh on 30 years. Does he really want to own an American classic?

Right, let’s get something out of the way from the outset; I’m a virgin and a 36-year-old one at that. I’m sure like many readers of CA I’ve watched the American car scene crest and trough over the years (I was circulation manager for Classic American 15 years ago when it was part of the Auto Trader Group).

Child rearing days and mortgages have stood in the way, not to mention the costs of ownership of my fantasy ride. With the additional hurdle of getting a significant purchase justified and cleared by the better half, I’ve never owned one. In fact the closest I’ve come is to look at myself reflected in the paintwork of many an owner’s pride and joy. Damn it, I want one.

My long held dream has always been to own a 1972 Corvette, Ontario orange, light saddle interior. Second choice would be a 1977 or 1978 Pontiac Trans Am in Martinique blue. I’ve even measured my garage just to see if I could house such beasts, but I’ve never had the cheque book to match these aspirations.

I don’t even know if once behind the wheel, I’ll actually enjoy it. After all, my driving experiences revolve around your typical euro- boxes, all of which do everything brilliantly, but give the driver what can only be described as an uninspiring period of ‘practical’ ownership.

That’s polite isn’t it? Then I found the opportunity to try before you buy so to speak. Thunder Road Classics is a company based in Dorset with an arsenal of American weaponry at its disposal. A 1965 and a 1970 Mustang convertible, a 1967 Camaro convertible and a 1971 Stingray convertible, all sporting appropriate V8 motors on board.

Trying a car, whether it’s the one you want or in fact just to experience a proper US motor risks less than 1% of what you could invest in a car. In other words if it’s not for me, I will have saved myself from a huge financial mistake on a similar scale to the Greek crisis! As you will all know, a quick drive in any would-be purchase usually involves a road test with the owner sat next to you making it very difficult to take an objective view.

And so the day dawns and in true Yankee style, collection is a very relaxed affair. Owner Matt Eaglestone informs me that the cars are more often collected early and delivered back late, he’s not constrained by timings. This is definitely not Hertz.

Matt’s objective is for the punter to have an enjoyable experience. Make no mistake, these cars work for a living, typically covering 300 miles per day when in use. Trailer queens they are most certainlynot. My pick for the day is the beautiful and curvaceous 1971 Corvette of course. It’s a compromise as I don’t actually want toown a convertible so I expect that the handling won’t be as crisp as a coupe, but that’s not a problem. I’m not looking to recreate the Pikes Peak record set by Sebastian Loeb last year!

Getting behind the wheel for the first time and acclimatising was a little daunting. This is make or break; if I didn’t enjoy it then my dreams would be in tatters and I’d have to join the Austin Allegro Owners Club instead! I kept the roof up initially and as luck would have it as the British summer did its best to wash me away as I left the garage. Out on the open road, my first thoughts were of hard work keeping this beast pointing straight, drifting over the middle line on some narrower roads was par for the course, with a feeling that I was in the driving gutter. I couldn’t get my shoulders to relax for perhaps the first 30 miles or so. This is someone’s pride and joy here, and I was tense to put it mildly.

Eventually the sun came out and the roof came off. A schoolboy grin appeared as for the first time, I could listen to the beautiful orchestral note of the twin exhausts. The burble bouncing around me off the hedgerows and buildings, it was just as I had imagined it would be.

Every time I depressed the pedal, I’d laugh thinking I’d buy this car just for the sound alone. I got closer in to Dorchester and there was only one thing for it, a drive up the high street. Now I’m not a show-off in any way, but this was my moment. A slight hesitation as the lights went green, just to raise the revs a little higher than normal and… let’s cruise.

There were fingers pointing, stunned faces, dads showing their lads and that was just the start. The next set of lights, a man rolled down the window on his Renault Clio; “Beautiful car, mate!” He kept the window down just to hear the sound of the V8 as I took off. I was really getting into this, but to my surprise and perhaps the only way I could sum up for the rest of the day was that the world happened at 45mph. I didn’t need to rush.

The classic late Sixties thin point steering wheel was easy to handle and more surprising was the fact that the Corvette handled beautifully. I expected a huge amount of over-steer, but everywhere I pointed her, she went and with the minimum of fuss. This was a driver’s car, snug in the cockpit; I was involved in every aspect of momentum. You just don’t get an experience like this in modern cars.

The automatic box was actually the best choice. I’d always thought I’d want a manual, but why bother? Stick her in drive and just go.

Are you an owner enthusiast then a businessman, or the other way round?

I’m a former Shell Oil executive who wanted to get out of the rat race. I wanted to own a classic car.

Where did the idea come from? Why American cars?

I thought maybe I could make ownership of a classic car pay. I bought the ’65 Mustang and the Corvette and thought I’ll give the hire business a go. American cars have just been a love of mine since I was a kid.

Are they easy and relatively cheap to maintain as almost daily drivers?

Parts are affordable and plentiful and I always replace, never refresh. I have all the safety things like brakes, running gear inspected and serviced by a local specialist garage.

Who’s been your most famous client?

Kylie Minogue used the ’70 Mustang in her last music video of 2012.

Have you had any horror clients?

Only one, a music company guy who I found out two months later had taken the Mustang to a beach and proceeded to doughnut it over and over again. It cracked the block.

Will you be expanding the fleet? If so, with what?

Every car has to pay for itself and four cars is enough for me at the moment but if I could, I’d buy a ’68 Barracuda convertible or a Dodge Challenger convertible.

Would a day behind the wheel fulfill the fantasy or shatter the dream? Centre console features instruments and period radio. Watch this space to find out if there’s a Corvette in Classic American’s car park!

The reason that the world happened at 45mph was in part due to the sensation of speed you get. It’s like being in an old MG or a Mini in that your derrière feels really close to the road, it felt fast, but wasn’t, and it didn’t need to be.

The brakes were of the non-servo assisted variety and if I had one mild criticism it was here. At slow speed it’s just not a problem but ‘slamming the anchors on’ in an emergency would be another matter all together. The clock was ticking, Matt’s place was an hour away but it was at this point that I really got to become one with the Corvette. Cruising, sunshine, roof down, at ease with all aspects of the car and it was at that moment I understood. I had a American car epiphany, I was hooked; I was cool, hip even. I had a car that red blooded males dreamt about.

There was one problem. I had to give it back. I pulled into the petrol station at Tesco, quarter of a tank to go, but brimmed it with super unleaded (Matt runs his cars on the higher octane juice). Just £50 worth and she was full; another myth exploded in my head. I don’t need to remortgage to run a small block.

Unbeknown to me, the chap filling his car next to me cursed as I returned to the convertible, he’d overfill his car by looking longingly at mine. I have to confess and I am slightly embarrassed, for all the comments made throughout the day I never once admitted the car wasn’t mine; I just lapped up the adulation! Back at Matt’s and I dolefully handed the keys back.  Is it the American dream for me? It’s an unequivocal yes. Right, I need a second job!

Where did your cars come from?

I bought them all in the UK although the Camaro came via Germany and Greece to the UK.

Are they numbers matching? Does it matter?

The Camaro and the Corvette are, the ’65 Mustang used to be and the ’70 Mustang we’re not sure. I don’t think my clients mind, it’s the experience they are after.

What does your maintenance schedule involve?

It’s governed really by mileage. I spend about 20 hours a week fettling the cars and checking them over and every time they go out, the essentials are checked of course. Oil is done every 3000 miles and then of course my local specialist takes care of all the essential work.

Do you have a favourite?

The last one I drove!

How many miles a year do your cars drive?

Do you have a dream car?

1968 Fastback Bullitt Mustang and yes, it would be in highland green!

The choice is yours!