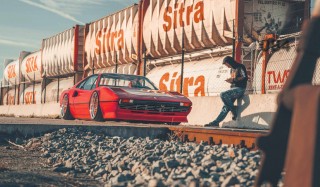 With a tube frame and separate body, it was actually a pretty simple thing, although it was complicated where it counted: the chassis boasted all-independent double-wishbone suspension and disc brakes all round, while the free-revving V8 was transversely mounted with a transaxle, all-synchro dogleg ’box and clutch-type LSD. The body was a gorgeous wedge, very appropriate for the mid-seventies; they were initially made of fibreglass (and early GRP cars can be worth seven figures), although construction swapped to steel from 1977.

At this point, we have to address the elephant in the room: Magnum P.I. You see, this 1980s TV show always, always gets brought up when people talk about Ferrari 308s. It’s like discussing the Reliant Scimitar at a classic car show – someone will say ‘Hey, did you know Princess Anne had one?’ literally every time. But Magnum P.I. has particular relevance here because, as you can see, the 308 flexing before our lens has Hawaii plates referencing the home of Tom Selleck’s character, Robin’s Nest. If you know, you know. (OK, the Magnum 308 was a targa-topped GTS, not a tin-top GTB like this one, but don’t be that guy…) 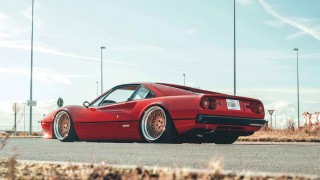 Now, given the buzz around this 308 on the show scene throughout 2018, you’d be forgiven for thinking this was a fresh and fashion-forward build pushed through the awesomeness-machine for the ’18 season. But in fact what you see here is the result of a painstaking 5-year restoration.

Andy Neirinck is the owner – actually from Belgium, rather than Hawaii – and he picked up the car back in 2013 as, “a good, not to say perfect low mileage car”. This whole endeavour also demonstrates that taking your time over things really does ensure impeccable results. This car’s been done right rather than done fast. It had its fair share of problems when Andy took delivery, ”I drove the car on special occasions and then decided to get rid of all the points that bothered me,” he explains. Andy’s hit list included the bad paint and wonky panels to sorting the oil leaks, but he was unfazed. He simply took the car apart until he was looking at what was essentially a big pile of Meccano, carefully labelled and organised everything, then drew up a list of what needed doing.

The idea of restoring a Ferrari may seem daunting to some, but it’s important to remember that for all the glitz and glamour, it is just a car. What’s more, it’s a car from before the era of nannying ECUs and complex electronics – you just unbolt things, repair or replace them, then bolt them back in. You don’t have to worry about jailbreaking the engine management system. You’ve just got to read up on how to balance four thirsty Webers.

All right, it wasn’t quite as easy as all that. The body had to be comprehensively straightened and perfected before being reshot in lustrous Rosso Corsa paint. While he was at it, Andy threw in a few custom touches to ensure this would be a Ferrari like no other; the 308 came with a subtle roof spoiler which he’s carefully deleted and smoothed away any evidence of, along with the wipers, front fog-lights and passenger mirror, replacing the driver’s side one with a carbon fibre item. 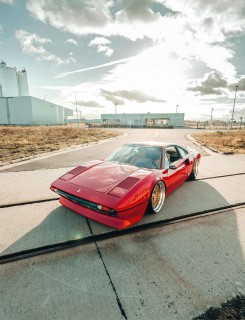 Looking closely, you’ll spot that the front and rear bumpers are also carbon fibre, carefully crafted to ape the exact dimensions of the originals. And naturally this undertaking was as much restoration as it was custom job, so every single nut, bolt, washer and seal has been renewed to make the car better-than-new. This is also true of the interior, where rather than radically overhaul things, Andy’s simply had the original seats retrimmed in sumptuous new leather, along with the doorcards, dash and centre console, with a new headlining above. It makes for a fabulous place to sit. And what of that rattly old V8 which refused to play ball? Quite simply, Andy stripped it down and rebuilt it. The block’s got new linings and bearings, the heads have new valves and springs, every single line, hose and connector has been renewed, and that all-important quartet of carbs has been rebuilt and properly balanced.

It’s at this point in the tale that Andy’s story veers violently away from Classics Monthly and into Fast Car territory. You see, it’s important to note that Andy isn’t just any old retro car enthusiast. The first two letters of his name are the last two in KEAN – as in KEAN Suspensions, the Belgian custom-shop powerhouse who know more than pretty much anyone in Western Europe about getting cars sitting on the ground on custom air-ride and hydraulic setups. Along with his brother Kenny, their work can be enjoyed at shows all across the continent, and has appeared in these pages quite a few times too. So with the 308 beautifully restored and tastefully customised, it was time for Andy to do what he does best and lay the thing out on the tarmac…

Using a new-old-stock set of OE-spec Konis as a base, he meticulously crafted a custom air-ride system   for the Ferrari, carefully massaging the arches to fit some scene-busting rims under there to complete the effect. The design had to be something fresh and contemporary, yet with a retro motorsport vibe, and he’s vividly ticked this box in choosing a set of 18-inch AL13 Heritage Series S20 wheels, with brushed gold centres and polished lips. The rears are a supercartastic 10.5-inch wide, which looks mean as hell from dead-on rear. And it’s impressive to note the fronts are 10-inch wide – that must be fun with the unassisted steering. All part of the drama though, isn’t it? The details of the chassis inevitably came in for a resto as all-encompassing as the rest of the car, with new anti-roll bars and wishbones joined by Powerflex bushes throughout, as well as new brake callipers and lines.

We could be glib here and say that Andy’s created the 308 that Ferrari should have made all along, but that’s not exactly the case. The idea of air-ride would certainly be anathema to the Tifosi, and we know that there are more than a few feathers being ruffled by this car among the stuffy Ferrari collectors. But what Andy’s achieved here is to take an icon of the marque’s history, lovingly restore the architecture and the details to better-than-new quality, then shake it up like an Etch-a-Sketch and create something that’s blown the Euro stance scene wide open.

We just can’t get enough of this car. Those five long years were time well spent.

Yeah, we can forgive some of you for not knowing what Magnum P.I. is – it was a popular TV show in the 1980s, but we appreciate we might be a bit more old and haggard than you guys! Magnum P.I. was a drama starring Tom Selleck (he of the magnificent moustache) who lived a luxurious lifestyle in the guest house of a huge beachfront estate called Robin’s Nest, in Hawaii. The owner of the place, Robin Masters, was a mysterious figure who was never seen in the show – he invited Magnum to live there in return for working as a private investigator for him. Magnum had free use of Robin’s Ferrari 308 GTS, and the two have been closely associated in popular culture ever since. So now you know!

What’s unique about KEAN? Because only Kenny and I work here, we can guarantee the finish and the personality.

Did you bag your dad’s Peugeot 607? That was Kenny! The first 607 to run Accuair E-level management…

Can we have a go in your Ferrari? No.

It really doesn’t get better than this. One word – perfection. Every single nut, bolt, washer and seal has been renewed to make the car better-than-new. Swish man, real swish.

“Andy’s taken an icon, restored it to better-than-new quality, then shaken it up like an Etch A Sketch”