Back in 1973 Keith Walker was in the market for a stylish but affordable coupé to replace his old Fiat 128. ‘I thought the Ford Capri and the Sunbeam Rapier looked too American and never even considered the MGB GT or Vauxhall Magnum,’ he says. One spring morning he passed a car dealer next to Watford railway station and remembers, ‘I feasted my eyes on a brand-new dark blue 124 Sport Coupé wearing Cromadora light alloy wheels.’ Keith knew instantly that this was the car for him but there was the slight issue of finances to consider. ‘Then I had a brainstorm a few months later – my stamp collection would have to go.’ And so, with the combined funds from the sale of Keith’s philatelic endeavours and the 128 plus a chunk of his savings, he was finally able to order a 124 1800 CC from Cole & Kirby of Kingsbury for £2200. 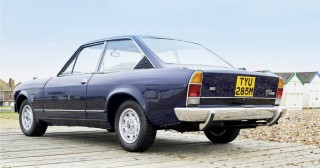 The car he took delivery of on September 9, 1973 closely resembled the 124 he’d originally seen in Hertfordshire, right down to its colour and alloy wheels. He says, ‘The reason for the delay in delivery was that I had specified optional tinted glass – there was a sixmonth wait for that – but the car turned out to be everything I had hoped for. The handling was outstanding and it was really exciting to drive hard. I loved the grooved aluminium dashboard panel, the comprehensive array of instruments and how the slim pillars made the interior feel so airy.’ Keith was rather less impressed with an issue familiar to many owners of Seventies Italian cars – corrosion. He says, ‘I had it Ziebarted in 1974, which kept rust at bay – but only where it was correctly applied. Unfortunately it soon became clear that the Ziebart gun had missed several places because I noticed rust patches appearing over the next few years.’

Keith’s 124 had other issues too. He says, ‘One of the opening rear side windows came loose from its catches and an incessant loud squeak from the clutch pedal was only cured when Fiat GB in Brentford replaced the cable. 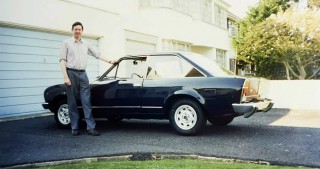 ‘More worrying was the occasion in 1979 when the brakes failed as I was driving down a steep hill in Chesham. Fortunately, there wasn’t much traffic about so I managed to bring it to a halt without hitting anything.

‘I had to replace all of the balljoints at least two or three times between 1978 and 1982 because the quality of the new parts was dubious – I can’t help wondering whether Fiat subcontracted them at that time.’

Matters finally came to a head one day in 1983 on the Leatherhead bypass. ‘I was driving the 124 fully laden with my wife, two children and mother-in-law on board plus luggage at about 40mph when one of the front wheels collapsed into a horizontal position. It was absolutely terrifying. I insisted on having new Fiat-made suspension pans fitted after that and have experienced no further troubles to this day.’

Keith moved to Worthing in 1980 but the bracing salt air clearly didn’t agree with the Fiat’s bodywork. He says, ‘The front wings had holes near the headlights, there was another one in the boot floor and a couple of the wheelarches were a little ragged. A clumsy driver also dented one of the rear wings, so I decided to take it to a local specialist called MB Motor Body Works in July 1982 for a bit of a refresh.

‘I received a telephone call from them two days later – and it wasn’t good news. Removing the front panels had revealed that the inner panels were rotten and the headlamp supports had been eaten away.’

Most owners in Keith’s position would have sold the 124 for parts at this point and considered the merits of a Mazda RX-7 – he wouldn’t have been alone because entire generations of rear-wheel-drive Fiats disappeared from Britain’s roads during the early Eighties – but Keith was not about to scrap what he maintains is one of Fiat’s most beautiful designs. ‘I dropped into the workshop every week to monitor the Fiat’s progress. MB had to order several inner panels but discovered that some parts were no longer available. They had to use repair panels and even craft new metal into shape. It took three months to restore the 124 before it was fully rustproofed and fitted with a rechromed front bumper.

‘I fitted a stainless steel exhaust in 1983 because the old one needed more and more work doing to it just to get through the MoT. It had a lifetime guarantee and is still on the car today.’

Job done, then? Not exactly – Keith discovered that the 124 was in need of further attention just two years later – this time inside the cabin. ‘The sun had split some of the dashboard panels, water leaks beneath the rear window had stained the shelf, it needed a new leather gearlever gaiter and the driver’s-side footwell carpet was badly worn. 124 Coupé spares were either unavailable or unaffordable during the mid-Eighties but I managed to find a scrap car with a good interior, which yielded a new dashboard, carpets and armrests. I also had a new gearlever gaiter made up by a local trimmer and the parcel shelf repainted.’

Then Keith found yet more corrosion breaking out a year later. ‘There were one or two rust spots under the driver’s door but more repair work and a respray brought it back up to 100 per cent perfect condition. I had the brightwork rechromed at the same time and finished it off with a new bonnet badge, ashtray and interior mirror.

‘It was at this point that I decided to semi-retire it and buy a Fiat Strada as my everyday car. The 124 had been our only car for 13 years but my plan now was to use it only at weekends, and I usually took it to the Italian Car Days at Brooklands.’

And so it continued until Keith retired in 2010. ‘I had to make a decision about the Coupé’s future because getting it up to the sort of condition I really wanted was clearly going to take quite a bit of work. I took it to DTR Sports Cars because I’d known about them for quite some time and really wanted a 124 specialist to give me an idea of how much it was going to cost me to bring the mechanicals and electrics up to scratch.

‘Then there was the bodywork – the bottom of the driver’s door was rusting badly yet again – and DTR discovered that the Fiat also need rewiring and welding, new front brake calipers and brake hoses, a replacement water pump and alternator, new gearbox support mounts, a tension bearing and a cambelt.

‘DTR’s initial quote for the work was £3700 so we had to decide whether to pay to have the work done or scrap the car. At the finish it was a no-brainer – we considered the car to be a part of the family so somehow we managed to find the money.’

The work didn’t end there, however. ‘I had it resprayed yet again in 2011, fitted a new set of tyres, had the upper and lower wishbones, ball joints and bushes, springs, dampers, track rod ends, centre drag link, rear upper and lower axle location bars replaced and fitted a new three-piece clutch kit.’ By August of that year costs had spiralled to a further £10,500 and Keith spent a further £4300 the following year on a full leather interior retrim, a new set of carpets and a replacement radiator.

The result of all this work is almost certainly Europe’s finest Fiat 124 Coupé and a car that’s easily mistaken for Italian exotica. Says Keith, ‘I was recently approached at a petrol station by a young-looking chap who genuinely thought it was a Ferrari.’ 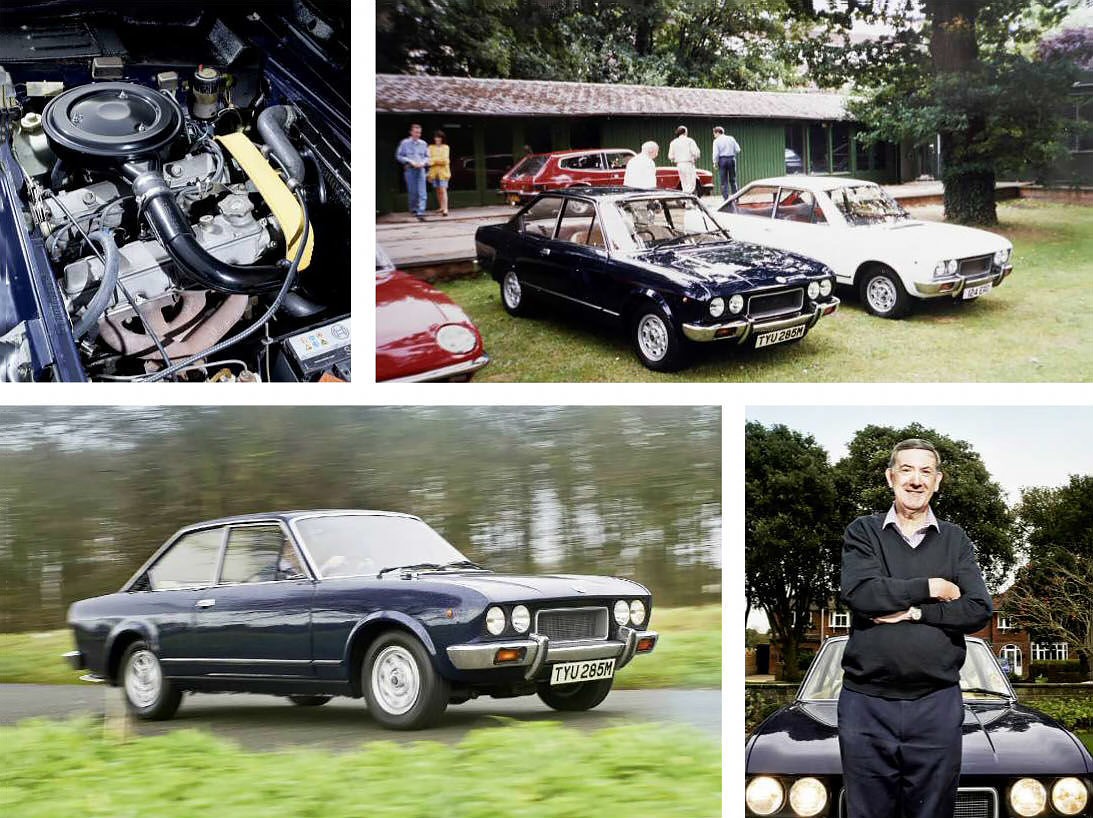 ‘I was recently approached by a young chap who genuinely thought it was a Ferrari’. Twin-cam 1756cc treated to a new radiator in 2010. Red, white and blue on show on Italian Car Day, Syon Park, 1991.  Keith says he’ll never sell his 124 Coupé.  Fiat fitted a rear anti-roll bar to keep the CC’s handling fresh.

And with that, he offers me a drive. I feel a great weight of responsibility as I step behind the wheel and await his instructions. ‘I hardly ever use first because it’s a very, very low gear,’ he says. ‘There’s no need to use it unless you’re driving up a very steep hill.’ In fact, the Fiat is so responsive that it feels like it would easily move off in second or even third gear. It darts effortlessly through modern-day traffic, the large glass area making it feel rather small and vulnerable compared to ‘compact’ modern hatchbacks, but also affording excellent allround visiblity. And yet the combination of the stylish leather interior and the fizzing sound emanating from the engine bay puts me in mind of Rossano Brazzi’s Roger Beckermann driving that Lamborghini Miura in The Italian Job’s opening credits.

The reaction of passers-by to Keith’s 124 is frequently one of mild awe and surprise when we tell them it’s a Fiat. The car that was aimed at up-and-coming middleclass professionals in the Seventies appears to be almost unattainable elite today, but Keith still uses his 124 as a second/weekend car and maintains he’ll continue to do so for many years. ‘It’s not exactly quiet at speed – you can’t hear the radio beyond a certain point, put it that way,’ he says. ‘But I actually prefer the sound of the engine and the stainless steel exhaust note is just wonderful.’

Under the knife at MB Motor Body Works in Worthing, 1982. On parade in 1990 during Italian Car Day at Syon Park.

With both driver and car now fully retired from the daily grind, does Keith have any further plans for the car upon which he’s lavished so much time and money over the years? ‘There’s a sense of just being conveyed in modern cars,’ he says. ‘You never really feel a part of the action. But you always feel like the Fiat really wants you to properly drive it.

‘For that reason alone, I’ll never sell it.’