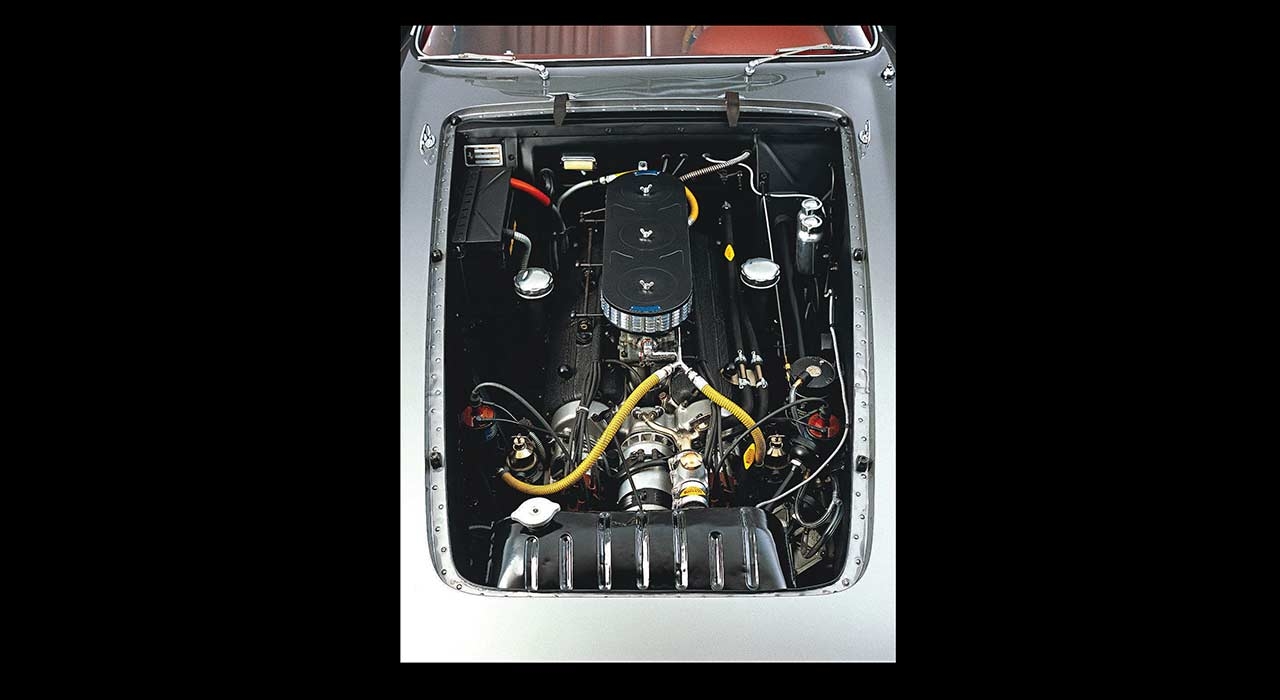 The Ferrari V12 Story Enzo was never going to make do with anything less. Here’s why. The power of 12. All the greatest Ferraris have had 12 cylinders. Ever wondered why? Words John Simister. Main Photograph Michel Zumbrunn.

FERRARI V12 SPECIAL THE ENGINES / THE V12 STORY  How Ferrari’s V12 evolved, and the cars it powered…

That his cars should be powered by a 12-cylinder engine was as obvious to Enzo Ferrari as the notion that night follows day. He wrote about it in the first edition of Caratteristiche tecniche dei motori Ferrari realizzati dal 1946 al 1985. ‘When I began,’ he said, ‘against everyone’s advice I wanted a 12-cylinder engine and that engine, which many people expected to put an end to my ambitions, is still recognisable in its numerous sons and grandsons. I have tried them all, eight-, six- and four-cylinder units, but I keep returning to the 12-cylinder, which remains my favourite.’

Enzo has gone but the fixation with 12 cylinders remains, even in the face of today’s pressures against automotive profligacy. All those pistons and valves! All that friction! Yes, but what sound, what smoothness, what richness of motion…

Jean-Jacques His, architect of Ferrari’s current engine range, neatly encapsulates what lies behind the appeal: ‘The first quality we would expect from a V12 is smoothness. You can have high power and speed with a very short piston stroke and very little vibration. If you use the right firing order you have a unique combination of power and smoothness. Yes, it’s expensive, it’s a bit longer than a V8 and it’s heavy, but it’s the best compromise for smoothness in a road car.’

Those 12 cylinders don’t have to be in a vee formation, although nowadays they are so disposed just as they were at the start. Some of the best Ferrari engines have been flat-12s, although logically if not sensibly you could describe such an engine as a 180º V12. Today’s most advanced Ferrari V12 engine, as fitted to the new F12 (see next feature), makes 730bhp at 8250rpm from its 6262cc, and it has a vee-angle of 65º rather than the mathematically ideal 60º – a typical Ferrari bending of the rules, first enacted on the V6 Dino engine simply to make more room for free- flowing inlet ports. The 5″ ‘error’ is small enough not to matter much, and any small decrease in refinement adds to the Ferrari’s blustery character. Back in 1946, the first Ferrari engine’s figures were very different. Revealed at the end of that year, it was a 1496cc, 100bhp V12 with that 60º vee-angle for perfect mechanical balance and a remarkable 7000rpm rev limit. But while this was the first Ferrari engine, it wasn’t the first time that its designer, Gioachino Colombo, had worked with Ferrari, the man. Colombo was the protegé of Vittorio Jano, designer of the Alfa Romeo 6C 2300 engine among other masterpieces, and Ferrari ran Alfa Romeo’s pre-war racing team before setting up on his own post-conflict. Colombo’s 1946 design powered the first Ferrari, the 125S open sports car. Multiply 125 (the cylinder capacity in cubic centimetres) by 12 and you get 1500cc, this engine’s approximate capacity. It triggered a model-naming system that remained sacrosanct until the early 1970s.

Since then, there have been 12-cylinder examples right through Ferrari’s history. During the first 16 years of that history Ferrari was alone as a maker of V12s, the Colombo design evolving through the 1950s and 1960s and scoring nine Le Mans wins between 1959 and 1965. Two second places, with the 330P4 in 1967 and the 312PB in 1973, completed Ferrari’s works-run Le Mans successes, the latter with a flat-12 engine derived from the contemporary F1 unit.

Such a small-capacity V12 as that 1946 original sounds like massive over-complication, but tiny pistons and a very short stroke meant it could reach very high revs and produce a lot of power – especially if supercharged, as it was for Formula 1 racing. Most remarkably, that same basic cylinder block was used right through the engine’s gradual capacity increases, right up to the 3.3 litres of the 275-designated cars, including the 275LM that won Le Mans in 1965. Only with the final stretch to four litres and beyond, for cars with 330, 365, 400 or 412 in their model numbers, did the block grow a little longer. Colombo’s engine has powered most of our favourite earlier Ferraris, cars such as the 250GT, 166 Barchetta, 250LM, 275GTB, 250GTO and the Testa Rossa, with its crackle-red cam covers. That one with the ‘red head’ was the first normally aspirated roadgoing engine to make (almost) 100bhp per litre.

The line continued right up to the 412 models of almost five litres, but by then the Colombo links were loosening. The cylinder heads had carried twin overhead camshafts since 1966’s 275GTB4, for example, and by the end this engine family’s cylinders had grown significantly bigger than those of Ferrari’s other 60º V12 family, the large- block engine designed by Aurelio Lampredi and first seen in 1950. Again, that one did duty in road cars (notably the Superamerica models), sports racing cars and Grand Prix cars alike.

This new flat-12 became the sole roadgoing 12-cylinder Ferrari engine after the demise of the V12-engined 412 saloon, later powering the 512 BBi and then the Testarossa (one word this time) and its derivatives. So it remained until 1992’s launch of the front-engined 456GT, which reincarnated the spirit of Ferrari’s V12 roots.

Here, we can look to Ferrari’s 1988 Formula 1 engine for influence. Current Ferrari engine supremo Jean-Jacques His was the chief F1 engine designer in 1988, when turbocharging ended and naturally aspirated engines returned. Unlike today, teams could use as many cylinders as they liked up to a maximum of 12 to create a capacity up to 3.5 litres. Ferrari, of course, went for the full 12 cylinders. The fabulous V12 scream, undamped by turbocharging and enhanced by sky-high revs, was back on the agenda. Most of us would like Ferrari’s F1 cars still to be V12-powered, but today’s rules seem bent on uniformity. A sad loss. The significant link with the new generation of V12 road-car engines that was to follow was that breathing-improving 65° vee-angle. ‘It’s an angle that is quite acceptable,’ His explains. ‘The five-degree offset we use in the crankshaft’s throws to give even 60° firing intervals is not a big one. The engine effectively functions as two in-line six-cylinder units, so even intervals are more important. The vibration difference is so small it does not matter; the performance is what counts. But it has a small influence on the noise, generating some low-frequency harmonics.’ A bit of added soul, in fact.

This is the engine that was also used in the Ferrari 550, 575 and 612 in varying forms – but it is not related to the latest V12, which began life in the Enzo supercar, uses chain drive instead of belt drive for the camshafts, and has a different bore and stroke in a new cylinder block. Only the number of cylinders and the 65° vee-angle are the same. In detail design it is closer to the current V8 than to the earlier V12; as used in the 660bhp FF ‘shooting brake’ launched last year, and the new F12, it even has the same 94mm cylinder bore.

In the Enzo, today’s V12 was a specialised unit built almost as though a racing engine. In 2006, for the 599GTB, it was ‘industrialised’, as His describes it, with every component redesigned for (relative) quantity production. It has steel conrods instead of titanium, and the coolant flow through the cylinder heads is altered to suit the needs of a front engine instead of a mid-mounted one.

A high-pressure pump actuated the Enzo’s variable valve timing, as it did in the V8-engined 430. All Ferrari’s current cars simply use the engine’s own oil pressure for this. And then there’s the crankcase breathing system, an area of intense endeavour for Ferrari given the high- revving engines and large potential power losses through crankcase windage (the churning and splashing of oil and air in the crankcase).

The 458’s V8 was the first to address the problem thoroughly, with a clever system to minimise it by using separate scavenge pumps, needed for the dry-sump lubrication system, for each set of crankcase volumes: the linked pair in the middle, and one for each end. The pumps are configured to suck each time the air in the crankcase would otherwise compress, so eradicating power losses otherwise caused by unwanted air movements. It’s highly ingenious – but the V12 has to do it slightly differently.

The 458 system can’t be applied to the V12 because there are six different crankpins and a different set of volumes. Instead, every compartment of the crankcase is separated from the others and linked to a single scavenge pump via reed valves. It’s the same idea achieved differently, and it makes a significant difference. The HGTE version of the 599 was the first to use it, and it’s the main reason why the 599’s officially rated CO2 emissions fell from 490g/km to 415.

In standard 599 form, then, the engine produces an impressive 620bhp from its 5999cc and a full- throttle, full-revs bellow to match – it’s an engine that no legislation has managed to stifle. But just as the 430’s V8 developed into the direct-injection unit used in the California and the 458, so the V12 has had to evolve in order to meet new emissions legislation while still behaving as a Ferrari V12 should. So the FF, which has replaced the 612 Scaglietti and is the first Ferrari with four-wheel drive, has also gained direct fuel injection in line with the V8. Nowadays these naturally aspirated Ferrari V12s have usefully more bhp per litre than even that milestone Testa Rossa engine, and they use a lot less fuel while producing it.

Justifying a mad V12 in today’s environmental climate has never been trickier, but with the help of hybrid technology (as revealed two years ago in an experimental 599) even a V12 Ferrari can be slightly green-tinged. Some future Ferraris may have downsized engines and turbochargers, but as long as pulses beat in Maranello there will be, somewhere in the range, a full-fat, naturally aspirated V12. Enzo Ferrari can rest easy – and the proof is just over the page.

‘As long as pulses beat in Maranello there will be, somewhere in the range, a full-fat, naturally aspirated V12’