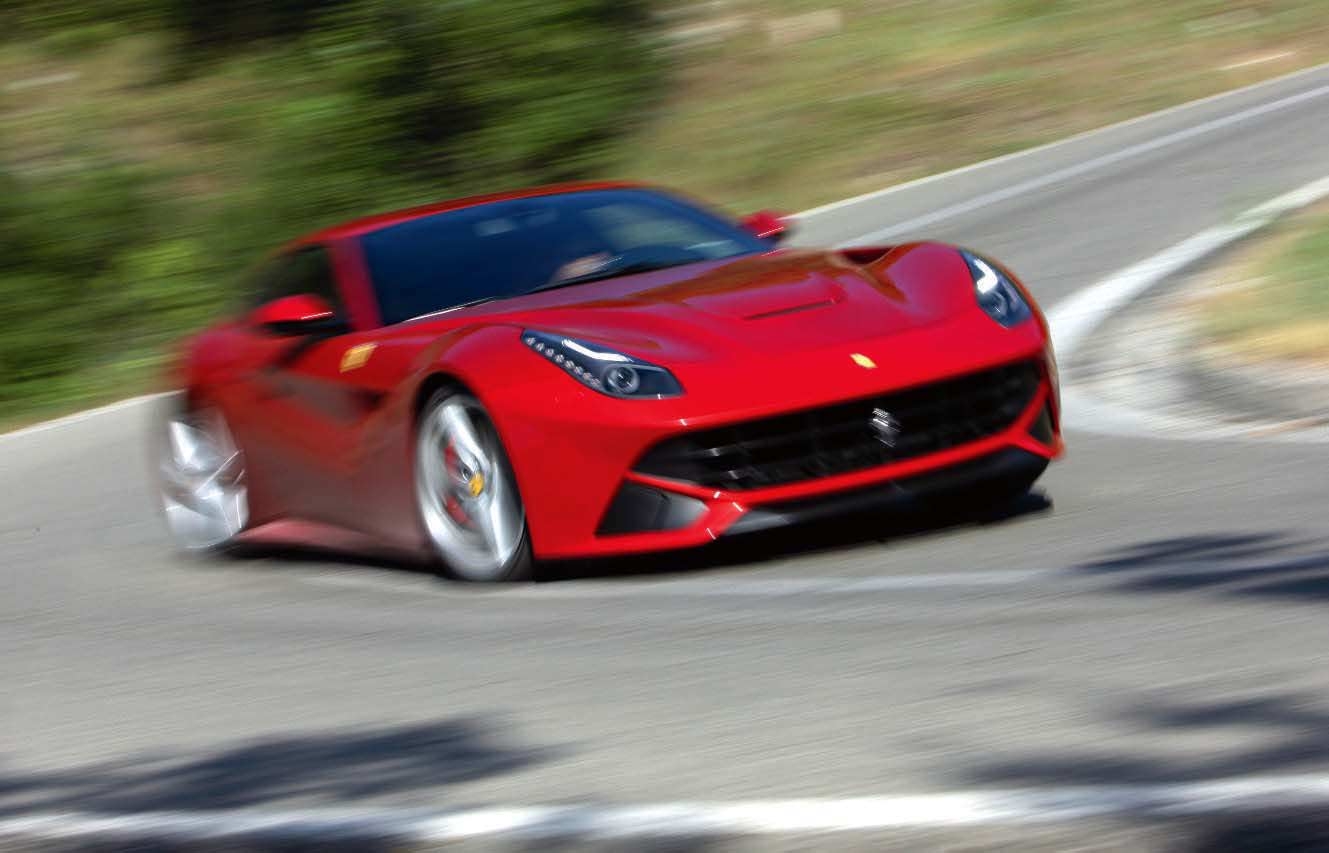 The Modern Traditionalist. Ferrari’s latest front-engined V12 GT is traditional in layout – yet it’s also one of the most advanced cars on the planet. Words Andrew English. Photography Roberto Carrer.

Seven o’clock in the evening and it’s 95 degrees in Maranello, home of sumptuous cheese, ham, vinegar – and Ferrari. Outside The Planet, an unprepossessing joint opposite the old Ferrari works, there’s something in the air, and it isn’t just the sulphurous heat. A portly American puts out his stogie, which the label tells us is the finest Cuban Cohiba; that’s a 65-buck smoke and they’re banned in America. Alongside him, a Chinese internet squillionaire stubs a fag of indeterminate parentage. The loaded guys are in town.

The big game here is getting a handle on the F12, the latest in a lineage of big GTs running back to the dawn of the company 65 years ago, through the Colombo-engined 1964 275GTB, the 250 series, the 1968 365GTB4 Daytona and, more recently, the 1996 550 Maranello. It’s the Maranello that’s being replaced here, or at least the last of that family, namely the £212,096 599GTB Fiorano and its rude sister, the £299,950 GTO. The new £239,736 F12 shows Ferrari’s touching faith with the notion of the front-engined V12 gran turismo, but it’s more than that. Somehow, Ferrari thinks its new GT can rival the dynamics of a mid-engined V8 sports car like the 458 Italia, although given that 20% of F12 owners will use them as everyday cars, this hypothesis was leaking below the water line before it left port. ‘For years we have been trying to understand how to make a front-engined car feel like a rear-engined car,’ says Roberto Fedeli, the project’s technical officer. ‘We have constraints here: CO2 emissions mean we have to make the power match the legislation and this is not just a track car, so we need space inside. We tried to transform the 599 to match the emotion of an eight-cylinder, but while we kept wondering about the limits of a front-engined car, even with the GTO, we couldn’t change the 599 chassis of that time. But now we have.’

So what have they done? Spent time at the aluminium smelters. The all-aluminium spaceframe and body are made of castings, stampings, extrusions; no fewer than 12 separate aluminium alloys, welded, bolted, riveted and glued. It banjaxes the idea that high-tech sports cars should be made of resins and carbonfibre. The F12’s body-in-white is 112lb lighter than the 599’s.

‘We could even have had some thinner material in the firewall,’ says Franco Cimatti, structural technical director, ‘but the sound engineers said they would have to put more noise isolation material in, which would outweigh any weight savings.’

There’s a virtuous circle of engine and transmission development (so bulky start-up catalysts have gone) and chassis strength (so no torque tube), which has allowed a much narrower transmission tunnel, which permits the engine to sit lower and further back, the scuttle to be lower and the seats to be lowered and further forward. At the rear, the seven-speed, twin-clutch transaxle and smaller fuel tank sit nearer the rear firewall, so not only does the F12 have a lower centre of gravity but its major masses sit nearer the centre. Weight distribution is improved to a ratio of 46:54 front:rear. Compared with the 599, in old-fashioned money the F12 is, at 181.8in long, 1.8in shorter.

Ferrari’s Scaglietti plant builds the body, the design is Pininfarina’s, yet this car is made up of beautiful bits that don’t add up to a beautiful whole. A rehabilitation of the aerodynamic work of Dr Wunibald Kamm gives a lovely duck’s tail to the fastback rear, but it doesn’t sit easily with the strange geometric rear foglamp, echoing that of the Formula 1 cars. Why?

The front brakes are cooled via grille ducts, which open according to the rotors’ temperature. And those strange ‘air bridges’ at the back of each front wing were designed to channel air off the bonnet and onto the sides of the car – or were they? Two stories emerge. First is that it was a suggestion from Pininfarina as a styling conceit, which turned out to work in the wind tunnel. Second is that chairman Luca di Montezemolo suggested the car needed ‘a little something’ to make it more distinctive but, being Ferrari, they didn’t go to the design department for suggestions, and rang engineering instead. In profile this is one of the classic Ferrari GTs and the rear three-quarter view is wonderful, but the same angle from the front looks gargantuan rather than svelte and harmonious.

The closed-deck, dry-sump block has sealed crankcase chambers for each opposite pair of pistons, which reduces pumping losses and windage. Ventilation is via steel reed valves in each chamber and oil is scavenged via four pumps, with a variable-geometry main oil pump to to reduce parasitic losses. The combustion ratio is a scarcely believable 13.5:1, maintained with close control of combustion and multi-spark ignition, which generates three sparks of different duration and intensity in quick succession. The big numbers are a peak output of 730bhp at 8250rpm, with 509lbft of torque at 6000rpm, although the unit will scream to 8700rpm.

To protect the moving parts there are minute crankshaft counterweights, micropolished camshafts, graphite-coated pistons and diamond-like coatings on the valve tappets. On top of the engine are elongated plenum chambers, like a pair of red, crackle-finish ant-eaters. Top speed is 211mph, 0-62mph is despatched in 3.1sec and (provided you buy the optional start/stop system) you might see a small proportion of the claimed 18.8mpg.

Start her up and the unit gives a quick burst of revs, but settles to an even idle. There is no conceivable reason why a car needs 730bhp for the road and sheer power dominates the driving experience like a bear in a box. It’s a measure of the power overload that, out on the road, at medium speeds in auto, you rarely see more than 2000rpm. Let it rip on the track though and this is a hellzapoppin’ device. That big nose monsters up the straight and hurls you into the first hairpin.

It’s ‘always giving you more’, says Raffaele de Simone, Ferrari’s test driver. He’s right. Hold the gears to the redline and the exhaust spalls off the Armco, ripping, bellowing, stentorian and very special. And the engine’s linearity is astounding. Acceleration feels as violent at 40, 100 or 150mph and you thank your stars for the brilliant twin-clutch transmission and fixed steering column paddles, because there are plenty of other things to occupy your mind. It’s so simple to go very, very fast that you have to concentrate like a tight-rope walker as everything happens so quickly.

The quick steering is a debatable device. Old-school hydraulics power it, it has a faster ratio than the 599, and it’s certainly linear in response, but that response is almost too quick. You get used to the merest flick of the wrists required to turn the nose in, but there’s no transition except a slight dipping of the front wheel as the body heels. One second you’re expecting more nose- on understeer than you are getting, the next you’re going bigtime sideways. Again, electronics mitigate a tendency to visit the scenery, with the steering-wheel manettino (a sexy Italian name for ‘switch’) dialling damping, electronic stability and traction control between Wet, Sport, Race and a progressive switch-off of everything. While it’s easy to imagine you are one of the greats behind the wheel, in everything-off ‘workshop mode’ you’ll suddenly understand the precise impact of 730bhp on foot-wide Michelins, which suddenly have all the adhesion of slippers on polished parquet.

There’s still a chassis balance and, as de Simone points out, the electronic differential is trying to help you, but you’ll feel like a 40-watt Fangio.

I imagined the conservative cabin was going to annoy me more than it did. I’d certainly question why one of the most advanced cars on the planet requires gimcrack carbonfibre trim in the cockpit, reflecting the sun cruelly into your eyes. But importing the 599’s style means the major controls are simple, with clear priorities. The driver gets a comfy and supportive seat, a big steering wheel and a massive yellow-faced rev counter; why have more? So what if the sat-nav gets itself confused, the air-con controls are tiny and fiddly and there are loads of haphazard, almost hidden functions down near your knees? The F12 is about driving, capisce? Yet it also carries stuff, with a generous 320-litre hatchback space extending to 500 litres if you fold into the rear parcel shelf. There’s even a ski hole, which presents the scary prospect of 730bhp on ice. Dial back the damping and the engine response and it rides tolerably as well. Electronics really do give this car two distinct natures.

As for Fedeli’s rhetorical question about whether a 1.6-tonne, front-engined GT can be as agile as a 1.46-tonne, mid-engined sports coupe, it seems irrelevant after driving the F12. Customers for this car are looking for daily driving potential with raw performance, good manners and practicality. That the F12 moves the GT’s dynamics closer to those of a mid-engined car than any rival is a cause for celebration, but it really doesn’t matter. What matters is the glorious irrelevance of 730 horses and as much slippery fun as a family of otters in your bath. The F12 is by no means perfect, but aren’t you glad they made it?

Top left and above Swathes of leather clad an interior whose main purpose is to move two people as quickly as possible; exterior styling is as dramatic as you’d expect, but is it beautiful? Above and left Our man English loved the F12, but could have done without the cockpit’s ‘gimcrack carbonfibre trim’; turn the red manettino (switch) to the Everything Off position and you will easily get the car sideways – deliberately or not.