If you thought the Ferrari marque might have been getting a bit ‘louche’ in the 1980s, the F40 thundered in to pummel those qualms into oblivion. Born out of the abortive 288 GTO Evoluzione Group B racer, the Ferrari F40 is perhaps the purest, most focused supercar ever built. It’s certainly one of the most desirable. Launched in July 1987, it was given the ‘F40’ moniker to commemorate the company’s 40th birthday. 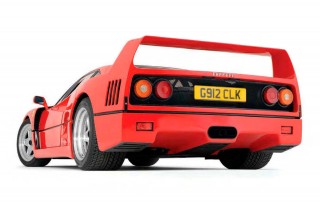 Significantly from a historical perspective, this was also the final Ferrari signed off by commendatore Enzo himself, before his death in 1988.

The F40 rivalled the Porsche 959 as the world’s fastest and most appealing 1980s supercar. In contrast to the technology-laden Porsche 959, the Ferrari F40 was a stripped-out, lightweight, old-school machine with almost no driver aids. It was probably also the first production road car genuinely capable of exceeding 200mph.

The F40’s chassis was a wider version of the 288 GTO’s tubular steel frame – no great change there, then – but the bodywork was pioneering in that it was made entirely of composites, namely Nomex, Kevlar and carbon. There were eleven panels in all, including massive one-piece front and rear sections. Even the rear screen was composite (an iconic vented Plexiglas screen).

Whereas the 512 BB and 288 GTO had been gracefully elegant in looks, Pininfarina’s design for the F40 was overtly aggressive. This massively wide car had a huge road presence, from its pop-up headlamp front end to its super-sized rear wing. But it was all about purpose: essentially this was a competition machine turned road car. 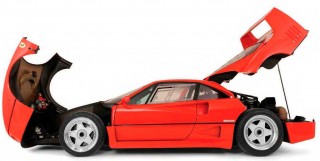 The stripped-out racer theme continued inside the F40, with ultra-focused race-style seats and virtually no concessions to luxury. So you got no radio, no carpeting, no leather and almost nothing covering the bare carbon interior (just felt for the dash, centre tunnel and roof lining). You did get air-conditioning, though, to keep that hot cockpit cool.

The F40 was not Ferrari’s first turbocharged car – the 288 GTO had already burst that bubble – but the era of turbos was still quite new for Maranello. Ferrari did get the turbo power thing spot-on, though, using a slightly larger (2.9-litre) version of the V8 engine seen in the 288 GTO. With two turbos strapped on, peak power was a mighty 478bhp. Weighing only 1100kg (dry), the F40 could do 0-62mph in just over four seconds, faster than pretty much any other car before it. 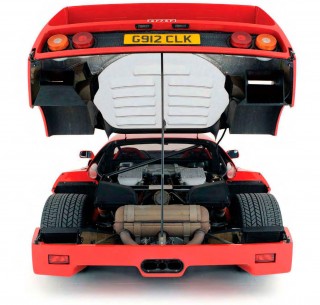 At launch in 1987, the F40 was priced at £160,000 – the equivalent of over half a million pounds in today’s money. Between 1987 and 1992, there was very little in the way of development, the only real changes coming in 1991 when catalytic converters were fitted and adjustable suspension was offered as an option. A total of 1311 F40s were built over five years, all painted in Rosso Corsa and all in left-hand drive (apart from seven RHD cars specially built for the Sultan of Brunei in grey or yellow). Around 600 cars were sent to the USA to a slightly different specification to European ones, including aluminium fuel tanks in place of rubber ones, a black rubber chin spoiler and side marker lights.

The F40 is a raw, exciting and frankly intimidating supercar. It’s unwieldy to manoeuvre and difficult to see out of – but as supercar experiences go, this is right up there with the very best.

The engine only really gets going once the turbos spool up at around the 3500rpm mark. Once into their stride, they provide a truly mighty kick, but unlike many turbo powerplants, this V8 loves to rev, with a red line set at 7800rpm.

The sound is a heady mix of V8 burliness, exhaust scream, turbo whoosh and wastegate chatter. This is a ‘hard’ car in so many respects. The suspension is ultra-firm, revealing every minor imperfection in the road surface. But that means almost no body roll and the grip from the enormous 10 x 17 rear wheels is towering – although not quite physics-defying. Hoof the accelerator pedal firmly when exiting a bend and you have to remain alert to the feel of the turbos kicking in, for when they do, the rear wheels can lose traction in an instant (and there’s no traction control to save you). In the wet, you’d better be either ultra-cautious or highly skilled…

The steering feels a little vague at around the centre position but once you’re into a corner, it’s full of feel and feedback. Like many supercars, you get a bit of kick-back if you hit a mid-corner bump, and there’s also a tendency for the car to tramline.

The gearchange quality is ultra-mechanical to the point of being brutal, while the clutch is pretty heavy – all very old school. If there’s a fault with the F40, it’s the brakes. The pedal requires heroic levels of pressure and repeated use (for example, hooning around a track) can result in significant brake fade.

Fundamentally, the F40’s 2.9-litre V8 is a tough engine whose internals appear to be very robust. There should be no oil leaks; check the cam covers and turbo pipes especially. If you do suffer a problem in the engine department, it’s most likely to be an electrical one. The F40 was one of very few cars to use Weber-Marelli engine management, and tracking down a good specialist with experience in this can be a challenge. As the engine is eminently tuneable, many cars have received some sort of upgrade over the years, notably to the turbos and fuel injection, but these days it’s considered wise to return the car to its original spec. The turbos do get very hot but they are fairly simple to overhaul if you do encounter a problem, normally revealed by a lot of smoke and/or noise. Note that post-1991 cars have catalytic converters fitted. Expect a new exhaust system to cost from around £3000 fitted. 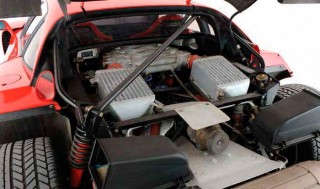 The F40 has rubber fuel cells (except for US cars, which have aluminium tanks). These rubber tanks need to be replaced every 10 years at an eye-watering cost of £12,000 a time. The factory fuel pump is prone to cracking and leaking fuel, so is often replaced with a more robust one. Not using the car for long periods is common, which can result in leaking seals, clogged injector nozzles and cooling system corrosion. The differential is mounted on the back of the engine in unit with the five-speed all-synchromesh gearbox (a non-synchro sports ’box was offered as an option). The gear change can be rather notchy when cold, but the transmission seems to be very robust in service. Clutch life varies greatly depending on use, but is unlikely to exceed 20,000 miles. You might experience loss of pressure in the clutch due to a chemical reaction in the fluid, so consider switching to a non-reacting fluid. A replacement clutch is around £4000 fitted.

Rebuilding each damper costs around £300. The split-rim five-spoke Speedline single-nut alloy wheels have a tendency to weep air from the tyres, which can be a hard problem to fix. The fixing bolts can also corrode. The Pirelli P Zero tyres cost around £500 each for the super-wide rear ones. The weak standard brakes are often uprated by owners (Brembo upgrades can be used with the standard 17-inch wheels). New brake pads cost around £600 per pair, while new Brembo front discs are more like £1000 a pair. 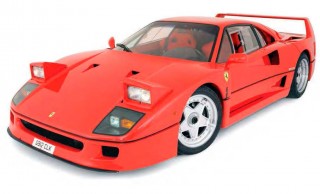 The F40 uses carbon-Kevlar body panels, the weave of which should be visible in the paintwork. If not, the car has probably had a respray. The underside of the body panels was left unpainted by the factory. Repairs to damaged panels are extremely expensive, so check the bodywork carefully. Commonly damaged panels include the nose section and underbody area (some owners fit scuff plates to protect this). The front splitter is also prone to damage.

As standard, the F40 has winding side windows but some early cars have race-style Perspex sliding windows, which tend to scratch easily. Check also for faded, milky Perspex rear quarter-lights and rear screen; these are very expensive to replace.

All F40s were supplied with red cloth seat trim which is very easily damaged, and tricky and expensive to replace. The carbon inside the cabin should be inspected thoroughly for damage, too. 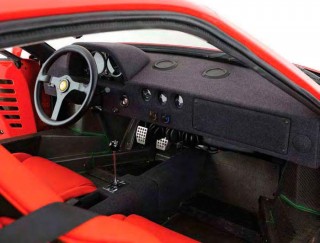 Check that all the electrics work. The F40 suffers similar fusebox issues to other Ferraris of this period: the fuse panel really isn’t up to the task of handling the electrical systems, so F40s often have aftermarket replacements fitted.

Make sure that your car comes with its original leather wallet, handbook, service book, toolkit and spare keys.

Few F40s do high mileages, so although the recommended service interval is 3000 miles, it’s much more likely that servicing will have been carried out each year – and it needs to be done annually to maintain the car properly. A minor annual service should cost around £1200 from a specialist, while a full cambelt service (recommended every two years) costs more like £2000.

The fact that the F40 was made in relatively high numbers for a Ferrari means that it’s taken a while for prices to rise, but rise they certainly have done in recent times. At one point, you could have picked up an F40 for as little as £130,000. Today, you’re looking at well over £800,000 for an F40. Most examples have very low mileage, and ones at the lowest end tend to have the highest asking prices. However, originality and provenance is much more important than a low count on the odometer.

Speaking of originality, a Ferrari Classiche certificate is a big boon. This factory-backed scheme authenticates any Ferrari (for a fee) based on the originality and authenticity of its specification. The beautiful red Classiche case-bound book is a very useful item to have when selling. 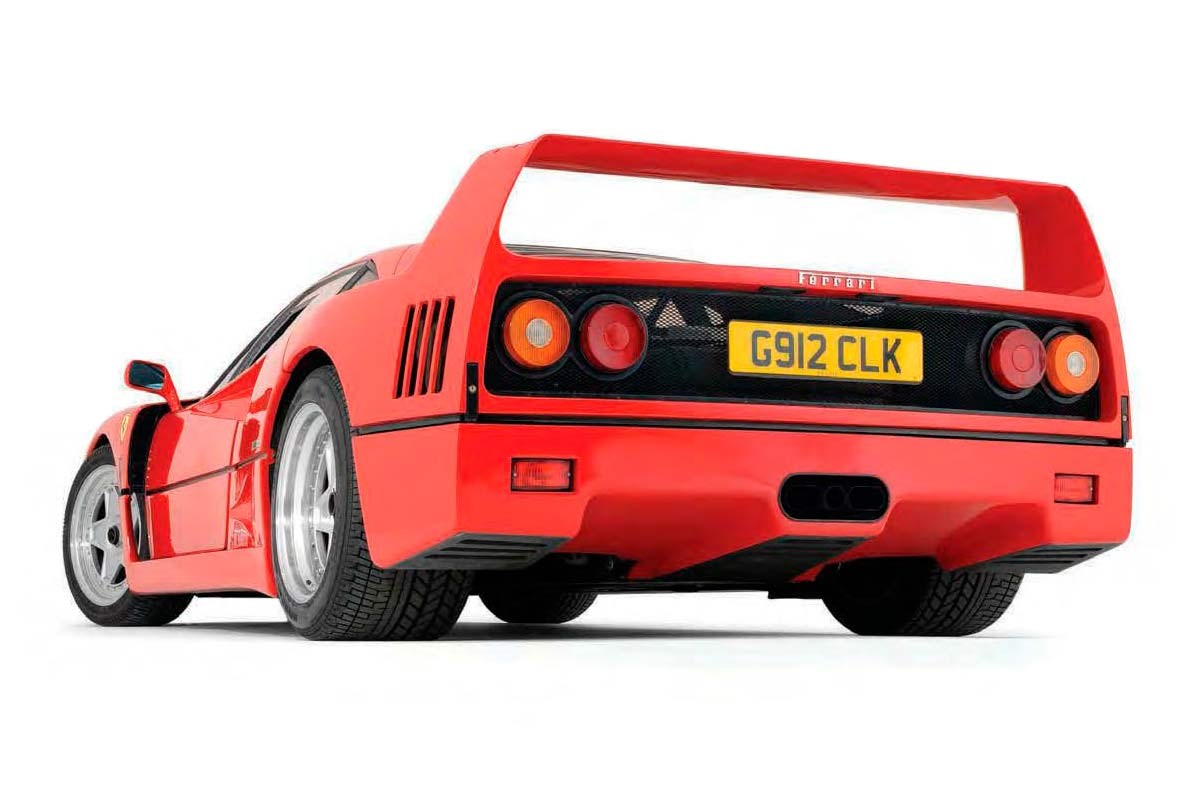 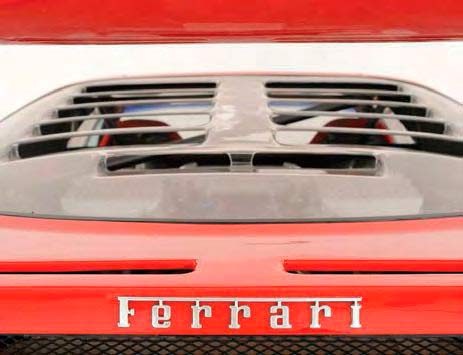 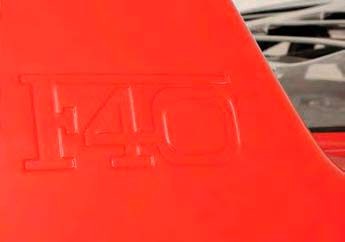 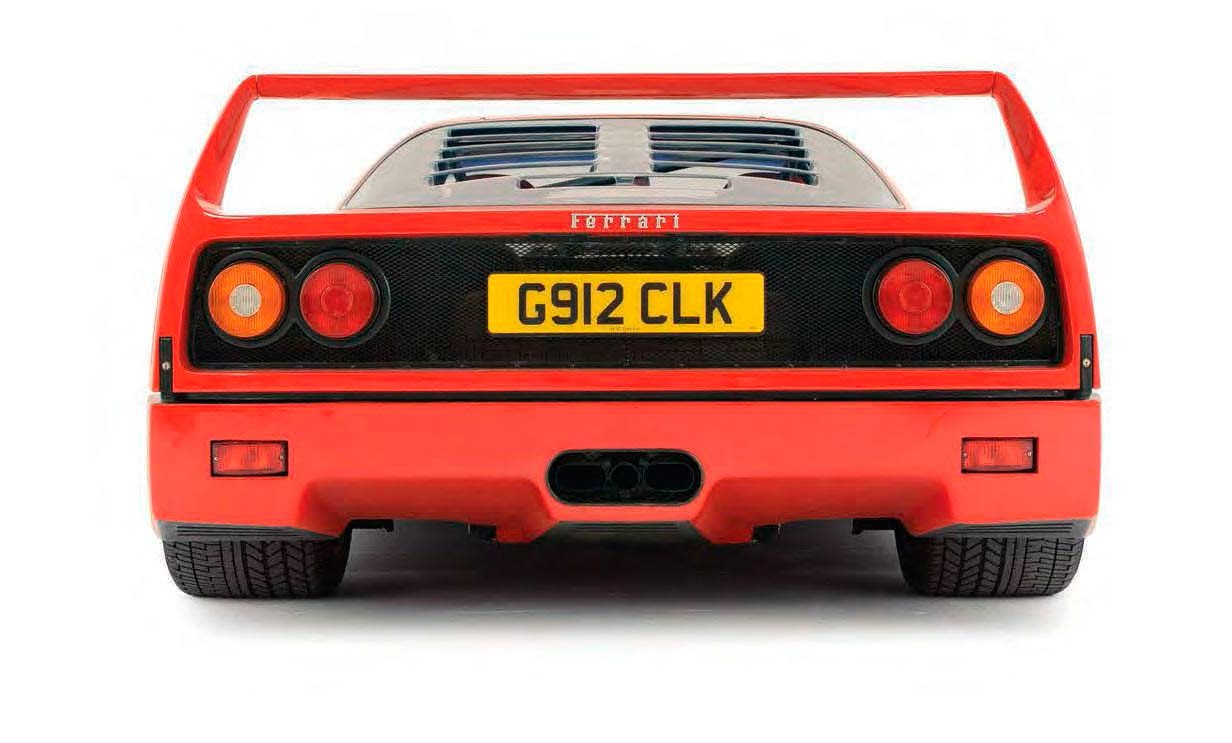 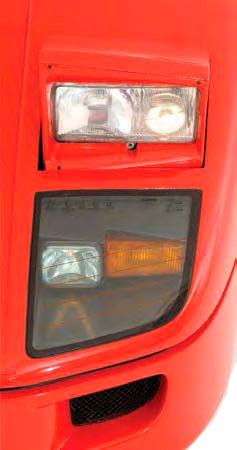 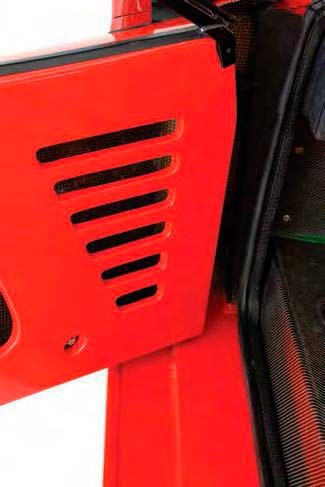 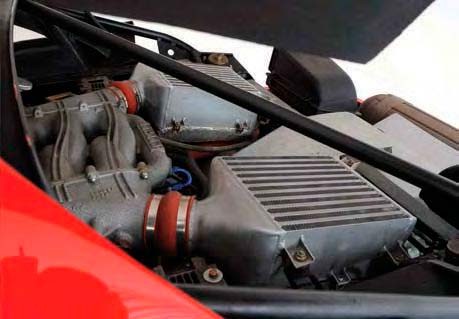 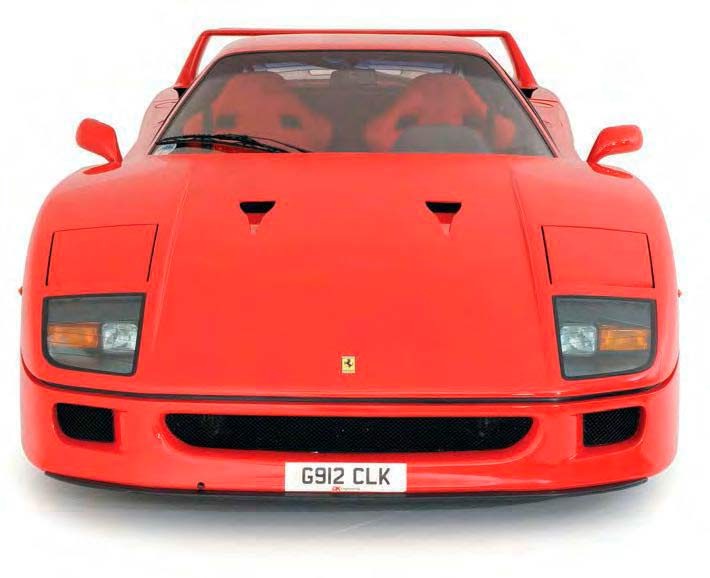 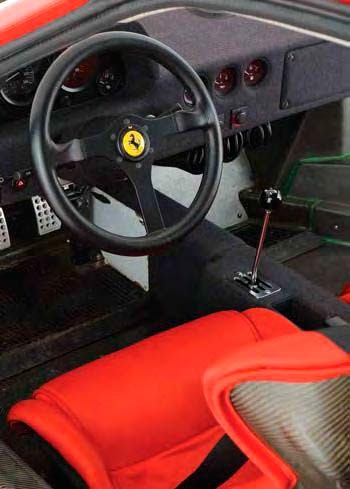 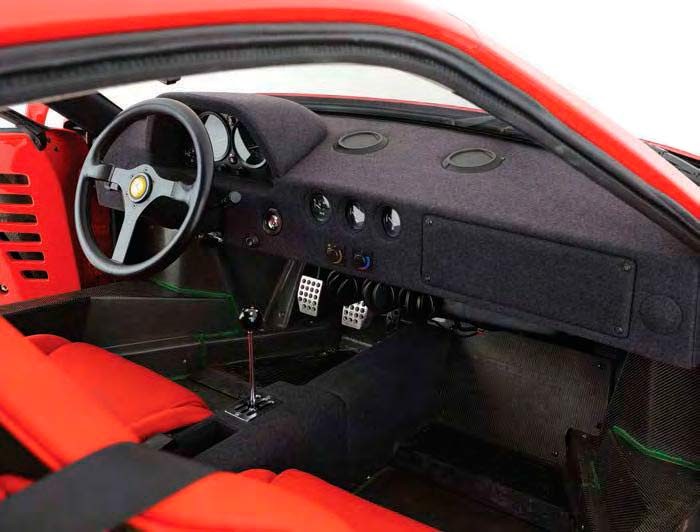 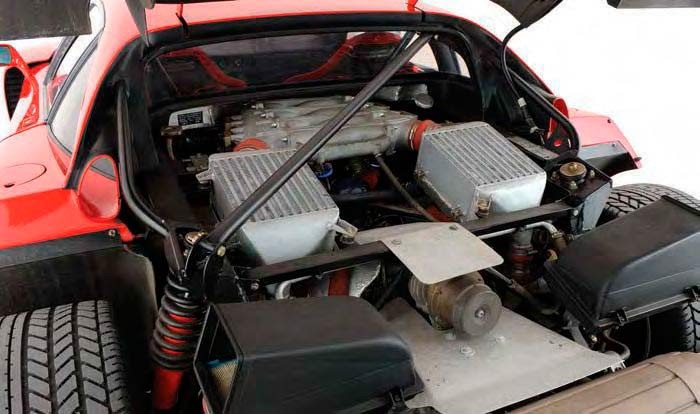 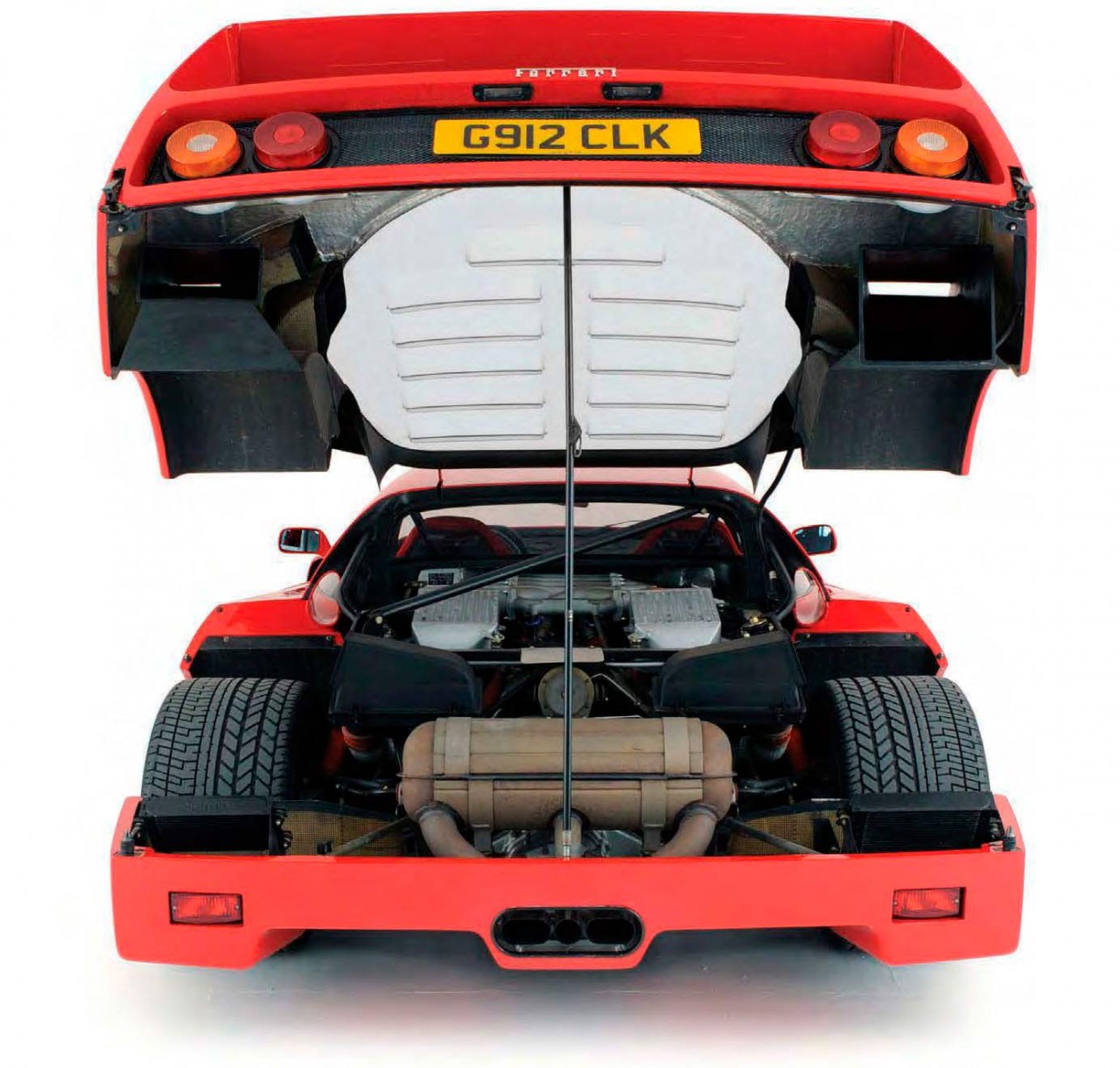 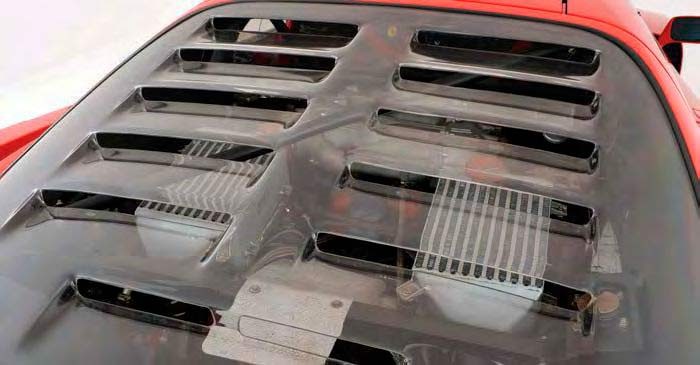 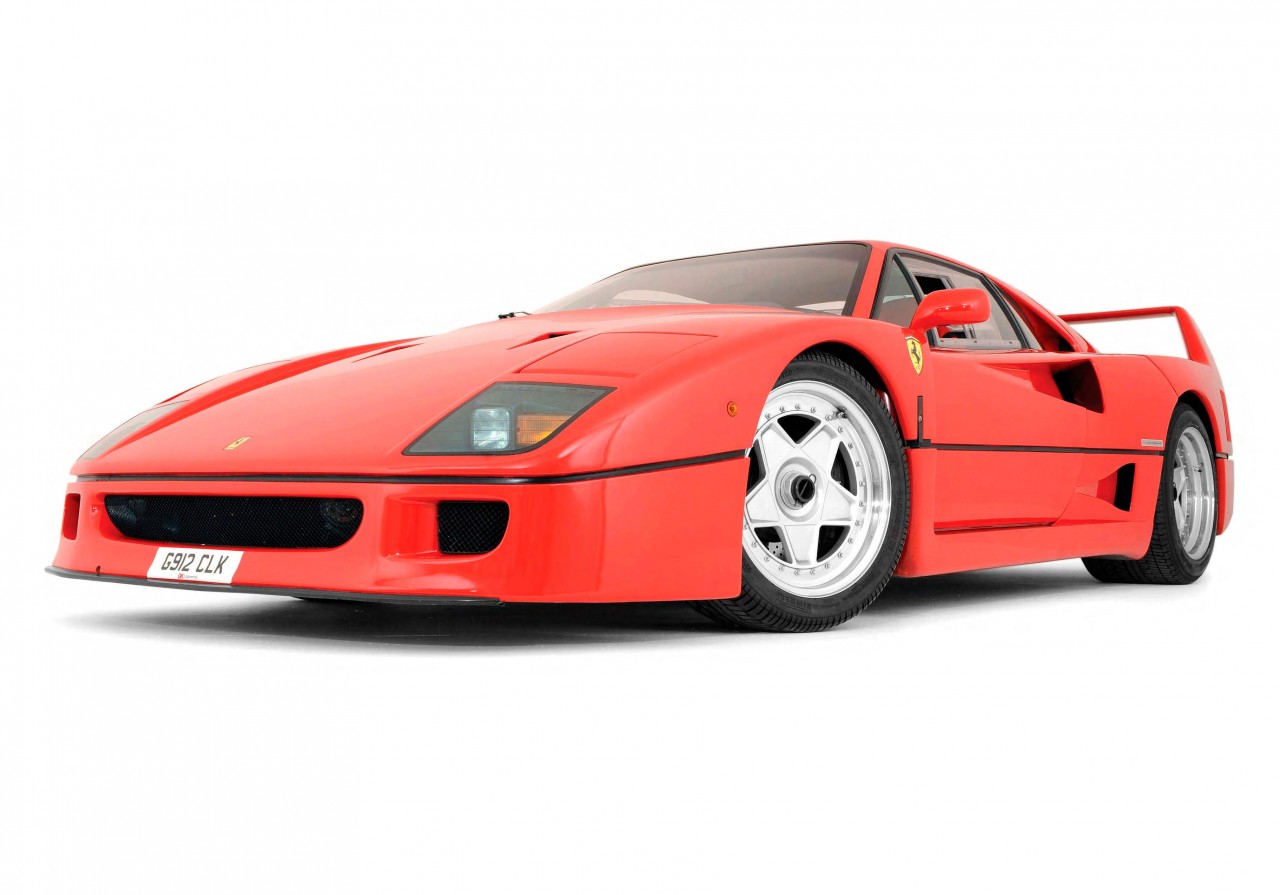 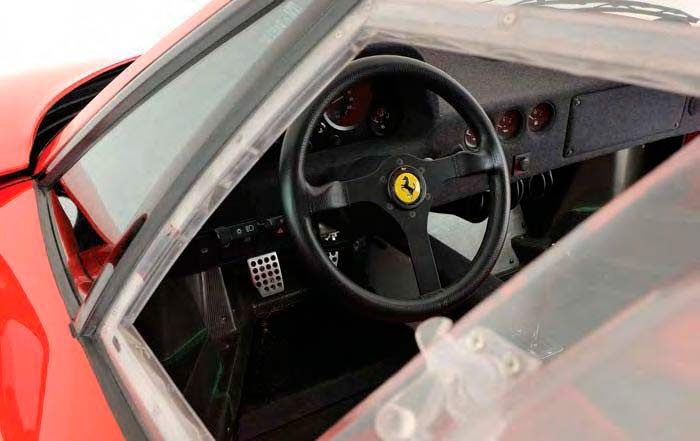 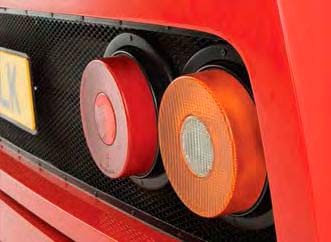 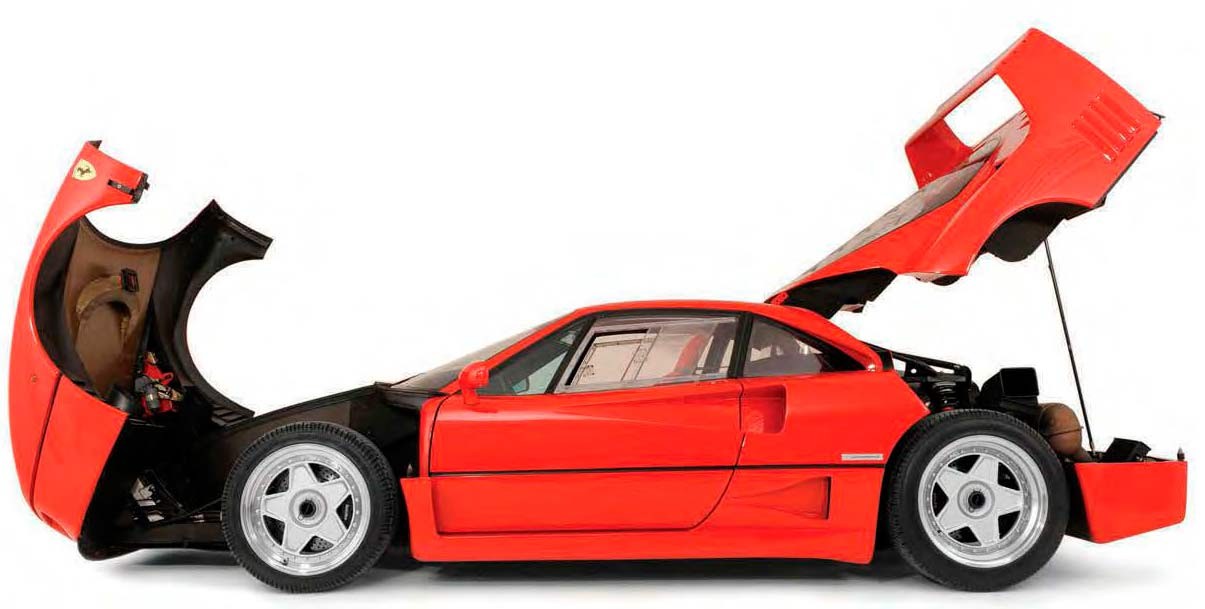 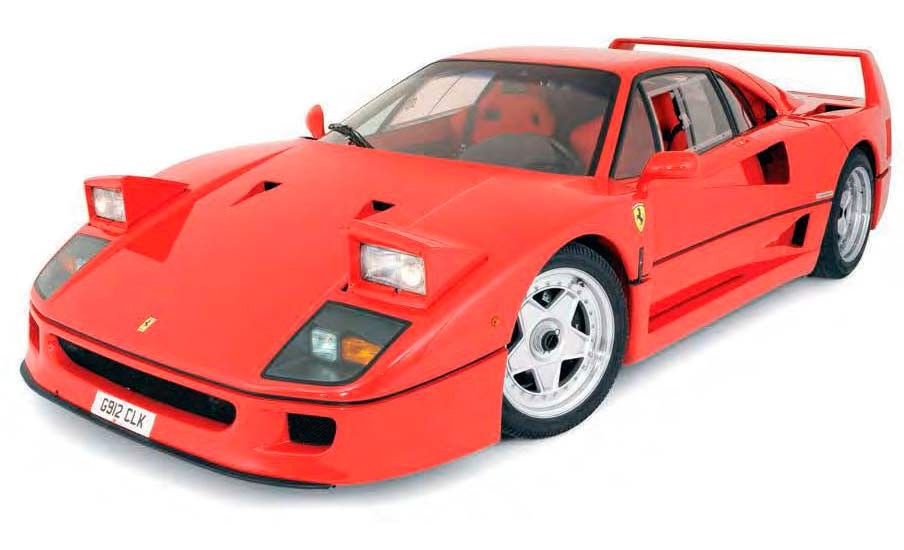 ABOVE: Pop-up lights do nothing for the aesthetics. Some cars are fitted with aftermarket adjustable ride height mods.

ABOVE: Only the first 50 F40s had Lexan windows, some were non-adjustable and intended for racing.

BELOW: Non-cat, Lexan window F40s like this one are the most valuable and sought after by collectors.