Back in the early 1990s, the station wagon genre was a world of pure functionality: cars with this much junk in the trunk were machines of focused utility, things that you bought because you needed to, not because you wanted to. And nowadays, as much as back then, there comes a point in everybody’s life – and believe me, if it hasn’t happened to you, it will – when you feel the urge to buy an estate car. ‘It’ll be ever so practical,’ you tell yourself. ‘I can use it to take hedge-clippings to the tip, I won’t have to pay an extortionate delivery charge when I buy a new washing machine, it’ll easily swallow the kids’ pushchairs along with the weekly shop, it’ll be handy for the dog…’ And before you know it, you’ve joined the beige Volvo set. It’s just an immutable constant of human existence you need to accept and not fight.

This, however, hasn’t exactly played out as fate dictated for Gábor Nagy. He may have pulled the trigger on a 1992-model B3 Passat estate, but he’s not exactly filling it with garden trimmings. You see, the Passat wasn’t just any other sensible early-’90s estate car. Volkswagen would happily sell you one with a VR6 engine in it. And that’s the sort of silliness that really flicks our switch. “I always wanted a VR6-engined VW,” says Gábor, “and I was also in love with the so-called ‘Pig Passat’, which is the nickname this generation has over here.” When he says ‘over here’, he’s talking about Hungary; he lives in Mány, about half an hour west of Budapest. But you’d be forgiven for thinking that he was referring to the USA, such is the Stateside vibe of this flawless wagon build, resplendent in lowdown USDM aggression.

“I was lucky to find that a friend of mine knew of somebody who had an abandoned Passat Variant project up for sale – complete with that all-important VR6 motor,” he continues. “So I didn’t hesitate in buying it and bringing it home! It was completely dismantled, but the shell was straight and had already been neatly restored and painted in LY3D Tornado red.” That’s a strong start, naturally, as the 1990s were longer ago than some of us care to remember, and the perennial spectre of corrosion hangs in the shadows around every ageing Volkswagen; it’s always best to start your project with a strong base, and having a flawless shell certainly saved Gábor a lot of hassle!

It was also very handy that the car came essentially in kit form, as the first thing that the fastidious car builder will do is to strip the thing back to first principles anyway, so that was another job jobbed. “I had to assemble the whole car from scratch, which gave me the advantage that I could do everything the way I wanted to,” he explains. “Since I’m a mechanic, it wasn’t a struggle for me to carry out the process, and it took roughly five months to complete it all at a comfortable pace. And aside from the re-upholstery of the seats, all of the work was done by myself.”

Now, running a retro car means different things to different people. For some it’s about reliving the honest simplicity of a lost age; of maintaining an old car as a sort of rolling time capsule, keeping every element true to its original state. For others, it’s about using a cool old vehicle as a base to build something thrilling, optimised for modern use in a form that pre-dates moulded plastic bumpers and catalytic converters. Of course, this doesn’t mean that the former are all concours pedants and the latter are bloodthirsty jigsaw-wielders with no sense of heritage – us car geeks can’t be pigeonholed that easily. What it basically comes down to is that we all like driving interesting cars, and we all have different ideas about what happens under the skin. Right? And with that in mind, Gábor’s mission statement was clear: classic looks, artfully updated, but basically as OEM as possible. With a bit of a twist though, that goes without saying…

We’re finding a lot of USDM style creeping into the European scene, which interestingly mirrors the American enthusiasm for obsessively chasing Euro-spec parts. It’s a useful zerosum balance of exchange, really – you’d think someone would get organised and arrange some manner of intercontinental swap shop. Anyway, the idea with this Passat was to sprinkle on an artful glittering of American parts, just to differentiate it from the usual Hungarian fare; a front bumper, rear number plate plinth and leather steering wheel were just the ticket to achieve this part of the makeover.

“Meanwhile, I completely rebuilt the VR6,” says Gábor, “assembling it with headers, two Supersprint mufflers and custom piping.” And with the exterior looking sharp and the engine making entertaining rumbling noises, it was time to address the chassis.

“I fabricated a custom air-ride system for the car,” he continues, “although since the shoot this has been replaced by an Air Lift Performance setup with 3P management.” While the car was up in the air anyway, he figured he should do something about the brakes too, slotting in a pair of Brembo 4-pot calipers at the front with meaty 310mm discs. These peek out through a set of beautifully detailed and incredibly shiny BBS RS wheels; a staggered setup of 7.5×17” up front and an inch broader out back, with skinny tyres offering just a little stretch to get them neatly tucked up inside the unmolested stock arches when the wagon airs out.

“I didn’t want too many exterior mods, it was important to keep it all looking largely as OEM as it could be,” Gábor reasons, and that’s why – aside from the USDM addenda and the uprated front and rear lights – you’re looking at a vision of period-correct 1990s perfection, updated for 2018 with that killer rims/stance combo.

This build, then, is one of fastidiousness, of attention to detail rather than making radical changes just for the sake of it. And the interior is a crystal-clear representation of this considered approach – it now sports the dash and doorcards from the facelifted B4 Passat, counterbalanced by the sublime Recaro Sportster CS seats, which have been superbly retrimmed in the ‘Jacky’ tartan fabric from the Mk7 Golf GTI. The rear bench has also been trimmed to match, and this interior treatment is really the most radical part of the transformation, reworking the utilitarian and workmanlike B3 estate into something sumptuous and premium. Not a purely functional car that you use because you have to, but an alluring and desirable one that you want to spend some quality time in.

What Gábor has achieved here is to reframe the concept of what an estate car is for; VW kicked off the process by fitting an unnecessarily powerful engine in there, and Gábor’s picked up the mantle and belted for the horizon.

“I’ve been to a lot of shows with it, and to Wörthersee a couple of times, and people seem to love it – both the cleanliness, and the fact that you just don’t see a lot of VR6 Passat Variants these days,” he grins. And one thing’s for sure: he’s not carrying dogs or garden waste about in that beautifully trimmed interior. This estate’s workhorse days are over – it’s time to have a little fun. 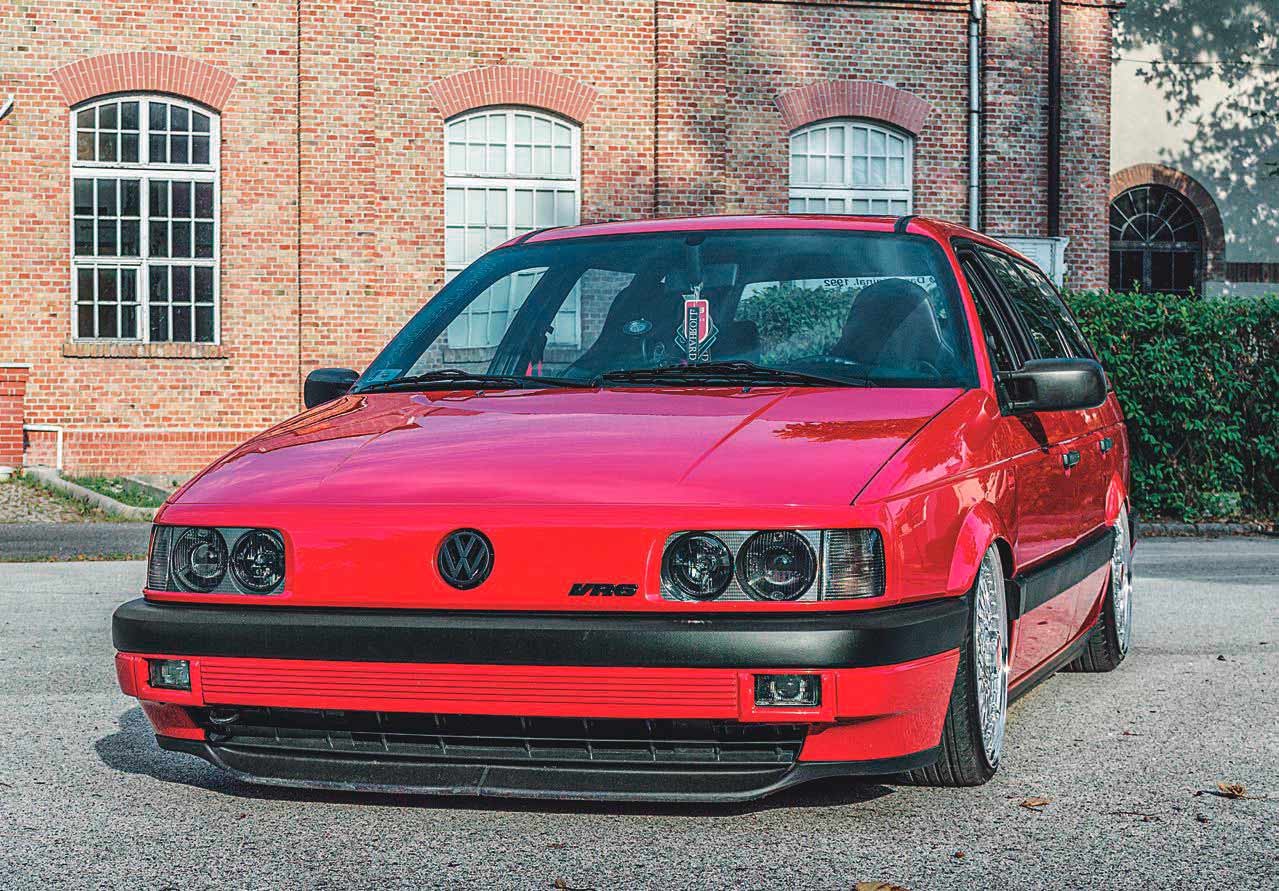 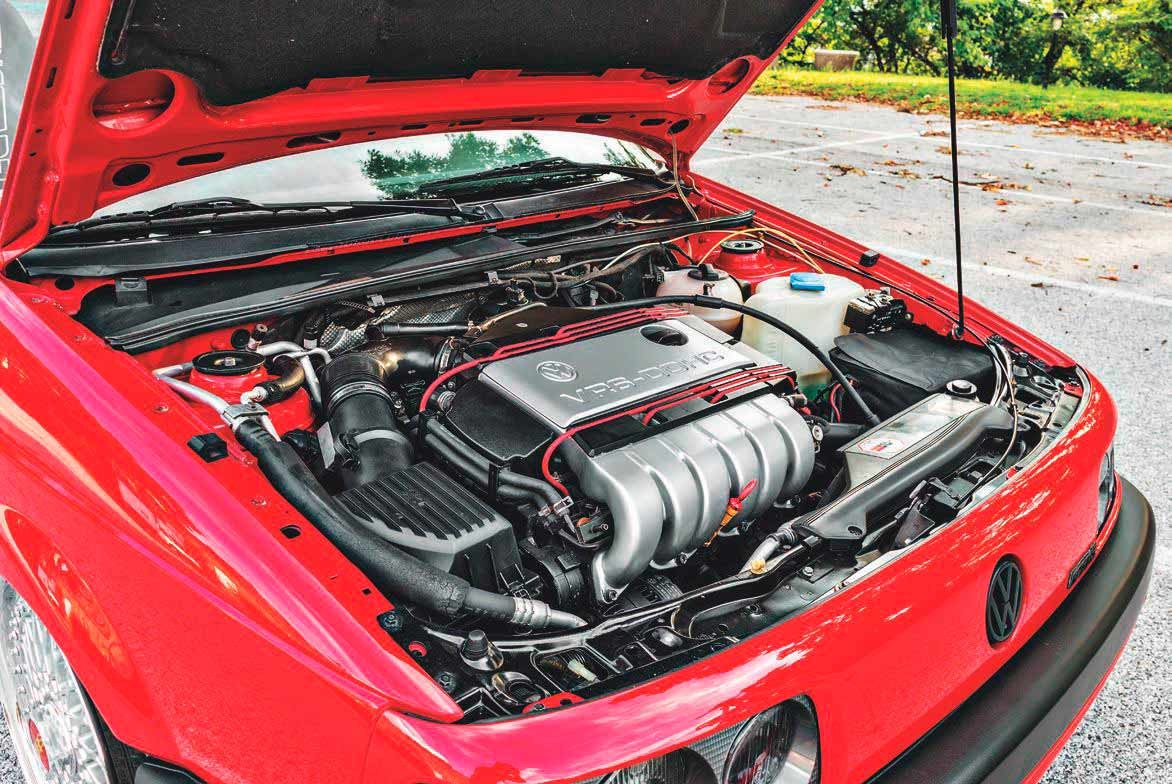 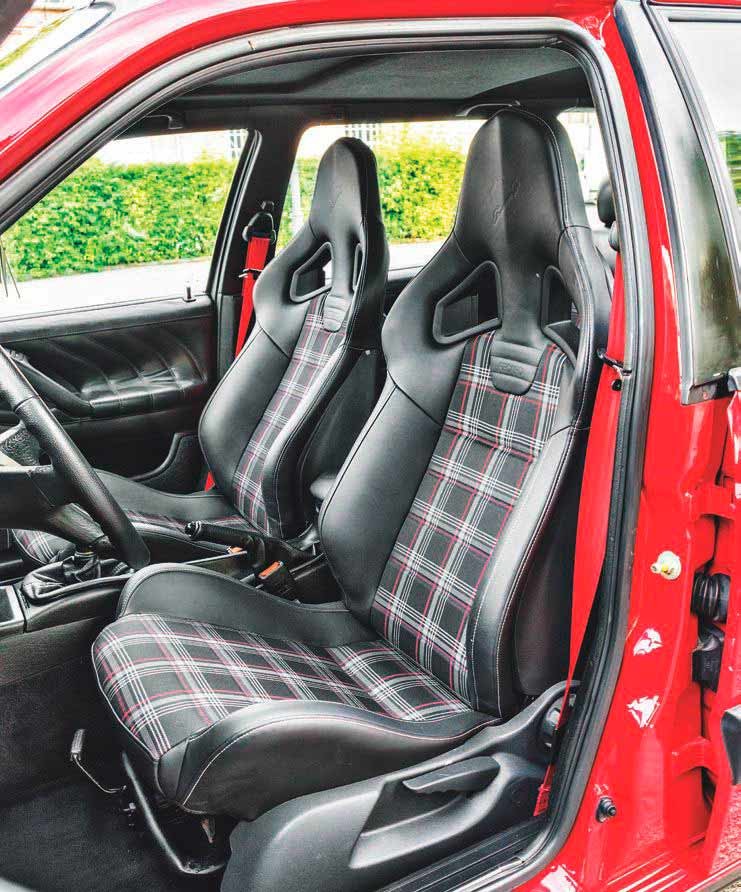 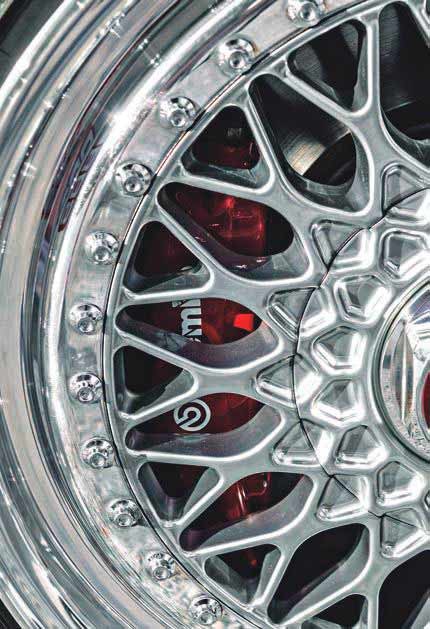 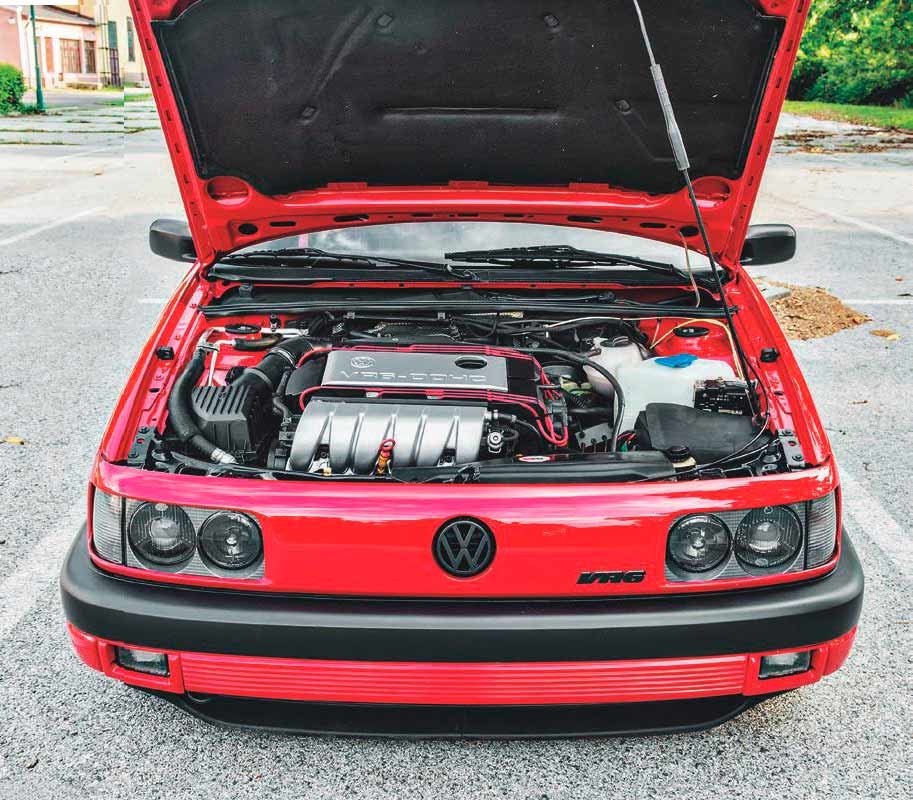 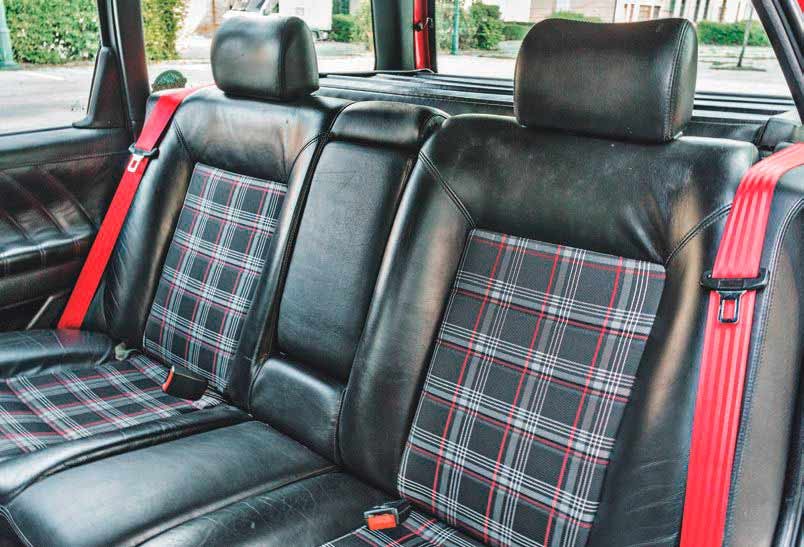 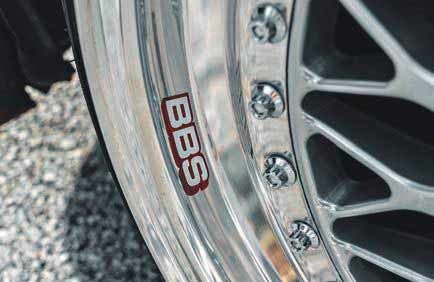 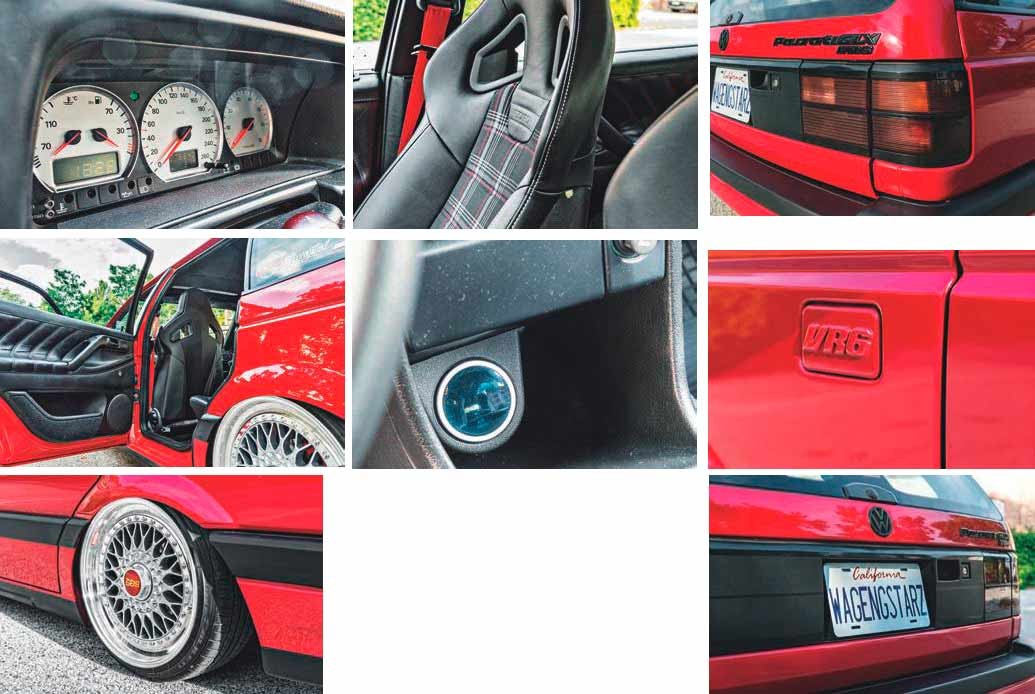 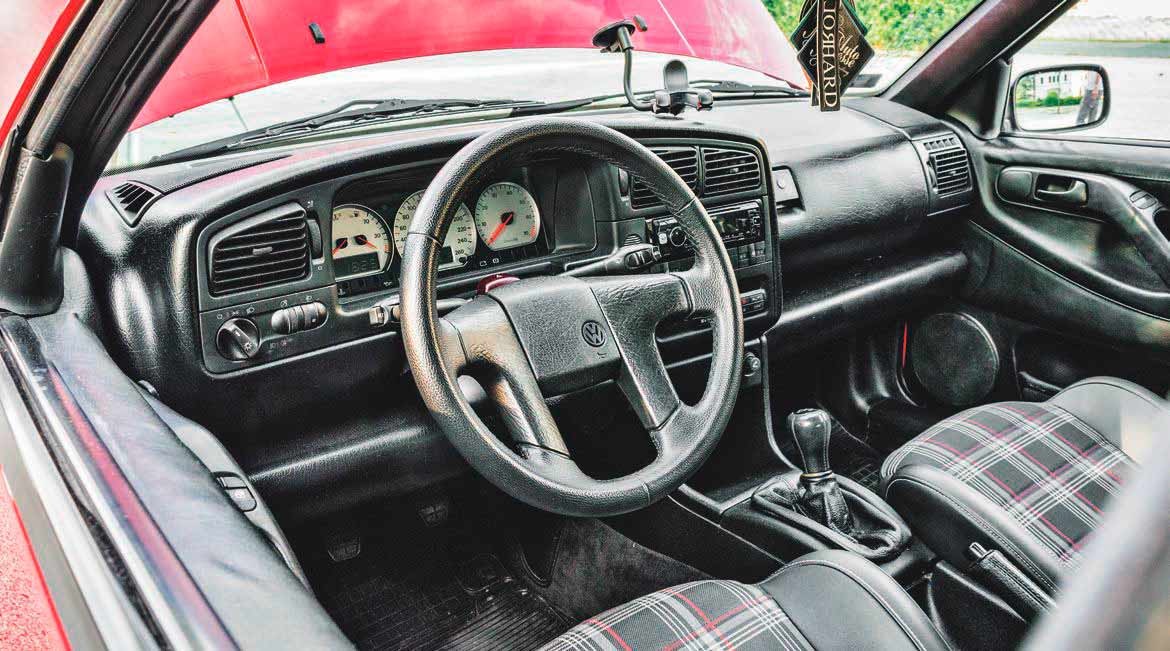 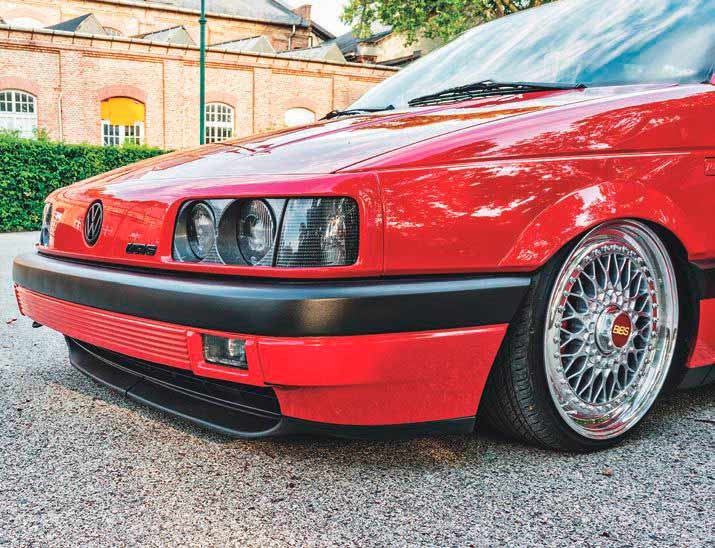 I didn’t w ant too many exterior mods , it was important to keep it all looking largely as OEM as it could be

The dash and doorcards are from the facelifted B4 Passat, counterbalanced b y the Recaro CS seats