A close look at BMW’s legendary V8 from the E39 M5.  While BMW is best known for its straight-sixes, the V8 has long been part of the Bavarian engine family, with some of the company’s earliest luxury cars being powered by V8s, such as the 502 and 3200 CS. The V8 has only recently become an M staple with the arrival of the S63, but the first M car to enjoy V8 power was the E39 M5, with the superb S62. Words: Seb de Latour. Photos: BMW, Steve McCann, Ian Kuah and Steve Hall.

For a while BMW considered the E39 540i to be fast enough to make the idea of an M5 redundant, but when the decision was made to create a successor to the E34 M5 3.8, it needed a suitably special engine and the 540i’s 4.4-litre M62 was the perfect starting point. It was based on the M60, BMW’s first V8 in over 25 years and launched in 1992, available in both 3.0- and 4.0-litre capacities. When the M62 was first introduced in 1996 it brought with it a number of improvements over its predecessor, such as the use of Alusil cylinder liners instead of Nikasil and a single row timing chain, while in 1998, VANOS was added and it came in both 3.5- and 4.4-litres initially, a 4.6-litre version of the engine being used in the E53 X5 4.6iS. 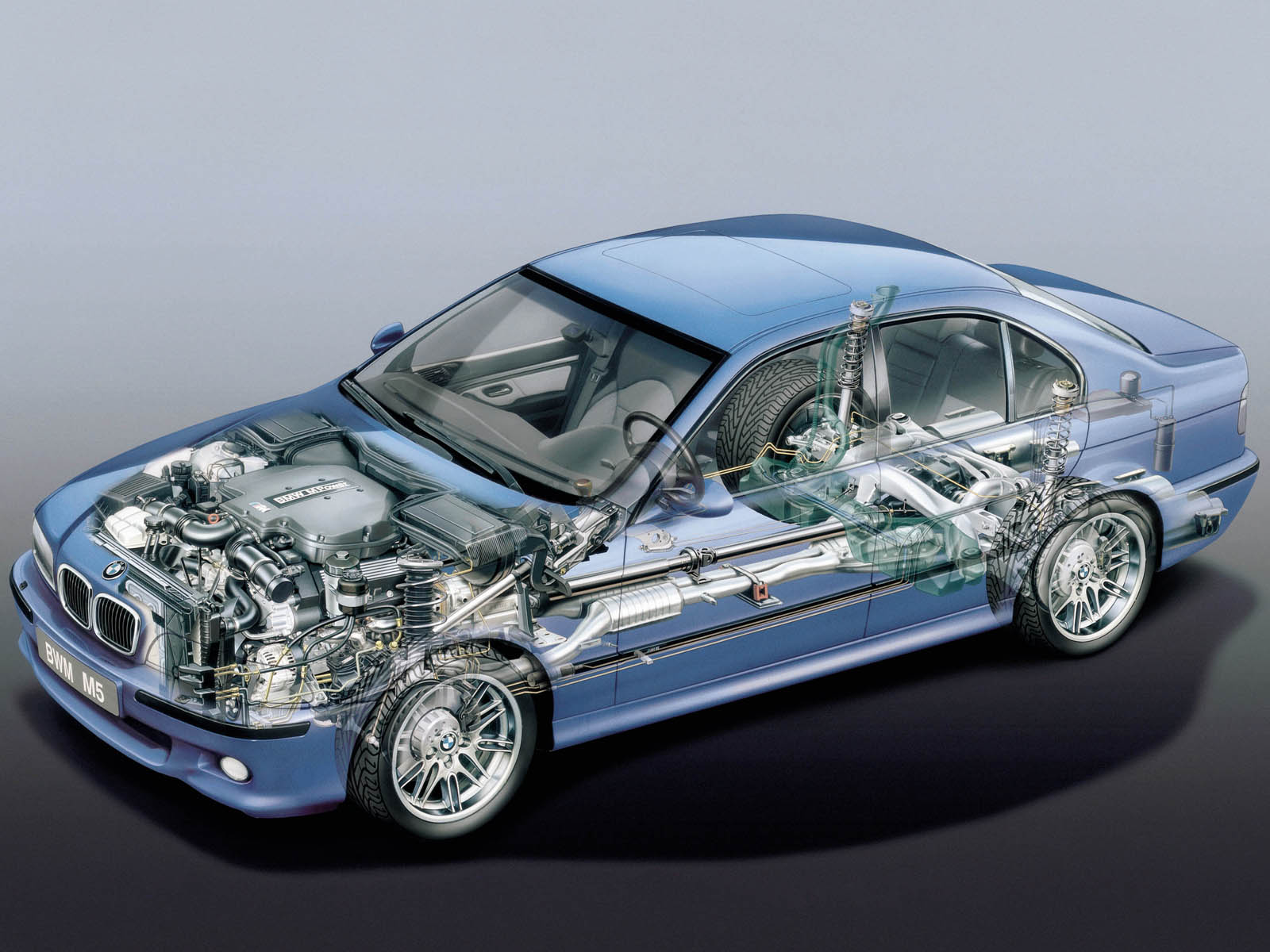 The S62 was assembled at the Dingolfing plant and has made two BMW appearances. Obviously there’s its first home under the bonnet of the E39 M5, but also in the Z8. It was transferred across unchanged, though the car’s lighter weight and shorter final drive resulted in it being even quicker than the M5, posting a 0-60 time of just 4.5 seconds. The S62 has also been a staple engine for supercar manufacturer Ascari for some time, in both the KZ1 and A10 models. In the KZ1, which was produced from 2003, the S62 was tuned to produce a spectacular 500hp and combined with the car’s carbon construction and 1330kg kerb weight, it resulted in a 0-60 time of just 3.6 seconds and a claimed top speed of 200mph. In the racing-spec KZ1-R, the S62 was tuned further still to develop 527hp along with 410lb ft of torque, whilst retaining the original 4.9-litre capacity. In the A10, launched in 2006, the S62 was taken to new heights in terms of power, the V8 now pumping out 625hp, whilst retaining the engine’s original displacement.

In 1998 the aluminium block M62 maxed out at 4.4-litres and 286hp along with 325lb ft of torque in the 540i but in order to extract levels of power suitable for the M5, BMW needed to carry out some serious modifications. The bore was increased from 92mm to 94mm and stroke was increased to 89mm from 82.7mm, which took displacement from 4398cc to 4941cc, technically making the S62 a 4.9-litre engine and not a 5.0-litre as it is normally, and incorrectly, rounded up to, while the compression ratio rose from 10.0:1 to 11.0:1. The increase in displacement left only 4mm of block surface between cylinders so for effective sealing with this tight cylinder spacing, BMW M engineers developed new three-layer steel head gaskets, while the cylinder linings were etched after honing to promote oil retention and reduce friction.

Beyond the capacity increase, BMW put a lot of work into the S62. It used Double VANOS continuously variable valve timing on both the intake and exhaust and a dual intake arrangement, which fed air to the plenum. From there it passed through 230mm intake runners to the cylinders; the entire plenum and runner assembly was attached to the throttle housings by means of a rubber/metal flange, one per bank, that both acoustically and thermally separated the plenum from the engine, helping to keep the intake air temperature lower. The engine featured eight individual, electronicallycontrolled throttle bodies one for each cylinder, with M Driving Dynamics two-stage control activated via the Sport button on the dashboard. The individual throttles were positioned closer to the cylinders than a single throttle could be, and that meant improved throttle response thanks to reduced air flow ‘lag’. The drive-by-wire throttle used a DC servomotor located between the cylinder banks to actuate the throttles via a shaft which operated two links that each controlled one bank of four butterflies. The servomotor reacted to accelerator inputs in 120 milliseconds, meaning there’s no hesitation from the engine when you put your foot down.

The S62 also featured modified cylinder heads and the crankshaft was a forged, five main-bearing counterweighted item with Mallory metal plugs to ensure it was well balanced; the con rods were forged then the caps were fracture split, ensuring the best fit when being installed and balancing pads were placed on the small and large ends of the rods. The camshafts were hollow and made from nodular cast iron for reduced inertia and increased lifespan. BMW also fitted a high capacity water pump and a duplex (double roller) chain drive for the intake cams. A MSS 52 Motronic digital engine control system regulated the fuel injection and varied fuel pressure as needed, with the fuel regulator plumbed into the fuel filter, meaning that excess fuel was returned directly to the fuel tank without passing through the fuel lines and rails, which in turn kept it unpressurised, keeping fuel heating to a minimum.

The pistons were unique to the S62, having been designed with specifically shaped cut-outs in the crowns to accommodate the intake and exhaust valves, meaning a different piston design was needed for each cylinder bank. Valve reliefs were fitted to the pistons, which were cooled by upward-firing oil jets when oil pressure reached 2.5bar. Elsewhere there was a G-force sensitive lubrication system with one pump for each cylinder bank along with an oil-to-coolant heat exchanger for the engine cooling, which has a number of advantages. Firstly, it warms the oil up quicker than an air-cooling arrangement, bringing the engine up to optimum operating temperature sooner, and coolant remains within the ideal operating temperature range for oil.

The S62 put out some impressive figures. Peak power was 400hp developed at 6600rpm, while maximum torque was 369lb ft, which peaked at a 3800rpm. However, raw figures only tell part of the story and if you take a look at the power and torque curves below you’ll see just how powerful and flexible it is. Virtually all of the S62’s torque is available from as low down as 2500rpm and it doesn’t really start dropping away until you get past 5000rpm, which gives it a wide and useable torque spread, and that means masses of midrange shove. “Above all, we wanted to create an abundant torque curve,” BMW M engineer Wolfgang Kreinhofner is recorded as saying, and they certainly achieved that. Power builds nice and progressively too, which means you’re not always waiting for that big kick to come, because it’s already putting the boot in nice and early. That doesn’t mean that the S62 is all about low-end grunt and mid-range punch, and it’s happy and keen to rev all the way to its 7000rpm rev limit.

BMW may have achieved some impressive figures with the S62, but there’s still plenty of room left for improvement. One of the biggest improvements you can make to the engine is replacing the standard exhaust manifolds with a pair of high performance items. The standard manifolds are arguably the S62’s biggest weakness on the performance front and a massive choking point when it comes to making power. The exhaust manifolds are so restrictive that fitting an exhaust with the standard manifolds in place will yield no increase in power, so your absolute first port of call should be the exhaust manifolds if you’re serious about getting more power from your S62. Evolve designed its own 4-1 high flow T304 exhaust manifolds, and while they might not appear cheap at £1995, you can expect gains of 30-35hp and 25-30lb ft of torque, so in the world of NA tuning these are serious gains that you can’t ignore. There are other performance exhaust manifolds available but unlike those, the Evolve items don’t compromise the S62’s impressive sub-5000rpm torque; the equal length design offering more top-end power and delivering almost 400lb ft of torque from 2000-5000rpm. If you want more power from your E39 M5, this is absolutely the first modification you should carry out.

Other gains with the S62 are not necessarily down to traditional power upgrades. For example, relocating the air intake temperature sensor; this is mounted inside the mass air sensor, behind the radiator, and becomes heat soaked, robbing you of power. Kits are readily available which relocate the sensor to the front of the car, giving a truer reading and more power, and costs about £100. A good intake kit will also do a fine job of releasing some more power, and the general consensus is that the Evolve intake is the way forward. It includes a pair of high-flow filters which are relocated to behind either side of the front bumper, behind the foglights, where they have a steady, uninterrupted flow of cold air, and does away with the undersized cold air boxes and restrictive cold air feed tubes. In combination with a remap and air intake sensor relocation kit, this triumvirate of modifications will yield an additional 20hp.

Free-flowing sport cats (100 or 200 cell) will offer a small increase in power at high revs, and while you might want to add an exhaust, it’s not actually going to give you any gains, though it will certainly sound nice. Cams are a major step and you really need to consider how you drive your M5 and what you want from it before you go down this route as it will change the nature of the car. You will lose some of the engine’s low-end response, with power being developed above 3500rpm and you’ll need to make use of the engine’s full rev range to really get the most from the car. If you drive your M5 hard, though, they are worth looking at if you want to extract every last drop of power from the engine. For the money, a lot of owners have said that they would go down the forced induction route if they were to do things a second time, and that’s where the real gains are to be found. The E39 M5 loves to be supercharged and it responds very well to forced induction, developing some serious power; it’s not cheap, but supercharging is the best way to get big gains from your S62. Evolve and ESS both offer supercharger kits, both using a centrifugal compressor and both offer similar gains, as you’d expect. The ESS kit costs £7436.90, runs at 5.6 PSI and delivers 560hp and 460lb ft of torque, while the Evolve kit comes in two flavours. The Stage 1 kit costs £7200, does not have an intercooler, runs at 5 PSI and develops between 520-550hp along with 420-440lb ft of torque; the Stage 2 kit costs £9000 but adds an intercooler, ups the boost to 6-7 PSI and takes power to 576-610hp while torque rises dramatically to 460-480lb ft.