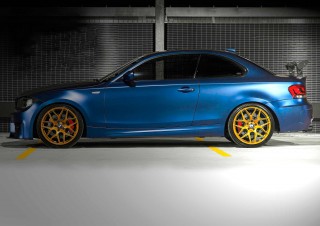 Fast, furious and fully focused 470HP BMW E82 135i. Blue Steel Track-focussed 135i E82. From the chilly wilds of Canada comes this searing vision blue; a track-honed, maximum-attack 135i built for driver thrills, staring you down with its steely gaze… Words: Daniel Bevis. Photos: Matt Beren.

Stance’ has become such a buzzword in the 2010s that it’s open to huge interpretation now we’re hurtling towards 2020. Whether your personal proclivities lie in the minutiae of tuck, poke, camber or anti-scene lift, the proximity of wheel to arch isn't just a technical detail, it’s a lifestyle. 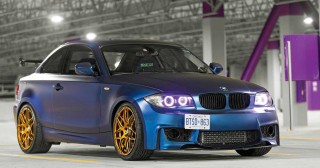 This perky 135i is a clear indication of where a lot of people are positioning themselves nowadays: it’s usefully lower than stock (that centre of gravity is everything, you know) and you couldn’t fit too many fingers between those tyres and arch Ups, but it’s also aggressively up-and-at-’em at the same time, isn’t it? An almost imperceptible rake, a stance like a terrier straining at a leash, it's all purpose and no messing about. The car looks like it’s haring down a canyon pass even when it’s standing still.

Now, it’s often said that the E82 1 Series Coupe is the spiritual successor to the two- door E30 3 Series, and that ethos is very much in evidence here - perhaps fused with a little of grandpa’s wisdom from the old 2002 Turbo - by the simple, aggressive proportions of the thing. It’s a pert, unapologetic three-box, unfussy and rippling with potential. You can imagine it sitting happily next to a 1980s 325i; an everyday legend, reimagined for a Millennial audience. And we just love the cheekiness of the blue wrap/gold wheels combo - that should wind up the 1990s Subaru fans a treat! 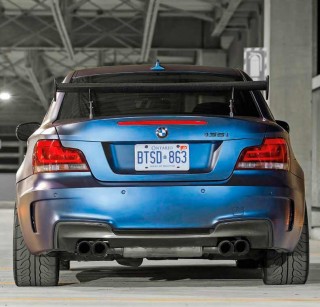 You see, this car is the product of a pan-marque automotive passion forged over the decades for Canadian owner Christopher Dawe. Having started his automotive journey in a Chevrolet Beretta, of all things (picture a Vauxhall Cavalier in a plunging-neckline party frock), he moved into the VW scene and quickly became indoctrinated. “I’ve always been interested in BMWs,” he says, “but I think a car guy can be loyal to a brand, and I was loyal to VW. Now, however, it’s safe to say I have been converted! The level of quality and engineering put into BMW is not always something you can describe as much as feel, in comparison to other cars.” You’re preaching to the choir, dude – and it’s extremely impressive that a person’s first BMW would something as outrageous and capable as the 135i. That’s a serious machine.

“I was actually out looking at getting a Golf R, which would have been my fourth VW,” he admits. “But I just happened to take the 135i out and I fell in love with the rear wheel drive, and the inline-six sound. It felt planted like a big car, yet nimble. The perfect fit for a project where form and function felt equally balanced.”

Christopher had an idea in mind to get a car that would be entertaining and competent on track, and the 135i ticked a lot of boxes. “It just seemed like a no-brainer," he says. “And since it was released back in 2007 [this car is a 2012 model], sourcing aftermarket parts wouldn’t be difficult”

So with the plan formulating in his head and a wishlist of parts already being drawn up, Christopher needed to find himself a machine to bolt all of these go-faster dreams to. The right candidate turned up at a dealership local to his house (which was pretty handy!) - in great condition, with 80k on the clock but still feeling tight as a drum, having been properly looked after. “It felt like no-one had ever driven it,” he remarks, in wonder. Although if the car had grown complacent in its cosseted lifestyle, it was about to receive a mighty shock. Christopher is no light-foot, granny-shifting urban plodder. This planned build had purpose. 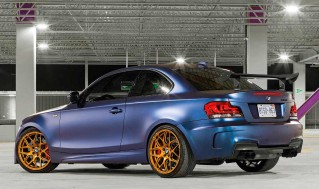 “The biggest mod was the Pure Turbos Stage 2 hybrid turbo upgrade, with larger inlet and outlets,” he grins, cheerful in the knowledge that he’s very much made the right choice. “Then I commenced with some smaller but essential mods, like the front-mount intercooler, BMW Performance oil cooling kit, cold air intake, and oil catch can.” Another addition, which is as much entertaining as it is useful, is the Akrapovic Evolution 1M exhaust system, featuring a clever Bluetooth valve control system - meaning the driver can adjust the loudness of the exhaust with his phone. How Millennial is that? And if violently explosive upgrades flick your switch, check out the Snow Performance water/methanol injection kit. This is a nifty setup that works to reduce inlet temperatures, increase fuel efficiency, and ultimately increase peak power by around 20%; it achieves this by squirting a mist of water/methanol mix into the combustion chambers at just the right time in the fuelling cycle. It’s clever stuff “All of these things were actually pretty straightforward,’’ says Christopher. “The great thing about a hybrid turbo is that there are no custom modifications needed for fitment, due to the unit keeping the stock housing. The car was initially misfiring after the tune and it did take a little while to figure out that a turbo seal wasn’t fitted at the time of the installation, which caused a leak, thus giving misleading air-fuel readings once it was on the dyno. But after finally getting it worked out and tuned, we got the car up to a respectable 470hp and 505lb ft" Stirring figures indeed, particularly given the relatively lightweight form that it’s all hiding inside; with a wet weight a little below 1500kg, that gives this shimmering blue pocket-rocket a power-to-weight ratio akin to a 911 GT3 RS. Which ain’t bad.

The chassis of the E82 is a formidable thing in stock form, naturally, although we don’t really do stock. And thankfully neither does Christopher. “The M3 control arms really change the turning radius of this car, I can’t recommend this enough for guys running 1 Series cars out there," he enthuses. He’s equally effusive about his KW Variant 3 coilover suspension too, which works in harmony with adjustable camber links and plates. “These were all picked due to their ability to be dialled-in for the track,” he explains, “but the KWs still offer a good on-road comfortable drive without feeling like a full-on race car. And the WP Pro ClubSport big brake kit was chosen because brakes are the first thing that will go out on your car when you have a few hard laps on the track! This setup will give you the bite and longevity needed to keep you lapping at a hard pace.” 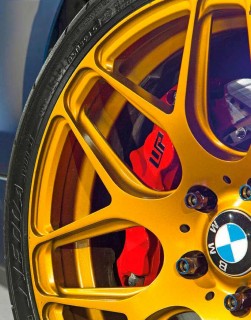 With the oily bits all coming together nicely, Christopher certainly didn’t want to scrimp on the aesthetics, which is why you see the gracefully maturing silhouette adorned with a matt Trenton Blue vinyl wrap, to imbue a frisson of motorsport magic. The lines of the E82 have been left unadorned by aggressive bolt-ons, with the only deviations from factory-stock being front and rear aero aids to help plant the coupe on track - a carbon fibre lip at the pointy end, and an adjustable carbon wing on the boot, acting as a towering statement of intent. “I've always liked blue, and I wanted something that was matt yet still had some chrome-looking accents” says Christopher. “The Trenton Blue really covered all aspects of my vision, and Andre at Restyle-It did a great job on the wrap with no real issues - it took about five days.” Naturally the colour scheme carries through to the interior as well. “I wanted a blue and black theme, with Alcantara. The blue Sparco race seats fit the bill nicely, along with the brushed black steel interior trim; Alcantara BMW M Performance gear and handbrake gaiters all came together well with the Alcantara BMW M Performance steering wheel.” And to return to the subject of stance - which, of course, is inextricably interwoven with wheel choice - Christopher’s played a blinder with his rolling stock. Mesh wheels are a classic choice for Bavarian metal, and the flow-forged MRR FS01 19s fitted here dovetail neatly with the project’s lightweight, track-biased sensibilities.

On the whole, it’s all come together very neatly, hasn’t it? Christopher reckons it took around three months to build it all up, although for months afterwards there's always going to be tweaking and refining to get the chassis and mapping just-so. “Argus Automotive is doing a great job of dialling-in the car for the summer and making sure all the parts work in unity,” he smiles. “I may get another custom tune down the road, as the car has room for more horsepower with a few little tweaks... I think my favourite mod, though, is the exhaust - sure, it doesn’t add huge power like, say, the turbo does, but there's nothing that adds more excitement to your drive than the sound of a great exhaust. And Akrapovic, in my opinion, makes the best sounding exhausts on the market."

That, in essence, sums up the build. Sure, it’s been honed to be a vicious point-to-point machine with tenacious grip and mighty swells of torque, but what’s most important is the feelings it conjures for the driver. The stance is on point, the looks are top-notch, the spec list reads like a teenage dream, but above all else this car is all heart A little comer of Mississauga, Ontario devoted to pure BMW thrills. Thank goodness Christopher’s not still into VWs, eh?

“Whether your personal proclivities lie in the minutiae of tuck, poke, camber or anti-scene lift, the proximity of wheel to arch isn’t just a technical detail, it's a lifestyle” 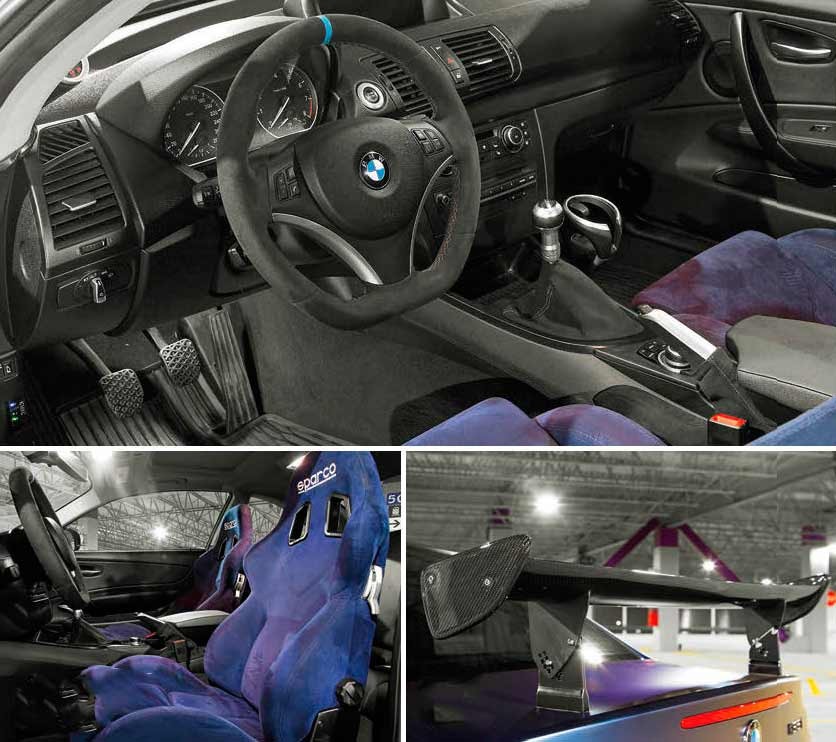