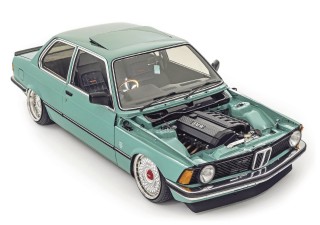 When you think about it, car enthusiasm must be a curious thing to those on the outside. We spend a large portion of our lives around cars, be it looking at them, reading about them or talking about them. To non-car people this might seem like a strange use of time and effort, but that would be completely missing the point; as we see it, being enthusiastic about cars is a ticket to a community. In a world full of copies, there’s something really fascinating about modified cars, which represent four-wheeled self-expression and individualism. In BMW circles, there are of course plenty of owner club-types who accept nothing but originality, which is absolutely fine, but for the rest of us, a few modifications here and there is just about putting our own stamp on things, isn’t it? 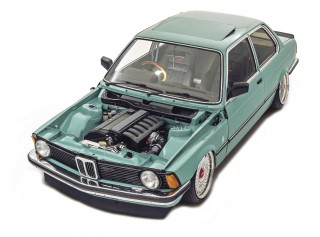 Talking of individualism, step forward Ben “Bean” Anson, 25, from High Wycombe. A BMW Technician at Sytner, Ben certainly knows what high standards look like and this is fully reflected in his unique E21. Before getting his hands on this 1982 316, Ben had a track record of modified cars including a low Honda Civic EF saloon on Gottis and a wild 350hp B18 turbo Civic EG. While Ben danced with the JDM devil, he had always been a fan of classic BMWs growing up so it was only a matter of time before he made the move over to Bavaria’s finest.

On the hunt for his next car, Ben wanted to scratch his itch for a classic and for him, it had to be a shark-nose BMW. Being 19 at the time, he didn’t have a huge budget, so his online searches returned mostly E21s. The world of classic BMWs can be a minefield; there are so many ropey examples about, not helped by dealers mopping up the very best cars and slapping big ticket numbers in the window, putting them out of reach of younger BMW enthusiasts who want a usable classic.

Finding a good, solid, original E21 locally could well have turned out to be a difficult and frustrating process but, fortunately for Ben, the stars had aligned. As luck would have it, there was one particular E21 which caught his eye but, more importantly, turned out to be located just 10 miles from his home. Bonus.

No sooner had Ben seen the advert online, he was straight on the phone and en-route to view the car, leaving nothing to chance. Being a BMW tech, he knew exactly what to look for and was able to spot potential, being able to carry out most of the work himself. Thankfully, there were no nasty surprises and upon inspection everything stacked up and the deal was done. Ben was now the proud owner of a very clean, bone stock E21 in Titan silver. 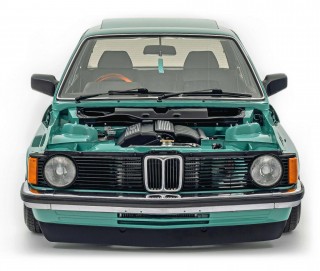 With Ben having always built modified cars, it was no surprise that the E21 would undergo modifications along the way, as with his previous cars; “I always planned to make some changes, but never thought the project would snowball like it has!” he laughs. As with any long-term project, there have been countless hurdles along the way, testing his patience and calling on all of his problem-solving skills and out-of-the- box thinking. Ben’s E21 represents the on-going result of creative thinking.

His first round of modifications to the E21 followed soon after taking ownership, with a basic air suspension setup fitted and a set of 15” Gottis bolted up. He was never quite happy with the car on 15s so decided to offer up a set of 16” Schmidt TH Lines, which filled the arches perfectly. This look lasted two years, but boredom eventually set in and he decided a wrap would be a quick way to dramatically change the overall look, going from silver to matt red and, at this point, Ben was still using the car daily. He was satisfied with the wrap at the time because it totally transformed his E21, but there would be a downside to his decision because six months later, when he wanted to go back to the original Titan silver, removing the wrap took all of the original lacquer off – ouch.

Knowing it was curtains for the original paintwork, Ben resigned himself to a full respray and decided straight away it was time for another colour change, but this time it would be real paint laid down by the experts at Stellar Paintworks in Wycombe. This was also the turning point when the E21 stopped daily duties and became a full-on show car. With ideas running wild on new colours, Ben’s heart was set on a classic pastel shade for the E21, keeping things period-correct. After spending hours online researching 1960s and ’70s paint codes, he found “the one” totally by chance. The colour in question was Turkish Green and with his perfect hue selected, Ben was back up to Stellar Paintworks with his idea and a completely custom colour was created just for him. Being a hands-on guy, Ben decided to do all of the bodywork prep himself, which was completed over the course of a month or so. Every panel was stripped-back and prepped, ready for the final professional finish. At the time, he decided to leave the original M10 engine and bay stock, knowing he would revisit it later down the line with some very special and much bigger changes. All-in-all, the exterior of the E21 went from silver (with peeled lacquer) to Turkish Green in just under six weeks, with a clever touches like the custom extended splitter and Foha rear spoiler added to provide some retro goodness to the styling. 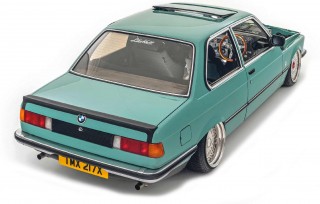 The original air-ride setup was okay to begin with but Ben always knew that at some point further upgrades would be due to get the car sat exactly how he wanted. As a result, he has carried out lots of beneath-the-surface work, fabricating a custom raised subframe and one-off raised and widened rear turrets to get the E21 sat just right. Ben’s E21 is brought closer to the floor thanks to a custom GAZ strut and air bag setup, all kept in check by AutoPilot V2 management. As part of the suspension overhaul, all of the hardware was powder coated and poly bushed, making this is a proper resto-mod project.

Ben is not a man who does things by halves and there can be no better proof of that than under the bonnet of his E21. It’s absolutely not possible to talk about this E21 without mentioning that engine bay, which is a lesson in sheer perfection. We mentioned earlier that when the E21 was painted, the original M10 four-cylinder engine was kept in place but, when funds allowed, Ben set about turning his E21 into a “complete build”, focusing his attention on the engine conversion he had always promised himself. The engine bay, which has been repainted and smoothed to within an inch of its life, now plays host to a modern heart in the shape of an M50B25. “I decided to go for an M50B25 conversion because the E21 had to be a six-cylinder, nothing else was going to cut it,” he says. Ben also treated his E21 to a full custom Walton Motorsport exhaust and manifold, which is a thing of absolute beauty. There’s a whole lot of nip and tuck going on in the bay, letting the engine and manifold take centre stage; see if you can spot which parts have been removed to create this totally minimal look… The engine bay is a stunning mix of old and new, with the smooth minty green paintwork contrasting flawlessly against the all-black M50. This is sheer E21 perfection.

“I always planned to make some changes, but never thought the project would snowball like it has!” 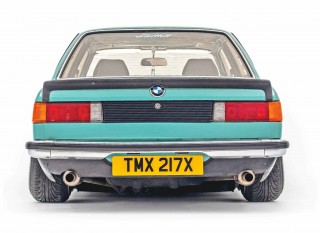 As a result of the increased power decent brakes were a must, so Ben purchased a set of Wilwood four-pot calipers and uprated discs to keep the additional power tamed. In the wheel department, this E21 now wears a timeless set of BBS RSs. Naysayers could dismiss this wheel as being “played-out” while others might say they don’t like needlessly expensive wheels but, semantics aside, the BBS RS is an absolutely classic wheel design and these wheels have (quite rightly) earned themselves cult status over the years. Being three-piece construction, the RS can be customised in every way, both in width and diameter, which is quite important if, like Ben, you have your mind set on stance/fitment. He managed to find himself a set of original 16” RSs, which have now been completely tailored to fit the E21. “Perfect fitment” is always pretty subjective, but Ben has absolutely achieved the goal he set himself from the beginning, with no compromises. BMWs have a tradition of staggered wheel setups for obvious RWD-related reasons, so this theme was maintained, which suits the E21 down to a tee. The 8.5x16” fronts, tucked right up under the arches, contrast with the 9.5x16” rears, which provide a low enough offset to kiss arch to lip, as Ben intended. This is millimetre perfect stuff. Well, we said Ben was a details man, didn’t we? A set of BBS Turbo Fans were always on his wish list; when he finally got his hands on a set and offered them up, he was over the moon. “I was inspired by the Le Mans cars of the 1970s and ’80s, which ran brake cooling fans, so I decided to get a set for my wheels, purely for the look,” he grins. With gloss white centres and polished hardware on the BBS wheels, some might think Ben is crazy for covering up his front RSs, but on this evidence, it’s hard to argue with how damn cool the Turbo Fans look.

“With ideas running wild on new colours, Ben’s heart was set on a classic pastel shade for the E21, keeping things period-correct”

With so many changes made to the exterior, you might be forgiven for thinking the interior has gone untouched however, as we’ve mentioned, Ben is a details man and there are a few choice modifications inside, too. He set about freshening up the interior, since he found himself spending a lot of time behind the wheel travelling to shows. The original grey carpets and headlining were dyed black to match a set of Mk3 Golf GTI Recaros and a wooden Nardi steering wheel was added to complete the look, which is simple, effective and well thought-out and makes the interior a very pleasant place to be.

Ben is true car guy who has built his dream E21 from scratch. This car represents everything that’s great about the modified car scene; it’s the result of a lot of blood sweat and tears and it is a true labour of love and built with only one thing in mind. This is a six-year build of the very highest quality and Ben enjoys his E21 for all the right reasons. For him, time spent with friends at shows and meets means everything. So there we have it, one of the finest and most individual E21s in Europe, built by a true enthusiast, and we have nothing but respect and admiration for Ben and his awesome BM.

“The engine bay, which has been repainted and smoothed to within an inch of its life, now plays host to a modern heart in the shape of an M50B25”

THANKS Thanks to Walton Motorsport, Stellar Paintworks and Absolute Customs

“Ben’s E21 is brought closer to the floor thanks to a custom GAZ strut and air bag setup, all kept in check by AutoPilot V2 management” 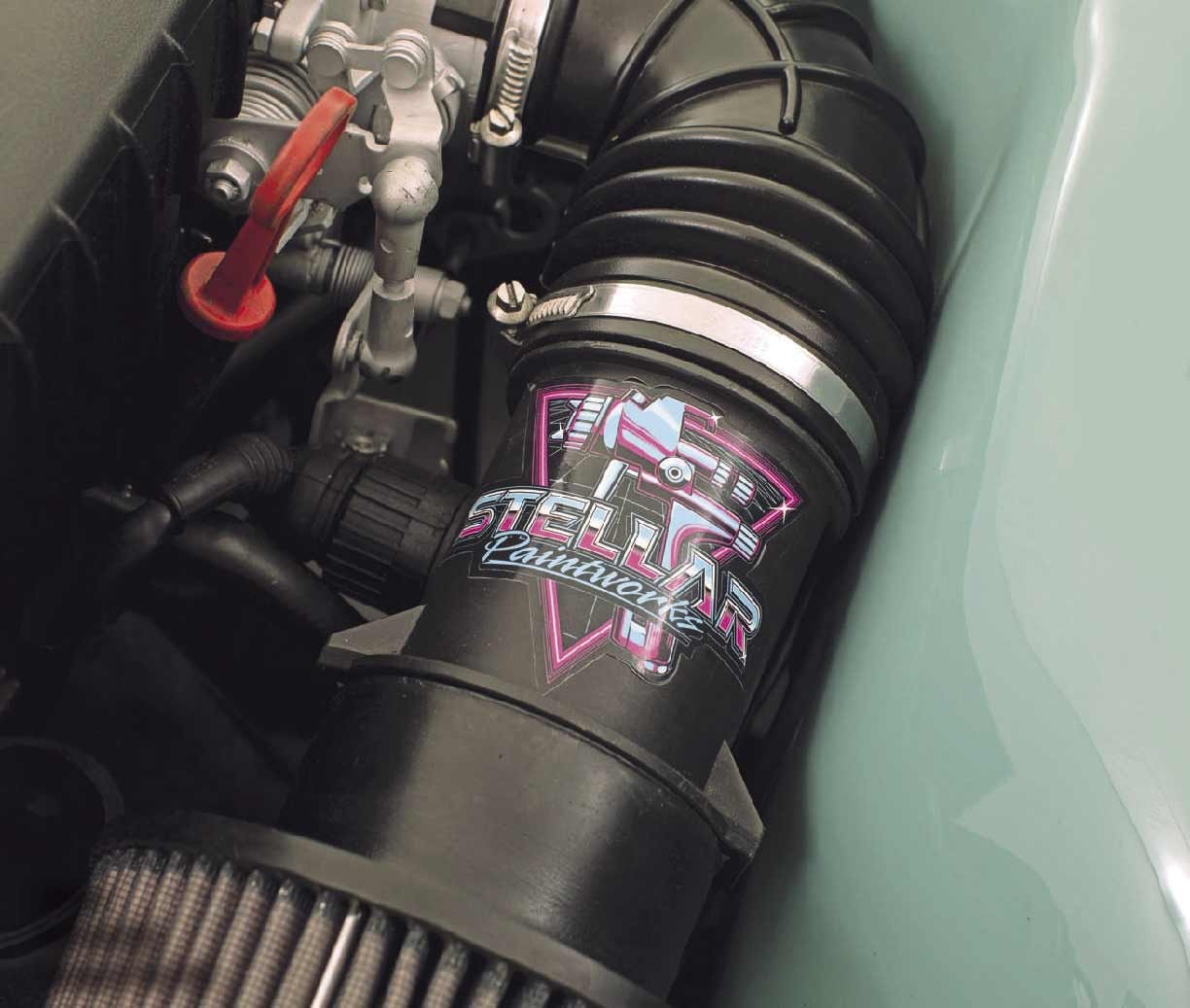 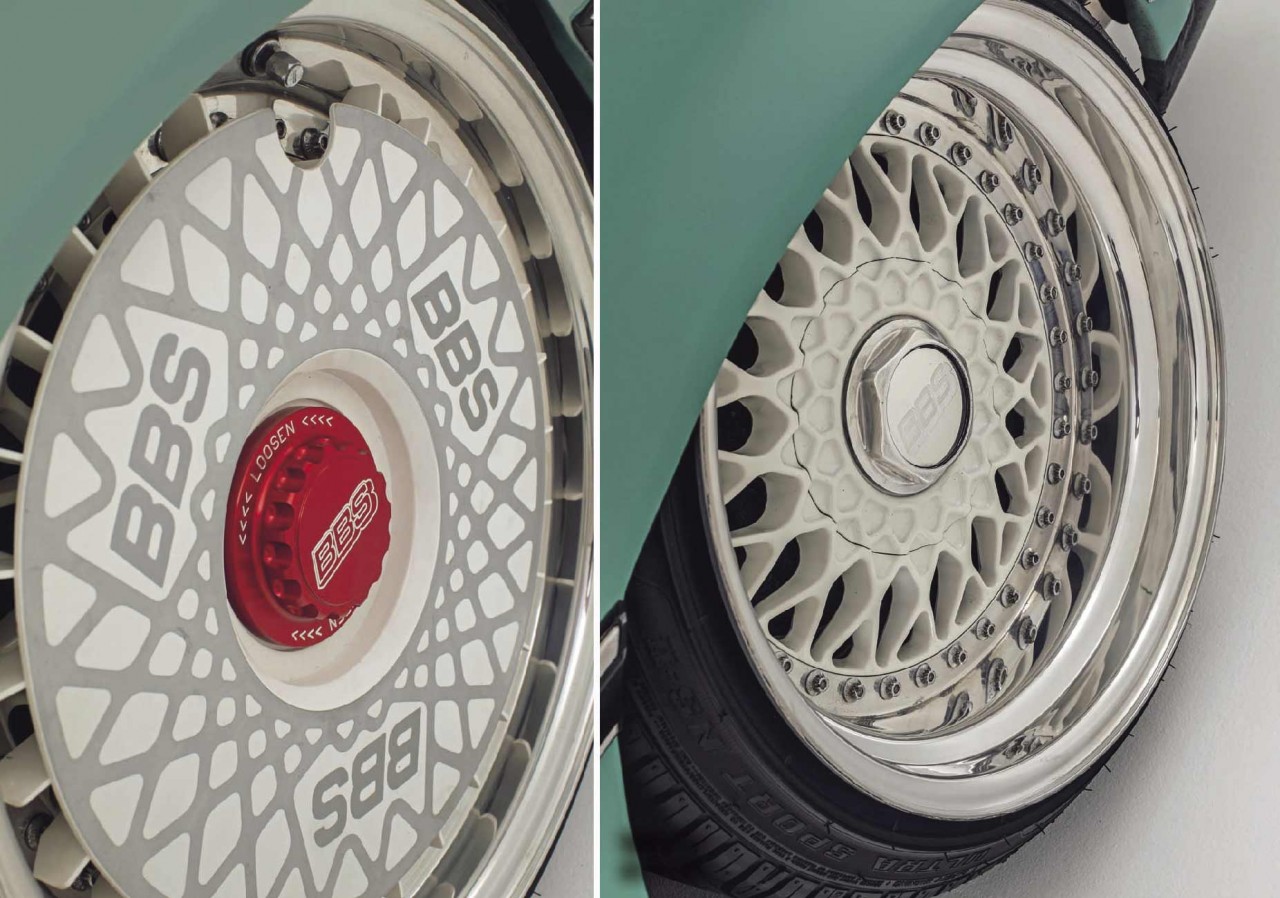 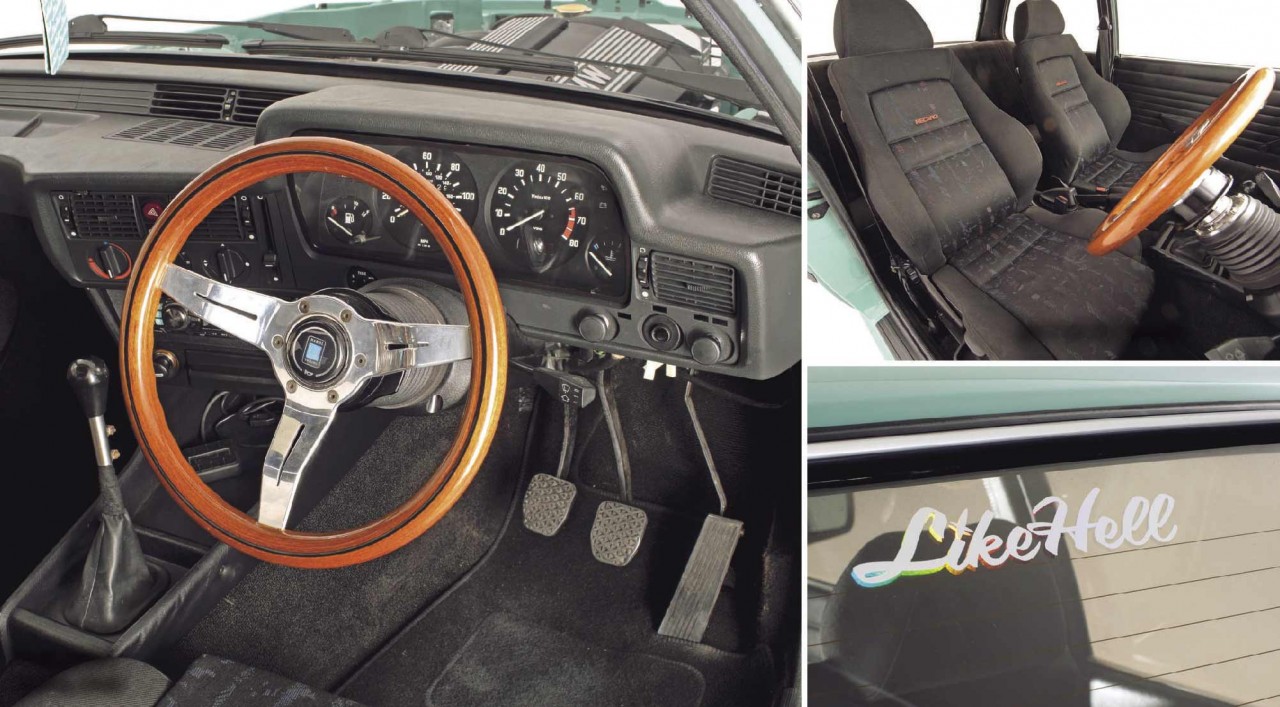 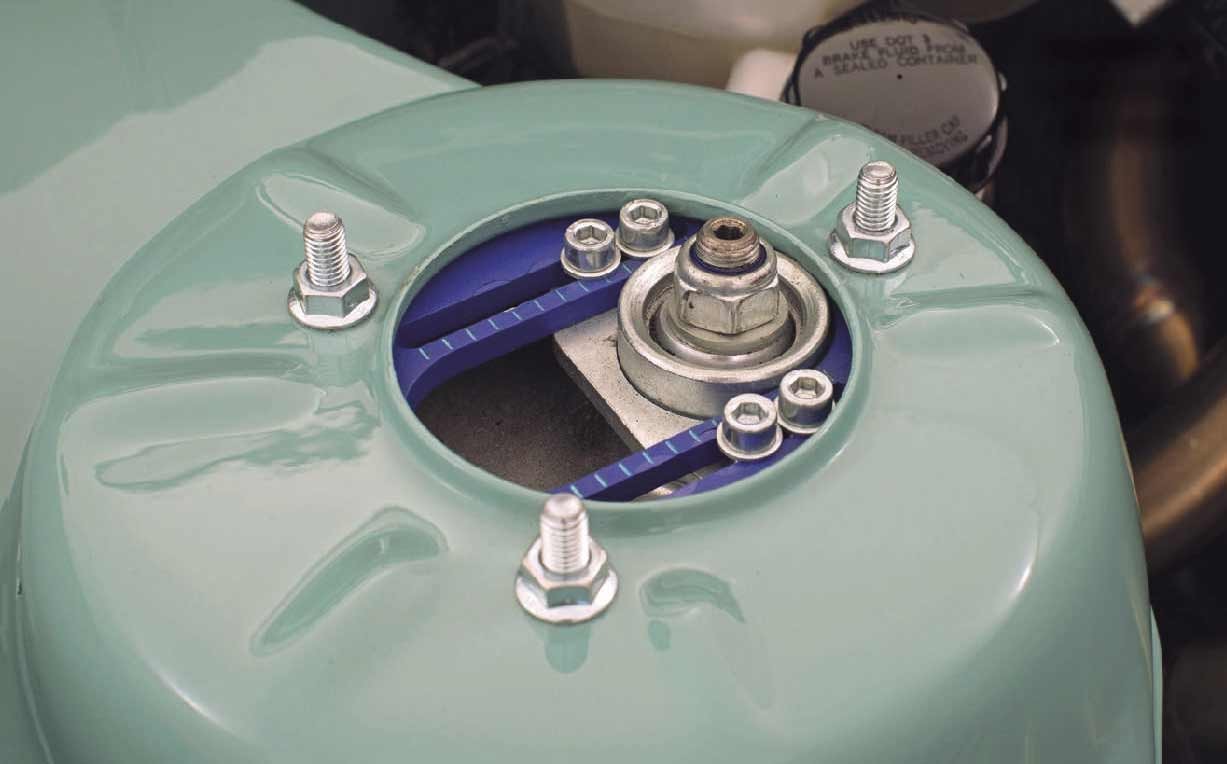 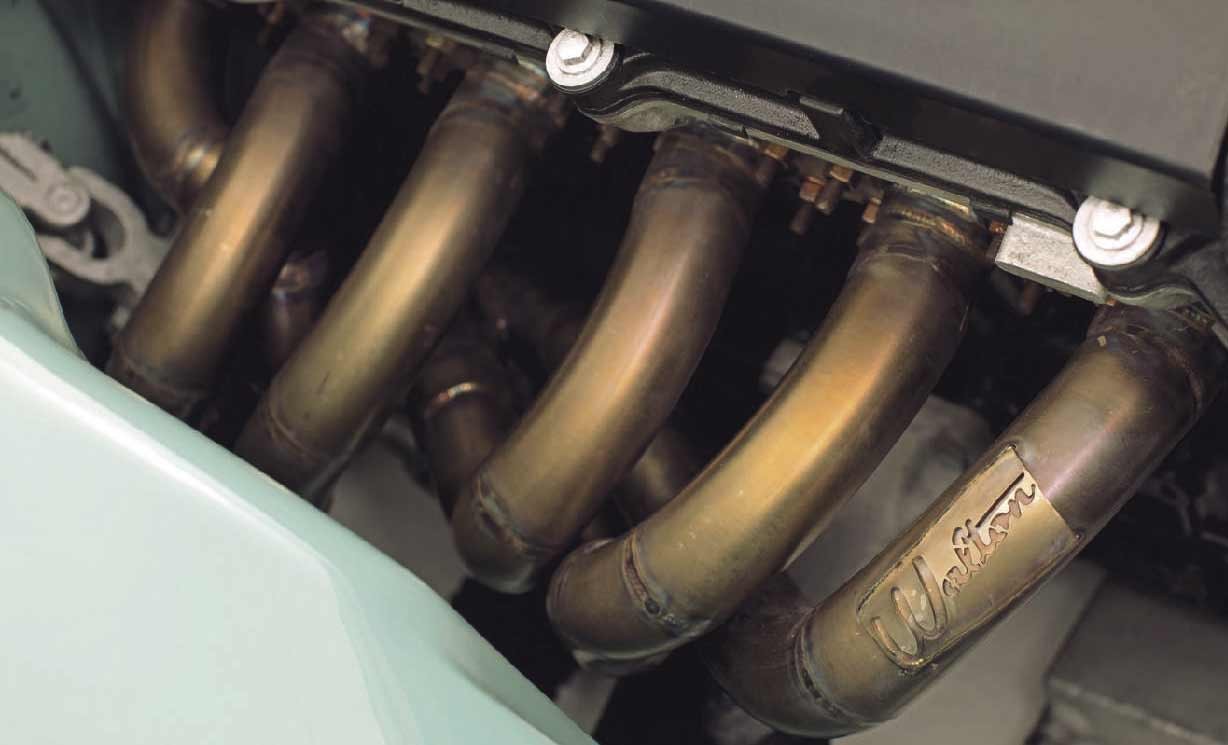