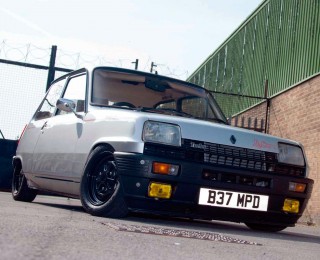 ‘80s rare R5 le car turbo French Slick. The engineers at Renault we’re once keen to slap a turbo on every one of their models in the 1980s. This little Le Car though, must be one of the rarest blown hatches ever… it could even be a sole survivor! British R5 Le Car 2 Turbo This has to be one of the rarest sights ever seen in Retro Cars. We’ll eat our berets if you can show us another that’s still on the road.Retro Ride Renault 5 Turbo. Words: Jarkle. Photos: Davy Lewis.

Renault were on a roll in the early ’80s, their hugely powerful (and it must be said, hugely unreliable) F1 cars really were doing a great job of promoting forced induction as the engine technology of the future. Of course, the company sought to capitalise on this turbocharging expertise, and many of their cars from the 1980s have gone on to be cult performance classics. Even mundane models like the Phase 1 R5 got a dose of boost. Most famously the snorting, rear-wheel drive, Maxi turbo built to enable Renault to go Group B rallying. But also the more affordable front-wheel drive variants, badged through most of the model’s life as the Gordini Turbo. 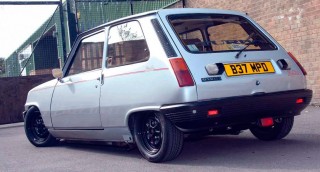 These cars were at the cutting edge of road-going turbo technology for a while, even if the engines being boosted had been used for decades already. Nowadays any ’80s Renault is a rare sight in the UK, with rust and wear and tear accounting for the vast majority of cars before the turn of the century. This means that turbocharged variants of the 5 – like the Le Car 2 Turbo you see here – are now firmly in single figures. And the owner of this example, Adrian Fletcher, reckons his is the only one of its type left on the UK’s roads.

“I know of about six others, but they’re all off the road and really rotten,” says Adrian. “I’ve had this car for a while now, though I owned another when I was in my late twenties and swore I’d have another someday.”

This car eventually turned up and though his girlfriend wasn’t especially happy with the prospect of another Gallic motor taking up his time, Adrian eventually took the plunge and bought the Le Car. “I waited until she was on holiday in America for a few weeks, then snuck off to buy the R5!” 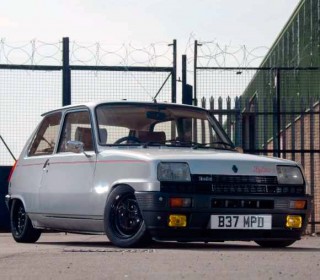 Adrian’s car was built in 1985, making it a very late example, hence it being badged as a Le Car 2 Turbo instead of a Gordini. Crucially, and unlike the vast majority of its brothers and sisters, this 5 was in structurally sound condition, with its 1.4 C6J Cléon engine also in good health having only trundled 17,000 miles from new. Adrian ran the car for a few months before pulling out and stripping down the engine over winter, with a plan to eventually run EFI and ITBs on standalone Omex management.

“The whole project hinged on the Groupe 2 inlet manifold, a part that took three months to find and buy from Germany. Even that caused hassle as it was designed for a LHD car. So I carefully cut the bulkhead and inner wing out to give enough clearance without compromising the pedal box,” muses Adrian.

The plan to run electronic fuel injection meant modifying the flywheel to circumnavigate the odd OE trigger pattern, plus retrofitting a revised fuelling system with Jenvey fuel rail, Golf injectors, custom tank and 3.5bar FPR. 40mm tapered Jenvey throttle bodies were fitted to the manifold, a rare Mecaparts cam slotted into the head, and the turbo system given an overhaul with a new T3 unit and a novel cooling system.

“The gearbox sits right in front of the engine, with a long gear selector rod running under the car. Space is tight and we couldn’t run a front mounted intercooler as you would on a modern tuned turbo car, at least not without ruining the front end.” 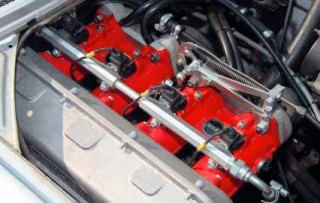 Adrian ended up running a charge cooler, with a 12v electric water pump pushing coolant round a custom unit comprised of a Fiat 500 radiator (here used as the pre-rad) and a barreltype charge cooler, the latter found on US eBay. This setup has proved ultra effective, running just six degrees above ambient temperature. Power is reckoned to be 170bhp at just 7PSi (and all in a car that weighs just over 700kg), though Adrian plans to fit a larger turbo and run more pressure next year. 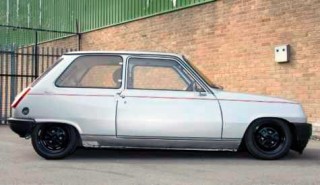 “The tiny factory clutch is a bit of a hurdle when it comes to more power, but I’m sure we’ll find a way. The Omex ECU has the provision to run launch control as well, which I’d like to sort out, if only because it’ll be hilarious,” chuckles Adrian Chassis wise and it’s all as Renault intended, albeit it much, much lower to the ground. Indeed, at its lowest point this R5 is just two inches off the tarmac, thanks to the fact that Adrian’s drastically lowered the front and rear torsion bar systems, with Koni front dampers and SPAX Race rears. The car actually came with discs front and rear, and though hardly the most confidence inspiring setup in the world, they’re more than capable of hauling the R5 to a stop.

It’s a similar story with the interior and the exterior bodywork; both are near enough totally stock, and booth ooze effortless retro-cool. There have been some minor tweaks to the dash though, with Adrian replacing the aftermarket boost gauge fitted by a previous owner with a standard one, and modifying and fitting a period correct Blaupunkt headunit with an iPod aux plug. 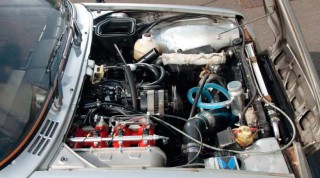 “The car didn’t come with speakers from the factory. I didn’t want to mess around with it, but I wanted to hear music on longer drives! I’ve fitted a pair of small 10cm speakers now, though they’re pretty well hidden” This is now an exceptionally rare car, and one that’s caused Adrian more than his fair share of headaches. “I’ve grown used to my European postage costs being higher than the price of the component in question,” he says.

The car is a significant part of not just Renault history, but also of production turbocharged cars, dating from a time when forced induction was something of a dark art. It’s also seriously cool. And you’ll see many a surprised face when this thing screams off the line in launch-control mode!

Something tells us he’s been messing with that torsion bar! Transverse engine? Not a bit of it!

THANKS: Omex Technology for all their help in sourcing parts; Paul Hughes for wiring it all up; Guy Higgs for mapping it; and my misses for her patience and understanding.

Jarkle COOL Marque has not set their biography yet