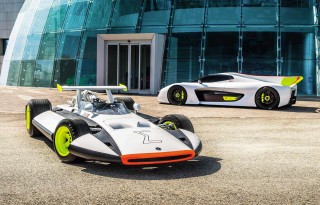 Inspired by the past Pininfarina concept cars A car from the past inspiring the future. Four decades separate these two Pininfarina show cars – yet they share far more than meets the eye. Words Massimo Delbò. Photography Jayson Fong.

Paolo, design something to prevent crazy racing drivers killing themselves!’ This was the simple instruction Pininfarina designer Paolo Martin received from his boss, head of Pininfarina Centro Stile, Franco Martinengo, back in late 1968. The answer, after a few months of intense work, was the Sigma Grand Prix, introduced as a show car at Geneva in 1969. 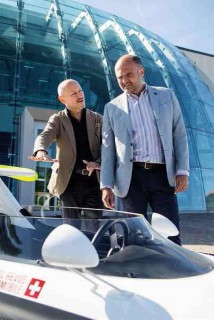 ‘We got immense coverage and the Sigma became an immediate hit,’ remembers Paolo Martin, ‘because the car was backed by the Swiss Automobil Revue magazine and many of the most important managers in the car world.’ It is worth remembering that, in the late 1960s, the proportion of fatal crashes in racing was tragically high, and manufacturers realised that safety was soon to become one of the most important topics, in both racing and production.

‘The task assigned was a surprise to me,’ says Martin, ‘because I had never seen a Formula 1 car in real life before, and because this was not a designer task: Sigma had to be a concept full of ideas to make a racing car safer. What amazes me most about the Sigma today is that the ideas I put into the car, even if sometimes they have been realised differently elsewhere, became reality in racing.’

Something else unforeseen almost 50 years ago was that, in 2016, Sigma would became the inspiration for a new creation by Pininfarina: the H2 Speed. The father of the H2S is Fabio Filippini, current head of Pininfarina design, and the first to see the link. ‘When we showed the car at Geneva earlier this year,’ says Filippini, ‘onlookers were surprised at this connection, because they didn’t see a shared design between the two cars. The reality is that both the H2S and the Sigma started their life as a brainstorming about the future of cars, made real. When I was assigned the task to create a car for the 2016 Geneva Show, having the same short time given to Paolo Martin, the set goal was to share with the world our idea about the future of sports cars. I was very far from thinking about a “continuation” of the Sigma.

‘The similarities between the two projects arose while I was working on the H2S, when more and more I realised that the approach we were using, building the Pininfarina concept of the future, with fantasy our only limit, was the same used by Paolo Martin back in 1968. When we started to joke about the Sigma heritage, we discovered that many details on the H2S could easily find a direct link to the ideas behind the old car, and at this point it became impossible to resist playing with the colours and the “high-visibility” stripes to enhance this.’ 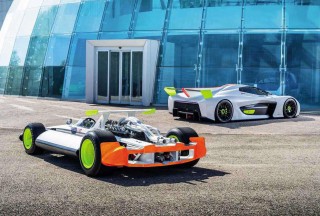 With the Sigma, Paolo Martin had imagined the future of safety, a topic that only became hotter in the decades that followed. He began with parts found in the Pininfarina warehouse, left over from a Ferrari 312, consisting of front and rear suspension with wheels, the pedal structure, plus the engine and transmission.

‘There wasn’t a complete chassis, only these parts and unwelded tubes. I built a chassis based on my taste and needs as a stylist, but if you look at the original blueprint, where there is the indication of a wheelbase, I put a question mark. And I don’t think that even today anybody has ever measured it, but it should be around 2400mm long.’

From that ‘chassis’ Martin developed his idea of a safe racing car. ‘My first draft was of a sort of detachable cockpit, capable of “sliding away” from the car in case of fire or impact, but technology was not advanced enough even for us to imagine a real application for this, a concept that in recent times has been studied for aeroplanes of the future.’ What Martin did use from the aircraft industry was aeronautical safety tanks, made in rubber and with foam inside to avoid spills and cracks, in this case protected by a metallic rigid structure. He then added a battery cut-off outside the car, close to a switch that activates an internal fire extinguisher system. 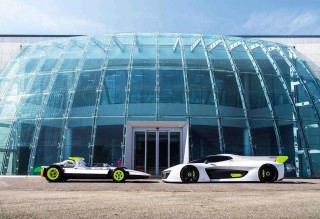 The chassis was intended to deform in the case of impact, helping the driver to survive the deceleration, while the cockpit was padded and fitted with a deformable dashboard. The wing, to prevent its detachment, was fixed in position at the centre of the car, where it couldn’t be hit by other competitors, and its struts were made strong enough to ensure that the structure could act as roll-over protection as well.

Seatbelts were part of the cockpit from the beginning, while an advanced system to protect the driver’s neck – a prelude to the modern HANS device – was added at the last moment. ‘I suddenly realised that the neck was vulnerable, and the same day that the car was loaded into the truck to be shipped to Geneva, I “invented” the neck retaining system, taking a seatbelt roller from a car, and attaching it right at the back of the cockpit about five minutes before the car was shipped,’ says Martin.

Now, four decades on, the same fantasy effort has been demanded of Fabio Filippini: to imagine the sports car of the future.

‘I started with the trend of eco compatibility, something already important but still new, and that, to our minds, will develop further in future. We see limits in electriconly vehicles, because of their range, but we see huge development possibility in hydrogen-powered vehicles. Hydrogen – H is its chemical symbol – is a fuel that, already, is absolutely safe and reliable and ready to be used, its only limitation being infrastructure. But if we think of a city bus, or delivery vans moving from the suburbs into city centres and back, hydrogen could easily be used today.’ 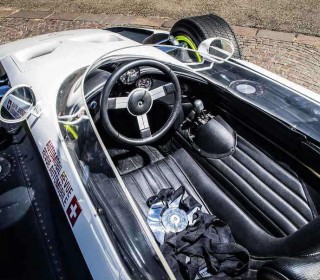 With this in mind, Filippini specified a rolling chassis from the Swiss company Green GT, founded several years ago by a highly qualified team of Formula 1 engineers who presented their first racing car in 2008, powered by a hydrogen fuel cell system.

‘After we received the rolling chassis, one of the main tasks to solve was where to put the fuel cells and the hydrogen tanks. We knew that we needed three tanks for the hydrogen, and the best way to configure them was to split them: two larger ones at the sides, and a smaller one in the centre together with the fuel cell, behind the cockpit. They were by far the biggest components, and from there we went on with the design: when my team showed me a concept based on two opposing triangles, I knew we had it,’ says Filippini.

The H2Speed, he adds, is exactly this: two triangles, so arranged as to cross each other. ‘This initial shape and its concept was so right that everything else fitted in: the tanks on the sides became a visual point, able to enhance the lower part of the car. They are so strong that they can resist an impact of five times that required to pass the modern F1 cockpit crash test. When we studied the rear air intake, we simply opened a natural “cut” where two sides of the triangles merge, and the same is true for the air intake on the top of the roof, which is framed between the protuberances of the roll-bars.

‘We believe aerodynamics will remain important but be better integrated into the design, for a clean shape. One of the major tasks for us was to create a car that could be easily positioned in today’s market yet, at the same time, would not resemble any other existing supercar or be identified with a specific brand.’ 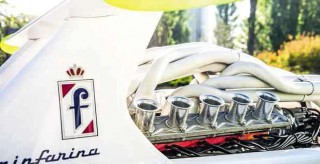 It is a dream of every designer to have the opportunity to design a supercar, with no limits except fantasy. On the evidence presented here, it seems Pininfarina managed do so twice.

Top left and above right Sigma (in foreground) took safety as its inspiration and translated it into racing-car design; Pininfarina’s Fabio Filippini (on left) explains the show cars to Massimo Delbò.

Above While they’re nearly 50 years apart, H2Speed (on right) develops many of the Sigma’s themes, not least of which is the colour scheme. 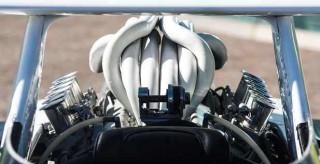