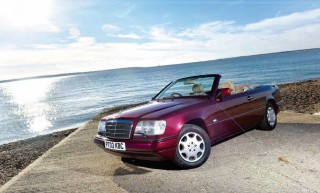 YOUNGTIMER SPECIAL 25 years after the launch of the 124-series cabriolet we drive a mint E220 to the south coast.

Winter had officially arrived in the UK and the clocks had gone back. And so had we, in spirit at least, to the mid 1990s when the Mercedes-Benz 124-series proudly dominated Europe’s middleweight quality car sector, as popular in the Frankfurt taxi ranks as it was in city business sectors and secluded suburbs. Even as it neared the end of its 13-year reign there was no sign of it wearying, or overstaying its welcome. 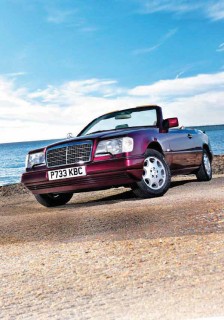 That was party due to the sheer diversity of the range: saloon, estate, coupe and convertible models, and engines from two-litre four-cylinder to five-litre V8; six-litre if you count AMG’s most ambitious, E60 reworking. Had Mercedes carried on building the 124, people would have probably kept on buying it, but a new and significantly modernised generation of Mercedes was waiting in the wings, the 210-series, and after a production run of over 2.7m the conservatively styled and much loved range bowed out.

The very last to go was the cabriolet, discontinued in July 1997, two years and a month after the saloon was retired, its extra life due to the absence of a 210-series convertible. It would be reborn as the CLK cabriolet, based on the C-Class rather than E-Class. And it was this last of the line, ‘A124’ model that was going to take us for an out-of-season, early winter’s visit to the south coast of England. It was a trip I had looked forward too: I love visiting seaside towns once the candy floss toting legions have departed, leaving the places thinly populated, tranquil and with lots of parking spaces in the centre.

If even in high summer it pays not to expect much of the UK weather, you face very poor odds of seeing the sun any time after late October, and should it make an appearance it will be gone by 4pm. But we were in luck, for our Wednesday was one of these rare beautiful, cloudless November days. It was cold, but that doesn’t matter when you’re driving a 124 cabriolet, as Mercedes-Benz engineers, as they always do, ensured it was fit for purpose. The multi layered hood with its glass rear screen insulates and fits snugly when raised, and when it’s lowered, the heater is easily powerful enough to keep the lower cabin warm, standard-fit, two-stage front seat heaters further adding to the sense of cosiness.

Indeed even though this particular example, borrowed with thanks from Hampshire classic Mercedes specialist Charles Ironside (www. charlesironside.co.uk/01420 520635), was the UK base model E220 Cabriolet, its late, 1996 manufacture saw it well equipped. Included in the new price of around £43,000 were alloy wheels, a four-speed automatic gearbox and leather seats; additionally this one has electric memory seats, air conditioning and a wood and leather steering wheel, piling £3,800 on the bill. Charles was asking £14,950 for the E220, this price reflecting the low, 53,000 miles covered and the excellent all round condition. 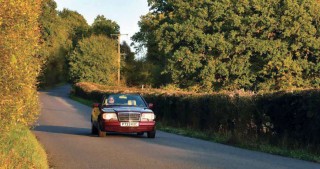 I recently drove the new S-Class cabriolet and was amazed at the silent lowering and raising of its hood. Things weren’t quite so sophisticated when the A124 was introduced in September 1991 at the Frankfurt motor show. To lower the hood, you must first undo two catches at the top of the windscreen and push the front of the canvas skyward, then hold back a flashing red knob on the centre console to allow the electro-hydraulic motors to take over.

Twenty-five seconds of whirring and bumping sees the hood folded back and swallowed up under the type of metal cover behind the rear seats that Mercedes-Benz first used on the SL Pagoda 53 years ago.

With the windows dropped the A124 boasts the graceful, uncluttered profile that Stuttgart’s droptops have long been famous for, but the sizeable hood has to go somewhere. It takes up so much boot space that it was a squeeze getting all photographer Terry Oborne’s bags and lights in. We headed off from Charles’ place to pick up the A32 heading south, a road ideally suited to al fresco cruising. It’s pretty, winding and not too fast, and sandwiched between two major routes, the A3 and A31, so isn’t busy.

I had my seat heater on high, but soon reduced it to low when it became too warm, but what’s delivered from under the bonnet isn’t so hot. Mercedes’ 16-valve, 2.2-litre, four-cylinder M111 engine makes 148bhp and 155lb ft torque, and that, with the E220 Cabriolet lugging 16 per cent more weight than the same model coupe, doesn’t produce fireworks. I can see why Mercedes-Benz never offered the E200 (134bhp/140lb torque) in the UK. But that was how Mercedes did things two decades ago, and there was clearly not widespread customer dissatisfaction, the E200 and E220 outselling the six-cylinder E320.

E220 performance aside, the way the A124 looks after you is wonderful. The electric seats are infinitely adjustable for position via the seat-shaped switch on the door, and the unmarked tan leather is gorgeous. And I love the part wood rimmed steering wheel, which I’ve never seen before on a four-cylinder 124.

This one has a few hair line cracks on the wood portion, but it’s barely noticeable and if this was my car I’d live with it rather than pay £1,805 to Mercedes-Benz for a new one (it’s still available).

To minimise the wind buffeting, it’s best to keep the four windows up, and this allows normal conversation up to about 50mph.

Mercedes, incidentally, still supplies a wind break for the A124, but at £985 you might be happy to settle for one from accessories specialist Classic Additions at £145.

We headed south to the coastal town of Gosport, which along with Portsmouth on the other side of the harbour, is known to all for its navel base, and then on to Lee-on-the-Solent, known to a lesser number of people for its hovercraft museum. Rising on an air cushion, these vast, propellered vessels once offered the fastest English Channel crossing, but were killed off by the opening of the Channel Tunnel in 1994, and now sit decaying in a locked yard. It’s always sad to see redundant technology, I feel.

Parked up, the E220 Cabriolet in its lovely Almandine Red metallic hue attracts plenty of admiring comments. And it’s hard to not be taken with its understated elegance: no plastic body extensions, and a wheel design of a mere 15-inch diameter that does not aggressively show off big brake calipers.

By the time Terry’s photography was finished, the sun and light were fading fast, and we’d had enough fresh air for one day, so it was time to raise the fabric hood and treat the car as a coupe. At the time, the 124-series cabriolet was the pinnacle of refinement in convertibles, more so than the R129 SL roadster that had been launched only two and a half years earlier and which had a plastic rear window and partially exposed hood frame inside the cabin. There is some wind noise, but overall the A124 still impresses in this respect, and feels more than refined enough for all-year-round transport.

The A124 is a gem: interesting, great for sunny summer days (and also for sunny winter days), modern enough to serve as everyday transport, and still affordable. But judging by the market, that last benefit may not endure.

It was cold, but that doesn’t matter when you’re driving a 124 cabriolet, as Mercedes’ engineers ensured it was fit for purpose.

Included in the new price of around £43,000 were alloy wheels, four-speed automatic gearbox and leather seats. 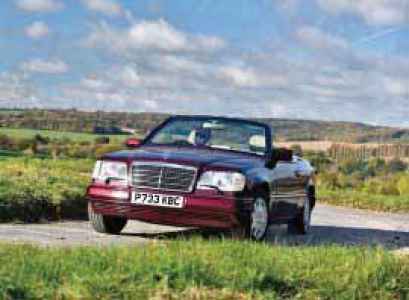 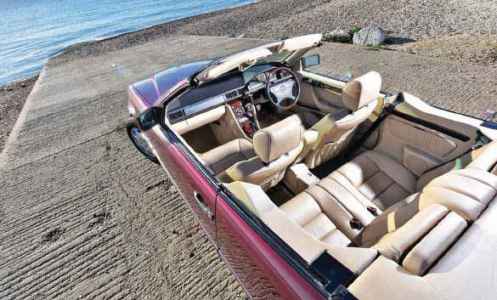 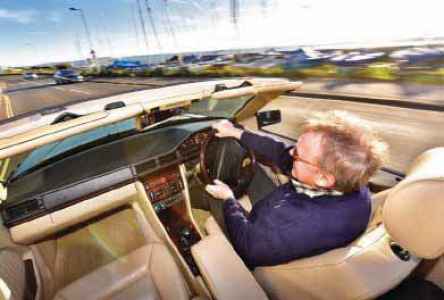 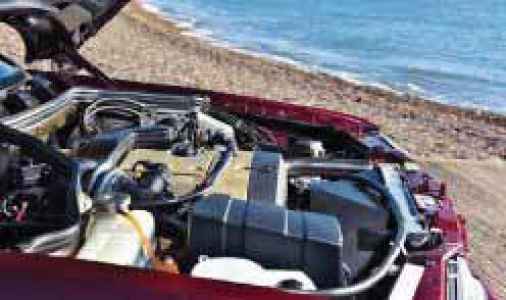 Figures for car as pictured; fuel consumption according to EEC urban. Multi link rear suspension a big blessing. The 124 cabrio never received a V8. Same length as coupe, but much heavier. Roof system relies on some driver effort. A slightly more athletic feel than the SL. The car looks good against any backdrop. At the time, the 124-series cabriolet was the pinnacle of refinement in convertibles, more so than the R129 SL roadster.

A124 The inside story

Frank Knothe, former Head of Overall Vehicle Development at Mercedes-Benz, worked on the convertible 124-series in the late 1980s and reveals that Porsche helped develop it.

When did the 124-series project begin?

The first thoughts on the development of a cabriolet were in the early times of the W201, the first model with a cabriolet prototype for testing purposes. But no decision was made to start production of a cabriolet – this was made later, for the 124, between 1988 and 1989.

What changed between the 123- and 124-series models to make a cabriolet version viable for the latter?

Deriving a cabriolet from the 123-series coupe would have been technically possible. But I guess that due to market and capacity reasons, this decision was never taken.

How many engineers worked on the A124 project?

There was already an existing team at Mercedes-Benz who worked together before the A124 project and also afterwards. Mercedes-Benz had the project lead and production was undertaken at Mercedes-Benz, but some of the necessary changes to the car were made at Porsche Engineering. So it is impossible to name an exact number of engineers.

Was consideration given to a folding metal roof?

Producing a folding metal roof was not an option, the time wasn’t ripe. The R129 SL also had a textile folding top, and there was the fact that the cabriolet was based on the 124 coupe, meaning there would have been a massive intervention into the rear end of the car, with a huge impact on storage volume, components and design. We thought that couldn’t be the solution, and even the successor, the A208, had a textile top.

Was there a conflict between body strengthening and minimising weight increase?

There is always a conflict between weight and structural strength, torsion and bending stiffness, and the crash characteristics of a car, especially rollover protection.   Things get very complicated if you try to implement a specification that the car should have the same weight as before. To achieve an appropriate form, which means safety for occupants, we had to work with reinforcements, thicker sheet thickness and high strength metal.

Can you say more about the four vibration absorbers in the left damper, roof frame and boot?

These absorbers are spring-mass systems which are calibrated on a critical frequency of parts or systems, reducing their maximum amplitude. The vibration absorbers were installed in the A124 to reduce vibrations from the roof frame, the torsion and bending vibrations, helping achieve a high level of driving refinement.

During development, how many 124 cabriolets did Mercedes expect to sell?

The expected sales quantities were topped by the near 34,000 units produced and sold.

How the A124 Evolved

When Mercedes launched the 124-series droptop it was offered in just one, upmarket guise, the three-litre 300CE-24 Cabriolet, available with a then new five-speed automatic gearbox. This is a rare model, most early A124s the 320CE introduced in October 1992, using a 3.2-litre development of the 300CE-24’s multi valve M104 engine, and producing 217bhp/229lb ft torque.

In June 1993 the whole 124 range was facelifted and rebaged with an ‘E’ prefix, the 320CE becoming the E320. These cars are identified by the star badge being mounted on the bonnet, not the grille (collectors now call the pre facelift cars ‘big grille’ 124-series). At this point the A124 range was extended to include the E200 and E220, and also the Affalterbach engineered E36 AMG with 268bhp/284lb ft, built in very small numbers.