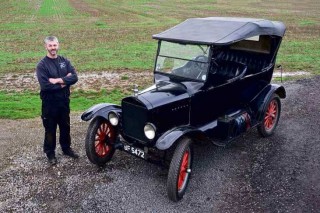 Busy Tin Lizzie. Richard Rimmer found his Ford Model T in the US, has taken it to France, and reckons it’s painless to own. Words and photography Paul Hardiman.

The car led to the business, the business enhances the car. Richard Rimmer bought this 1925 Tourer from the US 12 years ago, which led the rocket instrumentation engineer to work on Model Ts and start his own business, with an MoD mentality for work standards.

Mostly, it’s just because he likes the car. ‘I’d sold my house to buy a 964 RS, which I still own, and I’d started on Beetles, but you get to an age when you want an old car. Austin Sevens were a bit small, so I wanted something bigger. I’d imagined that Ts were £30,000 or so, but then I discovered theywere affordable.

‘Model T Haven in Kansas has about two acres of junk and cars for sale, This one was restored in the ’60s, the owner had died and the family kept it. T Haven changed the radiator and did some wiring so it was a running, driving car, but I’ve improved it since.’

Richard is modest about this, but one of the specialities of his business, The T Service, is making Ts drive properly, especially overhauling the front end to eliminate play and slop. It’s a revelation the first time you try a rebuilt one. His car now sports Rocky Mountain brakes on a Ruckstell two-speed axle, which gives extra intermediate ratios. ‘It just makes the car easier to drive, but it’s handy at Kop Hill, four-up.’

The Buckinghamshire hillclimb is just one of Richard’s adventures, which include visiting

Hyde Park several times for the start of the London to Brighton Veteran Car Run, and a trip to France. ‘It’s also got a high-compression head, bringing the ratio from about 4:1 to a heady 6:1! It’ 11 do almost 50mph, which isn’t very kind to the car, but it’ll sit all day on 40. If we tow it, it’s just because of lack of time, but we’ve done about 500 miles around the Loire.’

There’s a Motometer temperature gauge, and a period running-board luggage rack shielding a 1920s Boyco set of auxiliary tanks - water, oil and petrol - plus a Shell petrol can. ‘The front numberplate is plywood. When I imported the car I got the number from DVLA the day before an anniversary run, so I had to make something quickly... and it’s stayed ever since, The red wheels are wrong, but they were that colour when we bought the car, and I don’t care.

‘It ran a little-end bearing - even Ts chuck their toys out of the pram occasionally - but they are usable, easy to fix and parts are available. I didn’t want a car so rare that if it breaks you wait ages to get a part made. With the T you just pick up a catalogue. People like these black-era cars because of Laurel & Hardy, The brass-era cars [to 1915] have their devotees but they’re more expensive.

‘It’s the last car to get any attention, due to the demands of the business, but we don’t worry about it. It starts and away we go.’