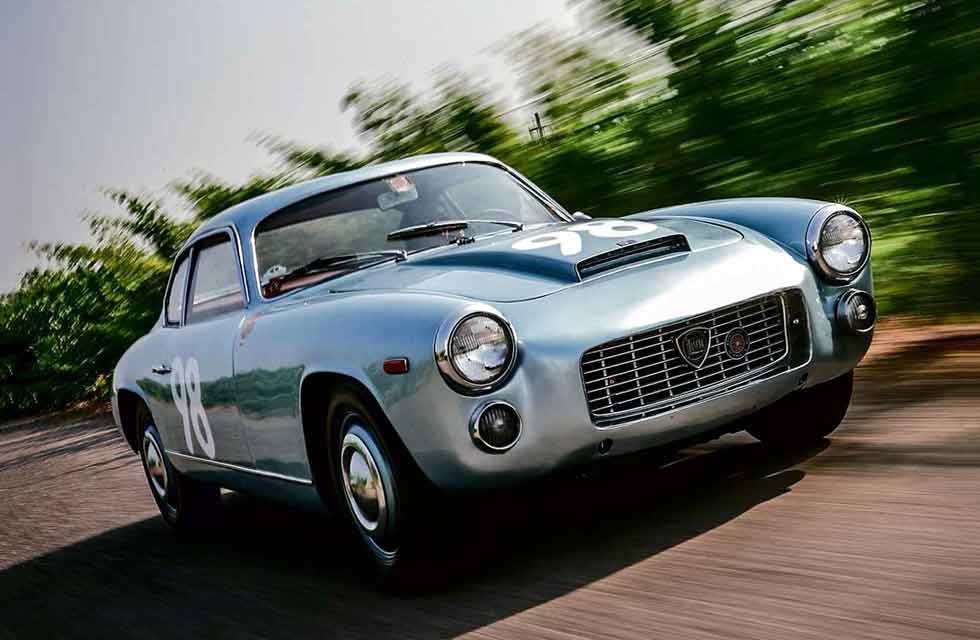 This Zagato-bodied Lancia Flaminia Sport had the same owner from 1963 to 2018. Drive-My meets the man who owned it, raced it, abused it and loved it. Words Massimo Delbo. Photography Thomas Macabelli.

Used and abused but always loved and campaigned by Toly Arutunoff

Today, all too often, when people buy a brand new big- ticket supercar they collect it, drive it home, plug in the battery maintainer and leave it parked until they sell it, at a profit, with ‘delivery mileage only’ The American collector Jim Glickenhaus, a man who loves to drive his cars, described this approach as ‘dating the most beautiful woman in the world but never sleeping with her, to make her future husband happier’. But, back in the 1960s, the joys of living were quite different and far less motivated by the desire to make money from a hobby. Back then, many GT owners took long and challenging journeys across continents as they tried to live their lives at full speed. To them, cars were meant to be driven and raced.

Toly Arutunoff – more formally Anatoly Armaisevich Arutunoff – is a perfect symbol of that era. He was the first of his family to be born in the USA (in Oklahoma), and he fell in love with cars and racing at the age of 20 when, during a trip to Italy in 1957, he assisted with the final Mille Miglia. He raced and set speed records with all sorts of cars including Cooper-MGs, Abarths, a Bristol 407 Zagato, a Corvette, a Porsche 356 Carrera Speedster, Ferraris and a Lancia Stratos. He even became one of very few people to race a Lamborghini Miura.

In 2008, after 50 years as an SCCA member, he wrote a memoir entitled One Off in which he dedicated only three chapters to aspects of life other than racing, ‘The shine on the glaze on the cherry on the frosting on the cake’ is one quote. I leave it to you to imagine the topic.

In March 1963, aged 26, Arutunoff ordered a Lancia Flaminia 2.5 Sport 3C Zagato, chassis number 824.13.3731, from the American importer and Lancia distributor Max Hoffman. It was in Grigio Metallizzato, with a red and black interior.

So, what exactly had he bought? The Flaminia range, launched at the 1956 Turin motor show, spawned no fewer than three coupe derivatives in 1958, which is why it is one of the few model ranges in history in which coupe sales overshadowed those of the saloon, They were offered with a 2.5-litre V6 to begin with, replaced by 2.8-litre versions late in 1963.

The regular Flaminia Coupe, on a shorter wheelbase than the saloon, was designed and built by Pininfarina. The neat GT by Touring and the curvaceous Sport by Zagato (later the Super Sport, with the larger engine and recessed headlights), had a yet shorter wheelbase, The Sport, the coupe that Arutunoff bought, was designed by Ercole Spada and built by Carrozzeria Zagato in aluminium alloy; 342 Sports were built and 183 Super Sports.

These were sophisticated cars with double wishbones up front, de Dion suspension at the rear and four-wheel disc brakes, the centre of gravity was low and a rear-mounted transaxle gave excellent weight distribution.

The body-coloured steel wheels of Arutunoff s Sport 3C wore polished hubcaps, soon removed for racing purposes, and with its three Weber 35 DCNL carburettors (hence ‘3C’) the V6 delivered 140bhp. Customers could choose whether or not their car would wear Zagatos trademark double-bubble roof; Arutunoff specified his thus-equipped, and was so happy with his purchase that he kept his Lancia until 2018, when it was sold in Italy.

Back in the 1960s, having regularly enjoyed his Flaminia Sport on public roads, Arutunoff entered it in the Sebring 12 Hours. It wore Auto Racing Club of Oklahoma colours and the results during qualifying were amazing: the car finished around 30 seconds faster than the Ferrari GTs and Corvettes, though sadly it did not start the main race because the distributor broke. If you wonder how the Lancia could have been so fast, here’s the answer: ‘I think that this amazing result was connected to a mistake in reading the stopwatch by the timekeepers,’ says Arutunoff. ‘Most likely they misread the 30-second dial of the stopwatch as if it was a one-minute one.’

After Sebring, the Flaminia was shipped back to Europe and raced with little modification, representing the only American team racing in Europe in the 1963 season. Four races appealed most to Arutunoff: the Targa Florio, Le Mans, the Spa 500km and the Nurburgring 1000km. His registration for Le Mans was rejected, but Arutunoff and his Flaminia raced the rest.

The 1963 Targa Florio was scheduled for 5 May, on the gruelling roads of Sicily. In typical Arutunoff style he drove the car to and from the race, but when he showed up he discovered the organisers hadn’t received his application, ‘This was soon solved,’ says Toly, ‘as they declared that they were there to race, not to keep people from racing, and we were soon in.’ Toly’s Targa Florio was notable for another reason. Arutunoff met Stirling Moss at the hotel, with his BBC television crew. Moss asked to drive the Flaminia because he had never driven one before, so Arutunoff got to sit by the maestro while he lapped the Sicilian roads at speed. And the race itself? ‘It went well until the end of my stint on the 44-mile lap when, six miles from the pit, I ran out of fuel. A quick refill with a bottle at the side of the road was not enough, and I had to switch off the engine downhill, losing an incredible amount of time. We finished 26th overall. When we checked our timing after the race we realized that, without the time lost on that dry lap, we would have won our class.’

In pure gentleman-racer style, Arutunoff and his co-driver then drove the Flaminia 2500km from Sicily to Belgium to race the following weekend in the Spa 500km. They finished 23rd overall and third in class, the weekend after, on 19 May, they drove the Flaminia to Germany, entered the Nurburgring 1000km and, again, finished third in class – 33rd overall – despite a fairly significant problem. ‘When leaving Spa we were low on brake fluid,’ remembers Arutunoff. ‘Instead of checking the pads, which were most likely quite worn, I simply had a garage attendant refill my brake fluid reservoir, The problem is that he used an open can of fluid, which had lived close to an outside door in the rainy weather of Belgium. A few laps into the ’Ring and we had no brakes.’

The Flaminia was then registered for a club race at Silverstone, though the problem with the brakes (still not solved) meant Arutunoff did not start, then the Lancia was shipped back to the USA on the SS Cristoforo Colombo. ‘I crunched a sill against a concrete pillar while turning around to board the car on the vessel/ recalls Toly, The Flaminia didn’t return to Europe until 2000, when it was shipped on the QE2 to take part in classic car rallies in Italy (including a tour of Sicily to celebrate the Targa Florio), Switzerland and Austria.

Back to June 1963. Flaminia Zagato celebrated its return to the USA by going racing at the SCCA in Courtland, Alabama. In December, Arutunoff entered the now well- used Flaminia for the Nassau Speed Week in the Bahamas, followed by the Daytona 2000km in February 1964 in which, plagued by several problems, it failed to finish, ‘The engine blew up shortly after, and was rebuilt by the Nashville Lancia dealer,’ says Toly.

He entered the Zagato for the Sebring 12 Hours in both 1965 and 1966, but things did not work out as planned. ‘In 1965 my co-driver took out the distributor and couldn’t get it timed properly, even after trying for hours. So we didn’t start, which was a good thing because an axle broke as we were driving home, The next year, while loading the car onto the trailer, we heard an engine knock around 2800rpm. So I drove it the 1900 miles from Nashville to Los

Angeles, at 2700rpm maximum, to buy a Lancia 2.5-litre engine – not a triple-carb one – with a blown head gasket, from a man who had put a V8 in his Flaminia. Then I drove back.

‘Shortly after, I blew a piston in the original engine and the Flaminia remained parked in the garage for many years. It was my friend Tex Arnold, a fantastic mechanic, who finally built an engine using the two engines I had plus several more parts I had to buy.’

From then on Arutunoff used the Flaminia, equipped with a new Dagrada exhaust system, for road journeys and, later, for some classic events. It had survived its racing years well, remaining in largely original specification apart from a Plexiglass rear window, installed before Daytona, and side windows, put in before Sebring. It even has its original upholstery.

It’s still impressive on the road, light on its feet with a well-damped ride as the roar and snarl of the beat-heavy V6 reverberates through the lightweight structure, The steering has plenty of feel, and the balance from that superb weight distribution is evident in every corner.

‘The paint is very close to the original shade,’ says Toly. Originally it was a very light blue- grey metallic, then white with blue sills, then red, back to darker grey and now this shade again, The small hole in the floor behind the driver’s seat is there because, in the 40°C Oklahoma summer heat, the wood/tar sealing pieces would fall from under the dash; mechanics at the dealership simply threw them away, so water then leaked into the cockpit when it rained. ‘I always thought of sealing the empty spaces, but in the meantime I made a hole to drain the water. It works perfectly up to highway speed, then water comes in from the floor and makes my bottom wet,’ he smiles.

When Toly entered the Lancia in Bill Warner’s Amelia Island Concours in 2007, he won the Chairman’s Trophy for driving from Oklahoma to the show and back. It brought back memories of past racing days: ‘Those times are long gone,’ he says. ‘Today you can’t buy a Mazda Miata, keep it as it was built and go racing in Europe among the greats. Back then it was like buying a baseball glove and going playing with the New York Yankees.’

Yes, not only are the cars different but so, probably, is the spirit of the drivers.

THANKS TO Edoardo Bonanomi of Automobile Tricolore.

Clockwise from top left Arutunoff made the return drive from Oklahoma to Florida for 2007’s Amelia Island concours, thereby winning the Chairman’s Trophy; racing back in the day; Flaminia was a Sports Car Club of America stalwart; sticker from the 2000 Kitzbuhel Alpine Rally; current engine contains parts from the original – note beautiful cast fan; chasing an Ace in the 1960s; Flaminia Sport script sits proudly on patinated glovebox lid. Opposite and this page Forward-mounted headlights mark this as a 2.5-litre Flaminia Sport; typical double bubble Zagato roof was an option; tubular framework can be seen in the boot.