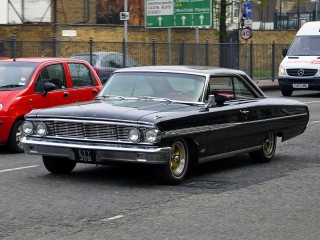 It’s hard to believe that this month (May) marks the 26th anniversary of my acquiring the Galaxie. It being a 1964 car means that I have been its custodian for more than half of its life. Bought from the original ‘little old lady’ in Redondo Beach, California for the princely sum of $850 - less than £500 - it arrived at Felixstowe on a sunny spring day in 1988. The first thing I did is what I always do - wound down all the windows to emphasise the coupe’s pillarless roofline.

From above: Ford was ideally suited to the Classic Car Boot Sale thanks to its vast trunk; young Balme inspects his purchase; NOS switch got Ford running again; acting as a wedding car caused a few stressful moments.

The second thing I did was to fit a set of American Racing Torq Thrust D alloys. The first quartet were 14in in diameter; the second, purchased 16 years ago, were 15in. It was quite a radical thing to do back then but, judging by last year’s Revival Car Show, it has become a default setting for owners of Ford Galaxies - particularly black ones. So ubiquitous are these aftermarket wheels that, in an attempt to stand out, I’ve decided to fit a set of original steel wheels and hubcaps - the latter bought at Hershey for $8 each. They are shod with the appropriate rubber, so I can now alternate between Madison and Bellflower Avenues depending on whether I want to be a Mad Man or a Kalifornia Kustomiser.

The big-block is still reliable and the car has had the good grace to suffer its few mechanical failures close to home. At my nearest BP garage (got to collect every one of those Nectar points with a thirst like the Galaxie’s) the starter motor failed, which meant that the car - being an automatic - was beached on the forecourt. As a result, I’ve taken to carrying a spare.

At the recent Classic Car Boot Sale, I utilised the ‘trunk’ to sell my wares alongside two friends, who both own Chevrolets. To my embarrassment, the Ford failed to start at the end of the day. Although the AA man who was on-site reckoned that it was the starter motor - I’d cunningly left the spare at home on that occasion to free up boot space -1 suspected otherwise. This was subsequently confirmed by the RAC man, who declared that the neutral-start safety switch had failed. To get me home, he bypassed the switch and later that night I was scanning eBay for a replacement. I had to resort to the online auction site because none of the repro-parts people produce one but, as luck would have it, a company in Indiana was auctioning a New Old Stock item, complete with 50-year-old box. Within two weeks it had arrived - after I had been held to ransom by Customs & Excise and the Royal Mail - and swapped with the defective switch located on the steering column.

A more awkward fix was the replacement of two core plugs. For a number of months, I had been concerned about puddles of anti-freeze appearing on the garage floor. My first thought was the water pump, which had been replaced just before the trip to the 2012 Le Mans Classic, and indeed one of the pipes needed tightening - yet still the puddles persisted. Being tucked behind the exhaust manifolds, the weeping plugs weren’t obvious and it was only after Colin Mullan followed the trail of rusty water on the block that we discovered the culprits.

Thankfully, I was totally unaware of the plugs’ imminent demise when I agreed to provide wedding transport for good friends Andy and Demelza. Had I known their true condition, my stress levels would have seen me lose my coolant in what had to be one of the most worrying journeys I’ve ever undertaken in London.

Having polished the car to within an inch of its life and attached the requisite white ribbon, I headed east allowing myself plenty of time. I got to Old Street roundabout within 20 minutes, but from there it took me a further 55 to get to the start of Kingsland Road - a distance of 800 yards. The needle in the temperature gauge had disappeared and yet all the time pedestrians walked past proclaiming how cool the car was. I finally doubled back, avoided a width restriction by going through a fire-engine lane - collecting a photo and a fine - and arrived one minute late with my heart racing. Sometimes ignorance, much like 26 years of automotive marriage, is bliss.