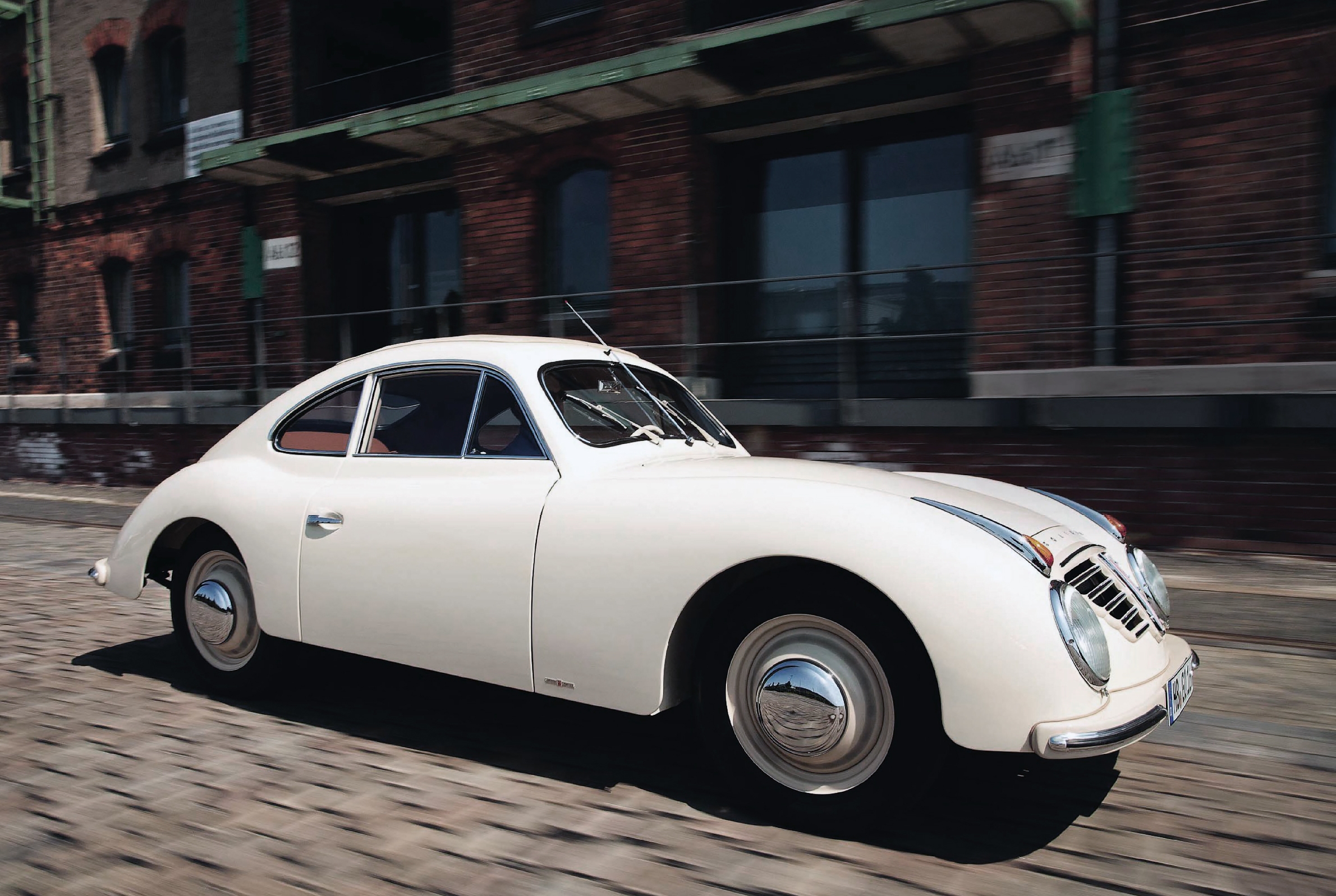 It’s a Porsche, right? Wrong – meet the stylish Goliath GP700 Sportcoupe. More exclusive than a Porsche, the Goliath tells a story of ambition and eccentricity. This car draws a crowd, there is no doubt of that. The swoopy, cream-coloured coupe certainly looks like a Porsche, and there are any number of ‘experts’ among the throng that inevitably gathers wherever it is parked who know to expect the intake slurp and the valve-gear chatter of an early 356. Turn the key and fire it up, however, and – oh! – it hums and putters away quietly as it moves off, triggering plenty of head-scratching among those previously confident pundits.

To be fair, the same level of confusion would probably have been caused when the first owner took delivery of chassis 480 014 in 1953. The identity of that person isn’t known, unfortunately, but we do know that he paid what was then a small fortune – DM9700, significantly more than its Stuttgart rival would have cost – to acquire one of these hand-built cars. It may not have secured a big brand name, but their money did buy them leather seats and the dulcet sounds of a Blaupunkt Type A51 EM wireless to enjoy while admiring the 6000rpm redline of the rev-counter on that handsome painted dash. 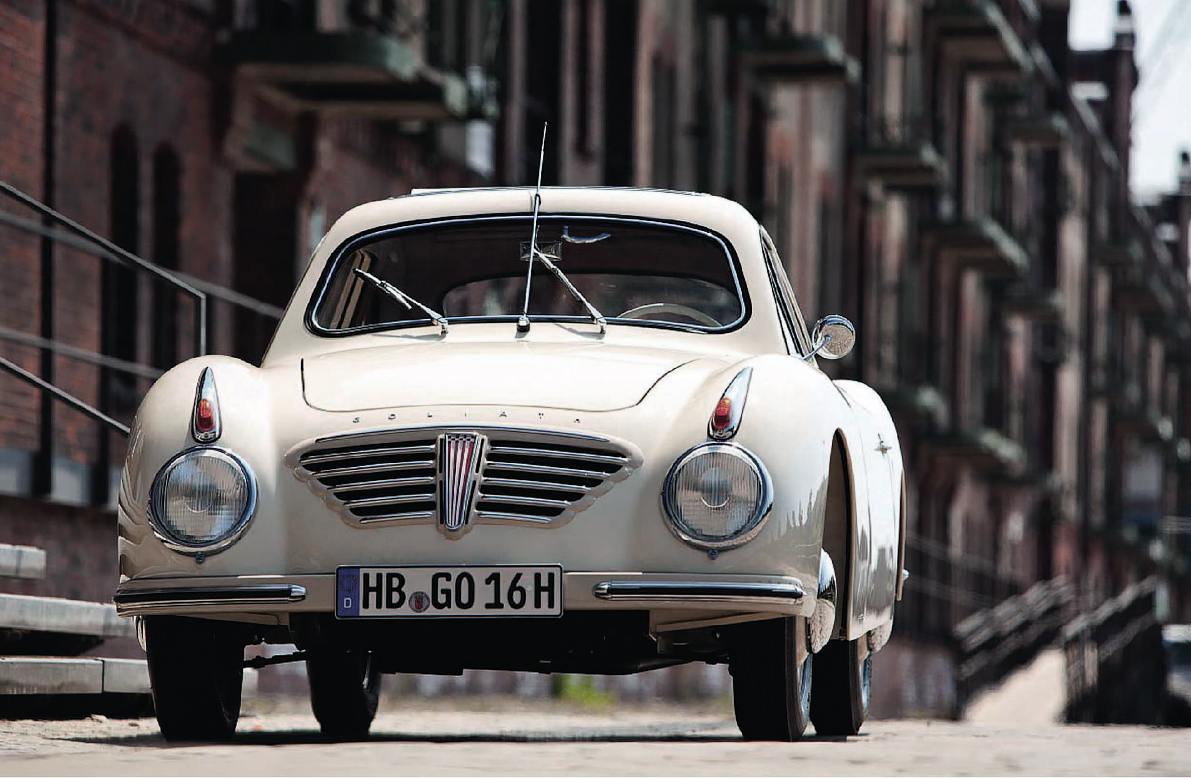 Not that they were able to enjoy the upper reaches of that powerband on summer days, though, when the heat would apparently cause bubbles to form in the fuel lines and subsequently upset the injection system.

Yes, you read that correctly: fuel injection, in a production car, in 1953. And not in a Mercedes-Benz 300SL, either, but the Goliath GP700 Sportcoupe – a 688cc, two-stroke, two-cylinder machine built in the small Borgward plant on the banks of the Weser, near Bremen. Carl Borgward had been using the Goliath name ever since he graduated from making components into building complete vehicles in the early 1920s, at first with three-wheeler vans then, from 1931, with the short-lived Goliath Pioneer, a tiny coupe powered by a rear-mounted 198cc ‘twin’. The name returned after WW2, once again beginning with commercials before moving on to passenger cars with the front-engined, front-drive GP700. And the most glamorous model was the pretty little coupe you see here, launched at the Berlin Auto Show in 1951 and bodied by Karosserie Rometsch – the Berlin-based firm best known for its Volkswagen specials, including the Beetle Taxi.

When it was hauled from a cowshed near Hamburg, the corroded and sad-looking Sportcoupe was finished in a lurid green, yet beneath that outer layer restorer Oliver Herbolzheimer uncovered a coat of red and the original Ivory. A Goliath sedan donated parts of the platform chassis as well as the new engine, and Herbolzheimer spent 1800 hours on the hand-finished bodywork alone. “Evenasnew cars, Goliaths were not symmetrical!’ he explains. “I usually find myself more interested in the complex jobs, but that’s not always a good thing for the client’s wallet!”

With Goliath spares understandably in short supply, the cream-spoked steering wheel was also sourced from the donor saloon, along with the red-and-white flag badge that adorns the Bremer grille, while a replacement for the missing tachometer was made using original parts within a reconstructed dial.

When it came to the engine, the injection system predictably gave Hans-Gunther Riedel the biggest initial concerns, but they were unfounded: “All that was needed was a really thorough strip-down, a good clean followed by careful reassembly, and it started first time!

We found that all of the pump settings and markings were still visible from when it was built and tested in the factory back in 1953.”

The Sportcoupe as found, after it had been cleaned up.

Part of the platform was supplied by a donor saloon.

The Sportcoupe might not sound like a Porsche on the move, but it’s more exclusive than an early 356 and tells a tale of German ambition and eccentricity. Yet, again, it’s a story that few will know, because this is the only one from a run of 25 cars (plus a further five built by Karosserie Rudi) that is able to move under its own power. Two others exist, but neither is in working order – mostly due to the cantankerous fuel-injection system. Although it was also an option fitted to some of the more common Borgward saloons and wagons in the early 1950s, almost all of them were later converted to carburettors after their frustrated owners’ patience ran out with the tricky, advanced set-up. 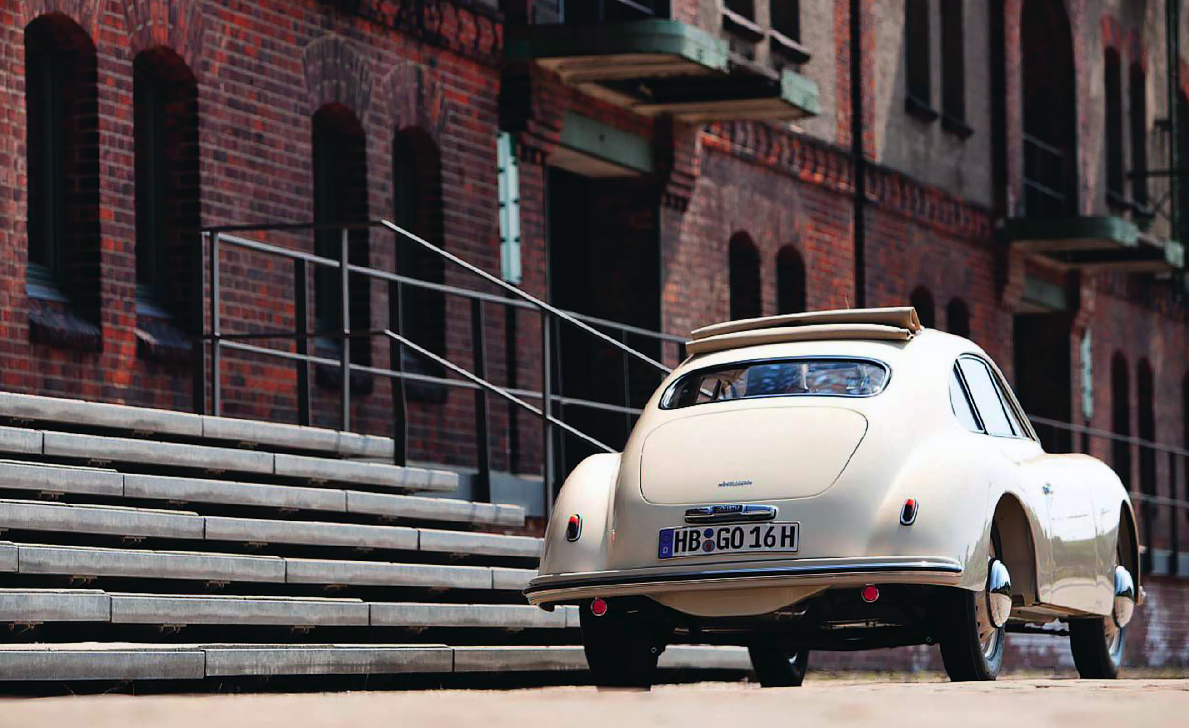 Heiko Seekamp, now 73, is old enough to remember those stories of Borgward’s small, stubborn, high-tech car. In addition, the photographer and classic-car collector grew up in Bremen, which explains his penchant for local machinery. “When I heard about this coupe, I wanted it immediately,” says Seekamp, “although I knew that the bill for restoration would have nothing to do with common sense.”

Fortunately, having developed several major photographic studios, he has been successful enough to indulge in such automotive follies.

For Seekamp to be able to buy and restore this particular car, however, first it had to survive. And for that, the collector has to thank a like- minded soul who acquired the rare Sportcoupe in the mid-’70s and squirrelled it away in the grounds of his castle. “I always wanted to restore the car myself,” explains the former owner, who would prefer to remain anonymous. “I knew it was something special.”

Those good intentions were never put into action, and the rare coupe was in storage for 40 years before an expert on Rometsch-bodied machines got wind of the car and freed it from the cowshed that had been its lair for all that time. Unfortunately, at some point the original fuel-injected engine had disappeared and the aluminium body was going to require some serious investment to put it right – something its new owner wasn’t totally prepared for… which is where Seekamp comes in.

“Whatever you think it’s going to cost, it will always be more,” says Oliver Herbolzheimer, a sheet-metal expert from Oldenburg who specialises in coachbuilt German classics. “The imperfections – and some, such as the way the roof was fitted to the body, were significant – are all part of the appeal with these cars. You can really see the work that went into to them and the issues that had to be overcome.” Rometsch reputedly spent around 1000 hours on each Goliath body, with the coupe built along the lines of the VW-Rometsch models: based on a standard floorpan, with a body framework constructed from folded sheet metal over which is stretched a sculpted aluminium skin.

Goliath was a small but creative brand: the Bremen firm produced fewer than 90,000 passenger cars between 1950 and ’61, yet almost every year brought changes and new niche models. The 700 first appeared in 1950 as a 25bhp (29bhp with injection) saloon or cabriolet, targeting the Volkswagen Beetle and DKW3-6. The coupe followed a year later and the Kombi station wagon in 1952, with the engine boosted to 886ccfrom 1956 after a little more than 36,000 cars had been built. That number had topped 44,000 by the time the firm made the switch to four-stroke flat-four power in 1957, marking the beginning of the end for Goliath. A year later the name died to make way for the Hansa tag, before both were buried along with Borgward as the firm collapsed in 1961.

The missing engine was more of a problem, however, because it wasn’t simply a case of repairing it. This proved a particular frustration to Hans-Gunther Riedel, the Frechen-based restorer who has become one of the country’s leading experts in the Goliath marque, having worked on some 13 of the remaining 50 examples known to survive. “It was a very hard decision to make, but in the end a good Borgward saloon had to die for the coupe to live,” admits Riedel, who restored the donated engine to almost museum levels of detail: even the original blue Rasche cylinder-head bolts have been cleaned up and retained.

The mixture of forward-thinking technology and relatively simple craft is typical of Goliath, the smallest brand in the Borgward group, which at most managed to produce 65 cars a day and where automation was a foreign word. The coupe oozes that character from every pore: it feels nothing like an early Porsche, but rather a true hand-built luxury automobile with its cream steering wheel, golden VDO instruments and wide, comfortable seats that don’t pinch your hips. Many other details are pointers to this being a long way from a mass-produced article – such as the glovebox cover that feels as if it would shrug off a nuclear strike and shuts with all the finality of a bank vault.

Above all, on the road the Goliath does not act like the weakling its meagre 32bhp output might suggest. Thread your legs under the large steering wheel, waken the 0.7-litre sports car and you marvel at the remarkable smoothness of the powerplant, which revs keenly and with almost no sense of internal mass. The gearshift is as slick as the chromed lever is elegant, the all-drum braking set-up is snappily reassuring and the benign nature of the front-wheel-drive handling feels every bit as far ahead of the times as it really was. And, with nearly 80mph available, the GP700 had plenty of pace to tackle the ever-improving highways of the 1950s.

With all of that in mind, it seems something of a shame that these days the Goliath’s longest journeys are made in the back of a covered truck. Such as in October last year, when the completed Sportcoupe was transported the 900km from Bremen to Munich to be awarded the ‘Golden Steering Wheel’ trophy for the best restoration of the year. But at least nobody there mistook it fora Porsche… 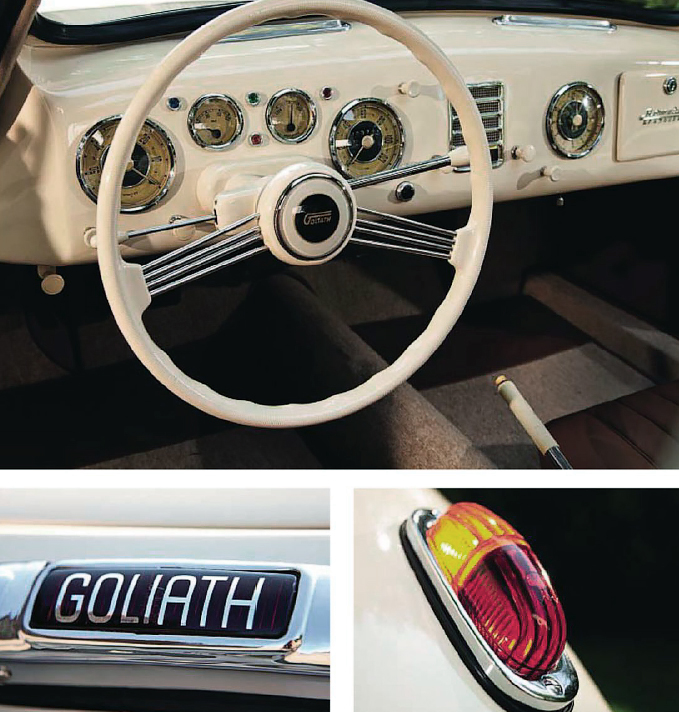 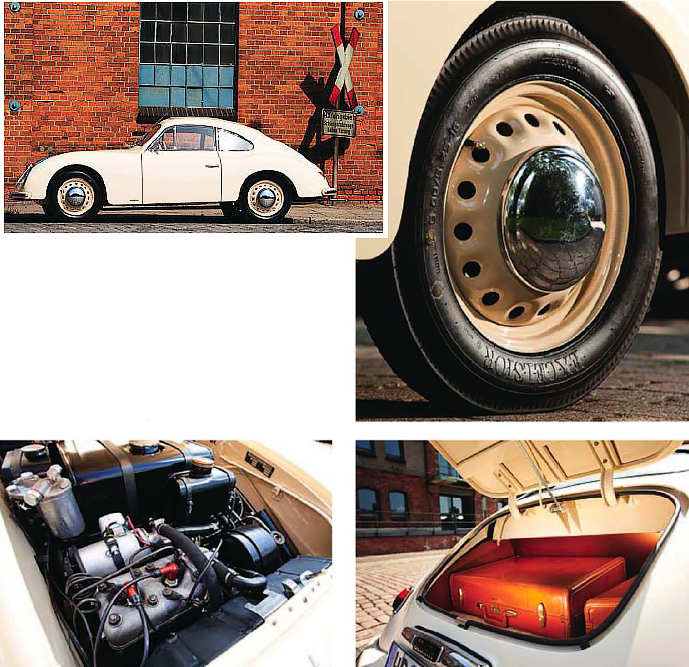 Despite their outward similarities, the Goliath and Porsche couldn’t be more different – one is a rear-engined, rear-drive, carb-fed flat-four, the other a front-engined, front-drive injected ‘twin’.