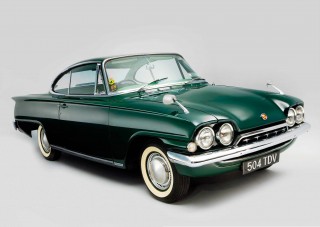 Set your phasers on stunning and take a look at the wacky styling of Ford's Consul Capri, says Kev Leaper.

Ford’s wacky 60s coupé is a retro hit these days. How to find a good one

It’s the Ford that time very nearly forgot and if wasn’t for the Dan Dare space-race looks it probably would have slipped from consciousness. Launched in 1961 the Consul Capri was right car, wrong time, wrong place. The UK might have been enjoying America's influence on the pop charts and youth culture but the car buying adults wanted something more... British. And that’s a shame. The model only lasted three years before Ford pulled the plug, which makes the Consul Capri, in Ford terms at least, rare.

'IT'S THE LAST OF THE THICK METAL FORDS'

It’s a car that often gets mixed up with other models partly because of the nomenclature and partly because the Consul Classic that  it was based on was also available as a two-door. It’s easy to spot the difference as the Consul Capri has an elegant roof line that swoops back, and from the side and has an element of E-type Jaguar, whereas the Consul Classic looks like they used the same tooling as the Ford Anglia 105E, with the rear screen being notched back. The original in-house name was Sunbird and that would help us now distinguish the car as the later Capris swamp the market, making finding one even more difficult. But they are worth the search. 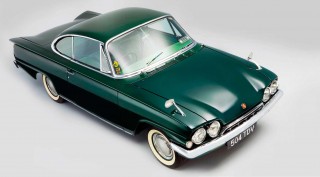 Mechanically there’s nothing to be scared of: Kent engined (called Kent because the chief designer Alan Worters lived in Kent) in 1300cc or 1500cc form, Mac strut front suspension and leaf sprung live axle at the back. Think Mk1 Cortina and you won’t be far out, so parts supply for mechanical bits is good. Body wise it’s not so good and like any car from this era they can, and do, rust. Big time. Ford called the body shell ‘The last of the thick metal cars’ in an effort to install confidence in the level of quality and to an extent that’s true, but rust proofing was called paint back then, and they used small tins.

Originally all Consul Capris came with a 1340cc Pre Crossflow Kent engine. It was basically a stroked Anglia 105E engine and not a ‘crowning glory’ moment with its three bearing crank crying enough whenever it was pushed. But the 1500cc five bearing Pre-Crossflow came to the rescue in August 1962 and is the one to have. It was a popular upgrade in the day (after the misery of premature crank failure of the 1340cc) and most cars you’ll find will have at least 1500cc capacity. The engine is a jewel if well built and maintained and there’s a plethora of tuning mods. There’s a rich heritage of 1500GT tuning including the likes of Keith Duckworth (the ‘worth in Cosworth) being involved and that’s been carried forward with some remarkably fast Mk 1 1500GT Cortinas proving the engine’s worth today. 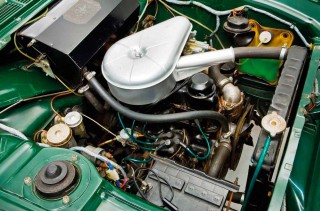 The shape of the Consul Capri has always flattered to deceive but plenty of owners have taken matters into their own hands and carried out engine transplants. We’ve seen everything from small block V8s (and some big block drag cars) to Zetecs sitting in the engine bay and really you have to take each on its on merits, but originality is generally the key to the higher prices asked for cars. The engine bay is wide so will accommodate a V8 but the steering box (similar to Cortina but not interchangeable) usually gets in the way. It would be worth having a word with Dave Colledge at Retroford about what subframe/ steering rack conversions, as he’s the man to see for Cortina kits.

The 1340cc cars came with a non-synchro first gear, four-speed ‘box lifted from the Angila 105E, whereas the 1500c had the all syncho, three selector rail, ‘box often called the ‘Bullet box’. With engine power from the Pre Crossflow not being excessive making the most from the gear ratios is important, so the ‘Bullet box’ is by far the most sought after. Burton Power have a big range of spares for these boxes so most problems are salvageable but finding a box to rebuild can be expensive, so budget in another £500 if the car you’re considering has the weaker 3-synchro unit.

Consul Capris came with either column or floor change so it’s a matter of taste but if you’re after performance floorchange is the way to go, it’s much quicker to snick between gears.

We probably should have started with the bodyshell because it’s both the reason you’d want one of these cars and the reason you wouldn’t. The shape is stunning and has lasted the test of time way better than many of it’s contemparies, but it’s ability to physically last the test of time is not so great. They could begin rusting if you ate a bag of salty chips near them, and with the early Sixties winters taking their toll on them they began to disintegrate like they were tele-porting Star trek style. Of course some owners rust protected them, but new cars tend to get bought by people who can afford them rather than people who love them.

'THE WIDE ENGINE BAY CAN ACCOMMODATE A V8 WITH EASE' 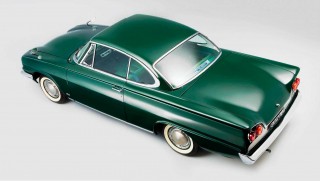 Finding a non-rusty one, or at least one that hasn’t been restored is going to be a big task, best accomplished with a big wad of cash. But finding one to repair isn’t so hard. But there’s a bit more bad news here. Panel supply is poor – read expensive. The Ford Consul Capri Owners Club helps a lot with smaller MoT repair panels and some larger panels (fccoc. org.uk) We found a single rear quarter for £1500 and they tend to rust in pairs.

Ex-Pressed steel panels do a decent range of repair panels along with a few full panels, for instance front wings are £800 from them. They also do floor panels for £300 and inner and outer sills for around £320. Not cheap until you consider how complex a lot of these panels are, and of course the numbers they’re made in.

But it can get worse than outer panels only. Water ingress from screen rubber leaks tend to finds their way down through the body to the chassis rails and Ford thoughtfully routed drain tubes from the rear quarter windows down through the sill voids, but these block up and the water ends up creeping through the panel seams encouraging rust as it goes.

But with prices of decent cars rising, partly due to rarity, they are becoming economically viable to restore and let’s face it they’re a lot more interesting on the eye than another MGB restoration.

Fancy yourself as a Private Dick? Probably not and that’s the big minus with having one of these, you’ll have to suffer a lot of polite conversation with strangers about the Saint, which is a shame because the P1800 is another car of the early Sixties that oozes style. It also oozes brown rusty water, probably more so than the Consul Capri, and should probably be on Greta Thunberg’s endangered list. Good idea to try one before they all disappear.

Okay the Karmann made 2000CS was a couple of years later (‘65’69) than the Capri and P1800 but it scored heavily on looks, albeit German style, rather than American. Arguably a better built car and not restrained by such a tight budget, there should be shedloads still knocking about but they had the Karmann bug of rusting in the showroom. They may make your bucket list, but check and check again for rust, otherwise a bucket might be the best way to collect one.

NICE BUT NOT CONCOURS Big range of prices here £10k-25k depending on mods and mutual matching of taste if paint and interior non standard.

Thanks to the fccoc.org.uk for help with this feature 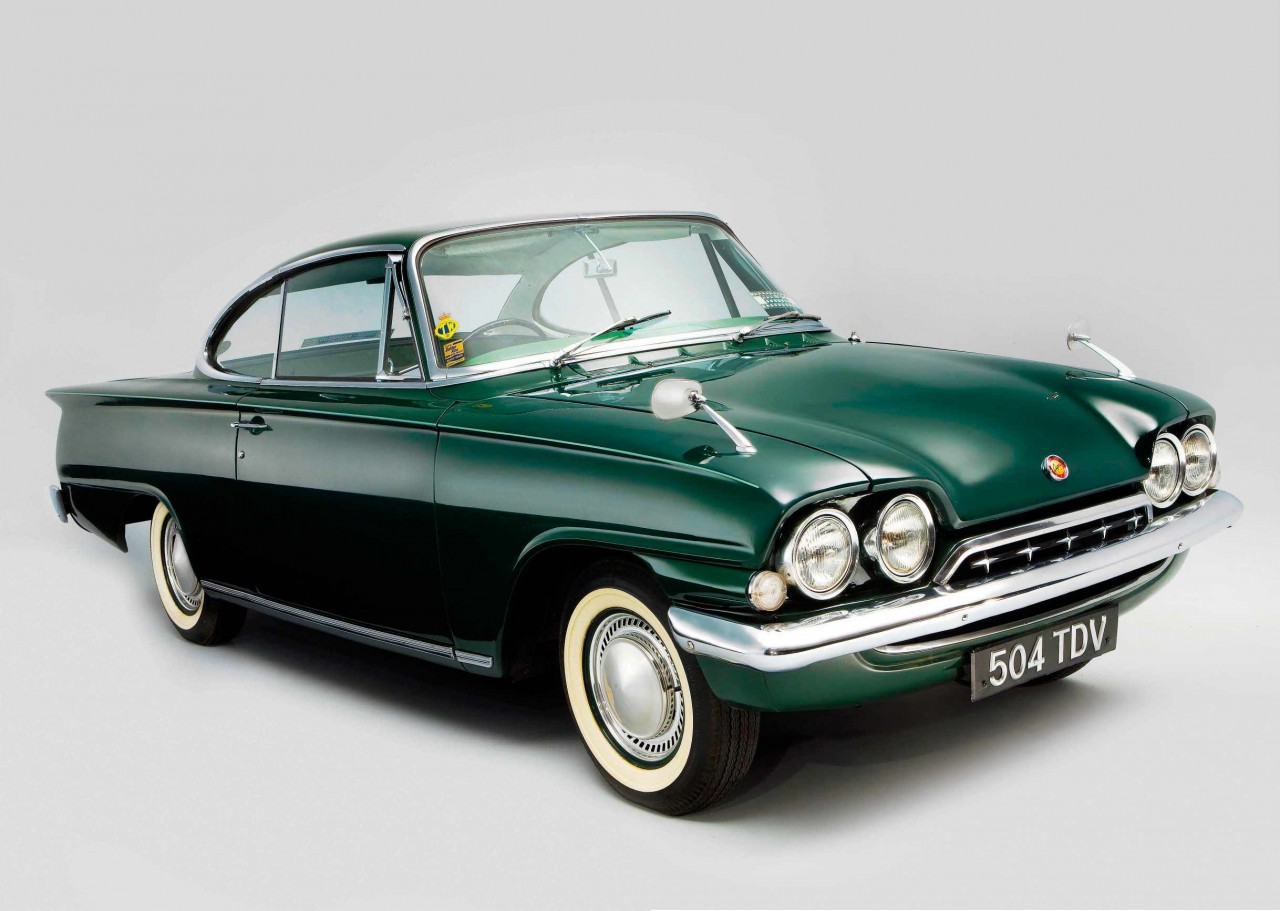 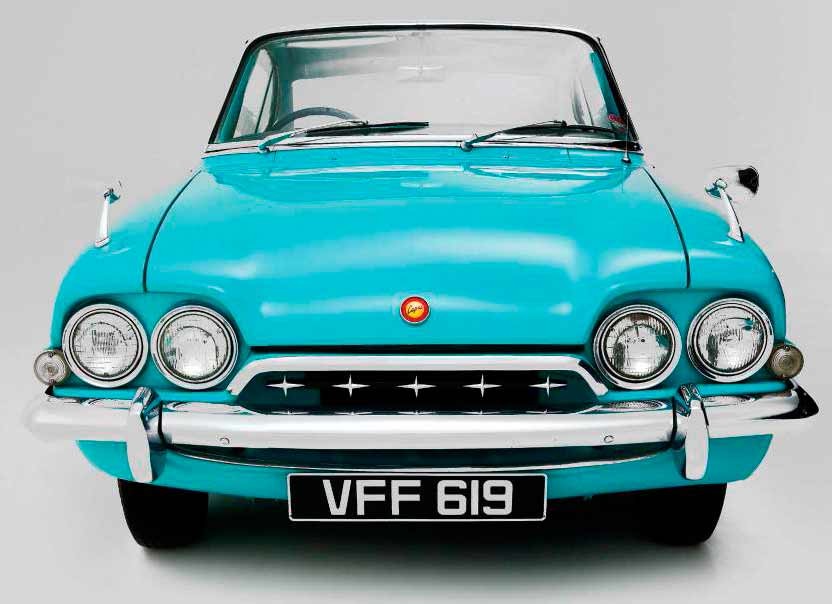 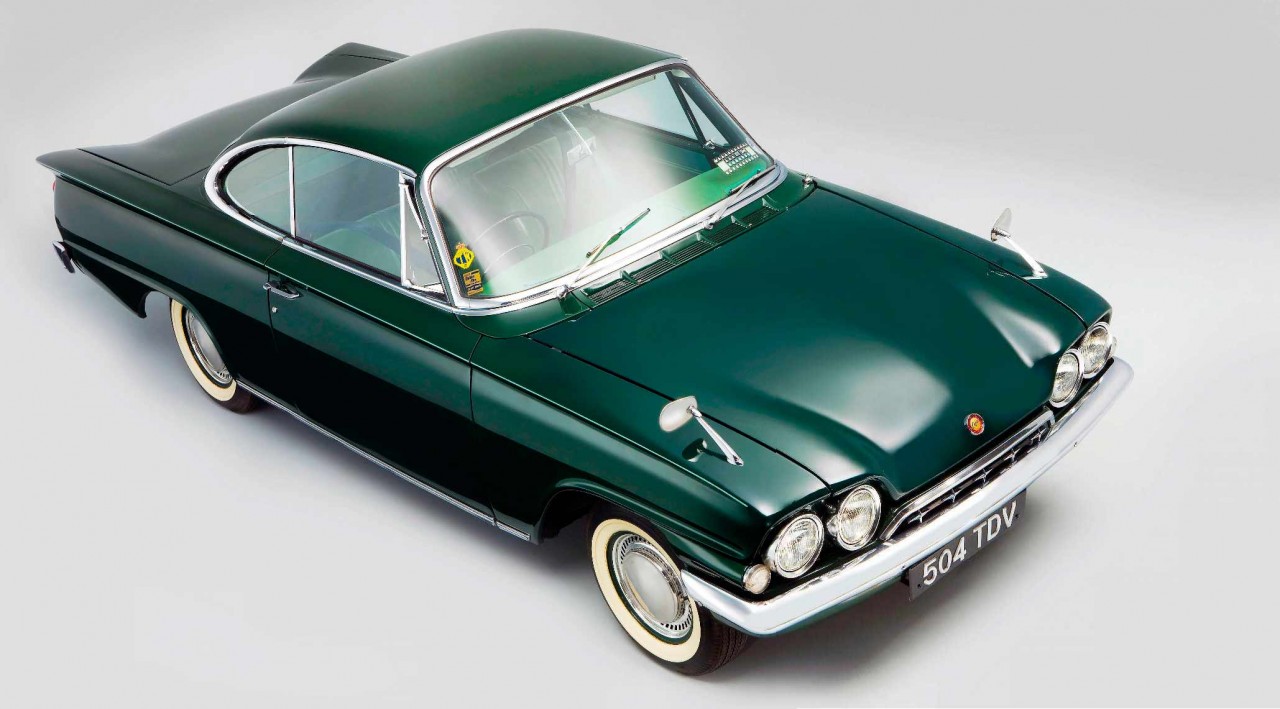 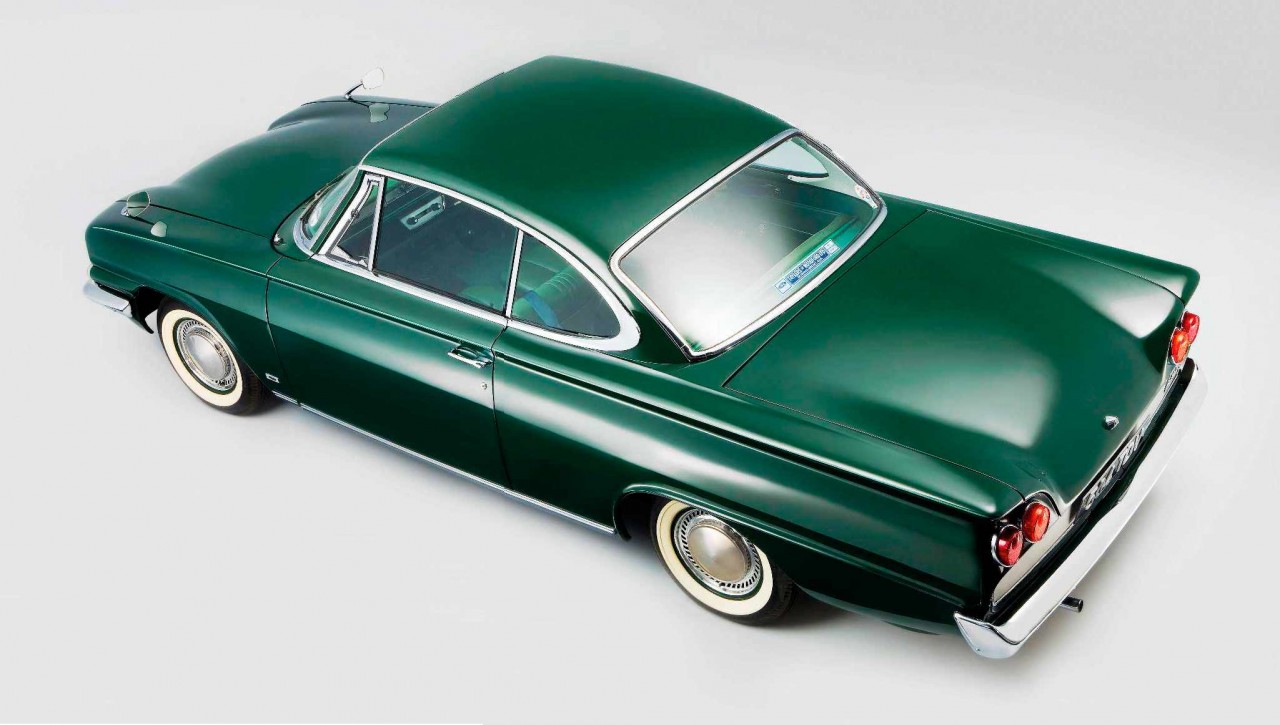 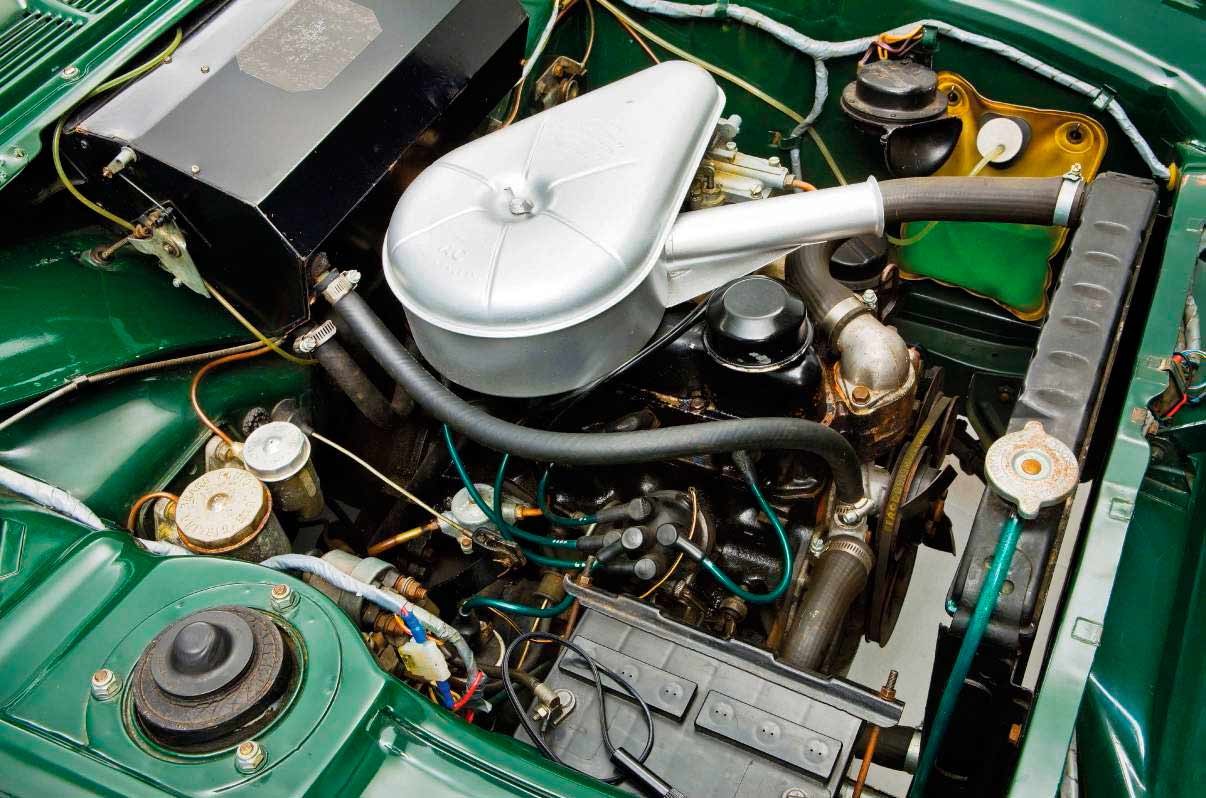 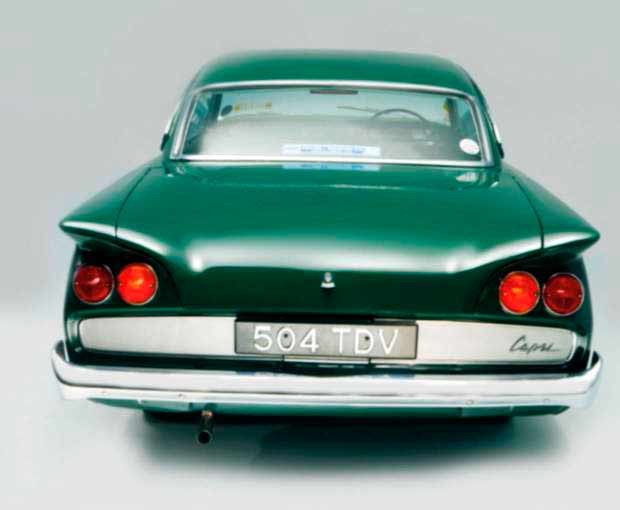 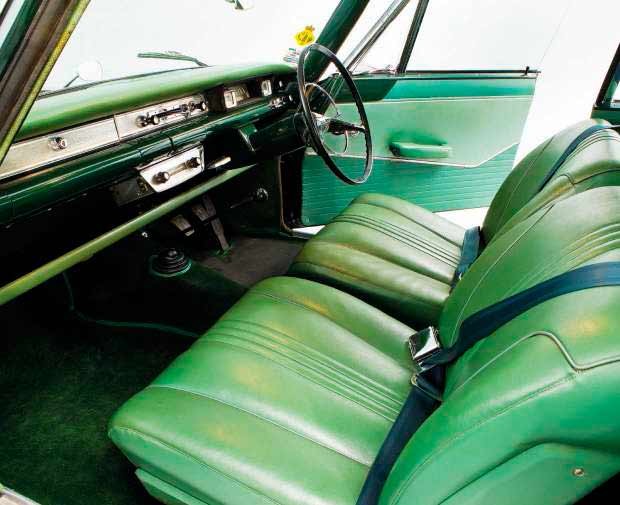 If only mass manufacturers were so brave today. Interiors are fabulous. 1500cc pre-Crossflow Kent engine. If the Kent's not to your taste... ...Small block Ford V8 ­ fits a treat.

Let’s face it the Consul Capri is all about looks and the looks came from the pen of Charles Thompson a Ford designer working in Dagenham under the design boss Colin Neale. You may think you know the name and you probably do as Charles worked as a designer at Ford for nearly 40 years and among the highlights like the Consul Capri he worked on everything from Cortina Mk1s (he was responsible for those funky peace symbol tail lights) to the futuristic Zodiacs.