Citroen CX GTi Turbo is due a comeback 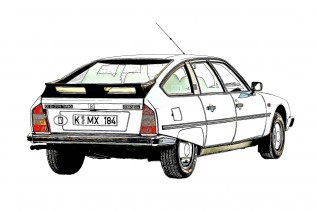 As Citroën looks to evoke its big saloons of old, it’s time to buy the glorious CX GTI Turbo, non? The hoarder Keith Adams ‘As a mile-eater that turns heads, it’s hard to beat’

I’m a big Citroën lover, so spending an hour or so at the Geneva motor show chewing the fat with the company’s CEO Linda Jackson was very enlightening. She’s a Brit who’s been running this most French of companies since 2014, and refreshingly, she’s made it acceptable for this formerly iconoclastic company to get in touch with its heritage after years of denying it ever had one.

The latest manifestation of this thinking was the launch of a new corporate video. Called ‘inspired by you’, it sees a hipster-looking chap hitch a lift in a number of classic Citroëns – 2CV, H-vanet al – before fast forwarding to the future and being subjected to a sneek peek of the next-generation C5 in the form of the recent CXperience concept car.

This is no accident. And this is no mere motor show flight of fancy. Jackson said that she wants Citroën to reinvent the large saloon with its next C5 – a car that will have a daring cigar-shaped profile, and will be dripping with desirable new technology. All good stuff, and a reminder that the radical- looking next-generation C5 is going to owe rather a lot to the 1970s and ‘80s CX.

So, it finally looks that after years of existing in the shadow of the DS, the CX is going to emerge as the French industry’s next all-time icon to be celebrated. Being Modern Classics, the absolute vision of CX loveliness for us is the post-1984 GTI Turbo, which at launch was celebrated as the company’s fastest-ever production car, and still cuts it now. Top speed was 135mph, and 0-60 mph was less than eight seconds.

Although it appeared almost ten years to The day after the launch of the original CX, the GTI Turbo looked up-to-the minute, and dripped with the menacing road presence that any car designed to go Audi-baiting should have. Unlike most performance cars of its day, the CX GTI Turbo had beautifully- soft seats, super-powerful brakes, a long- legged, supple ride and body-roll aplenty.

Today, this is the CX every one wants – because it’s the only version that has the performance to back up its dramatic looks. It’s also still realistically-priced, kept low by the ever-present spectre of huge restoration costs, a poor parts supply, and a lingering fear that the CX GTI Turbo is too complicated for mere mortal mechanics to fix. For £8000 you’ll get just about The best example known to man, while £1000 will buy you a drivable project.

The reality is that there’s bags of specialist knowledge about that suspension out there, and it’s easily fixed, while the powerful turbo’d engine and simple running gear has its roots in the pre-war era (seriously), and isn’t difficult to put right. However, you need to make sure it’s not rusty underneath, and that the interior is complete and in good condition. Replacement panels and interior trim are now priced on the ‘unobtanium’ scale.

To drive, they’re more 1990s than 1970s, with strong brakes, super-responsive steering and keen handling – once you’ve dialled-in to the turn-in body roll. Power delivery and performance feel pretty modern, too, with bags of mid-range grunt, and effortless motorway cruising. The GTI Turbo badge is a bit misleading, but as a capable mile-eater that turns heads (including your own when you get out and walk away), these cars are hard to beat.

Given that the CX is about to undergo something of a renaissance at the hands of its maker, don’t expect them to be this cheap for much longer– and I’m not just saying that because I have one. Trust me!

Keith STREET Adams has not set their biography yet