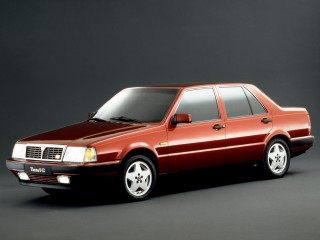 The answer to a question nobody asked? We’re not sure the world ever needed a 2.9-litre Ferrari V8-powered Lancia Thema, but it’s a more interesting place for having such a machine. The first step in understanding the 8.32 – eight cylinders and 32 valves – is to get any ideas of rivalling a BMW M5 out of your head. Style, comfort and effortless pace are the name of the game here.

With 215bhp and 210lb ft, it can certainly do the business when required. Although sharing its alloy block and cylinder heads with the 308, the engine was suitably modified for smoothness and refinement for Lancia by Ferrari. The most significant change was the switch from flat-plane crank to a cross-plane item. Power dropped, but torque was up and was delivered much lower down the rev range.

It’s as smooth as an engine can be, but when you venture above the 4500rpm it will magnificently sing all the way to 7500rpm. While the thoroughbred under the bonnet is certainly a huge part of the 8.32’s appeal, there’s a lot more to love. Lancia had adopted a reputation for high-performance rally machines with the Fulvia, Stratos, 037 and subsequent Delta Integrale, but the 8.32 took Lancia back to traditional territory: a purveyor of luxury.

The regular Thema’s decidedly average cabin received a makeover. The aim was to lift the ambience, adding a leather and alcantara- clad walnut dashboard – complete with an array of extra gauges – along with seductively trimmed Poltrona Frau seats. One look at the result, and it’s easy to understand why the 8.32 was the chariot of choice for Enzo during his final years.

Dynamically, it’s exactly what you would expect of a powerful front-wheel-drive executive saloon from the ’80s. When pushed, understeer and a fair amount of wheelspin. The speed-sensitive ZF Servotronic power steering could do with a little more feedback, but the gearchange is a delight. While Lancia should be admired for being an early adopter of electronically controlled dampers, they were too harsh at low speeds and lacking in control when pressing on. An electronically extendable rear wing (activated by a dash-mounted switch) supposedly improved high-speed stability.

Visually, you could say it lacks drama, but the straight-laced look adds to the appeal. Ferrari-style wheels and yellow 8.32 badges hint at the potency, but this car is as under-the-radar as they come. Many owners have added Ferrari badging, but from the factory the only mention of the connection was under the bonnet.

It was a classic the day that Lancia signed it off, and the joy of having a Ferrari engine in an understated Italian saloon is still a unique proposition. In a world governed by common sense, the Thema 8.32 simply shouldn’t exist. We’re thankful it does.

Lancia sold a total of 2370 Series 1 cars between 1986 and 1988, and 1601 Series 2 up to 1992 worldwide. All cars were left-hand drive, limiting its appeal in the UK when new. Although a handful found UK buyers originally, quite a few have been imported in the intervening years. Prices today start from around £8000, for which you can expect a car needing some work or with high mileage.

Increase your budget to around £13,000 for a car with good history and reasonable miles. As always, it’s the very best examples with low mileages that attract collectors and more serious price tags. Expect a dealer to be asking in excess of £20,000 for such a car.

Worried about that engine? Rebuilds can be expensive – it is a Ferrari engine after all – but, just as in the 308, it’s a reliable unit if looked after. Regular specialist maintenance is the key, which has not always been the case when values were at their lowest. Early cars feature Ferrari-built engines, while a batch of later S2s were assembled by Ducati.

A lot of parts were shared with the regular Thema, but any components unique to the 8.32 can be difficult or expensive to replace. Evidence of a freshly rebuilt water pump is desirable, as it’s different from the one used in the 308. Rough running could be down to the Magneti Marelli ignition needing attention.

If you think that Lancia means rust, then you’re in for a pleasant surprise. The Thema was galvanised from new and, unless it has been used throughout winter on salted roads (which is unlikely), serious corrosion is rare.

The wonderful feeling I get from this car is the sense of uniqueness. Aware of the pedigree it has, there’s an absolute sense of style derived from such understatement in appearance (even more so in the latest version of the series ll with not even that lovely yellow badge on the boot or on the sides). Relates somehow to the brown paper bag - caviar inside - theory.

Driving pleasure is definitely high and the fact it’s a front-wheel drive is not as noticeable as one may imagine. I love pushing this beast but won’t go where it doesn’t belong i.e. high speed tight cornering.

The sound of the exhaust is music, although it could have been more sonorous inside the cabin. So windows open, whichever the season.

Costs? Well, even though this 8.32 was very well kept and serviced, there were more costs than hoped for. As the car was still for 10 years, I had to do a part engine rebuild which doubled the initial cost of the car. I also had to solve the problem apparently 308’s also tended to have when restarting the engine after 15 minutes: petrol vapour hovering in the engine bay and drowing it. That resulted in trying intensively at least 15 or 20 times before getting the engine running combined with the risk of running out of battery. Now it’s sorted and starts like it should. Fortunately it’s not a big issue to eliminate this problem.

Inside, the wooden and leather panels tend to squeak in a bend or on a bumpy road. I think the plastic clips holding the panels, after 25 years, are a bit tired. But the sense of luxury is present in every detail and is just glorious.

So, which fabulously exotic collector providing such uniqueness, within a 25-30k budget (extra costs included but now close to concours condition) wouldn’t have some issues? Accepting its imperfections is part of the bond I created with the 8.32. And it’s certainly worth it because what a Lancia Thema 8.32 has to give in return is - put simply - huge.

Marc Menhams
There are no comments posted here yet
Close