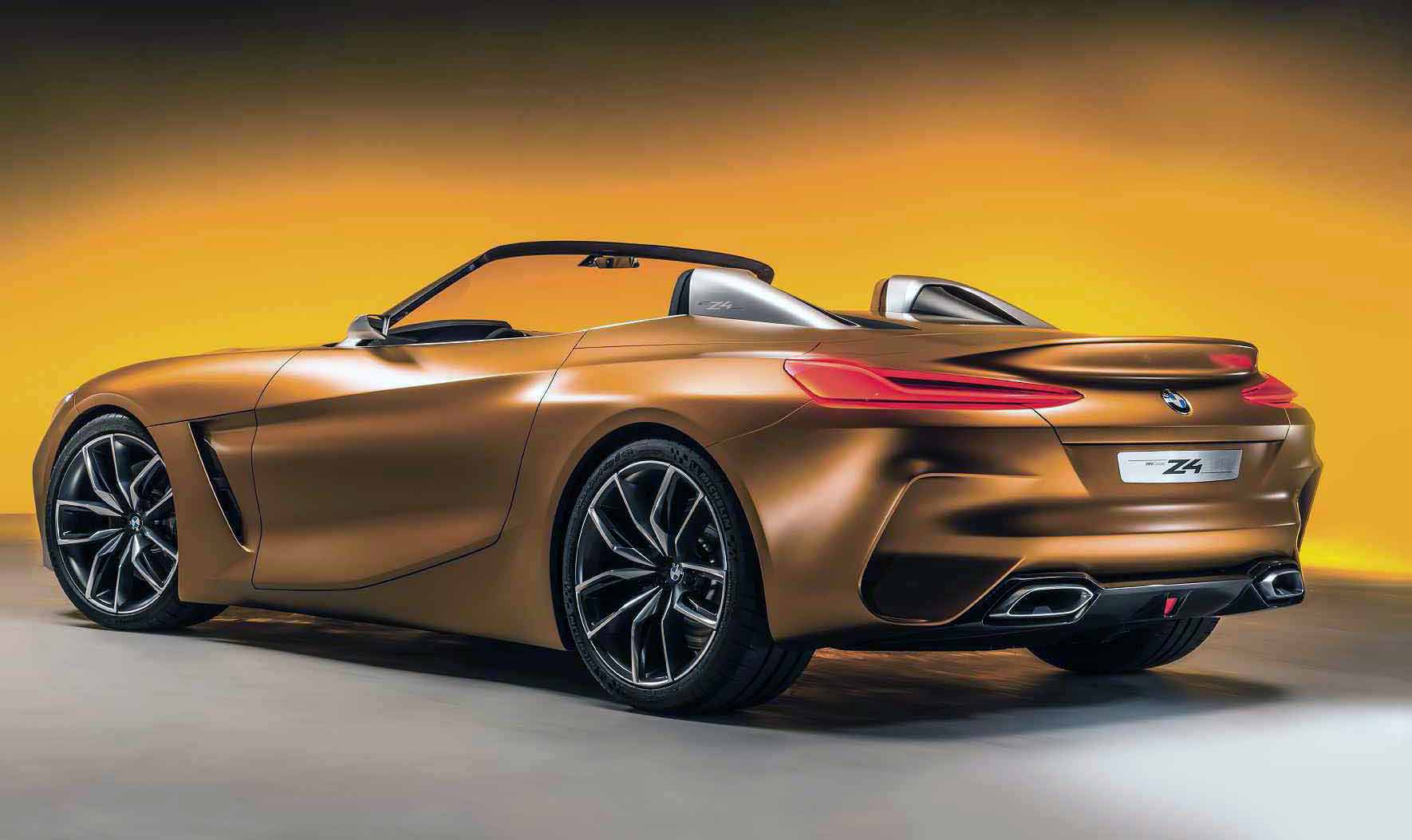 Concept Z4 shows wilder side. Could this finally be the sports car that BMW always promised us? We take a close look at the thrillingly bold Concept Z4. Text by Bob Harper. Photography by Antony Fraser.

We wanted to make the car very agile, to design a car that was The Ultimate Driving Machine, with true BMW genetics – an ultimate, no-compromise, almost extroverted design.’ BMW’s head of concept design, Marc Girard, is talking us through the thinking behind the Concept Z4. Sitting under the lights of a studio on the outskirts of Munich, it certainly appears compact and aggressive. It also closely reflects how the production version will look when it makes its debut next year. What we have here is, according to Girard, 80 per cent of the eventual production car. It’s also the first fruit of BMW’s collaboration with Toyota, the Japanese firm using this platform to relaunch the Supra.

The Z4 is a model that’s often suffered with an identity problem – the original was touted as a Boxster-baiter but didn’t quite pull it off, while the outgoing version was a far softer machine that cited the Mercedes-Benz SLK and Audi TT as its main rivals. So will we see a real drivers’ Z4 with the next generation (internal code number G29) when it eventually hits the streets? ‘What we wanted to convey with the car’s proportions is performance,’ continues Girard. ‘It’s a drivers’ car, a sports car; it’s super-agile, it’s light, it’s light-footed – and extremely dynamic.’ While he might be talking primarily about the way the Concept Z4 looks, Girard has an infectious enthusiasm that makes you believe this will be translated into dynamic ability, too.

With two BMW concepts seeing the light of day in such rapid succession – the other being the Concept 8-series – it should come as no surprise that there are similarities, but the 8-series’ luxury GT focus and the Z4’s sportier dynamic means they’re very different in style, even if their combined look does give us a strong indication as to the direction BMW styling will be taking. With the Z4, Girard has taken inspiration from previous BMW design icons and reinterpreted them. ‘We definitely want to reinvent everything,’ he says. ‘We’re not doing retro though, we always reinterpret key cues, such as the kidney grilles.’

And that’s certainly true of the Z4’s grilles, for not only are they significantly wider than we’ve become used to, but they’re also missing the traditional slats, replaced with a mesh design that really accentuates the reinterpretation of the classic ‘shark-nosed’ styling of BMW icons from the ’70s and ’80s. The width of the grilles means the headlights have been pushed further to the extremities and are now staggered, one above the other, for a unique, BMW-esque look. ‘The icons are still there – the kidneys and the grilles, those boxes are ticked – but newly translated, keeping them alive, keeping the thread, but reinterpreting them,’ observes Girard. ‘It’s a very tight exercise because you could lose the thread if you go too far.’

The bonnet is a wide clamshell, with two simple but effective strakes on either side to aid cooling. Where its extremities meet the car’s flanks, it starts a strong swage-line that rises up the car as it travels from front to rear before meeting the delicate (but still recognisably BMW) LED rear light clusters. Along the Z4’s flanks, scalloped lines rise up from the large vent aft of the front wheels, enhancing the car’s stance and giving the Z4 some muscle. The car sits on 20-inch alloys, another reinterpretation, this time of the classic BMW twin-spoke design. At the rear, there’s a neat ducktail spoiler integrated into the bootlid, while dramatic ducts and a carbon rear diffuser complete the look.

A major talking point are the aluminium and carbon fairings behind the headrests, incorporating rollover protection, but Girard won’t be drawn on whether they’ll feature on the production version. We hope they do but, given the Concept doesn’t feature a working hood, there’s a strong chance that they’ll be dropped for the production car. What we do know is that the new Z4 will have a fabric roof, which it’s said will help it come in 150kg lighter than the old Z4 (which weighed around 1500kg in 35i M Sport form) with obvious dynamic benefits. With the doors open, you can see high and wide sills that should ensure excellent structural integrity, while in profile you can see a shortened wheelbase, which puts the driver in the centre of the car rather than towards the rear, as has been the case with previous Z4s.

Inside, the concept’s Energetic Orange Matt paintwork is echoed on the passenger side, while the driver’s immediate environment is trimmed in black, adding to the air of purpose. As with the Concept 8-series, the minor controls have been pared back slightly and are grouped in ‘islands’, so those devoted to the driving dynamics are all sited around the gearlever, the heating controls around the vents and so on. The dash-pod and iDrive monitor now blend into each other in a clear indication of how future BMW dash design will look, with a flow of information running from one to the other. Within the dash-pod, the instrumentation will no longer feature traditional round dials, moving to a look more akin to the car’s LED headlights.

While it’s too early to say exactly what to expect in terms of the drivetrain, it doesn’t take a huge leap to suggest that we’re likely to see four- and six-cylinder engines from BMW’s latest modular range. So expect turbocharged four-pots in the 20i and 30i, plus a 40i model as the range-topper powered by the familiar turbocharged 3-litre straight-six. We wouldn’t bet against a hybrid 40e model, either. Will there be a headlining M model, though? It’s a mouthwatering prospect, as the twin-turbo six from the M3 and M4 would definitely fit under the new Z4’s somewhat truncated bonnet, but there wasn’t an M version of the outgoing Z4, and, even with the original Z4, the M model was a late addition to the line-up that wasn’t originally in BMW’s product planning.

Perhaps more likely is an M Performance Z4 using a blend of M240i running gear, and that has the potential to be a tantalisingly good evostyle machine. If Girard’s promise of agility and dynamism translate to the driving experience as well as the design, we could be in for a real treat.

Below: rear is still recognisably BMW, but sculpted tail suggests a much more daring look for new Z4. Right: some typical concept-car touches, but new dash does contain clues to next-gen BMWs.

‘Will there be a headlining M model? It’s a mouth-watering prospect…’