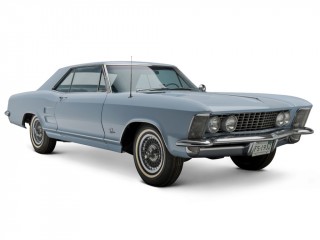 Few American classics can match the original Buick Rivieras mix of effortless style and luxury But the Riviera has always remained a less obvious choice, despite the impact it made when it was launched. It s not that the Riviera has ever been forgotten, especially in the USA, but it simply never enjoyed mainstream popularity like many of its rivals here in the UK. Adored by more enlightened enthusiasts (Drive-My's deputy editor ran a 1963 Riviera during the early 1990s), the Riviera can be a stunning purchase today.

During the late 1950s, Ford defined this rapidly growing ‘personal luxury car' class with the Thunderbird. It was a surprising success, and General Motors wanted a piece of the action. It started work on its very own upmarket coupe, the Bill Mitchell- designed XP-715 ‘LaSalle II’ concept eventually leading to the Buick Riviera of October 1962.

When launched, the Riviera was powered by Buick’s 325bhp, 6.6-litre ‘Nailhead’ V8 which was shortly joined by an optional 7.0-litre unit. Standard equipment included potent power assistance for the steering and the all-drum brakes, and, even with two- speed Dynaflow automatic transmission, it would cover 0-60mph in 8sec and go on to about 120mph.

Based on underpinnings similar to those of the rest of the Buick range, the cruciform chassis was slightly shortened and narrowed and sat under an all-new, unique bodyshell. The all-coil suspension used double wishbones up front and a live axle at the rear, located by trailing arms. It was set up, however, to be lower and (relatively) firmer than any previous Buick.

The smaller’ body (still 17ft 5in long) helped make the Riviera considerably lighter than other Buicks, so it was surprisingly quick in standard form. It would get somewhat quicker in 1964 with the launch of the Super Wildcat version, whose 7.0-litre engine gained a second carburettor and a power hike to 360bhp.

A facelift in 1965 brought concealed headlamps and the removal of some superfluous vents, smartening up what was already a very classy piece of styling. Some actually prefer the look of this slightly refined version. The new Gran Sport version was also introduced which featured the 360bhp engine, more aggressive gearing and uprated suspension. All models also received an updated three-speed GM Turbo Hydra-Matic transmission. These ultimate versions of the classic Riviera shape weren’t made for long, however; after 112,244 Rivieras had rolled off the line, the time had come for the second generation.

It arrived in 1966, with a slightly bigger body and an altogether different appeal. It went through various different styles, and despite a radical, and to some eyes interesting, ‘Boat-tail’ re-style for the third generation in 1971, later Rivieras never quite grabbed the public’s imagination as the original had done. The design magic of GM’s Bill Mitchell era had gone.

Early Rivieras have always had a following. Values have remained similar to those of the Thunderbird, but the Riviera has a load more cult appeal. For the money, there’s very little out there that can compete with a Riviera on visual drama. Find a good one today, preferably a 7.0-litre, and enjoy.

An early Riviera in complete, running condition can start from around $10,000 in the USA, but anything you look at below about $20,000 is likely to need a lot of work. Values haven’t moved a huge amount in the last three years, which means an extremely good car can be found for around $35,000. Dealers are likely to charge around $50,000 for a concours car with the 7.0-litre engine.

Finding any car in the UK is more of a challenge, but there are a few here. Just be sure it has been maintained correctly and is well rustproofed.

If you’re importing a car from the USA, make sure it’s bodily sound, as rebuilding the floorpans and structural crossmembers is a huge undertaking. Finding parts is also surprisingly difficult, so a car in complete and sound condition will make life easier. The clubs can help here.

On the test drive, bear in mind that these cars always had a firmer, sportier ride than other Buicks. It should feel well tied down by 1960s US standards.

If it’s loose, floaty and prone to wandering, it probably needs a suspension overhaul.

The revolution will not be televised…