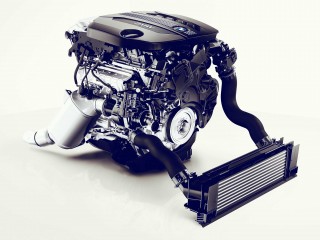 The N47 has now been in production for 11 years, and I include the B47 from 2015 in with this unit as, really, it’s much about the same. If, however, you’re in need of a used engine to replace yours, you need to be aware that the N47 D20A and D20C do not interchange.

So, what are the differences? Well, the cylinder head is the main one as it has different mounting provisions for the EGR cooler, while the block differs in much the same way. You could, in theory, get it to fi t but it would never be very good and, if spending upwards of £1,000 on a used engine, you really want the right one. It’s not like when we used to put a two-litre Pinto engine in a Mark 2 Escort, making it fi t by bashing the tunnel and sump with a Thor mallet, then making up a few brackets! The D20A was the first one and it was fitted to the 118d and 120d, the E90 318d and 320d as well as the E60 520d.

The D20C, however, was redesigned to meet Euro 3 emissions regulations and, in fact, made its debut late in 2009, to be fitted in certain cars such as the E90 320d Efficient Dynamics, plus some 1 Series cars as well as the E84 X1 from 2009, before being fitted to the F10 520d. If you’re repairing an engine after a chain break, then you may find all you need is a cam carrier and a couple of cams if the chain trauma happened at a low engine speed.

The piston hits a valve and breaks a rocker or two, fractures the cam carrier and can twist the lobes around on the cam. Mind you, the N47 and N47N (basically the N20C) are nice engines to work on. They’re quite easy to remove (turbos are very easy to replace) and, once on the floor, the head and rear timing cover can be removed in no time. Chain apart, it’s a better unit all round than the old M47.