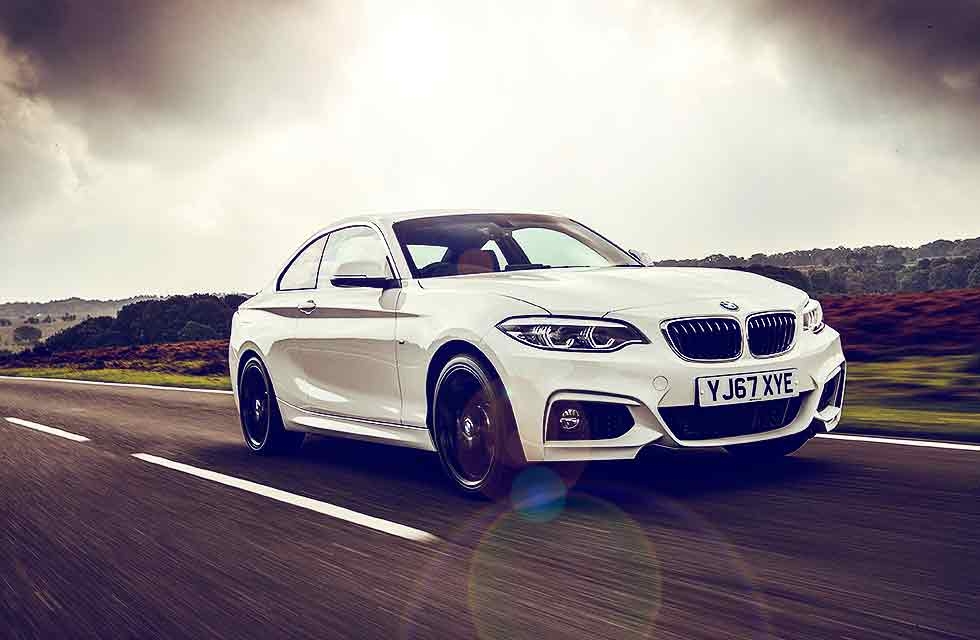 2 Series Review. The 2 Series Coupés and Convertibles offer useful performance and entertaining handling, but which one should you choose? Bob Harper is our guide to the current range.

The 2 Series Coupés and Convertibles offer useful performance and entertaining handling, but which should you choose?

If you’re after a small, entertaining sports coupé that’s not going to break the bank, you’re not really all that spoilt for choice. Some manufacturers offer two seats, a few offer a 2+2 seating arrangement, but a full four-seat example is a pretty rare thing indeed. And if four seats are important and you also fancy a bit of rear-wheel drive entertainment, then your choice is extremely limited.

Fortunately, BMW has just the answer with its range of 2 Series models and, with pretty much everything – from mild to wild – in the model line-up, there should be something to suit all budgets and driving styles.

We shouldn’t forget that the 2 Series is also available as a four-seat convertible and, while it seems that there are more cabriolets on the market these days than there are sports coupés, BMW is once again just about the only manufacturer offering rear-wheel-drive combined with rear seat accommodation suitable for anyone larger than a Hobbit!

The 2 Series Coupé made its debut in 2014, and was followed by the convertible early in 2015. Then both model ranges were given a mild facelift and makeover in 2017. In line with most BMW ‘LCI’ updates these days, the changes on the surface appeared quite minor, and included reshaped bumpers, some minor tweaking of the spec levels and the debut of LED head and tail lights on all models.

Inside, there were more changes including a new instrument panel, revised centre console and, on M Sport models, a black optic display in the instrument cluster. As with all models in the BMW line-up, navigation is standard, but it’s only if you spec the Professional Navigation system – with its larger, 8.8in screen – that you get the tiled, touch screen set-up.

But what’s the 2 Series like to drive? Perhaps the range’s trump card is its size, and, while it’s grown over and above the 1 Series Coupé that preceded it, the 2 Series is still relatively diminutive. This is especially so when it’s compared to the 3 Series, which has grown significantly over its lifetime.

Having said that, it’s interesting to note the 2 Series is a chunk-of-change bigger than an E30 3 Series – around 125mm longer, 130mm wider and 20mm taller, and sits on a wheelbase that’s 120mm longer. By way of contrast, the 2 Series is still nigh-on 200mm shorter and 50mm narrower than the current 3 Series.

The advantage of the Two’s relatively small footprint is that it feels considerably more lithe than a 3 Series, responding faster to inputs than its bigger brother, and feeling a good deal more wieldy when tackling smaller A- and B-roads. What’s more, with less weight to drag around than a 3 Series, the Two is a peppier performer, as well. So, if you don’t need the extra space, then you really should consider a 2 Series.

The range starts with the 218i, which is powered by the turbocharged, three-cylinder 1.5-litre unit that’s good for 136hp and 162lb ft of torque, endowing it with an 8.8-second 0-62mph time, and a top speed of 130mph. Couple those performance stats with a combined economy figure of 52.3mpg plus emissions of 125g/km, and the 218i makes a pretty good case for itself.

On the road it’s surprisingly lively, with the caveat that you do need to keep the revs up to make the most of the available performance; its somewhat paltry torque output means it’s not one for low-rev punch.

Cars weigh considerably more nowadays than they used to, but the 218i tips the scales at a relatively slight 1,340kg and, as the engine’s set well back, it does have a great balance which can be put to good use when punting along a favourite back road. The other feather in the 218i’s cap is that it’s available with the six-speed manual and, unless you can stretch to the M240i, it’s the only petrol-engined 2 Series that can be bagged with the manual ‘box. The Convertible version is a tad slower (0-62mph in 9.4 seconds), and the soft-top’s additional weight does make it feel a little bit more lethargic on the road.

Both models come with the eight-speed sport auto and, while the shift is exemplary, this transmission does take away one element of interaction with the driving experience, when compared to the feisty 218i. But, obviously, you’ll be travelling far faster in a 220i, and faster still in the 230i, which feels genuinely quick when on a charge.

Top dog among the petrols (we’re not including the M2 here as it’s a different beast entirely), is the M240i and, with 340hp and 369lb ft (the same torque as an E39 M5!) it’s devastatingly quick – 4.8 seconds to 62mph for the manual, and 4.6 for the sport auto. At around £38,000 it’s something of a performance bargain, and the only fly in the ointment is a chassis that’s on its limit when the going gets tough.

Driven quickly it’s very rewarding but, extracting the last couple of tenths from its ability bank can be quite daunting. It lacks the ultimate finesse you might expect of what is badged as an M Performance machine. However, it certainly makes a glorious sound and, provided you don’t try too hard in the wet, it’s still a very rewarding machine.

Diesel power might be demonised at the moment but, for many of us, it can still make a lot of sense. If you live in a built-up area and don’t do a huge number of miles, then you’ll be better off with a petrol. But if you’re less urban-based and do above-average miles, then there’s still a strong case to be made for a DERVsupper. And when it comes to diesels, BMW’s line-up is still very impressive, and its engines are less polluting than many of their rivals, too.

As you’d expect, as well as being lively performers, the diesels major on economy and, while the 218d and 220d are the most parsimonious, with identical 65.7mpg figures in manual form (68.9 as autos), even the 225d will return over 60mpg on the combined cycle. Obviously, you’d have to be very restrained to get close these figures, but the potential for going a long distance on a tank-full is certainly there.

Even the 218d feels acceptably rapid thanks to its mid-range torque, and you really don’t need to be travelling much faster than the sort of speeds a 220d can muster, unless you’ve got access to your own private race track!

Perhaps the diesels don’t have quite the chassis balance of their lighter, petrol-powered brethren, but it’s certainly not a night and day difference. What’s more, in inclement conditions, there’s no doubting the fact that the 220d xDrive will be by far the most sure-footed – and probably the fastest – car of the range on a crosscountry route during a downpour. It puts its power down so effectively that it gives you the confidence to push on, no matter what the conditions.

The 2 Series range – both Coupé and Convertible – is available in a variety of trim levels, but the further you go up the range, the more your choice is restricted. The 218i/d models can be specc’d in SE, Sport and M Sport trim, the 220i/d can be had as Sport or M Sport, while the 230i, 225d can only be ordered as M Sports, with the M240i model having its own unique spec.

There isn’t really room to go into all the various options here, but even SEs come with LED lights, sat nav and 17in wheels. As you might imagine, the Sports have ‘sportier’ trim, different alloys and sports seats, while the M Sports go the whole hog with M aero kits, 18s and a myriad of trim changes.

The best driving experience is to be gained by opting for the Coupé, as the loss of the roof on the Convertible does lead to a less rigid structure. But it’s by no means as bad as things were back in the days of the E30, although you can still feel a bit of a shudder when traversing broken-up sections of tarmac.

Dynamically, though, the Convertible’s not too far behind the Coupé, but the additional weight (on average around 145kg), does blunt its responses somewhat. It’s also slightly less practical with a smaller boot (55 litres smaller with the hood up, and 110 litres less with it down), and rear seat space is a little tighter, too. But if you’re after wind-in-the-hair motoring, then the practicalities are unlikely to matter that much. You can rest assured that the 2 Series Convertible is one of the best small cabriolets with four seats and some dynamic pizzazz, that money can buy.

In terms of choosing the best engine, that’s a little harder to determine. The three-pot petrol in the 218i makes it the slowest of the 2 Series models but, despite this, it’s still entertaining if you’re happy to drive it hard. But this will negate any economy benefits you get with the smallest engine, though.

The 220i is far quicker while, if you can stretch to it, the 230i really is a flying machine. Of the diesels, the 220d offers the best blend of abilities, feeling quick, well balanced and entertaining to drive. Ultimate performance comes with the M240i, of course, but bear in mind it’s over £5,000 more expensive than a 230i M Sport, so you’d really want to need the extra performance and the straight-six soundtrack, to make it worthwhile.

If forced to choose, I’d opt for the 230i M Sport as a coupé, as this model offers a real breadth of ability. Alternatively, a 220i in Sport spec would still be an entertaining companion, and not that much slower in real-world driving conditions, either.

In inclement conditions, there’s no doubting the fact that the 220d xDrive will be by far the most sure-footed

Top of the 2 Series range is the M240i; an impressive performer with a glorious soundtrack.

BMW, with its 2 Series, is just about the only manufacturer offering a rear-wheel-drive convertible model with genuinely useful back seats.

The 2 Series range – both Coupé and Convertible – is available in a variety of trim levels but, rather ironically, the further you go up the range, the more your choice is restricted.

The 2 Series Coupé, in 220d form, is a surprisingly accomplished and enjoyable performer.

The impressive four-cylinder petrol engine that powers the rapid 230i, delivers 252hp that’s sufficient to accelerate the car to 62mph in just 5.6 seconds, yet return 47.9mpg.