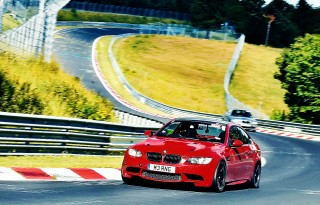 Whilst killing some time at the office I was surfing the internet and found a German track day company called pistenclub.de which holds around 200 track days a year all over Europe from Austria to Zandvoort in Holland. Browsing through the list of track days I noticed a two-day special at Spa Francorchamps and the one that interested me – the Nürburgring.

Spa wasn’t somewhere I had really considered going to at this point as it’s always known for being wet and as you will know from reading my previous instalments, I’d had my fill of wet track days to last me a lifetime. My real goal was to conquer the ‘Ring first and only then tackle Spa when I could give it my full attention, so I didn’t give it much more thought.

It wasn’t until Richy – another petrolhead friend of mine, was on the phone one night asking what I had planned Nürburgring-related – that I found myself mentioning the Spa/’Ring double header coming up, and somehow ended up joining the German club and booking the two-day event the following day – not that I needed a lot of persuading. 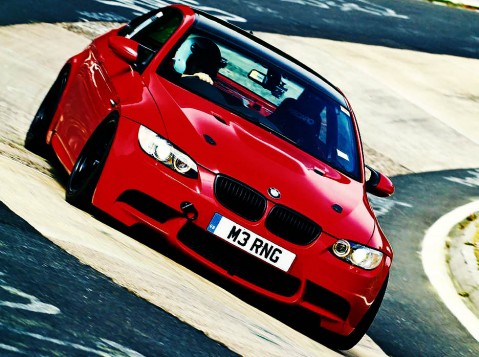 Prior to heading off for Europe I’d decided some more driver tuition was in order so I booked in with Daniel Gannon (www.carionics.com) who I’d met previously. He’s raced a lot in the UK and had spent many years at the ‘Ring. He’s currently in possession of a well sorted E36 M3 that he’s very competitive in. At this point, I was still playing with the suspension settings on my car and thought that his experience would help me with my setup and help me fine-tune it, as he’d know which way to go with the settings to suit the Nordschleife.

Last month I mentioned dipping my toe in the Time Attack water and as there was an event coming up at Rockingham I thought this would be an ideal circuit to make use of Daniel’s tuition. It was a new track to the calendar so my logic was that my class competition may not have been there, which may give me an edge on the cars I lost out to at Snetterton.

So the Rockingham track day arrived and I got there bright and early.   What a massive place it is! I think when they were building it they were expecting half of the county to turn up to spectate. The main circuit is a 1.48- mile American-style banked oval circuit – unique in the UK and one of only two similar speedways in Europe.

Once Daniel and I had attended the briefing it was time to hit the track and I admit I was nervous having someone of Daniel’s calibre sitting next to me. However, I soon settled down as Dan let me do my own thing to start with so that he could get a feel of the level I was at. I started off slowly to warm the tyres up and then began pushing on as I made myself familiar with the track. The circuit layout is not just the oval, but a good section of the banking and then a big infield area with some challenging chicanes, a blind crest and some massive G-forceinducing left-handers. A great little track – a bit rough around the edges, but I still enjoyed it very much.

Daniel seemed impressed with both the car and my driving, but thought he could improve my driving style by giving me a few pointers. Firstly was to change to trail-braking into the tight corners to use the weight of the car to flick the back end round.

Using this method, I also discovered how late you could actually get on the brakes – this was totally alien as at the point where you think you should be braking you now need to be braking 10 or even 20 metres later and your brain is screaming at you to hit the middle peddle, but you need to have faith in the APs and grip from the Cups and resist the urge to do so. I have to admit the hairpin before the little back straight and entrance to the pits is a really hard corner to get right.

As well as having the balls to hold the car on part throttle in the corner after the pit straight, you should also be mashing the throttle before the first hairpin – again going against everything your brain is telling you is actually possible! The strange thing is that as soon as you have done it a few times and your brain accepts the new real limit of the car, you find that you almost can’t believe why you were such a wuss in the first place…

To show the difference, I built up from a peak speed of 120mph at the beginning of the day to 135mph by the end of the day. One of the main factors that had my brain trying to over-ride everything Dan was telling me was possible, was the Days of Thunder-style five foot high concrete wall at the top of the banking which feels pretty hairy to be so close to it at 135mph… in your own car that you have spent your own money on!

I must confess that before I could get close to those speeds and the struggle I was having with the trail braking, Daniel asked if he could show me what he meant. So we swapped seats and he took me for a spin. I was quite intrigued to see what he thought of the car’s handling anyway so this was a perfect opportunity. His first words were that it was lively. We went through a series of corners and it got out of shape a few times. It was completely manageable, but he was surprised how eager it was to break away at the rear. He showed me the trail braking pointers and on the third lap hit 140mph on the banking, with all four wheels screeching in protest ever so slightly. With the limit found, we both agreed that 135mph was more than fast enough around the banking. He complimented the car on its balance and he really liked what I had done with the suspension setup so far, but still felt something didn’t quite feel right on the rear.

Having done a lot of research on the ‘Ring and how to get the best out of an E92 M3 around the track and having talked to plenty of experienced and rapid Ringers with E92 M3s I decided that altering the final drive might be the way forward. One of the chaps I spoke to reckoned the thing that made his M3 quicker was the fact that the final drive ratio in the diff had been changed for a much shorter one, which he claimed made it feel like it had an extra 50hp. So after some research I found a company in Germany that sells a short ratio crown wheel and pinion. It also sells a twoway Drexler type diff that has minimum preload and will lock the wheels when needed and unlock them on de-acceleration. The locking of the back wheels will help with traction out of the corners and the unlocking will stop the car from pushing on and under-steering. It’s very clever and I will go more into detail once I’ve fitted and tested it.

Thus it made sense to combine taking a diff casing to the company in Germany at the same time as attending the Pistenclub track day at the ‘Ring, but this made for a long day’s driving – we left home at 8am and reached the ‘Ring at 8pm! The next morning we headed straight down to the Devil’s Diner to sign on. Every car there was either a BMW or a Porsche. In fact there are three brandnew Cayman GT4s –one in yellow, one white and one in blue. When I was originally looking for a track toy, I was in two minds whether to get the E92 M3 or a Cayman GTS – I’m relieved I ended up picking the BMW.

Given that this was my first dry lap of the ‘Ring, the car felt good. It was floaty on the fast sections and felt like I was getting some lift. However, the yellow GT4 was soon dispatched, followed by the blue one. The white one wasn’t so easy. I latched on to the back of him but he was pulling away on some sections and then I could reel him back in on others.

A couple of laps later I ended up following a black and green 997.1 GT3 RS. I couldn’t quite get close enough for a pass, but we had some great laps together. I find that when I am at the ‘Ring, chasing or being chased is what gets me in the zone and makes me push harder than I would normally do on a clear lap with no other traffic. The day ended with no issues and we pack up shop and head off for Spa… The next morning I was raring to go so we arrived at Spa early to get signed on and this time there were even more Porsches. There were even a couple of Ferraris, some big Yank muscle cars, one other M3, but the rest were all posh Beetles. 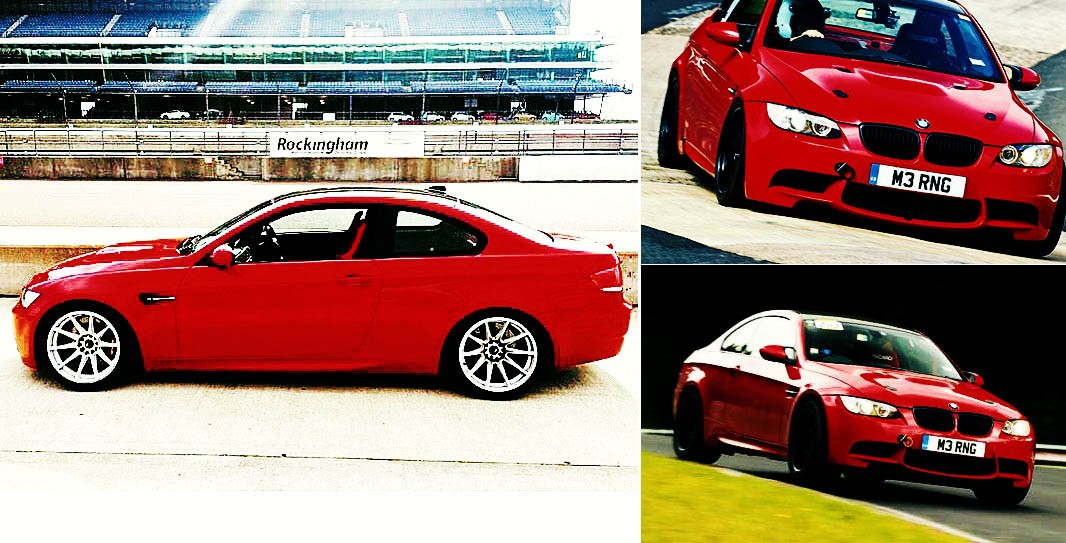 Straight out and wow, what a track! The compression into Eau Rouge is phenomenal. Once you are out of it and into the up-hill section, you really can nail it all the way to the right, right left at the top. There were more GT4s and this time I was catching and passing them with ease. The power of the S65 engine was slaughtering them around the shorter Spa circuit. In fact I soon came up behind the same black and green GT3 RS from the day before. One corner, two and was past him, then after another couple of corners I was gone! One car that I did have bother with was the new 991 GT3. They are just so fast that my car couldn’t live with them on either the corners or the straights, where they just disappeared into the distance.

Knowing Richy has been desperate to do Spa for so long, I thought it only fair to let him have a go, so we did about half a dozen laps and he was grinning from ear to ear: “As much as it pains me to say it,” he said, “this car is amazing.” Cosworth owners eh? The fact it did six consecutive laps without breaking down must have been an amazing experience for him…

I went back out and did another half hour session, killed a few more Beetles and then called it a day. What an epic trip. Finally I’m getting some good seat time and putting the knowledge I learned from the tuition to use on some new tracks I’ve never been to, the weather jinx has been put to bed and the car has performed faultlessly – bravo!