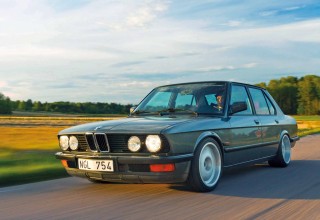 When Pontus Örnberg was looking for a daily driver, the humble 518 seemed to fit the bill rather nicely. And it did, for a while - but then he got bored and shoehorned an M3 engine inside it…

There’s a lot to be said for getting an early start. The roads are empty as the sun’s rising, so it’s the perfect time to be out for a spirited drive. Need to go shopping on Saturday? Get up early and beat the crowds. Off to a car show? Make sure you’re queueing up before the gates open – you’ll bag a good parking spot and your photos will be uncluttered by crowds. This is all very well on paper, of course, but the sound of your alarm clock going off in the morning is one of the world’s most disappointing noises. Getting out of bed ain’t easy. And this is doubly true for teenagers – what’s the point of starting early? The world will still be there if you crawl out of bed around noon-ish. 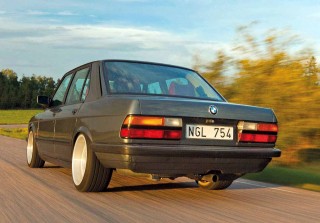 Pontus Örnberg would disagree, however. At the age of 16, he was up and at ’em before the larks had a chance to tweet; his dad, Mats, had built an oldschool tweaked 2002 in boisterous orange, and Pontus was keen to learn the ropes, so he built his own orange 2002 - this one sporting an aggressive turbo and fat Borbet As. If all this is sounding familiar, it’s because we featured the father-and-son duo back in 2015.

You’ll be pleased to learn that Pontus hasn’t been resting on his laurels since then. Having nailed together a brutal and phenomenally capable retro Beemer, he found himself developing rather a taste for it, and the next logical step was the E28 you see here. OK, the appearance may be rather more subtle than the Jaffa-hued machine that preceded it, but it’s no less angry under the skin.

“It was mainly the influence of social media that led me to buy this car,” he explains. “I got very inspired by the way others displayed their own models, and I really thought that they were good-looking from the first time I saw one. I heard from a friend that a guy he knew wanted to sell his 518, and that it was located just a couple of miles away from where I live. He wanted 8000 Swedish Krona for it. The car was in generally good condition except for a small amount of parking damage on the rear arch, and it only had 88,000km on the clock. I haggled, and managed to buy the car for 6000 Krona.”

The beginning of the project story starts as so many do – Pontus’s initial notion was simply to use the car as a daily driver and leave it as it was, there were no immediate plans. But of course, we all know how these narratives develop. Modifying isn’t a choice, it’s a compulsion. 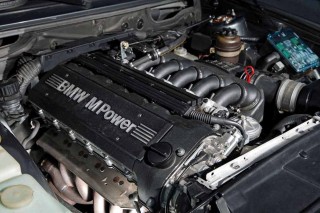 Impressively, Pontus pootled about in the 518 for around a year before his fingers really started to itch. He began by fixing that parking ding on the rear and, as an ethereal orchestra swelled somewhere off camera, life came at him fast. “I lowered it and changed the wheels too,” he says. “After this I drove it a bit, but mainly it was just in the garage. I decided to put a turbo on the original engine, but shortly came to the realisation that non-original turbos often fall apart. I heard about a guy who had a crashed E36 M3 with a complete engine and gearbox, so I decided to buy it from him and install the powertrain in my own car.”

The deadpan delivery makes this notion all the more entertaining, as that’s a hell of a lot of engine to shove into a 518. The S50B30 creates mighty, mighty power, and the E28 is usefully lighter than the E36, so shoving the stock engine from the newer car into the sylph-like frame of the elder can only be a recipe for success. Naturally, of course, it’s not just a case of unbolting the motor from the donor and bolting it into the recipient, there’s a bit of lateral thinking required. But Pontus would never let that faze him. His DNA doesn’t allow it.

“It’s an original S50, with a modified exhaust manifold to make it fi t,” he explains. “I custom-made the engine mounts myself, and the sump has been swapped for one from an E34, so that it fits with the front axle beam. The radiator is also an E34 item, and the air box is from an E28 528i. The E36’s electrical system has all been mated to the E28’s, and there weren’t really any major problems with that thanks to the way in which BMW’s different models match each other with only a few modifications. The only real issue is that I then had to do the motor vehicle inspection in quite a different way, having changed so much of the car - but it all turned out fine.”

He may be making it sound easy, but rest assured this is the hard-won tone of someone who really knows what they’re doing, and has been elbows-deep in this stuff from a very young age; couple that with an indelible passion for the brand and the unerring support of an equally obsessed father, and Pontus finds himself blessed with a sort of supernatural vision for how to modify cars. He sees how the car could be, then he logically picks through it to make it all happen. He’s like the Terminator. There are no problems, only solutions.

“I really wanted a fun and useful car, and this is what I got,” he says, with Räikkönen-like matter-of-factness. “I installed XYZ coilovers as well, and the brakes from an E34 540i as they fi t the car without any significant modification and they were necessary for the motor vehicle inspection.” The exterior has been left deliberately unassuming, which acts rather neatly to counterpoint the outrageous orangeyness of the other shark-nose in Pontus’s garage; “There’s no special styling on the car,” he says, and that’s all that needs to be said. The one embellishment was a set of BBS Style 5s, since swapped out for some Borbet A wheels on the grounds that they’re more appropriate for the car’s age and purpose. 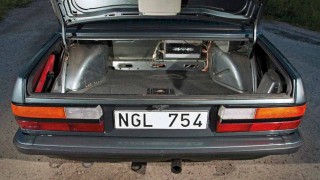 Creature comforts inside come in the form of an original E28 red leather interior that Pontus found and installed, along with one or two trinkets from the M Tech catalogue, and the overall vibe is a sort of period-modified exercise in ladderclimbing. Well, if you ignore the fact that the engine is a decade or so newer…

The result, then, is an interesting creation. The humble 518 has evolved into a modern interpretation of the classic M5, updated with a whole different engine family and while it’s now making the same power as its bigger brother, the hook is that Pontus’s E28 doesn’t have quite the visual drama of the M5. It’s an upscaled base model with a fat wad of horsepower sneakily tucked away within. A sleeper, ready to sneak up on the unsuspecting and embarrass them away from the traffic lights.

“I’ve had the car for around five years now, and I guess the drivetrain swap took up about a year and a half of that,” Pontus muses. “Is it finished? No, they never are, are they? I have a set of ACT splits that might go on, and the paint could be better. Improved road-holding from better shock absorbers would be good… but I’m modifying all the time, doing little bits here and there, subtle changes.” Creativity never sleeps. And you’d have to get up very early in the morning to outpace Pontus’s stealthy E28.

No hint of the 286hp on tap. Sexy red leather interior has been fitted. S50 fits perfectly in the E28’s engine bay. A little bit of audio enhancement in the boot.

THANKS To my dad, Mats