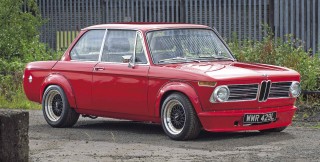 Mighty S14 2002 Fully-restored classic packing M Power muscle. 14 years in the making, this S14-powered 2002 is the result of one man’s enduring vision and incredible patience, and the awesome end result was more than worth the incredible wait. Words: Elizabeth de Latour. Photos: Ade Brannan.

It’s fair to say that the modded scene moves at a fair old pace: people build cars, do a season or maybe two and then part them out or sell them and move onto the next build, always chasing that new modified high. It’s rare to see one owner hanging onto a car for more than a few years and those that do are most definitely the exception rather than the norm. We don’t blame anyone for wanting to chop and change their cars – variety is the spice of life after all, and there are an awful lot of awesome BMs out there to sample and, in addition to that, for many of us on the scene the thrill is in the build. All the joy comes from taking a standard car and transforming it, making it your own and once it’s done there’s nowhere left to go and the search for the next project begins. What we have here, though, is very, very different; it is in many ways the antithesis of the quick-fix thrill build because owner Cameron Weir hasn’t just had his 2002 for 14 years, it took 14 years to complete the build and to have the patience to see a project like this through is truly impressive. 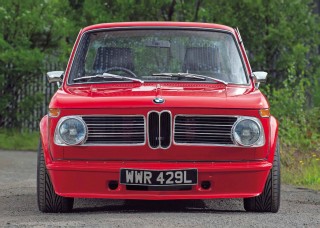 It’s hard to get your head around the fact that when Cameron first started work on his 2002 project he was 33 and now he’s not a million miles away from 50 (sorry Cameron…); this is the sort of time frame that’s hard to comprehend when it comes to cars. 14 years is a lifetime in the motoring world and not just in terms of modifying – that’s long enough to witness three generations of a BMW model so to stick it out with just one car is really going some, but then again Cameron has an awful lot of love for BMs and the 2002 in particular. “Ever since I owned my first 2002 at 18 years old I have loved them,” he tells us. “Even when I got my first 2002 it was an old car, it was 18 years old, same as me at the time, but it was cooler, faster and cheaper than a Ford Escort, which everyone else seemed to be driving. It was a rusty old thing and I always said, once I eventually had to part with it, that I would get another when I could afford to get one and do it up right. Also the car that probably inspired me the most was a friend’s car, JES 96P, Colin Gallie’s 2002 tii which was just stunning, and still is to this day 29 years on,” he says with a smile. So with dreams of building his perfect 2002 staying with him throughout his adult life, Cameron never gave up and when he finally found himself in the position to make that dream a reality he wasn’t going to do anything less than go all-out.

“You’ve got those fabulous fat bolt-on Turbo arches, which really pump up the car’s stance, turning down the cute and cranking up the brute”

“The car I eventually got I found on the very basic Internet back then on a classic car web page, it had one owner from new with only 26k on the clock; the picture that the gentleman posted to me, as he could not upload them at the time, looked great so I bought it without even seeing it,” he grins. “I only had it in Scotland a few months before I sent it to the Jaymic workshop for Mark and James to check over and get rid of any rust ready for painting. From there it went over to Harry Hockley Motorsport in Wales to get the modifications carried out and there it stayed for about 14 years, getting very little done each year as they always had big jobs in and were busy building rally cars and I had very little money to spare,” he explains. “The only good thing out of it taking so long is that most people you speak to that have carried out a restoration/modification on a car say ‘You’ll never get back what you’ve spent on it’ but in this case the value of the car and the engine has gone up so much that I will, if I ever sell,” he adds. 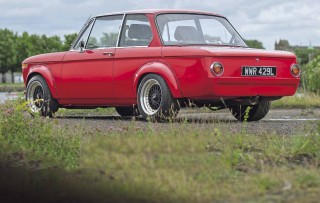 With the project taking so long to complete there was never really any rush at any stage of the build to get any aspect completed to any sort of deadline and this made the whole process relatively stress-free for Cameron. At the same time, though, it was rather frustrating but we get the sense from talking to him that he was just happy that progress was being made and he had no other way of completing the build so it was just a case of being patient and letting it happen. “Collecting parts in the beginning used to be a lot harder than nearing the end of the project; as the Internet evolved it became a lot easier to source from Europe and the USA,” he says. “I also need to thank all the members of the 02forum.co.uk for all their help and input over the years – I could get a call from the garage in the morning about some query or another, post on the 02 Forum and by lunch someone will have posted the answer,” he adds and a strong community is so important when you’re involved in a major build on a niche model like this. It’s fair to say that the car you see before you owes its existence to an army of enthusiasts around the globe and it’s all the better for it.

You might perhaps be wondering if this build was truly worth the wait but a cursory glance at the spec sheet will tell you that it most definitely was because Cameron has created a real mini monster with this 2002. At the heart of this build sits the engine and that happens to be a BMW S14 tucked into the 2002’s engine bay. The installation is insanely neat and tidy and the frantic four-pot looks like it always belonged in there; it breathes through a massive RamAir filter while a selection of blue hoses add a final finishing flourish but it’s the massive M Power script on the cam cover and intake plenum that dominates under-bonnet proceedings and it reminds you that this is what makes this build seriously special. A full custom exhaust system ends in a discreet single pipe tucked beneath the rear bumper but it delivers a seriously scintillating soundtrack, with the S14’s awesome hard-edged bark adequately amplified and it gives this 2002 a seriously hardcore character, while power is delivered to the rear wheels via a Getrag 265/5 dog-leg gearbox. Considering how little the 2002 weighs, the addition of the S14 has given Cameron a seriously rapid little road rocket and this combination of car and engine delivers a driving experience like no other. 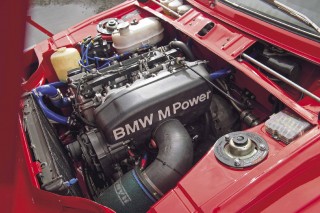 The exterior is immaculate, as you would expect from a classic car that has undergone a full restoration, but Cameron has added a few little touches to give his 2002 a more individual look and to make it stand out from the crowd. First up you’ve got those fabulous fat bolt-on Turbo arches, which really pump up the car’s stance, turning down the cute and cranking up the brute and they let you know that this little ’02 means business.

Stuffed beneath them sit a set of 15” BBS RM splits and the combo of naked lips, gold bolts and black centres is a classic one and every element of the triumvirate works perfectly against that bold red body while the classic cross-spoke design is truly timeless and the perfect match for a car like this. Cameron has also added a replica Turbo front bumper – chosen as he prefers its two intakes compared to the real deal’s single item – and it further aids in giving this 2002 more road presence and a more purposeful look. On the inside, meanwhile, you will find a pair of period Recaros from an E12 M535i that Cameron had re-covered in black leather, along with a pedal box – which allowed the brake servo to be removed from the engine bay so that the S14 had enough room to fit – Stack dials and a B&M short-shifter with a CAE selector rod for snappier shifts. Chassis upgrades were, of course, an essential aspect of this build as you couldn’t take something like the 2002, chuck in an S14 an expect it to be fine with the whole situation and this car is running a combination of different elements. 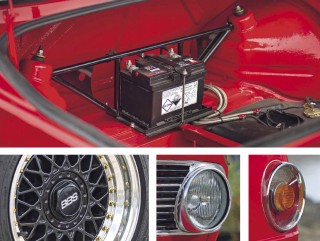 Up front you’ll find Ireland Engineering coilovers with Bilstein inserts while at the rear Cameron has opted for Bilstein shocks with a set of custom springs and the combination works supremely well both in terms of looks and handling performance. A decent set of brakes was also high on Cameron’s shopping list as ’70s braking performance leaves a lot to be desired by modern standards and especially with a lot more power on board. This 2002 is therefore now running a set of Mitsubishi Evo III discs and calipers all-round with Mintex 1144 pads, which have been designed for fast road and light track use and this setup delivers impressive stopping power that’s perfect for Cameron’s needs.

This has been a build of epic proportions and it’s not been an easy one, either; “Lots of problems we encountered are now in the past and there were too many, I try to not go back there,” Cameron sighs. “It’s always a challenge carrying out a restoration; now the car is back with me in Scotland there are still little bits that always need attention, which is obviously part of the love/hate relationship we have with old classic cars,” he adds, “but there are no more plans at the moment, just enjoying driving it for now,” he says with a smile.

The 2002 that Cameron has created is spectacular but this is about so much more than just the car; this is about the whole journey, the adventure, the incredible amount of time that has gone into this build and it’s the story behind it that is so engaging. At once you feel both frustrated for Cameron but you empathise with his situation and sense his overwhelming joy at finally having his beloved car after waiting for so long. They say good things come to those who wait and it’s so true; we can’t even begin to imagine what emotions Cameron went through when he finally got his car back but the joy he feels whenever he drives this awesome little machine is surely unparalleled. This is a car that has been loved, will be loved and driven and enjoyed like no other and this is a special build beyond all others.

THANKS Harry Hockley Motorsport, BMSport, Jaymic workshop, Pete and Faye at Jaymic (parts and spares), Colin Gallie and Ross Coulter for all their BMW 2002 knowledge over the years, Dave Gamble for his advice and engine building skills, Stainless Creations, Skidz of Falkirk for sounds, security and tyres

No room under the bonnet so battery has been moved to the boot. Bolt-on Turbo arches pumpup the stance. Epic S14 is undoubtedly the star of the show. Interior looks factory-fresh E12 M535i Recaros up front. 15” BBS RMs look great. Stack gauges have been fitted. Replica Turbo front bumper with twin intakes.