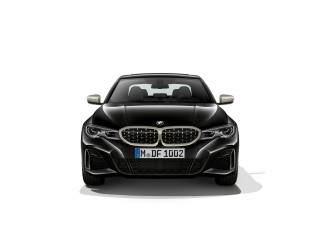 The late Peter Wheeler, of TVR fame, is widely reported as saying that the air intakes around the front indicators on the Chimera were the result of some overenthusiastic chewing from his beloved German Pointer, Ned. “He was charging about as usual,” Wheeler said, “and took a bite out of the polystyrene model of the Chimaera we had on the table.”

Whether this is an apocryphal story or not – and I’d suggest not as the above quote comes from the TVR website – what I’d like to know is whether Ned has any progeny who might be available to pop over to Munich to take a chew on some of the latest BMW designs?

I’m not talking about the obvious munters that are beyond help, such as the X7 and the iNEXT, but the recently revealed M340i. While it’s not the greatest design to emerge from Munich’s drawing board, I reckon the new G20 3 Series is quite a tidy-looking piece of kit, and its general proportions look pretty decent. It wasn’t helped by a set of particularly uninspiring press photographs that did little to accentuate its shape but, overall, it looks smart and I’m sure it’ll drive delightfully.

As is BMW’s way these days, the M Sport model will be available straight from the launch, and looks suitably aggressive, although there’s a lot going on around the front bumper area. But now we have the M340i and BMW, it seems, isn’t just happy stuffing its largest current straight-six under the bonnet – it’s had to fiddle with the styling, too. And the front corners… well, they’re just a mess, in my opinion.

There appear to be about 20 different straight edges all competing to be the one that catches your eye, and the overall result is an absolute dog’s dinner – it looks bad in the head-on shot and truly atrocious from the front three-quarters. It reminds me of a cross between a praying mantis and some sort of unsavoury alien-insect from a particularly bad B movie!

Where is the subtlety, where is the elegance that used to be a BMW hallmark? I’m sure BMW’s design team was aiming for a suitable level of aggression, but I think it’s gone way overboard – it’s just too fussy to be anything other than faintly ridiculous. Couldn’t the standard M Sport bumper have been used? Even that’s already overly busy, but at least it’s not a caricature of itself. But the bumper’s not the only disaster. What on earth is going on with the kidney grilles? For starters, I’m not a fan of the way BMW’s latest designs have fused the two parts of the kidneys together. It worked when the kidney grilles were taller than they were wide, but this new take on them makes it look more like a gone wrong Kia than a BMW. And if BMW really wants to be associated with Kia, then the best way to do that would be to adopt its seven-year warranty policy, not its front-end styling.

And where are the slats? Kidney grilles need to have slats – these little lumps of ‘metal’ (I’m assuming they’re plastic for cost reasons) look like the metal teeth of some second-rate hoodlum in a 1990s Hollywood film – and the X-shaped lines that run between them are all wrong.

If I worked at a BMW aftermarket company, I’d already be busy designing a front bumper and set of kidney grilles that would do the car justice – I reckon they’d sell like hot cakes. Either that or I’d be buying up German Pointers and releasing them en masse into the BMW design studios – the Chimera was a good-looking car after all, unlike the M340i.

I think that the front-end styling on the new M340i looks like an absolute dog’s dinner.

Where is the subtlety, where is the elegance that used to be a BMW hallmark?