Purists turn away, sticklers and pedants make a brew; there’s nothing here for you. This car comes from a fantasy land. A far, far-away place where Cilla Black pilots an E-type beyond the rings of Saturn, while Lofty England runs Mission Control. Where ageing white male celebs believe they can recapture the cool of Simon Dee, the 1960s TV personality, driving up Manchester’s Piccadilly Plaza in a white E-type Jag with an adoring kinky-booted blonde in the passenger seat. And where an E-type can cost almost a million quid, and a gran turismo has a soft top. 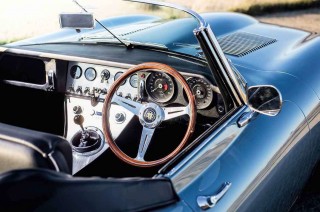 Actually that last bit of fantasy was started by Jaguar. ‘The Jaguar ‘E’ Type G.T. Open Two-Seater’, intoned the brochures back in the 1960s. Nor can one accuse Eagle of pushing the price of E-types through the stratosphere, not when Jaguar Special Vehicle Operations built six Lightweight E-types to use up the unused chassis numbers and sold them for more than £1 million each.

Nevertheless, with a 4.2-litre Series II drophead costing up to £100,000 on the open market, by any measure the Eagle Spyder GT is an eye-wateringly expensive E-type. It costs a basic £695,000 plus VAT, a total of £834,000, not including the additional options of exclusive-to-Eagle 4.7-litre aluminium cylinder block from Crosthwaite & Gardiner, tubular driveshafts, and a magnesium-alloy differential housing for the famous boxed-in E-type rear suspension, which in my day you bought for £200 from a scrapper and fitted into an undeserving Vauxhall Firenza special – it’s as near to a million as makes no difference. So yer basic, run-of-the-mill Eagle test drive consists of arriving at Henry Pearman’s immaculately haphazard workshops in darkest East Sussex, taking a tour, a tea and then getting behind the wheel and ejaculating ‘Grouak’ noises as it whizzes off – so far so good.

Whoa mister. Hold your horses. Eagle? E-type? What’s going on? We need a history medley, spinning back through the decades in a whirl of televisual magic. Well, 32 years at least, to when Eagle was founded by Henry Pearman, car collector/restorer/dealer/driver and allround action guy who singlehandedly changed his E-type’s rear tyre at the side of the road in the Pirelli Classic Marathon. Try it sometime, it’s not easy. Eagle did nice rebuilds, restorations, fettling and titivation, moved to the current buildings in 1992, collected Paul Brace and fellow director Matthew Dewhurst on the way and, at about the same time, got a commission to design and build the ultimate E-type. Hmm. While ‘the ultimate E-type’ might sound like something thought up by a men’s magazine editor and a design guru, the car itself, Eagle 1, surpassed its billing, being impressive enough for Eagle to get a second order, then a third (they’re now on the 36th Eagle). Problem was, waiting lists grew to almost four years and the wealthy aren’t known for their patience. 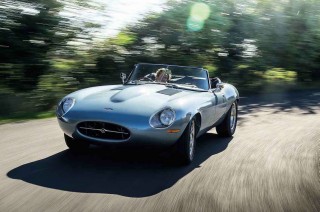 Then one man (American, natch) asked for something a bit different – ‘a bit special’, says Brace. He’d first met Pearman when he was rallying a Porsche, so the 356 Speedster was in his mind when they suggested cutting back the roof, sculpting the rear of the cockpit and reducing weather protection to a mere tonneau. Brace even took one of their steel donor cars and cut it about to make a prototype just to find out whether or not it would work visually.

‘E-types are so naturally beautiful, I couldn’t take the chance,’ he says.

Add a strengthened, deseamed aluminium alloy body with a lower, more steeply raked windcreen created by RS Panels and then painstakingly built-up with Eagle’s own modifications such as power steering on a rebuilt version of the existing steering rack, Eagle’s own five-speed transmission and differential casing… the list goes on. The result was a machine of rare distinction. It’s as much the detailing as the whole that marks such cars out: the fasteners, the fit and finish, the feeling that individual components could be taken off the car and observed as objects of beauty in their own right. It drove pretty well, too; the first customer was well pleased.

Then they gave it to TV car bloke Jeremy Clarkson to test and, while Octane contributor Mark Hales’s words (‘you test the machine, not its owners’) are in mind here, there’s little doubt that the great communicator’s Stentorian endorsement has been a double-edged sword. ‘In some ways it’s been the bane of our lives,’ says Brace, explaining that the high-profile association with the Speedster (of which just five have been built; another is in build right now) ‘has intimidated people from coming to see our range of standard steel-bodied cars.’ Brace stops himself from saying ‘affordable’, for no E-type is cheap these days, but there are some lovely used Es in Eagle’s showrooms priced between £200,000 and £300,000. Nevertheless, from its website to its photo gallery, Eagle rejoices in its role as purveyor of Jags to the stars, so it hasn’t done too badly out of Clarkson. 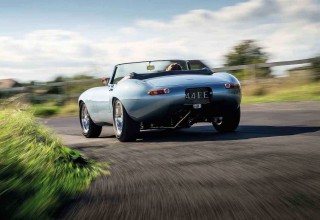 Unassailably priced it might have been, but there was one democratising drawback with the Speedster: the weather. Few stayed in England. Eagle’s 18-strong staff set out to create a low-drag coupé version, based on Jaguar’s single quixotic attempt to keep the E-type competitive in GT racing back in the day.

‘We’ve done a few of those,’ says Brace, ‘but there was a missing link. That’s why we’ve built the Spyder GT. We’ve kept much of the Speedster, but with a high, custom-built windscreen and a hood.’

It’s the fourth iteration of Eagle’s enhanced E-types; Brace and I stop gassing and get it out of the garage. I’ve crawled all over it and, unlike so many of its rivals, the build quality is immaculate. Even the steering wheel is straight, something not all fresh restorations manage. There’s plenty of love that you don’t see, including a dinky little fusebox that sits behind the instruments, but what you do see is well-chosen and mostly Jaguar in origin. The seats are specially bolstered and mounted two inches lower so you don’t sit with your hair above the windscreen. One contentious point is the central console, a bespoke item, which is trimmed around a sheet of Jaguar-style dimpled aluminium and sees the handbrake hidden under an Austin Powers-style hinged cover. 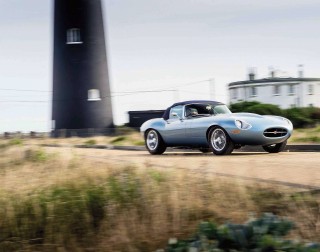 Press the button and the 4.7-litre snarls into life. Breathing in through triple two-inch SUs and out through 2½-inch diameter exhausts, the all-ally six is good for 330bhp at 4800rpm and 340lb ft at 3600rpm and generates performance as well-balanced as those figures indicate. Top speed for the brave is claimed at more than 170mph and 0-60mph in a believable sub-five seconds. If you’ve ever seen an E at over 150mph, the aerodynamic lift defies description, but Eagle have long countered this tendency with a deeper front valance on all its commissions, including the Spyder.

But it’s torque that wafts this car along and makes it such a relaxed companion. The gearbox changes beautifully and has long ratios since the engine is man enough to pull in top from 1000rpm. Extend it up the range towards 5000rpm and you fair rocket down the road. ‘We encourage customers to keep below 5000rpm,’ says Brace, ‘but it will go round to almost six.’

Big performance is no more than you’d expect with a kerbweight of only 1029kg, but it’s the way this car travels along undulating and occasionally potholed Sussex lanes that is remarkable. Öhlins coil-overs and revamped steering geometry with a bit more kingpin inclination and negative camber for the big Vredesteins (215/60 R16s) ensure it sits well at speed without the slightly horrifying impression of piloting a runaway train that comes with a standard E-type.

The ride is comfortable and supple, not crashing over bumps or through potholes. The E-type tub was always stiff, but the modifications imbue almost modern levels of rigidity, which in turn give the Öhlins set-up something to work with. There isn’t enough wheel travel for the damping to have the light and shade of a modern car, though it also doesn’t have that rolling-onto-the-outside-front- tyre-before-all-hell-lets-loose characteristic of a standard E, and, despite efforts to improve the suspension geometry, the steering isn’t the most communicative, though it is well-weighted and precise. Perhaps losing the power assistance would help; after all, the car weighs over 200kg less than a standard E and most of that is out of the front end. Still, the dynamics feel sound and big vented AP four-pot calipers provide lovely, progressive stopping, pulling the car up all-square. 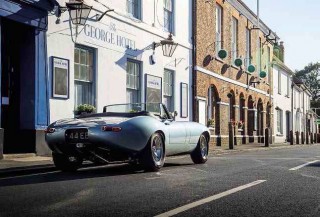 And everything works. There’s ne’er a sticky switch nor a wobbly needle, it doesn’t rattle, doors close without a slam and it doesn’t smell of hot oil, or fuel, just leather and the countryside.

It’s just an observation, but the Jaguar marque seems to attract superlatives of restoration like no other marque. Eagle makes some big and, in most cases, justifiable claims, and it seems like almost a guilty reaction to the radical changes they have wrought. This car isn’t particularly like an E-type to drive; it’s much, much better than that and you can throw it into situations where a standard car would be more than happy to kill you.

Think of the Spyder GT as a magnificent piece of postproduction engineering, enough to render disheartened anyone who has lain under their Jag in a freezing garage with numb fingers and a chilling mug of tea. I find myself profoundly respectful and admiring although, just as pulled pork is roast meat for those who can’t carve, an Eagle special is for drivers who don’t wish to wield a spanner. And so I sneak back into Eagle’s packed showroom before leaving, where Henry Pearman’s steel-bodied E-types sit slumbering gently in all their glorious, patinated authenticity. With due deference to the extravagant and exotic Eagle specials, it is, I guess, a case of each to their own.

Above and right. Whichever angle you look at it from, the Eagle Spyder is like a standard E-type – but different in so many subtle ways.

Right. The stance is meatier, the detailing tidier. What you can’t see here is the difference wrought by a 330bhp, 4.7-litre straight-six.

‘I’ve crawled all over it and, unlike so many of its rivals, the build quality is immaculate’