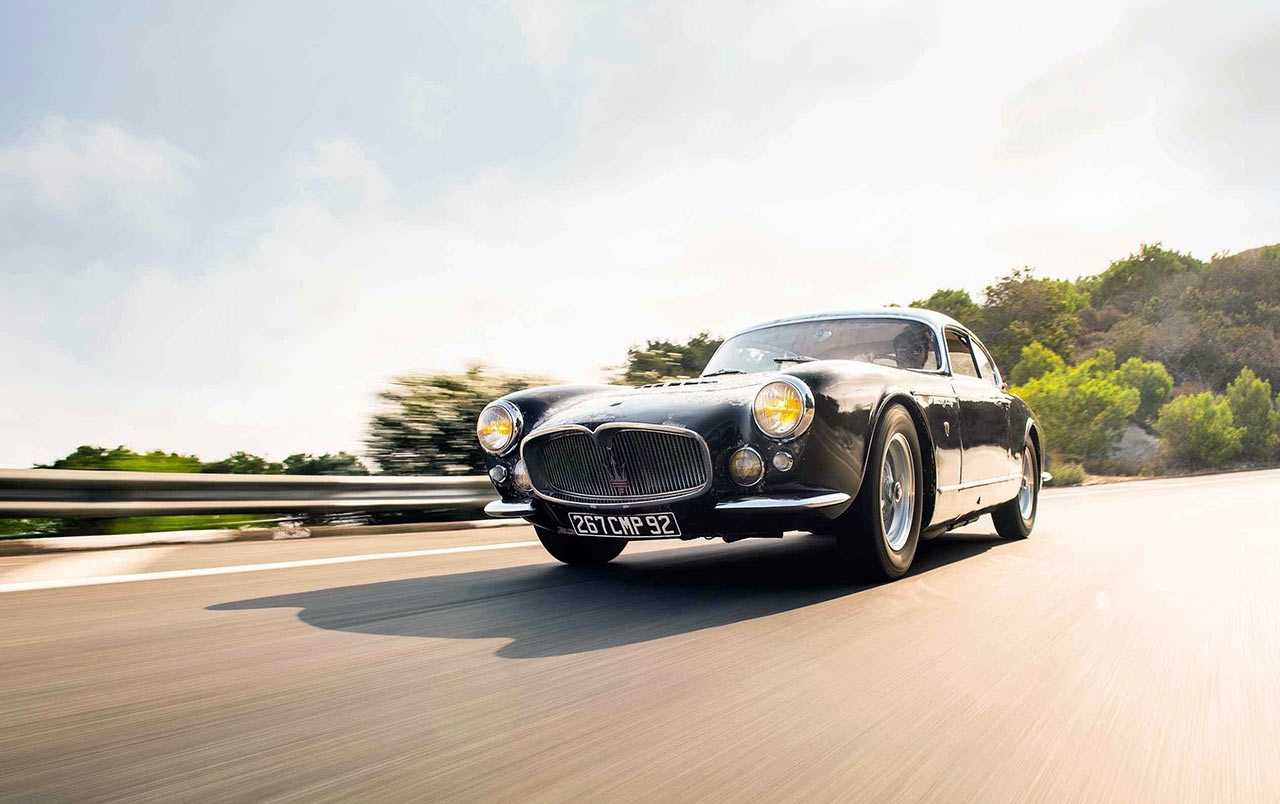 Back from the shed. One of the stars of the Baillon barn-find collection in 2015 was a long-neglected Maserati A6G 2000. Now it’s on the road again. Words David Lillywhite. Photography Dirk de Jager.

I’m so glad I didn’t restore it!’ says Jonathan Segal as we receive yet another thumbs-up from an enthusiastic onlooker. ‘It was only after we got a second place at Pebble Beach that I realised how special it is.’

We’re driving the Baillon Collection Maserati, co-star to the headline Ferrari 250 California Spyder, both found in a dilapidated state at a French château in 2014, along with more than 100 other derelict machines. After the mother of all rescue operations, they were offered for sale by Artcurial at the 2015 Rétromobile show, making news around the world – and now, two years on, the car looks pretty much as it did when found but it’s blasting along Californian backroads to the delight of all who see it (as well as its two occupants), rather than languishing unseen in rural France.

‘For all its barnfind scruffiness, this is a jewel in the Maserati crown’

The Maserati, a 1956 A6G 2000 Gran Sport Berlinetta by Frua, achieved the second highest price after the Ferrari, the winning bid of €2 million ($2.2 million) placed by the man now next to me as we drive through picturesque Carmel. Little did he know the anguish he’d go through in deciding what to do next.

‘I was right at the front, completely maxed out. It got to $1.7 million. “I can’t do it!” I thought. Then I went to $1.72m [before commission]. I couldn’t go up another dollar. Then “Bam!” It’s sold to me, the kids are going crazy! We’re just a normal family; this was really something.’ Jonathan is a successful architect but this was serious money to him, much more than he’d wanted to pay. Yet he loves Maseratis, had already restored an A6G Allemano, and the romance of the Baillon Collection had reeled him in, as it did so many others.

The Maserati had sat alongside the ex-Alain Delon Ferrari 250 GT California since 1971, both cars relatively well-protected in a stone barn away from the rest of the collection, most of which had been left more exposed to the elements in open-fronted sheds. Old magazines and boxes had been piled on top of the Ferrari but the Maserati – actually the more thoroughbred of the two cars – had escaped this fate.

In fact it seems that Jacques Baillon had gained a renewed interest in the Maserati in 2000, because he wrote to Maserati requesting technical information on it, and also began the task of replacing the clutch. Sadly, he never finished the job, and the car was found with parts of the transmission tunnel and bulkhead removed. Octane’s own Glen Waddington was one of the first to visit the château, and remembers his shock at seeing such a beautiful car so neglected. ‘What struck me most was the lack of front bulkhead,’ he recalls. ‘It didn’t look good!’

It has a remarkable history, an ABC of desirable provenance from the day it was delivered to coachbuilders Frua in Turin on 9 February 1956 for a 2+2 berlinetta body. Five months later, on 6 July, it reappeared from Frua for fitment of engine and final trim parts, recorded in the factory records as engine number 76 with twin Marelli ignition coils, body finished in black with ivory interior and Veglia instruments. Why the emphasis on the twin ignition coils? Because this confirms it as one of the 150bhp, 125mph twin-sparkplug versions.

As soon as it was complete, the Maserati was delivered to France where it passed its Service de Mines test on 2 August 1956. It was registered on the same day in the name of architect (nice touch, looking back from its current ownership) Jacques Fildier, who’s also known to have owned several Aston Martins. He’s recorded as having paid 2,500,000 lire, a relatively low price that must refer to the chassis only; Frua would have billed separately.

Interestingly, several weeks later, the car was exhibited on Maserati’s stand at the Paris motor show in the wonderful Grand Palais. With Maserati only building cars for definite orders, borrowing cars from new owners was its only option when it came to show stands.

As it was, Fildier sold the car within a year, on 12 July 1957, to fellow Parisien Marcel Chalas. Less than two years later Chalas advertised the Maserati for sale, though it wasn’t until 17 December 1959 that it sold – to Roger Baillon. And from there it passed from the father to his son, Jacques Baillon, meaning it remained in the same family for 56 years, until the grandchildren of Roger offered the collection for sale via Artcurial.

Roger Baillon had started out as a French Air Force mechanic, but went on to build lorries to carry chemicals used to clean the Paris Métro; by 1950 the business had become successful enough for him to buy the château and develop an appetite for exotic cars, which rather surpassed his ability to maintain them.

The collection grew to more than 200 cars at one point, and was transferred to Jacques – but when the Baillon company began to flounder in the late 1970s, some were sold off. Still, there were 114 left at the part-restored château in 2013 when Jacques died. To all but a handful of people the collection was a secret, and its discovery unrivalled in its variety and value.

As for the Maserati, when Jonathan Segal became its proud fifth owner, he’d planned to have it restored. But something got under his skin… maybe it was the dust, maybe the nagging of friends, but finally he realised that he couldn’t bear to lose that patinated look.

And so Jonathan made the Maserati roadworthy, but left the cosmetics untouched wherever possible. It makes for a deeply evocative sight, tugging at the heartstrings in that strange way that barn finds do.

‘I got the fluids changed, had the carbs redone, changed the sparkplugs and the points – and it started! I’ve left the original three-blade cooling fan in place but it still runs quite cool. I fitted new outside-laced Borrani wheels, the same as the originals, and Pirelli Stelvio tyres.’ And that’s it, though Jonathan is looking at ways to stabilise the condition of the bodywork.

So it’s quite a moment to witness, when this nowfamous barn find roars into virile life, its three sidedraught Webers breathing deeply and exhaust barking as the engine clears its lungs. The sound is mechanical and throaty but, with six cylinders and only a modest 2.0 litres capacity, those little pistons fly up and down their bores at the slightest touch of the accelerator.

It’s more vociferous than you might expect of such a sleek-looking GT, but remember that this is only one step removed from a racer, and even its svelte clothing is of the lightest-gauge aluminium that Frua could get away with for a road car.

‘It’s so loud, really gnarly,’ says Jonathan, but he’s not shouting, and he is grinning, so it’s not so bad. Still, the engine noise reverberates through the car as we gun it onto the highway, double-declutching in deference to the tired synchromesh of the four-speed gearbox, as the short lever clacks through its gate with the most minimal of movements.

The Maserati feels quick and nimble from the outset, but the harder it’s pushed, the more it responds. The engine thrives on revs… ‘It sounds great between 4500 and 5000,’ says Jonathan, and he’s absolutely right. While some straight-sixes are all about torque, this one is more playful, more ready to race.

The ride, you won’t be surprised to hear, is firm, though not jarring, probably because there’s so little weight to the car. The suspension is basic, wishbones and coils at the front, semi-ellipitic leaf springs at the rear, each corner controlled by a Houdaille hydraulic lever-arm damper; all typical of the period. It skips sideways on bumps, will tramp its axle a little under hard acceleration, but it feels perfectly of-a-piece.

There’s still mechanical work to be done. There’s even still dust to be swept out, if Jonathan can bring himself to do so. But the Baillon Maserati feels every inch the thoroughbred that it is, a model with its roots in racing, the twin-cam engine (introduced in 1954) derived from that of the A6GCS and A6GCM race cars of the time.

And though the A6G 2000s are cited as production cars, just 60 of them were built between 1954 and 1956, wearing bodies built by a variety of coachbuilders – Allemano, Zagato and, rarest of all, Frua. Only four Frua berlinettas of this type were built.

Thank goodness, then, that it survived just-about intact. For all its barn-find scruffiness, thanks to its incredible originality this a jewel in the Maserati crown. The only modification over its Paris motor show specification appears to be a different front grille, actually more elegant than the original, and fitted at some point between 1956 and ’1959. Was the first grille damaged or did the car’s owner at the time simply desire a more stylish alternative? No-one has worked that out so far.

Now, curiously, it’s also special for the neglect it’s suffered, and not only the way in which the paint has lifted off the alloy panels, leaving great swathes unprotected. It’s as you look closer, and spot the degradation of the enamelled Maserati bonnet badge, the long-term corrosion of the Trident that fronts the grille, the pitted plating of the coachbuilder’s badge on the sides of the front wings, each bearing ‘P Frua Torino’ cast in script – the ‘f’ of Frua particularly exuberant in style – and the fading chrome of the Marchal headlight surrounds, that the magic of neglected originality really seeps through. It’s evocative, but you do wonder how Roger or Jacques Baillon managed to avoid at least smearing the brightwork with grease now and again.

Still, when would you ever see such detail parts in such a state any more? So many cars have been restored to within an inch of their lives nowadays. Another onlooker waves and grins, and Jonathan smiles back. ‘If I’d have re-done this car I’d have destroyed it,’ he says.

‘It roars into virile life, three Webers breathing deeply and exhaust barking as the engine clears its lungs’

Clockwise from top Paint still flakes from the alloy body; beautiful simplicty of instruments and steering wheel; boot still lined with Baillon dust; gearshift feels mechanical and direct; never has a Maserati badge looked so neglected; leather is cracked but is somehow still in one piece. Clockwise from top left As found at the château; interior virtually untouched; an arresting sight on the road; in France long before it was laid-up.