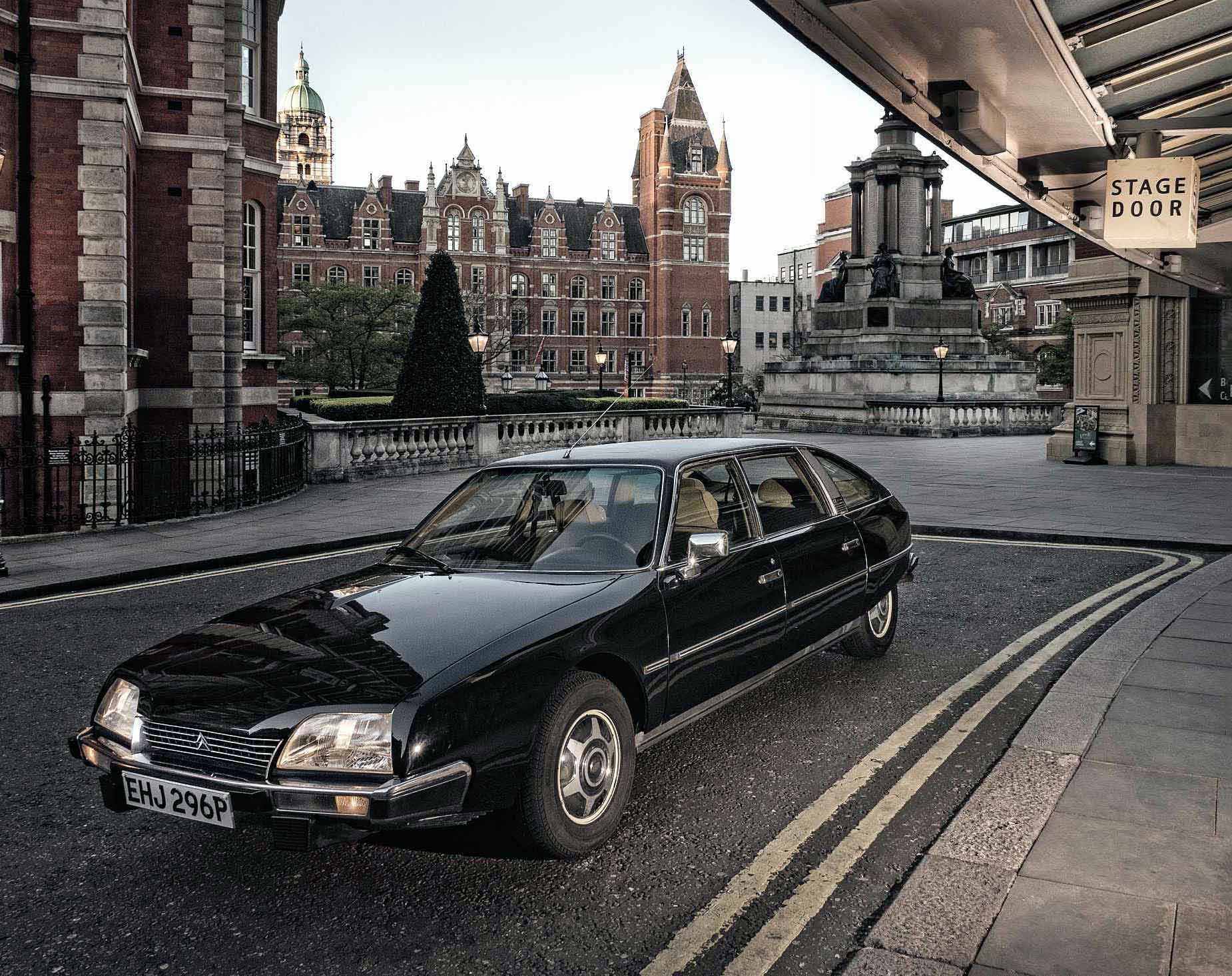 AIR TO THE THRONE

Gendarmes on motorcycles, that’s what I need. So I tell myself as I snuggle a little deeper into the plush, cosseting seat cushions. A fleet of those tricolore bikes with all the flashing lights, please. And the gendarmes should have the spiffy uniforms with the gold braid, befitting one’s importance to The Republic. Or maybe a chauffeur-slash-bodyguard in mirrored shades, and a briskly efficient stenographer-slash-PA updating my busy schedule while I waft along in smooth, velvety silence, pondering serious responsibilities.

Either scenario would suit just fine, actually. Many Citroën loyalists consider the CX series the high-water mark of the marque, a tribute to its engineering courage and brilliance, achieved before the sad decline that ultimately resulted in a Citroën line-up that now offers not a single, solitary wet-suspension set-up, for goodness’ sake. The CX Prestige, however, was boldness of another magnitude – transportation for the business and cultural elite, and for the foremost of French Government dignitaries. Also, as it transpired, some governmental figures decidedly not so French. 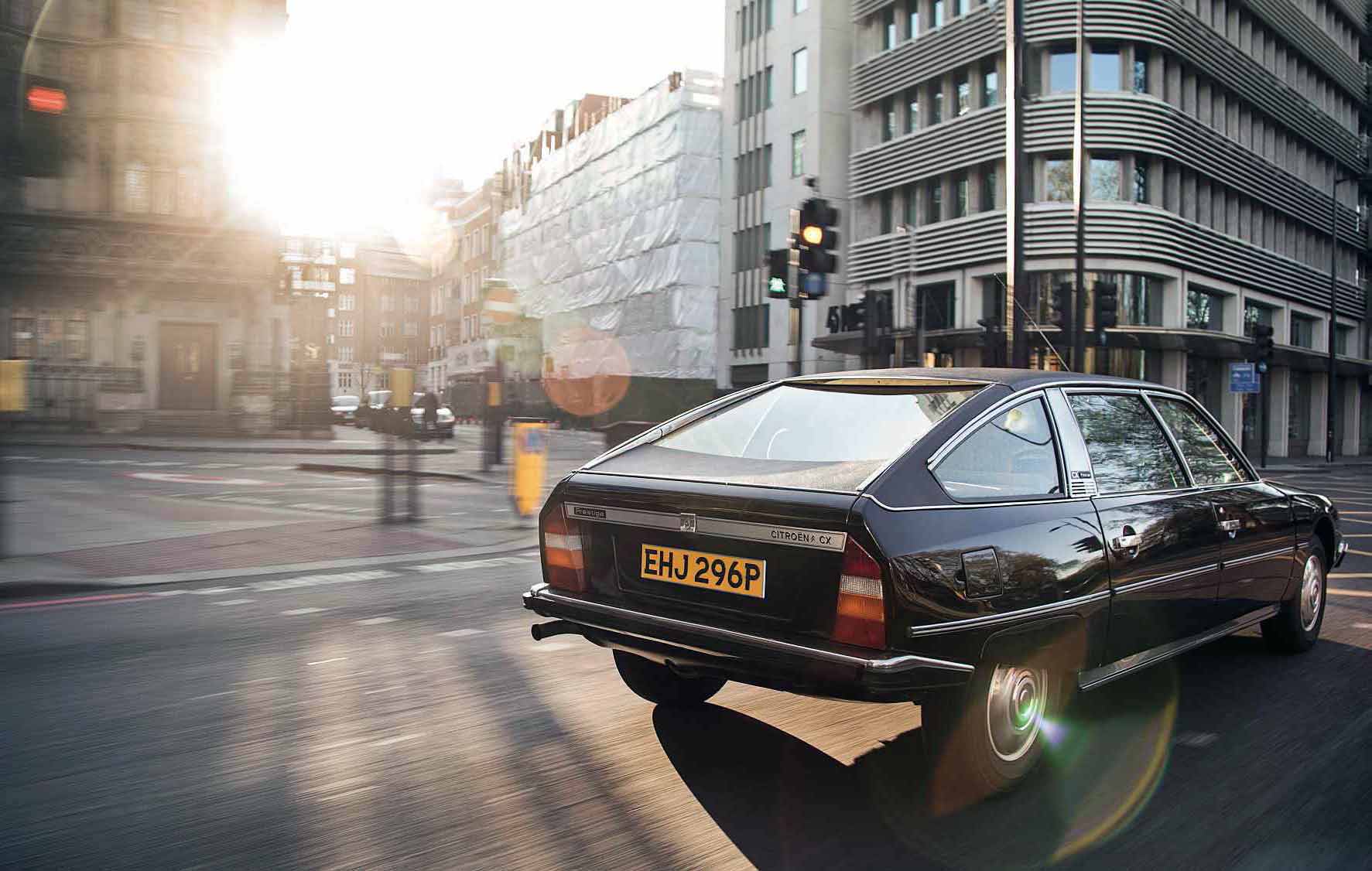 Mechanically speaking, of course, the 1974 CX very much followed on from the preceding Citroen DS: a full-size, front-drive, front-engined saloon (but with the engine this time mounted transversely), with hydropneumatic self-levelling suspension, plus powered brakes and steering operated off the same high-pressure hydraulic system. Its bodywork, styled by Citroën’s celebrated Robert Opron, was refined via wind tunnel, and the CX name referenced the French equivalent of Cd, the notation for ‘coefficient of drag’ in relation to aerodynamic design. As a bonus, the CX also inherited speed- and lock-sensitive variable-assist steering technology from the superlative Citroen SM.

Even the base model was an impressive piece of machinery: spacious, comfortable and strikingly elegant. It won European Car of the Year on its debut, charmed the executive market, especially in upscale Pallas trim, and found homes with more than one lofty crowned head. But, straight from the off, Citroën had bigger plans – literally. In 1975, reportedly after complaints from President Valéry Giscard d’Estaing that accommodations were rather snug in the presidential fleet’s new CX saloons (he was, after all, a lanky six-foot-two), the marque contracted coachbuilder Heuliez, south-west of Le Mans, to create something better suited to the demands of national service.

Heuliez then did with CXs exactly what you’d expect: sliced them in half, added ten inches of wheelbase and stitched them back together. The resulting chassis would carry the CX Brake – aka ‘estate’ in English, or ‘station wagon’ in American-English – as well as Heuliez’s usual ambulance and hearse portfolio. But the real takeaway was naturally the marque-leading, super-premium CX Prestige. Into the lengthened package went every lux option in the Citroën catalogue, and a few more besides, such as rear electric windows, cigar lighters and footrests, while legroom in the back was greater than that of anything remotely resembling a conventional saloon.

The President was apparently well pleased (despite also running a politically expedient Peugeot 604 limo), and the Prestige soon became his voiture of choice. Some 4000 would eventually be purchased for duties of domestic administration and diplomacy abroad, and they were utilised enthusiastically. Jacques Chirac, another sixfooter, famously crossed Paris in triumph on his election night in his personal CX Prestige, and kept Élysée Palace examples in service long after production ended in 1989.

About four times that number, furthermore, would go to the CEO and celeb segment, and to various foreign politicians, not all of which greatly complemented the product image. Erich Honecker, East German leader from 1971 until the Berlin Wall came down, was a serious CX fan, owning several variations including a pair of Prestiges he had hideously stretched yet further in honour of a visit by François Mitterrand. Which, alas, didn’t happen until Erich was out when the wall came down. Elena Ceaușescu, wife of repressive Romanian strongman Nicolae, was another happy Prestige owner, right up to the day testy former subjects sent her to the firing squad.

Veteran Citroënist Michael Quinlan, though, sourced his Prestige from more conventional circumstances: ‘I got it from a Paris auction five years ago; it was just such a ridiculously low price that I bought it sight-unseen,’ and indeed, he mentions a figure unworthy of a decent used Clio. ‘There wasn’t a lot of history included, but it must have been a French Government car: it’s in their typical “muted black over fawn interior” colours, with their favourite cloth seats – they didn’t like leather because it made trousers shiny on the way to meetings.’

He continues: ‘It’s a very early Series One – carb and chrome bumper, and without the roof bump Citroën added about nine months into production for more rear headroom [another President VGE requirement]. With only 30,000km, all the car needed was a good respray, a bit of recommissioning – handled by BL Autos – and recovering the vinyl roof; Heuliez used those to hide the weld seam from the cut-and-shut treatment.’

The ritzier environs of central London are surely a reasonable approximation of the car’s natural habitat. On the broadest, quietest avenues around the Albert Hall, I take a turn at the wheel. Rest assured, it truly is a genuine Citroën of the old school, with clairvoyant brakes and go-kart steering. Meanwhile, the legendary ride quality is made even more impervious to bomb-crater roads – if that’s possible – by the longer wheelbase.

Low-speed acceleration is surprisingly good, too, considering the meagre four-cylinder horsepower, which was always an old-school Citroën problem. However, Michael says the grunt is largely thanks to low gearing, and correspondingly everything’s pretty well done by 80- 85mph. There’s likely also a psychological effect involved, as the cavernous interior makes it feel as though you’re pedalling a hulking great thing really quickly, when in reality it’s barely an inch longer than an Citroen SM.

Never mind; it’s all part of the entertainment experience, as are the vertically installed radio, characteristic rotating-drum speedo and revcounter, and the 17 – count ’em – warning lamps strewn across the instrument cluster. No comparable big ruling-class Merc from the period ever had seats to match this, either, front or rear: like a feather mattress for your hind quarters, except without the sneezes.

But the Citroën loyalists are right, in their way; the entertainment was doomed before the Prestige ever rolled a wheel. Citroën forged unwise partnerships, lost fortunes on an unsuccessful rotary-engine programme that could have cured its horsepower woes, suffered tremendously from the 1973 energy crisis, and finally entered into a shotgun wedding with rival Peugeot in 1974, just as the CX started coming off the assembly line. The marque would build some fine cars thereafter; clever, innovative ones too. Somehow, though, an important part of the Citroen DS and Citroen CX magic was diminished, and continued fading until the loss in 2012 of the delightful Citroen C6 seemed to snuff it out completely. That was the last of the big, capable, elegant Citroëns, made for drivers who think. Now, I’m horribly afraid, every new Citroën is rather less unlike every other car. And we are all worse off for that. 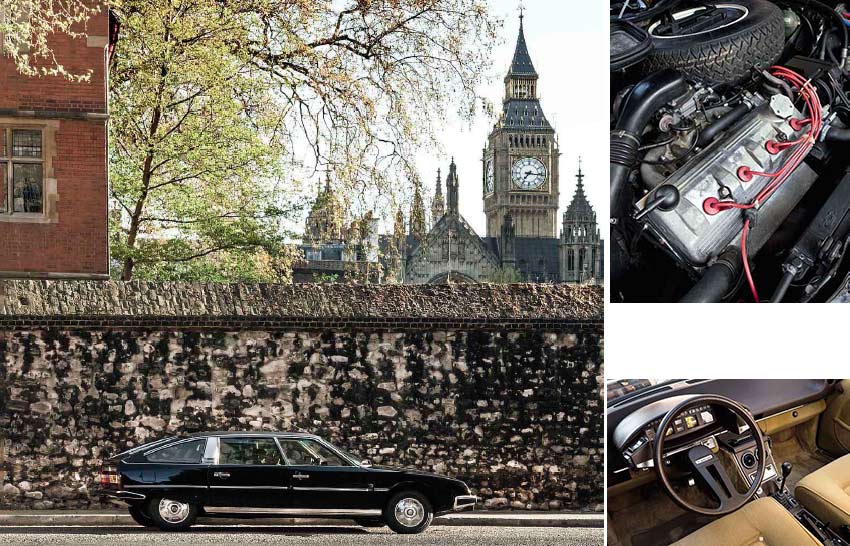 Right, below and far right Four-cylinder engine and four-speed manual gearbox? Non-comformist luxury manifests itself in space and comfort rather than pace.