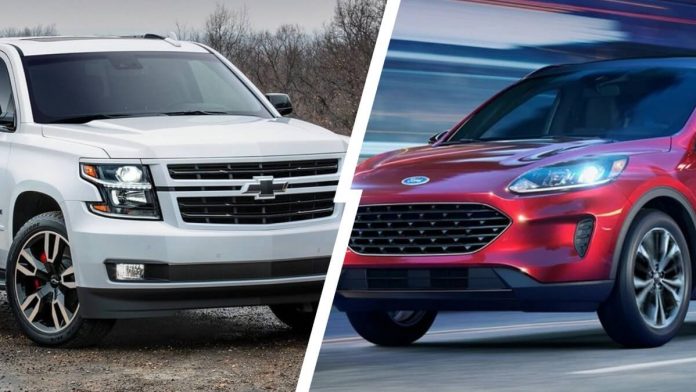 Crossovers and SUVs are the most outstanding and most extensive types of vehicles in the automotive industry. Even though sedans and hatchbacks are perfect, most individuals would choose an SUV or a crossover every time.

If you ask a car fanatic what kind of car they like to drive, most of them will say they’d rather drive an SUV or a crossover any day of the week.

So it makes sense that SUV sales have been going up at a rate that has never been seen before in the last few years.

What Is A Sport Utility Vehicle (SUV)?

The majority of SUVs feature a “body on frame” architecture, which indicates that the body and frame are constructed separately and then assembled.

There are many definitions of what “SUV” stands for because it’s a powerful car with all the sturdy parts you need to move it over rough terrain. But the name doesn’t say much about the vehicle itself.

SUVs, however, may refer to both SUVs and crossovers. SUVs had significant strength and could go longer off-road due to their four-wheel-drive systems.

Professionally, they favored pickup trucks because they rode high, had spacious interiors, and raised seats.

It was believed that the first SUVs were developed from the more robust and useful light-wheeled military vehicles used to transport troops through tough terrain.

In America and Asia, SUVs did not become one of the most popular forms of the automobile until the 1990s. For families, SUVs have gone a considerable distance from being pricey vehicles to becoming more ubiquitous and less expensive.

A crossover is an automobile that combines the features of a filled sedan with a compact SUV. It seems to be a multi-purpose minivan. Crossovers resemble tiny SUVs, but they’re based on a road car and feature a single-piece body.

In contrast to SUVs, the exterior and chassis of crossover vehicles are manufactured as one piece. The best feature of the uni design is that it is substantially smaller, which means it uses less gasoline and is more maneuverable.

Crossovers are excellent family vehicles since they include all of the features of an SUV. The word “crossover” was coined just over a decade ago to define a superior option to a packed SUV. The phrase has evolved into something more practical.

In terms of comfort of use and capability, they outperform older SUVs. SUVs used to be popular due to their size and elevated seating position.

People felt comfortable in these large vehicles, though they were heavy and difficult to maneuver. This is where crossovers come into play.

They have elements of both fuel-efficient hatchbacks (or sedans) and tough off-road SUVs, making them nearly like tiny SUVs. To avoid the challenges that SUVs face, automakers have begun to produce crossovers that are simpler to drive and comfortable enough for long journeys while still being fuel-efficient.

From SUVs intended to endure to cars built for speed, crossovers have come a long way. They’ve evolved into the ideal family vehicle.

SUV vs. Crossover: What’s The Difference?

SUVs and crossovers are both excellent vehicles. They are reliable cars that will get the job done, whether you use them to travel, take your kids to evening activities, or drive to and from work every day.

The compact crossover is an excellent choice for saving money on gas and driving in comfort. The name “crossover” came from the fact that the car was a combination of car features (like ease of use, fuel efficiency, and comfort) and SUV features (like space and utility).

With this in mind, crossovers are easy to drive, comfortable, and good on gas. They also cost less than SUVs. Both kinds of cars have great features, but they are different.

How SUVs and Crossovers Work

Even though SUV and crossover are often utilized as synonyms in the auto industry, there is a slight difference. SUVs usually have four-wheel drive and outstanding off-road capabilities to be operated on rough terrain and in bad weather.

Crossovers are small SUVs that have the attributes of a full-size SUV and the ease of a sedan.

At first view, there is no discernible difference between any of them. Despite the fact that crossovers are technically SUVs, the majority of crossovers do not have four-wheel drive.

How an SUV and a Crossover are built

SUVs and crossovers are almost the same in how convenient they are and how well they drive, but SUVs are heavier-duty and have a more rugged design.

SUVs have a “body on frame” design, which means that the body and structure are made separately and then put together.

On the other hand, a crossover usually has a “unibody” design, which indicates that the body and frame are made as one piece.

Purpose of SUV and a Crossover

SUVs are heavy-duty vehicles that are very good off-road and have excellent handling. An SUV is almost any vehicle with all-wheel drive and higher ground clearance.

Even in the worst weather, it is made to go over rough terrain. Crossovers are made to be more beneficial to be the perfect family car.

SUVs and crossovers are often used together, but they are not the same in how they drive and how convenient they are.

SUVs are usually heavy-duty vehicles with outstanding off-road capabilities that are made to be driven over rough terrain in harsh conditions.

In addition, don’t forget to have a look at Toyota’s new 2022 Yaris-based hybrid crossover.