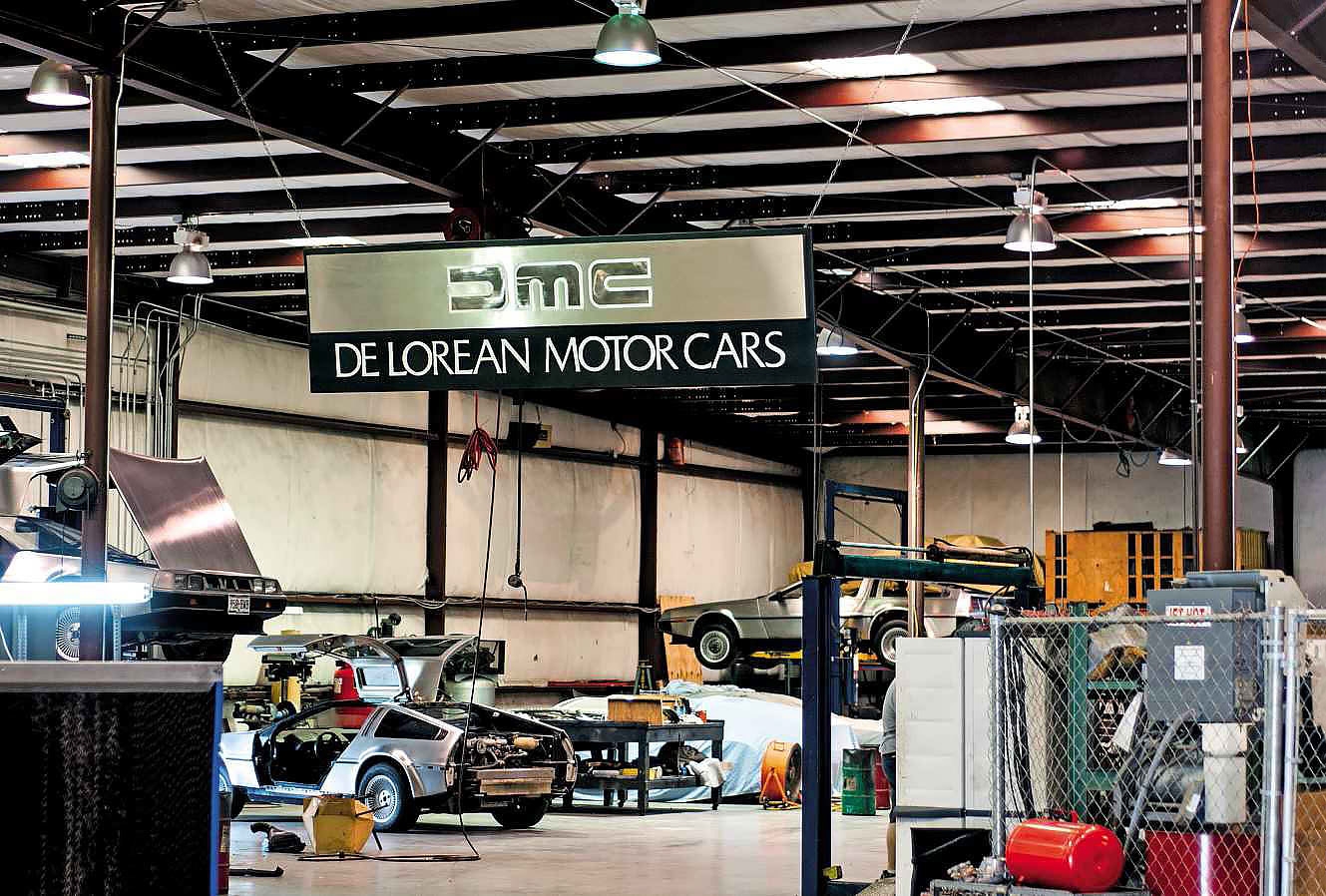 Back to the Future 2. In Texas, the DeLorean Motor Company lives again. And that means you might soon be able to buy a new DMC-12. Words Richard Bremner.

‘I’ve wanted to do it since day one,’ says Stephen Wynne, the CEO of the DeLorean Motor Company (Texas), and the man behind the planned return of this stainless steel coupé to production. ‘Day one’ for Wynne came in 1995, when he bought the reserve of ex-factory DeLorean spares from a company called Kapac. Not long afterwards, he was able to buy the rights to the name.

Wynne is a Liverpudlian now living in Houston, where DMC (Texas) is based. He emigrated to California in 1981 and set up a business repairing British and French cars. Before long he began seeing a car combining contributions from both countries in the shape of the DeLorean DMC-12. Since 1995 his business has been providing spares for the 6000-plus remaining DeLoreans.

So vast is the spares collection, today neatly arranged in the very racks, bins and pallets that supplied the Belfast plant’s assembly lines, that he has long nursed the idea of putting the DMC-12 back into low-volume production, to ‘finish the development of a car that was a bit rushed, and make it the way it should have been made’. He stresses: ‘I don’t mean any disrespect to the original team. They did a fabulous job. We’re just adding the finishing touches.’

In fact, Wynne has previously attempted to return the DeLorean to production, announcing plans as long ago as 2007, since when a small refurbishment and updating programme produced a handful of cars. That led to the company being sued by John DeLorean’s widow for the theft of the name and trademarks, but the case was settled out of court last year to allow for their future use.

This has not been the only legal obstacle, a more fundamental one being that, until recently, every new car sold in the US, regardless of numbers produced, has had to comply with the same crash, emissions and use regulations applied to Chevrolets, Fords, Hondas…

That’s changing with the introduction of the low-volume rule within the Motor Vehicle Safety Act, which applies to models made in quantities of fewer than 5000 worldwide. ‘You’re entitled to produce 325 examples annually of a car produced over 25 years ago, but it does have to comply with the current model-year emissions standards,’ says Wynne. The Department of Transportation and National Highway Traffic Safety Administration is expected to finalise the rules this year, clearing the way for a new DeLorean to enter production in 2017.

Wynne is currently hunting out a new engine that meets today’s emission regulations, standards far higher than the DeLorean’s Peugeot-Renault-Volvo V6 could realistically pass. ‘It’s going quite well,’ he says of this quest. ‘We can’t say much because of non-disclosure agreements, but there are two domestic [US] manufacturers and two offshore who are interested.’ DMC is also investigating the idea of retrofitting this engine to existing DeLoreans, which have never been noted for their searing performance. Whatever it is, that new engine will bolt to ‘our own transaxle, but we’re not sure if we’ll offer both the manual and the automatic’.

Despite this change and many others, Wynne says that ‘visually it will be exactly as you know it – that’s what the law says, and it’s what we’re about’. But there will be alterations, of course, not least a far more sophisticated engine management system. ‘The electrics will get a complete redo,’ says Wynne, ‘as will the suspension and braking. More horsepower means bigger brakes. We’re also trying not to add weight, and even to reduce it.’

Aiding the weight-saving mission is the need to replace the parts missing from a DeLorean’s 2800-odd component count. According to the company’s vice-president James Espey ‘there are about 300-350 parts to re-source’, some of which could be lightened. Many are small, but among the missing are a couple of key components, including the front left wing – and the glassfibre underbody that is the car’s structural heart. That sounds like a game-stopper, yet DMC has the means to make it. ‘We have the only surviving set of moulds and tools, which we’ve produced samples from in the past couple of years. They’ve been refurbished, and will soon be sent to our supplier in Ohio,’ he says.

The missing wing issue has not yet been solved, but there are three US suppliers in the frame. ‘It’s not the black art that it was 30-40 years ago,’ says Espey. ‘We have a full set of drawings, we’ve had a wing 3D-scanned, and we’re doing the final surfacing data now.’ Tooling is the pricey part, of which Wynne says ‘it’s a big number, but not a frightening number’.

One way in which this new DeLorean will look a little different is in the wheel and tyre department. ‘We need bigger wheels because we’ll have bigger brakes, and they don’t sell decent tyres of the right size any more,’ explains Wynne. So the new DeLorean will get 17in or 18in rims, although the tyres’ circumference won’t change. Wynne has been sounding out UK component suppliers, and a consultancy for chassis development, for which he has chosen Coventry University’s ‘world class’ automotive engineering department.

If you’re a DeLorean owner and are wondering whether this project will hoover up most of the remaining spares, fear not. ‘A nice by-product of this project is that there’s a better range of spares,’ says Wynne, of once-exhausted parts that are soon to be reinstated. Of the existing spares, Wynne explains that ‘we’re only doing 300 cars – the supply will not be depleted’. When you consider that the Belfast factory had the capacity to build at least 20,000 cars a year, you begin to understand the scale of the spares supply at DMC’s disposal. Espey says that the company will be open for deposits in April. ‘We’re finalising the amount. It’ll be a non-transferable deposit to prevent speculation, and it’s refundable until one or two months before the car’s build.’ Expressions of interest – several rather strong – should take them well into the second year of production. ‘Some people are extremely upset that they can’t give us money!’ says Wynne.

No doubt these would-be buyers are competing for one of the first 12 cars, which will have lightly updated interiors in black or grey, just as the originals did. For the subsequent batches of 50 ‘we’ll consider more options and variations’, says Wynne. ‘Each year we’ll do a series of 50, and each will be slightly different.’ If compliance can be achieved, DMC plans to sell in Britain, too. ‘We’ve had quite a few enquiries, including for right-hand drive.’

Wynne’s efforts do not quite amount to the rebirth of the DeLorean Motor Company as first conceived, but this venture should see the re-emergence of a fabled car against a backdrop of a very healthy spares supply for the surviving originals. And that has to be the next best thing.

‘Visually it will be exactly as you know it – that’s what the law says, and it’s what we’re about’

Right The world’s largest stock of DeLorean spare parts is housed in the original racking from the Dunmurry factory.

Above DMC (Texas) has been restoring DeLoreans and providing spares since 1995 – it’s hoped production of an updated version will begin in 2017, with a new engine to replace the old PRV V6.