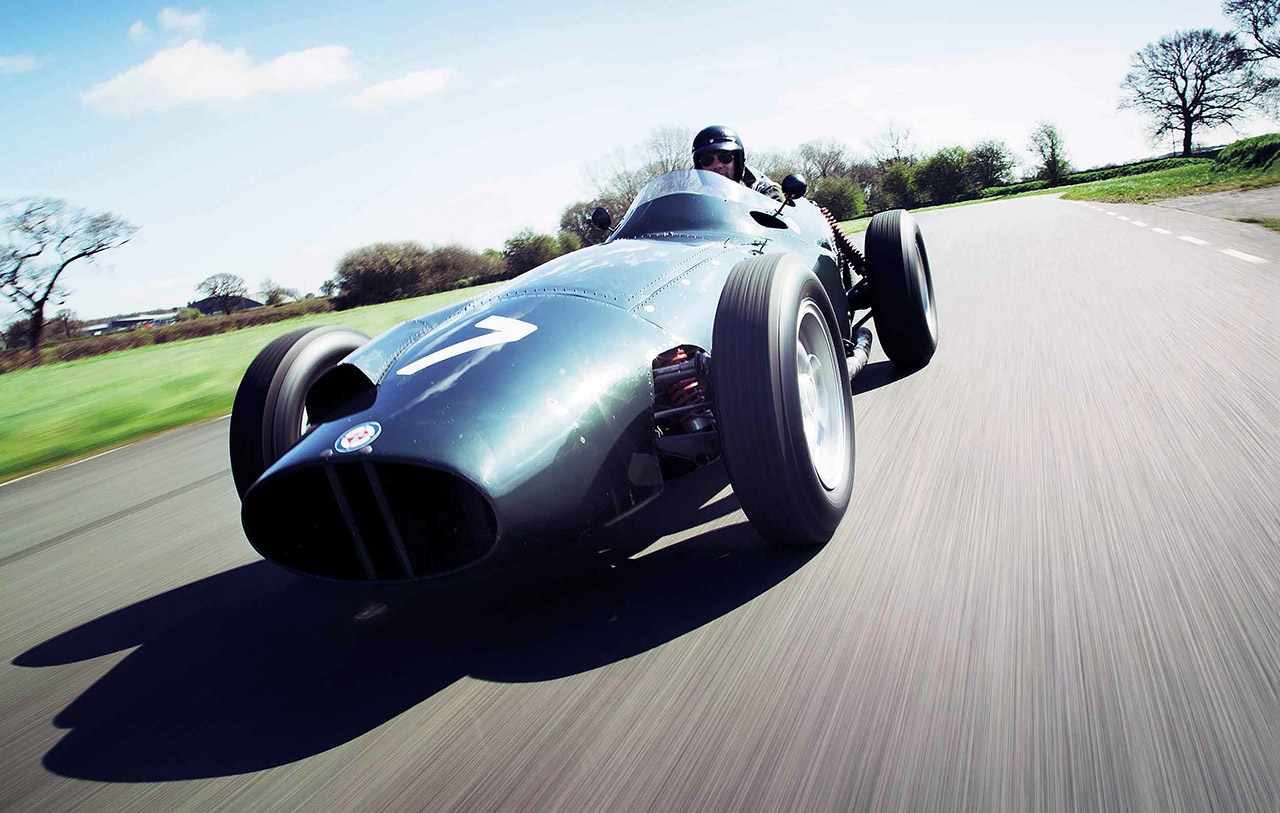 The Tony Rudd/Stuart Tressillian-designed BRM Type 25 stands ready. I plant my left foot on the tall 650×15 rear Dunlop and drop the other, somewhat ungraciously, down onto the red cloth seat. Supporting myself on the bodywork, I slide my bulbous frame into the cockpit, legs akimbo around the transmission. My left foot lands nicely on the clutch pedal, while my right plants itself onto the drilled brake pedal. Wriggling around to get comfy, I note with satisfaction that, when I keep the ball of my foot on the brake, my heel seems perfectly placed for the throttle.

But this is not just any historic BRM, this is chassis no 256, in which Jo Bonnier clinched BRM’s first Grand Prix victory, on 31 May 1959, and became the first Swede to win a Grand Prix in the process. It’s the car in which Moss set the first 100mph lap of Goodwood, clocking 1min 26.4sec while testing. I have to pinch myself. 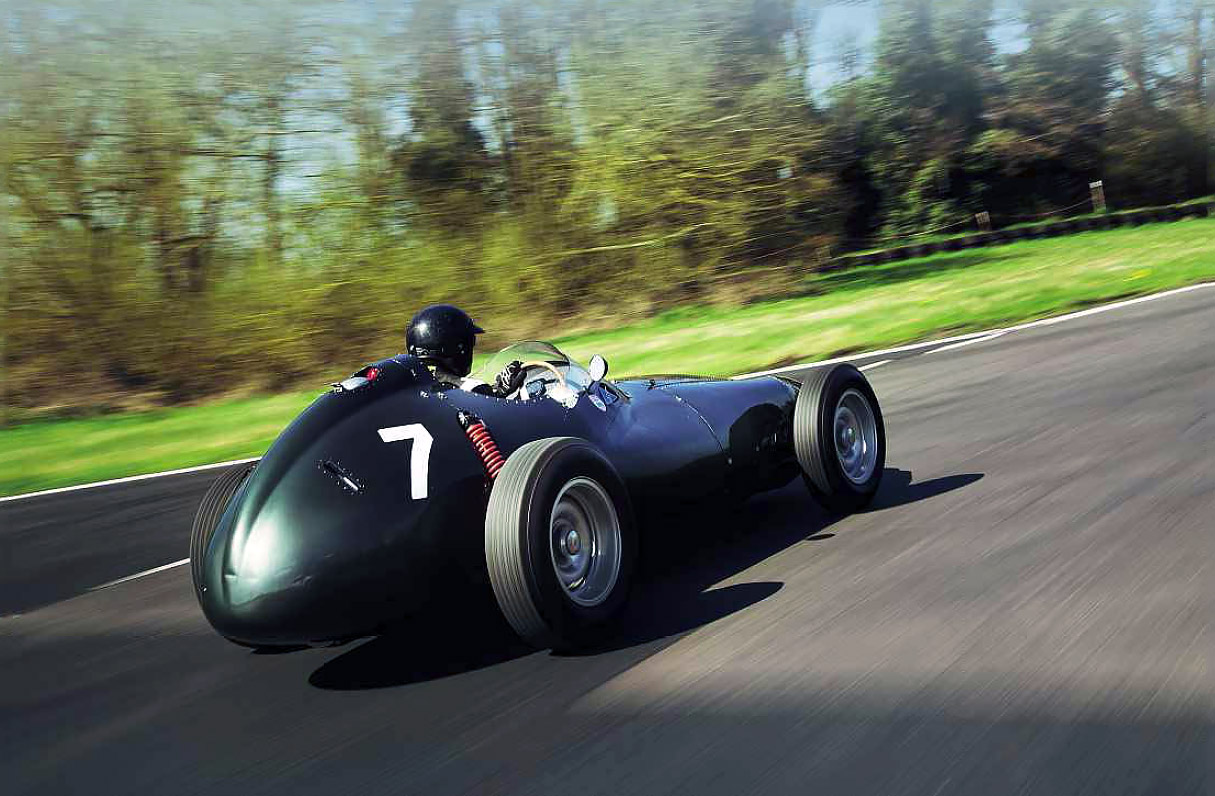 It’s 57 years since Jo Bonnier wrote a monthly column in the Swedish motor magazine Teknikensvarld, produced by the Bonnier family publishing business. Following the BRM’s disappointing performance at Aintree and Monaco, Bonnier had written that he was disappointed at having agreed to drive for the team for 1959. But as he’d signed a contract, money had changed hands and so that was that. All this, however, was before Zandvoort…

I look around and try to memorise where everything is. In period, the car had no self-starter but was push-started. Today it’s owned and raced by Gary Pearson of Pearsons Engineering and is therefore fully equipped with modern racing essentials. So there is a plumbed-in fire extinguisher system, a rain light, a fuel pressure gauge, and a master switch for the battery, self-starter and electric fuel pump. 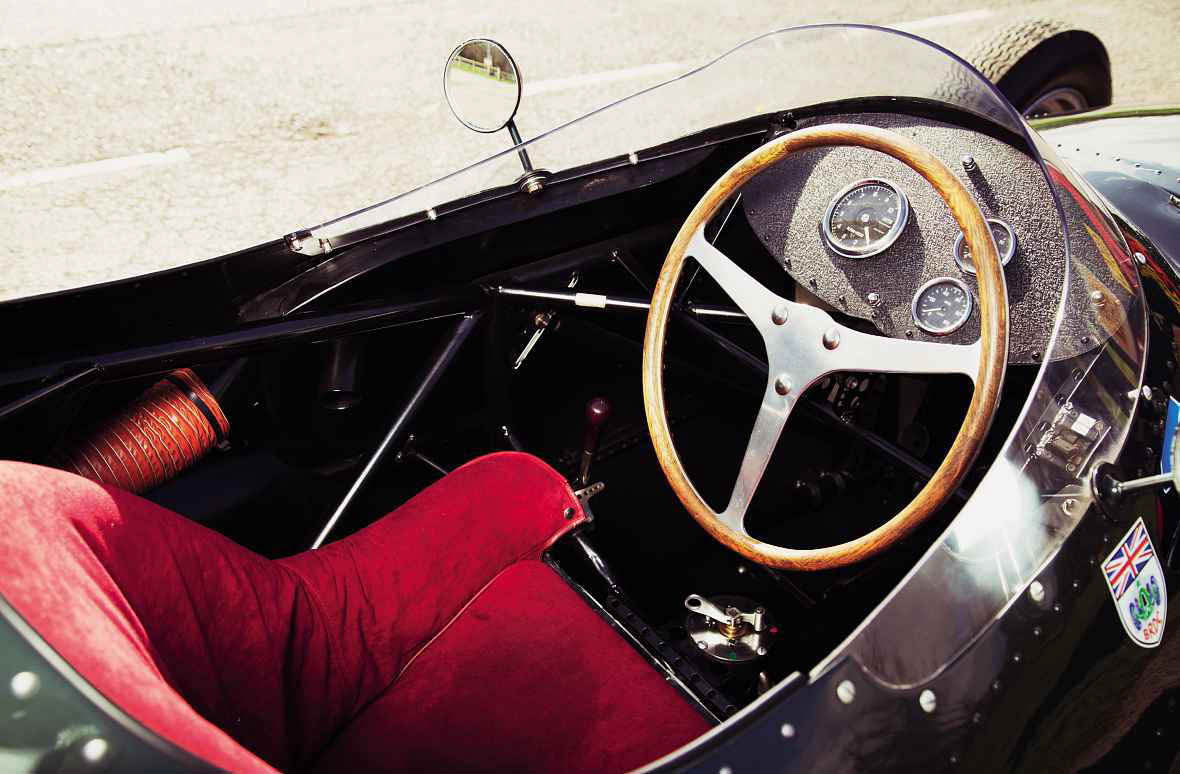 Gary has checked the car over and already warmed the 2497cc twin-cam four. I switch on the pump, listen for the hum, prod the throttle a couple of times to prime the two 58 DCOC Weber sidedraughts and hit the button. Thor blasts off next to my left ear as the engine explodes into raucous life. I check the chromium fuel cock on the floor, controlling flow from the highmounted tank in the tail. It can only be left on when she’s fired up, or the carbs will flood.

I think of Bonnier. It’s 31 May 1959 at Zandvoort. He’s there on the first row with Brabham and Moss. Dunlop estimated his tyres would last 45 laps at full pelt; he had more than 75 to race. Question: drive hard and change tyres, or go careful and make them last? He decides on the latter.

There’s hardly any flywheel inertia, so I concentrate on keeping the revs up while pulling my balaclava up round my jaw and getting my goggles in place. Running temp is supposed to be about 70-80ºC, oil pressure 80 to 90psi; both look fine. There are four forward speeds and no reverse; the gearlever is mounted on the left and it slides forward into first with a clack. I increase the pressure on the throttle, carefully release the clutch – and stall it. Bugger! 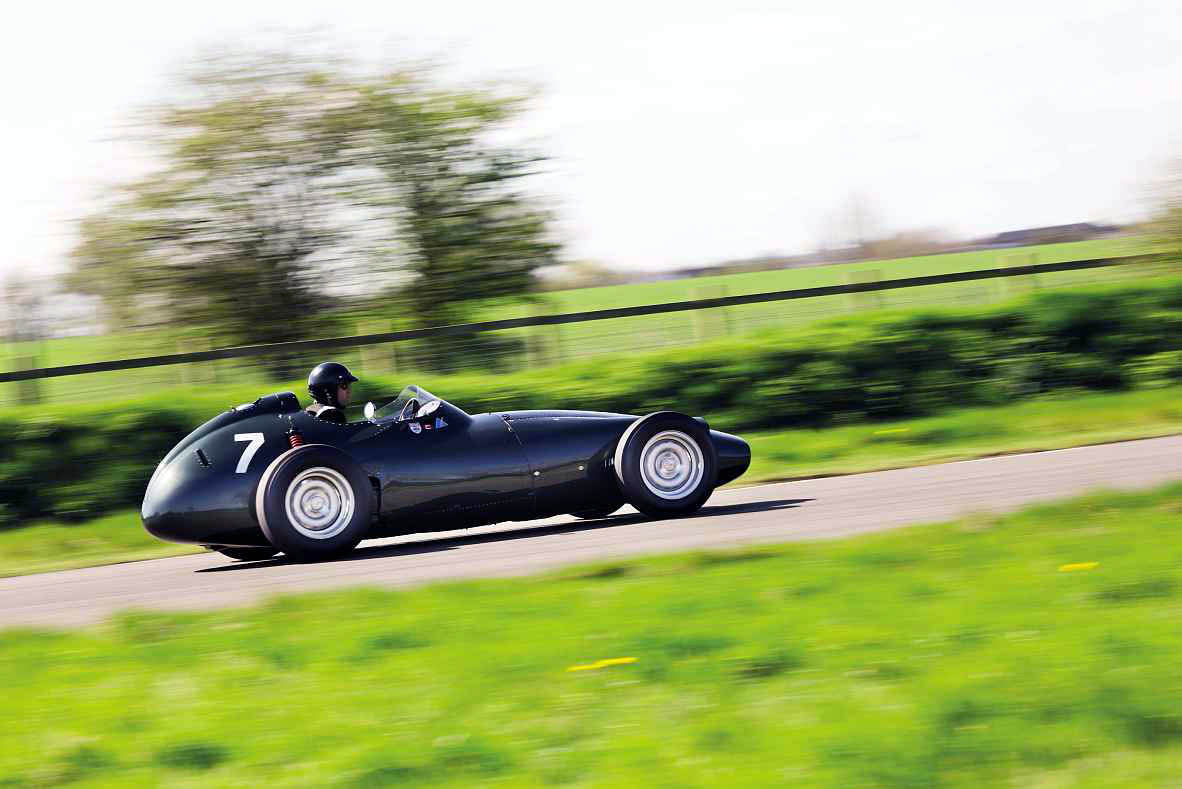 I sit there momentarily, listening to the sound of silence, and then Gary comes over to me. ‘Told you. You’ve got to give it some and get it away or it’ll do that every time. There’s absolutely no flywheel. But don’t feel bad. It did it with me at Goodwood.’ I feel better, though still a twit.

The flag drops, Bonnier tries to avoid too much wheelspin, gets away well and he’s out in front at Tarzan, the first corner. A couple of corners later he clocks Masten Gregory in his tow and thinks to himself: ‘Masten was on the fourth row so must have had a great start. But where are Moss and Brooks?’

This time, remembering the pedal has very little travel, I drop the clutch, light up the rears and she’s away. Great. Gary’s asked me to keep it down to 6000rpm, so at four thou’ I grab second and head off towards the first left-hander. I take it slow and careful into the right that follows and stay in second. Purely out of habit, I glance into those mirrors that Bonnier looked into. But there’s no Moss, no Brooks, no Brabham.

Gently, getting the feel of the car, I come out of the right-hander before the straight, accelerate to 5000rpm, select third and accelerate again. At the end of the straight there’s a long right-hander followed by a very tight hairpin. I brake hard at the end of the turn and the BRM’s discs bite well. Brake balance feels just right, with the single rear disc giving no signal that it is in any way stressed by working alone.

My right heel nudges the throttle and I snick the lever back into second. The pedals could not be placed better for heel-and-toe; the gearbox is simply a delight to use, sharp and precise. The BRM is the most marvellous drive, with instant responses, but the hairpin is tighter than I expected and, having quite a lot of overlap on the cams, at low revs the engine doesn’t know what is expected from it. Double-declutching again, I drop it into first and get it back on-cam, exiting.

Bonnier reasons that, if he eases off a tad, his tyres just might last the race, so he lets Gregory past to make the running. But Brabham is catching him, so he retakes Gregory and sets a new lap record in the process at 1min 37.2sec. Brabham then overtakes Gregory and is slowly catching the BRM, while Behra’s Ferrari, Moss’s Cooper and Harry Schell’s BRM are next in the pack.

I’m beginning to feel at home now. The woodrim steering wheel is slightly angled, but once under way you stop noticing it; the steering itself is taut and precise with plenty of feedback through the wheel. I move up to second at four-and- a-half, then accelerate firmly. Between 4000 and 5000rpm, with the exhaust bellowing like a banshee, you can really feel the engine start to work. This time I keep it up there till six; it feels and sounds terrific, and clearly wants more, but I remember Gary’s instructions and ease off.

Suddenly on lap 26, Shelby’s Aston engine lets go. As Bonnier hits Shelby’s oil, the BRM tries its best to get away from him. But he keeps his foot in, slides about 50 metres over the grass and then manages to get it back onto the black stuff. While being overcautious around that oil, Brabham catches him by surprise and nips by. Bonnier stays tucked in behind the Cooper- Climax, glued to Brabham for four laps and then gets by to retake the lead on the inside of the hairpin.

The BRM Type 25 is very forgiving and, unless you abuse it, there’s loads to spare before it finally lets go. The suspension is extremely well sorted and the Dunlop Historic rubber gives a surprising amount of grip. Braking early before tight corners, then hitting the gas to provoke the tail gently, results in the most satisfying power slides.

The BRM’s handling characteristics are wonderfully neutral, drifting under power through corners, with mild oversteer on the exit – just the perfect set-up. The spaceframe chassis feels solid, not lively like a Maserati 250F’s, for example. There is less roll and superior torsional rigidity, resulting in calmer cornering dynamics.

With 20 laps to go, Bonnier still has plenty of rubber but the BRM has begun to vibrate badly. With Moss now five seconds behind, the vibration gets so bad that he consciously keeps his mouth open to stop his teeth chattering uncontrollably. On lap 60, Jo slows to save the car and reluctantly lets Moss past. But a couple of laps later Moss’s gearbox packs up and he waves Bonnier past. Bonnier wrote later in Teknikensvarld: ‘I held the car in top as much as possible to save it, those last five laps were the longest laps I have ever driven and, even after the flag fell, I could hardly believe what had happened. It was just so great.’

I pull off the circuit, trickle into the paddock, cut the engine and roll to a stop. Then I climb out and stand there, staring at this amazingly beautiful racing car. The BRM Type 25 was late in arrival and required considerable development, but it did eventually become highly competitive. Although it was soon eclipsed by the midengined Cooper in period, this important BRM is highly successful today in the hands of Gary Pearson. With its characteristic long air-scoop, that four-branch exhaust manifold resembling a sculpture, and that single rear brake disc protruding into the airflow below, chassis 256 is exactly as it was in May 1959 – an elegant silhouette of handcrafted magnesium magic.

Our Curborough Sprint Course location is really too short to stretch a BRM Grand Prix car capable of almost 180mph, yet it provides a taste of what Bonnier achieved nearly six decades ago. Being able to enjoy testing it here and now is simply an honour.

‘With the exhaust bellowing like a banshee, you really feel the engine start to work’

Clockwise from above left Four-branch manifold exits into a side-mounted exhaust pipe; 2.5-litre twin-cam four produces 250bhp; under that bulbous tail, a single central disc brake acts on the transmission. 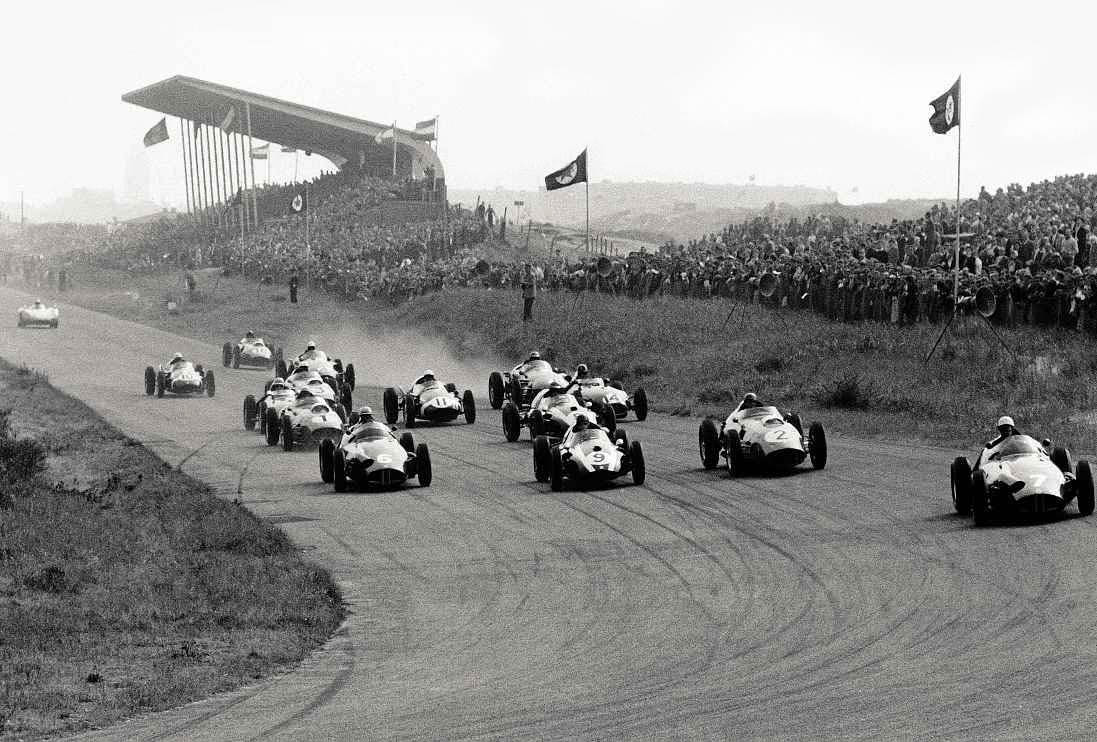 Below and right At Zandvoort for the 1959 Dutch Grand Prix: Jo Bonnier (in this car) leads Harry Schell in the other works BRM P25; stark cockpit in which Bonnier steadily drove to victory; characteristically elegant P25 profile.