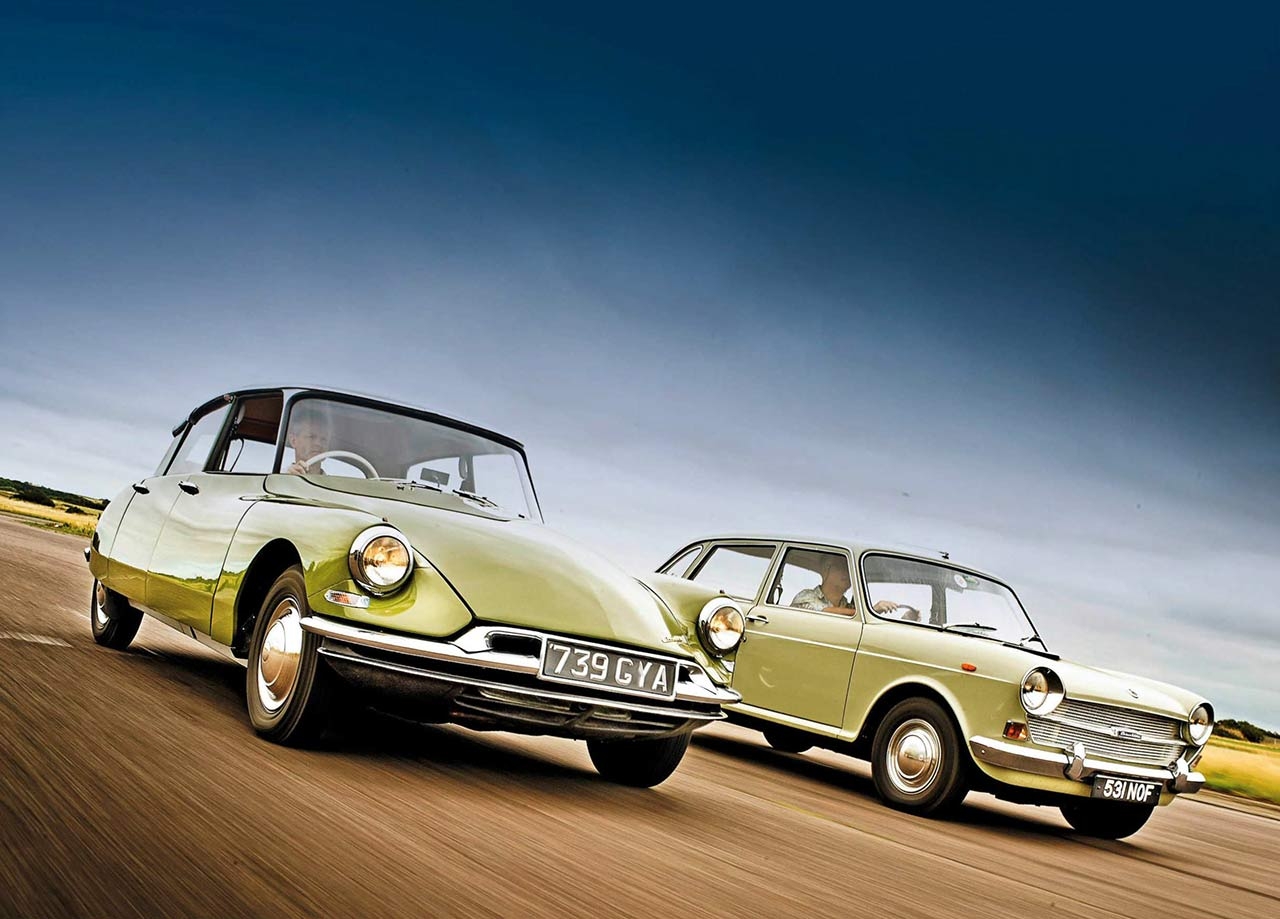 Austin Landcrab vs. Citroën ID19. They may look like they’re miles apart, but the Landcrab and ID19 have more in common than just a distinctive carapace. Words Andrew Roberts. Photos Gus Gregory.  Pincer Movement In a lime-tinged twist on the The Princess and the frog, we introduce goddess to crustacean – the Citroën ID19 and the Austin 1800 Landcrab.

This may seem a bizarre pairing of two cars with radically different images, but the comparison is an entirely relevant one. Both the Citroën ID19 and the Austin 1800 ‘Landcrab’ are front-wheel-drive five-seaters powered by fairly large four-cylinder engines – and although the ID would have cost nearly 100% more than the Austin 52 years ago, it was probably its only real rival in terms of what it offered to the motorist of that era. Both aimed to provide transport in a new Britain of motorways, concrete shopping precincts and motels with strangely orange decors. Undoubtedly, to see the cars parked side by side is to be reminded of the Landcrab’s unusual dimensions – and the ID certainly looks more imposing than the 1800. Don’t presume that this is going to be a one-sided contest, however. After all, the Austin was the favourite design of Alec Issigonis, who believed it was ‘way out ahead of them all’ – and he drove a Citroën DS, from which the ID was developed.

I approach our 1964 Austin 1800 test car with vague memories of the early Landcrab being a vehicle with an awkward driving position and very heavy steering, but 531 NOF comes as a surprise. The low-geared rack and pinion set-up would make the 1800 a fairly challenging town car, and on sharp bends it’s necessary to perform much B-film car-chase-style spinning of the thin-rimmed wheel. However, on the open road the steering lightens so much it’s startling – and here the Austin displays its considerable virtues, with little sideways roll and the Hydrolastic suspension coping well with the surface of a little-used runway.

The gearchange is no hardship to operate and, in the context of 1964-vintage motoring, the all-synchromesh transmission, with its very positive clutch, is far easier to use than the dreadful four-on-the-column as fitted to the Ford Zephyr 6 MkIII. And in terms of roadholding and general road manners, the 1800 is a world apart from the likes of the Vauxhall PB Velox. My drive in the Austin 1800 makes me appreciate just why it was awarded Car of the Year in 1965. There was certainly scope for improvement – power-assisted steering should have been an option from the outset rather than from 1967, and reclining front seat backrests should have been standardised. Replacing the inaccessible under dashboard handbrake with a floor-mounted lever would also have been a grand idea, along with planning a facia with a notion of ergonomics. But in all the Landcrab feels like a scaled-up BMC 1100 and is just as enjoyable to drive – high praise indeed. The De Luxe versions had leather trimmed seats (although this didn’t prevent the interior having the ambience of a government office waiting room) and the Austin is a true masterpiece of packaging, offering more room inside than a six-cylinder ‘Big Farina’ despite being shorter than the Austin A60 Cambridge. The 1800’s hull is incredibly strong, as Alec Issigonis desired a subframe-free car – and its structural integrity could be equalled by few rivals.

The Landcrab project was commenced in 1958 as a future replacement for the Austin Cambridge/Morris Oxford Farina range. However, it was subsequently decided to it the expanded 1.8-litre engine that was developed for the MGB and to market the 1800 as a wholly separate model, which was an extremely risky sales decision, as figures from 1960 show that a mere five per cent of new car registrations were in the 1700cc-1800cc sector.

By 1965 BMC was faced with very slow sales of the A60/Oxford VI, and the 1800 suffering from reliability issues, while Austin dealers were faced with the additional challenge of the Landcrab’s appearance. Our test car is a pre-production model that took part in the launch and as such is probably the finest example of the breed au naturelle on the road today. From my 2017 perspective, the 1800’s lines now seem less austere and more of a prime example of minimalism, a theme that recurs throughout the car.

The ID was introduced at the end of 1956 as a stripped-spec version of the DS – a manual four-speed gearchange and no power assistance for the steering, clutch or brakes. Our 1960 test car was assembled in Slough because, between 1923 and 1965, the Berkshire plant assembled Citroëns for the British, Empire and subsequently Commonwealth markets. UK-built examples of the DS and ID had their running gear, body panels and suspension imported from France, but with domestic manufacturers supplying other components. Board of Trade regulations stated that at least 51% of a car’s construction had to be locally sourced if the vehicle was to avoid severe import duties.

The Slough-built IDs featured a vertical front numberplate holder, a 12-volt electrical system (French models would not be so-equipped until 1960), reversing lamps and DS wheel trims. Inside, an ID manufactured in France was a riot of plastics and other artificial materials, but UK models offered seats upholstered in leather and a walnut veneer facia with circular instruments.

These modifications were intended to give the ID additional appeal to a driver who might have otherwise looked at a Wolseley 6/99 or Humber Hawk. In France, the ID was a Citroën aimed at taxi firms and family motorists, but although the Slough-built model outsold the DS. It was still an expensive car, competing in the executive sector of the market.

As with the Austin, the view from the ID’s driver’s seat is magnificent but there is a much greater sense that the occupants’ well-being was seriously considered. The Citroën’s interior instantly appeals to me, for if the 1800’s cabin appears almost wholly functional the Citroën seems genuinely concerned with driver and passenger comfort. No self-respecting ID owner would be expected to adopt the ‘bus driver’ seating position that is familiar to many BMC enthusiasts.

Our Sherwood Green test car further boasts the hide trim and wooden dashboard that Citroën GB deemed as essential in order to appeal to middle-class British motorists but the ‘traditional’ fittings do not so much mask the ID’s sense of individuality as highlight them. This a car that requires a rather greater degree of acclimatisation than your average Sixties large saloon. There is little purpose in hurrying the starting procedure, as the oleo-pneumatic suspension will rise in its own time and on its own terms, and nor is there any use in attempting to rush through the gears. First lacks synchromesh, so the best method is to take your time; the Citroën is rather high geared and, after getting used to the ways and means of the column-mounted lever, the conclusion is that it’s probably a good idea to regard fourth as a form of overdrive and use third as much as possible.

The clutch is easy to use and the ID has the additional bonus of a brake pedal instead of the rubber ‘mushroom’ that can prove so disconcerting to novice DS drivers. There is also a conventional handbrake that is only marginally easier to operate than the 1800’s. When travelling at low speeds, the ID feels a good deal heavier than the 1800 – but its cornering is equally sure-footed, albeit more dramatically entertaining as it sways around bends. Bumps in the airfield are ignored with disdain as the Citroën gives the impression of floating above the tarmac. Above all, there is a greater sense of refinement about the Citroën, for although the clatter of the engine note may betray the power unit’s pre-war origins, there is none of the 1800’s transmission whine.

Both the Austin and the Citroën are the products of a sense of vision, but if the ID is a design where idiosyncratic logic and aesthetics seamlessly combine for the driver’s benefit, the 1800 is more uncompromisingly individualistic. Both ceased production in 1975, the DS range leaving behind an indelible legacy while the Landcrab is too often remembered with such phrases as ‘the customers had to undertake the development themselves’ or, sadder still, ‘it might have been a great car.’ Fifty-two years after its debut, it is easier to see how the 1800 epitomises the strengths and weaknesses of the British Motor Corporation in the Sixties.

My own view is that the Austin 1800 was built by the wrong company – one with an often scant appreciation of marketing or reliability issues. By 1967 CAR magazine was rhetorically asking ‘how long BMC can allow the 1800’s shortcomings to prevent it from realising a truly tremendous potential is something for them to decide,’ as the corporation already had a reputation for under-developing brilliant concepts. If a Wolseley-badged 1800 (with power steering and more comfortable interior) had been considered from the outset, the Landcrab’s status as an alternative to the Rover and Triumph 2000 would have been established. With better management at Longbridge and improved quality control the Austin might never have been the ‘British DS’, but it would have been better recalled as a great car in its own right.

The Austin’s 1798cc four was borrowed from the MGB. Landcrab’s interior represents minimalism rather than austerity. Oil filters were another notable absence from the equipment list of early IDs. Slough-built IDs boasted leather, walnut and a distinct absence of the DS’s brake ‘mushroom’. Landcrab trails the ID in terms of mystique, but when it comes to the driving experience it’s a close-run thing.

Michael Sanchez has owned his pre-production Austin 1800 MkI for 12-13 years. ‘Its first owner was Arthur White of the BMC development department; he bought it in July 1964, three months before the official launch. I think the 1800 is still underrated – think how unusual a big saloon with a transverse engine would have been and, unlike the Mini and the 1100, there was no subframe. It feels very surefooted and corners beautifully. Parts are easy to come by, apart from the front wings, and it is still a practical and cheap car to run.’

Paul Stevens’ 1960 ID was bought new by his father. ‘I gained custody of it two or three years ago. You have to work the gears quite hard; I’ve become expert at double de-clutching from second to first. The best aspect is the ride quality; it cruises at 70mph. Regular oil changes are vital because there is no filter on an ID this early, and suspension fluid needs changing every two years. Lucas electrics and parts shared with the French cars can be sourced; interiors of Slough-built cars cannot.’