The 1950s was a tough decade for BMW. The post-war period left it with a Munich plant that had been ravaged by the war, while its Eisenach facility was now located in East Germany. And its line-up of cars just didn’t reflect what was needed in cashstrapped Germany – the big 501/2/3 range of saloons and coupés might have been technically impressive, but their design was rather old-hat, and they were far too expensive to ever be big sellers. 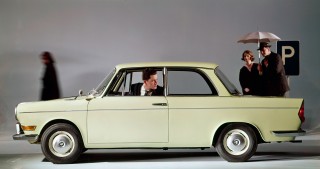 It was BMW’s motorcycle division that was keeping the company afloat and, in an attempt to utilise this technology, a new prototype small car was penned in the style of the pre-war 327, but utilising the company’s successful flat-twin 600cc ‘bike engine. But it was shelved because BMW didn’t have the money to develop it and, instead, the company put its resources into developing the Isetta bubble car.

However, by the time the Isetta arrived, BMW had, to a certain extent, missed the boat – the burgeoning German middle classes were now looking at bigger cars than the Isetta – but BMW had nothing to offer.

Cue the arrival of the 600 – effectively a larger, four-seater version of the Isetta. It was a good idea at the time, as it was relatively cheap to develop, but it retained the Isetta’s door-at-the-front design, and buyers weren’t especially keen. BMW’s designers knew the company needed a model with more conventional styling, so they set about making it happen. New front and rear suspension assemblies were designed but, for cost reasons, the 600’s flat-twin, two-cylinder engine was retained – with a capacity increase to 700cc – as was the 600’s four-speed, manual transmission. 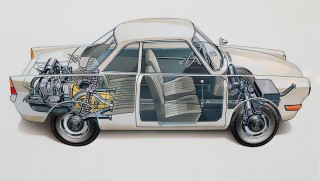 In the second half of the 1950s, BMW had been looking for design proposals for a small saloon and, in 1958, BMW’s importer in Vienna presented a concept he had worked on in collaboration with Michelotti. This was mildly reworked by BMW’s head designer, Wilhelm Hofmeister, to produce both saloon and coupé body styles of the 700, with seating for four. But the highlight of this new design was its use of a monocoque body – a first for BMW – and, while there were concerns that this was moving away from traditional BMW design, it offered a considerable weight saving as well as lowering the car by 60-70mm. Ultimately, it offered reduced build costs, too.

Overall, the 700 was 3,540mm long and tipped the scales at just over 600kg – impressive for a four-seater machine. There was plenty of space inside for four, and even the coupé version didn’t suffer from a lack of headroom for passengers in the rear.

In fact, the new 700 accounted for some 58% of the company’s overall revenue that year 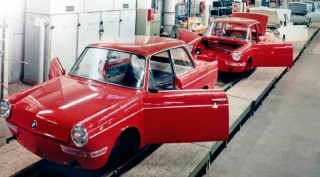 Powering the 700 was a 697cc, twin-cylinder engine that developed a heady 30hp; enough to propel the coupé version to 78mph, accelerate it from 0-90km/h in 20 seconds, and 0-100km/h in less than 30 seconds. While those figures might not seem all that impressive by today’s standards, there was nothing wrong with the 700’s economy figures, returning an average of around 47mpg. With a 30-litre fuel tank capacity, the 700 could manage over 300 miles per tankful, which made it a practical proposition, too.

Instead of waiting until the Frankfurt motor show to reveal their latest baby, the BMW board took the unusual step of revealing the car to around 100 journalists in June 1959 and, the moment sales director, Helmut Werner Bönsch, unveiled the car, the assembled throng of hacks burst into spontaneous applause. BMW’s top brass were able to breathe again – when the 600 had been similarly exhibited to the press two years earlier, it had earned a far frostier reception.

Both the 700 coupé and saloon were presented at the Frankfurt Motor Show, and received very positive receptions from the public. The coupé was the more expensive of the pairing at 5,300DM, while the less well-equipped saloon was significantly cheaper at 4,760DM. While there was obviously a family resemblance between the two cars, the saloon was the far more practical model and, despite weighing slightly more than the coupé (640kg), the saloon offered virtually identical performance.

The 700 was a direct competitor to the VW Beetle and, while the ‘people’s car’ was initially the cheaper offering, there was no shortage of buyers for BMW’s new baby. Indeed, as a result of great demand, customers had to wait several months for the delivery of their cars, with BMW selling more than 35,000 examples in 1960. In fact, the new 700 accounted for some 58% of the company’s overall revenue that year. 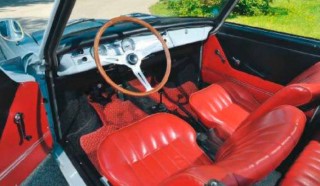 Journalists were impressed with the 700 when they drove it, with Auto Motor und Sport commenting: “You have the feeling that you’re sitting in a car with genuine sporting values, but without the rather harsh ride and limited space so typical of most sports cars.” And this was borne out by the achievements of the 700 in motorsport.

With its light weight and an engine that was amenable to light tweaking, the 700 soon gained a reputation for sporting success. As early as 1959, the first coupés had been entered into events such as the Sahara-Lappland Rally. In 1960, BMW’s rapid coupés brought home silverware, most notably in the hands of Hans Stuck (senior), who clinched the German Hill- Climb Championship at the wheel of a 700, at the ripe old age of 60. Keen to capitalise on these sporting achievements, BMW quickly announced the 700 Sport, which it launched to the press at the Nürburgring in the summer of 1961.

The Sport featured a tweaked version of the 697cc engine, with a 9:1 compression ratio, a higher-lift cam and twin Solex carbs. It was good for 40hp, which represented an impressive a 25% power hike. Top speed was up to 85mph, while 0-62mph (0-100km/h) was achieved in under 20 seconds. There was also an optional sports gearbox, stiffer suspension and an anti-roll bar, and all for the princely sum of 550DM more than the standard coupé.

THE ONE TO BEAT!

The BMW 700 Coupe Sport quickly became the machine to beat in the lower-capacity classes of motorsport, and put up stiff competition against the class regulars from Steyr-Puch and Abarth. It was an ideal machine for young drivers finding their way in the sport and even the greats like Hans-Joachim Stuck cut his teeth in a 700 at events at the Nürburgring, when he was aged just nine! 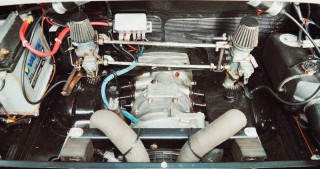 While the 700 Coupé did well in competition, it was the arrival of the RS that helped to secure the 700’s legendary status. It made its debut in 1961, and boasted a tubular spaceframe and an aluminium body, with 70hp coming from the twin-cylinder motor.

The 700 is a rear-engined car. The original 697cc, twin-cylinder engine developed a heady 30hp.

With 100 horsepower per litre being developed from the motorbike unit, it made light work of punting its sub- 600kg body around. Depending on the transmission ratio, this lightweight performer was able to reach a top speed of between 150 and 200km/h (93 and 124mph) – enough for Walter Schneider to bring home the German Circuit Championship in 1961. Over the years, the RS was driven by such BMW luminaries as Hans Stuck, Alexander von Falkenhausen and Hubert Hahne.

The ‘win on Sunday, sell on Monday’ philosophy certainly worked for the 700, and BMW couldn’t add to the range fast enough. Then, in 1961, the company introduced the 700 De Luxe and, while it retained the standard running gear, it offered far greater levels of equipment.

There was even a convertible model that BMW manufactured, with help from long-time soft-top partner, Baur. Based in Stuttgart, Baur reinforced the car’s loadbearing elements, and redesigned the 700’s rear end. While this inevitably added weight, the convertible was equipped with the more powerful Sport engine, to ensure there was no drop-off in performance.

However, the most significant change came in spring 1962, when BMW chose to make the 700 bigger to appeal to an even wider audience. As the company wasn’t yet out of the woods in financial terms, it chose to retain the standard machine’s wheelbase, but extended the body by 32cm to offer a roomier package than before.

But it wasn’t just in Germany that the 700 was successful, as it was popular in many other countries, t. BMW even delivered assembly kits to production plants in countries that had high import duties on fully-assembled vehicles. Hence, the 700 got built from kits in Belgium, Italy, Argentina and even – in small numbers – in Israel.

While it was ultimately Herbert Quandt’s cash injection that saved the company in 1959, the 700 no doubt played its part in convincing him that BMW had a viable future. Had it not been launched that year, he may well have gone along with the sale of BMW to Mercedes, and Germany’s automotive landscape would have looked very different indeed.

As it was, the 700 tided the company over until the launch of the Neue Klasse saloon in 1962, and even the 700’s production techniques proved valuable in making sure that the new, bigger, saloon was a success. The 700 might have been a small package, and perhaps a relatively unknown one today but, without it, we wouldn’t have had the successful BMW dynasty that followed.

BMW 700 LS De Luxe models rolling down the production line during the early 1960s. Minimalistic instrumentation in the four-seat BMW 700. The 700 coupé boasts a top speed of 78mph, and could accelerate to 60mph in just under 30 seconds.

Of the 190,000 700s built, only 2,592 were convertibles. The fuel tank is located under the luggage compartment at the front of the car. There’s room under the bonnet for a standardsized spare wheel, too.

Above: There was plenty of space inside the 700 for four, and even the coupé version didn’t suffer from a lack of headroom for rear-seat passengers.

Right: The BMW 700 was a surprisingly influential car. This is an LS De Luxe model, which was launched in 1962 and was 32cm longer.