Cadillac: on a roll 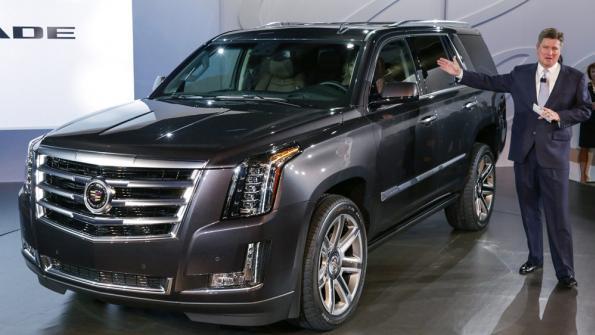 Detroit confidential. Our man in Detroit, Martin Port, looks at what’s hot and what’s not coming out of Detroit today… Cadillac: on a roll. It wasn’t long ago that many in North America had a tough time taking Cadillac seriously as a major competitor against the likes of BMW, Audi and Mercedes-Benz.

Today however, there’s no question that General Motors luxury brand is once again close to becoming the ‘Standard of the World’. Its current range of products has been critically acclaimed, while the brand itself has received notable awards, including been named a 2014 ‘Customer Champion’ by J D Power and Associates, the third year in a row it has received this distinction.

In terms of product, the big news in recent years has been the introduction of its ATS, a BMW 3-Series F30 fighter that won North American Car of the Year for 2013.

Riding on a 109.3in wheelbase, the sedan is offered with a choice of 2.5 litre four-cylinder, 2.0 litre turbocharged four and 3.6 litre V-6 engines.

A wide track, low-centre of gravity, 50/50 weight distribution and optimized four-wheel braking system, combined with a relatively low curb weight (approximately 3300lb) make this one of the most dynamic cars in the segment – a far cry from the days when Cadillacs weren’t known for their handling prowess.

For the 2015 model year, the ATS sedan has been joined by a coupe derivative, which boasts unique sheetmetal and slightly more powerful 2.0 litre turbo four (the V6 is the only optional engine in the coupe).

Other big waves have been the introduction of Cadillac’s first extended range electric vehicles (the ELR), which uses a 16.5 kWh lithium ion battery pack and electric motor to drive the front wheels. A 1.4-litre Ecotec four-cylinder petrol engine serves as a generator, which Cadillac says can boost the ELR’s total driving range up to a total of 340 miles.

At present, the ELR, introduced for 2014, is the only model in Cadillac’s lineup that’s exclusively available as a two-door coupe.

Also introduced for the 2014 model year, was Cadillac’s third generation CTS sedan. Edgier looking than its predecessor, the new CTS is lower, wider and also lighter – in fact it weighs about 200lb less than a comparable BMW 5-Series F10 (who’d have thought we’d see the day when American luxury cars weighed less than their European counterparts?).

Offered in rear and all-wheel drive versions, the CTS is offered with either a 2.0 litre turbo four cylinder engine, a 3.6 litre normally aspirated V6 or a twin-turbo 3.6 litre V6 rated at 420bhp. Transmission choices comprise a six-speed and eight-speed automatic (the latter offered on rear-drive models only). The CTS coupe, wagon and high- performance V derivatives continue to be based on the old second- generation car for the time being.

The other big news of course is the 2015 Escalade/ESV. Since it was introduced, Cadillac’s monster sport utility 2015 Cadillac Escalade carved out a reputation as highly desirable, particularly among the ‘bling bling’ set and was seen as largely responsible for making the brand ‘hip’ once again.

For 2015 the Escalade has been redesigned with sharper, more distinctive sheetmetal, a more upmarket (and roomier) interior, new 6.2 litre V8 engine rated at 420bhp; stronger, fully-boxed frame and recalibrated suspension with Magnetic Ride Control real time damping. This is designed to optimize the vehicle’s body motion control depending on road conditions in real time, resulting in improved dynamic capability.

Other features include full exterior LED lighting (both front and back) and a 12.3in digital information display in the instrument cluster that’s paired with Cadillac’s CUE (Cadillac User Experience) info- entertainment system.