With production averaging almost 1000 cars every 12 months for 20 years, just as with the Shadow there is now a surfeit of Silver Spirits and Spurs on the market. That means these fabulously built cars, hugely expensive when new, can now be had for astonishingly low prices – and some are still in very fine condition.

Rolls-Royce maintained its phenomenal reputation by evolving rather than changing its products, so the Spirit and Spur used the Shadow platform virtually unmodified. The coachwork was wider, lower, more aerodynamic and the same length in Spirit form; its engine was tweaked with higher compression and improved intake and exhaust; it had revised semi-trailing-arm rear suspension from the two-door Shadow; and in Spur form it was 4in longer, all of which was used to increase rear-seat space. There were numerous extended editions of the Silver Spur, including 159 stretched Limousines, 104 Touring Limousines, 49 Park Ward Limousines and one Armoured Limousine. In addition, Hooper coach-built 17 cars and uprated 24 more.

All fittings and finishes were of the highest quality: the walnut-veneered dash should match from side to side (as a mirror image). Velour was a rare option for the seats – almost all are leather and, again, detail quality was of the highest order. Powered everything was still rare in 1980, including fore-aft, up-down and tilt for the seats, though reclining was still manually operated at first. Digital displays for outside temperature and journey elapsed time were a sign of modernity, but check that everything still works.

All the guides say ‘buy the best car you can afford’, but Rolls-Royce parts are extremely expensive (though suppliers of used spares help) so, rather than blowing all your funds on the purchase, keep a decent budget aside for unexpected outlays. Buy a sound car with a great recent history, showing it’s had a fair amount of use and has been cherished and looked after. Don’t worry about dull paint or a grubby interior (it’ll polish/clean up); do worry about corrosion, damaged/missing trim and neglected servicing.

The size of your motor shed is an important consideration. This is not a car to be kept outside long-term and many garages are only 17ft long – you’ll need 4in more for the Spirit and 8in for the Spur, ideally with a bit extra to avoid scrapes.

ENGINE The V8 is strong, but if neglected will suffer from the effects of dirty oil and corrosion

SUSPENSION Check for leaks from steering, dampers and self-levelling – more likely to fail on little-used cars than those driven frequently

INTERIOR Damaged and peeling woodwork, cracked or faded leather and damp carpets are signs of neglect: try to find a better car

Facelifted Spur II features body-coloured bumpers among other refinements. Spirit design was finalised in 1973, but updates kept the shape going until 2000.

The Silver Spirit and Silver Spur have a commanding presence on the road, and imbue you with a wonderful feeling of relaxed superiority and graciousness to other road users when behind the wheel. Unfortunately not all other road users respond as graciously, but cocooned in such splendid surroundings, who cares?

Properly maintained, the all-aluminium V8 engine is good for 500,000 miles: check the service history and look for a clean and cared-for engine bay. Stuck hydraulic tappets and worn cams result from missed servicing – listen for a rattly top end. Lack of corrosion inhibitor will lead to overheating and engine damage.

Make sure the air-con works as it should, because it’s costly to put right. Regular regassing lubricates the pump, so check the service history for it High-quality, long-lasting leather should only require occasional feeding (velour was rare and more fragile). Check carpets for damp Two brake calipers on separate circuits means double trouble if neglected. Electronic dampers are very costly to replace: listen for clonks when driving Damaged or missing trim can be hard to find and pricey, though secondhand supply from specialists such as Flying Spares is good for standard parts.

Rare Mulliner Park Ward is one of several desirable special editions – expect to pay significantly more than for a ‘standard’ Silver Spur to land one.

Early cars with carburettors are the cheapest, but are more thirsty, less powerful and a little less reliable than fuel-injected cars from 1987 (though a blocked injector will make a later car run roughly). The only part that is affordable to rebuild is the GM gearbox (check all gears engage before driving off) – the engine, brakes and most other components are complex and costly. Given the size and quality of the parts, however, the prices make sense – these cars are seriously built to last, and if they’re properly maintained they are extremely durable. DIY is not impossible if you’re reasonably competent, but specialist servicing is not cheap. 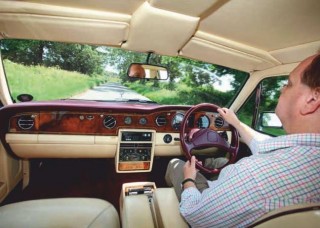 Cast-iron wet liners in an all-aluminium engine, plus hydraulic tappets, give strength and smooth running – until servicing schedules are neglected. Check that service history, especially the past few years, listen for any unseemly noises, and look out for signs of overheating (or worse, emulsion in the oil-filler cap or oil in the coolant, pointing towards head-gasket failure).

Turn on the ignition and check that the two hydraulic warning lights appear; if not, pump the brake pedal a few times until they do. If they don’t, be very suspicious. Now start the engine: both should go out within 30 secs cold, 20 secs when warm. Once it’s warmed up, stop the engine, turn on the ignition again and pump the brake pedal until they illuminate – you should get at least 40 pumps. If anything’s untoward, budget for a costly hydraulic-system overhaul.

“I found it on a secondhand car lot in Nottingham, they didn’t know what they had,” says Robin Sherwood of his rare Mulliner Park Ward edition Spur. “My father had Shadows and I always wanted one, but when this came up I had to have it. The Spirits and Spurs look better now than they did when new, and are fantastic value – they are so beautifully built.

“It was bought by a London gem dealer as a gift for his wife and had full history: Jack Barclay from new, then the R-R main agent in Spain, then Hillier Hill. It’s done 23,000 miles and I’m only the second owner. The MPW comes with a Champagne cooler, American flame walnut, stainless-steel trims and a humidor. The most important advice is to make sure it’s been looked after – even with this I’ve had to invest in a full hydraulic overhaul.”

“The Spirits and Spurs look better now than they did when new, and are fantastic value – they are so beautifully built”

Bespoke, complex and more expensive new than a Spur, with outrageous styling. Hugely costly to own, it’s fabulous but makes little sense, and is still undervalued.

Giugiaro-designed big saloon with V8 power, handbuilt to high standards but lacking the presence of a Royce.

+ For Better than average

-Against Air-con; some wear/chips to veneer

An early Spirit isn’t this budget outlet’s usual fare but it has good history, with 19 stamps in the book and every MoT, confirming the mileage. With the previous owner from 2000, it has only done 300 miles since 2013, and the most recent (home) service was in November 2017.

Body-wise it’s pretty good: the rear arches feel fine and have had some attention (though they are starting to bubble again on one lip) and it’s had sundry paint. There’s a little surface rust under the sill edges but no serious corrosion, and there are no cracks around the rear window. The tyres are old Michelins to the rear, with newer front Grabbers, and the exhaust is fair to good.

Inside, the leather is only lightly creased and the veneers are fairly good, save the usual flaking under the ignition switch, plus one or two nicks in the door caps. The motor is tidy, with coolant clear and orange at ‘min’, oil mid-brown near ‘max’, and sweet-smelling transmission fluid. It sits level, starts easily and drives nicely, with smooth gearchanges, sharp brakes and no clonks. The oil-pressure and temperature gauges read where they should, plus the interior electrics work. The air-con doesn’t, though the seller will have it regassed. It’s sold with an MoT until June.

Bumpers are undamaged, wheel trims only lightly dinged Radiator and starter were replaced 8000 miles ago, in 2003 The headlining, carpets and dashboard top are all decent.

The Spirit and Spur are the ultimate development of the Silver Shadow family and make magnificent machines to own and drive. There are more than enough great examples to go around, so don’t make a rod for your own back by buying a rough one unless it has very significant redeeming features. Buy a really good Silver Spirit or Spur and look after it: you won’t regret it.

FOR + Fantastic value for money, these cars offer the ultimate in quality, refinement and also durability, provided they have been properly looked after

AGAINST – Fuel consumption prohibits daily use; it won’t fit in most garages, so lots have sat outside and suffered