It’s hard not to mention drifting when talking about the 200SX. The sport gained international popularity in the early 2000s when this turbocharged, rear-wheel-drive coupé was cheap and easy to modify. Drifting success is one of the reasons why Nissan’s 200SX gained a cult following in the UK, and also explains why there are few unmodified cars left. 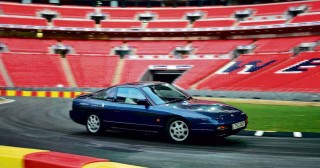 There is, however, a lot more to the 200SX than its ability to go sideways. Impressive performance, reliability and smart looks made it one of Japan’s many early-90s market disruptors, Nissan embracing rear-wheel drive in an incredibly well-balanced machine.

Launched in Japan as the 180SX, the three-door liftback coupé was sister car to the two-door Silvia, both sharing the S13 chassis designation. Differences include more traditional coupé styling for the Silvia and pop-up headlights for the 180SX. To add to the confusion, the liftback S13 had a different name in each market: 180SX in Japan, 240SX in the US and 200SX in the UK and Europe.

We got the 167bhp 1.8-litre turbo CA18DET engine, with a five-speed manual or four-speed auto, but, underpinned by MacPherson front suspension and an independent multi-link set-up at the rear, it was still quick and capable. Even if it lacked the sexy styling of the Italians or prestige of the Germans, the 200SX offered buyers something different.

Euro-spec cars were also generally better-equipped, with many optional NISMO parts fitted as standard to cope with the extra cooling requirements of sustained high-speed driving. A facelift arrived in 1992, with smoother-looking bumpers and different wheels. Production of the European S13 stopped in late 1993, although the fastback continued in Japan until 1998 – receiving a further facelift and update in ’1995.

That wasn’t the end for the 200SX, however. For 1995 Nissan launched the S14 Silvia in Japan, a car that then came to Europe as the 200SX. The two-door coupé was slightly longer, wider and lower, while handling was improved and, although it weighed more, it was more upmarket. To make the most of its 197bhp output from the new 2.0-litre SR20DET turbo engine, it was given a limited-slip differential. A mild 1996 facelift brought in more modern-looking projector headlamps and tinted rear lights.

There were various mechanical changes, too, including an improved turbocharger. Production finished at the end of 1998, spelling an end for the 200SX in Europe. The Silvia lived on in Japan, with a much-improved S15 model up to 2002. This was not officially imported to the UK, although many made their way here.

Time, abuse and salt have not been kind to the 200SX and few UK-market S13 200SXs remain, pushing up prices for survivors. Finding later S14s is easier, but their numbers are dwindling fast, too. There’s a growing interest in the market for Japanese classics of this era, though, and the 200SX has a cult following. They’re reliable, easy to look after and even quite practical, and there’s a great international community keeping them alive. Find a good one, cherish it and be prepared to have lots of (probably sideways) fun.

Higher-mileage and slightly rougher examples of the S13 start from around £4000, rising to about £8000 for cars in top mechanical and bodily condition. Perfect original cars are out there, but be prepared to spend upwards of £12,000.

The S14 remains slightly cheaper, with solid cars starting from about £3000, rising to about £10k for top examples. The best-preserved cars tend to be low-mileage automatics, which makes manual cars more pricey. Modified examples of either generation can be significantly more.

What to look out for?

Buy a car with a solid shell because rust can be tricky to eradicate. Also inspect carefully for signs of crash damage.

Modifications are common and shouldn’t necessarily be shied away from. Extra power can easily be liberated and, if done sensibly, is nothing to worry about. Steer clear of anything claiming a big power output without documentation of how it was achieved, though.

Check for signs of engine abuse, such as smoke, knocks or taps – it’s strong but has its limitations. Synchros can also take a beating, so make sure all gears engage smoothly.