Buy an MGA the smart way

Arguably the prettiest car to wear MG badges, the MGA is a solid buy in a turbulent market – with our Price Guide values flat year-on-year – and parts availability is better than ever thanks to a raft of active clubs and specialists.

‘Originality can be difficult to come by, but good cars abound and all MGA variants are practical and fun to drive’ 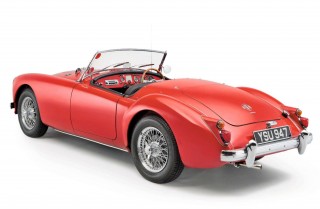 Fewer than 6000 of the 101,082 MGAs built were sold in the UK, with more than 80,000 crossing the Atlantic. Many cars now in the UK were sold new in the US, and converting from left- to right-hand drive is straightforward. There’s no need to hack the bodyshell or chassis about – all that’s needed is a fresh dash along with various other parts, which keeps the cost down to about £800 (DIY) or £2000 if you enlist professionals. This guide pools the knowledge of MG Owners’ Club (mgownersclub.co.uk) tech advisor Roger Parker, William de la Riviere of Beech Hill Garage (beechhillgarage.com) and Russell Storer of MG Mecca (mgmecca.co.uk).

1960: Twin-Cam axed and the 1600 De Luxe arrived, using the Twin-Cam’s chassis with disc brakes all round (now the most prized MGA after the Twin-Cam).

1962: the MGA was replaced by the MGB. Restoring a coupé costs around 30% more than a roadster, but the end result is worth 20-25% less. Rebuilding a project is harder than you might think because the construction is surprisingly complex. Originality can be hard to come by, but good cars abound and all editions are practical and fun to drive.

The sills and A-posts are the areas most likely to rust; all panels are available, but repairs are complicated so expect a specialist to charge at least £2000 per side. Wings also corrode; replacements are available but making them fit is difficult, so you’re better off repairing what’s there, with a typical bill of £750.

Other key rot areas include the door bottoms and boot floor (£500 apiece to repair), while the bonnet, boot lid and doors are aluminium over a steel frame, with a wooden stiffener in the bonnet and boot lid to prevent dents. Electrolytic corrosion is common and the wood rots; if things are really bad you’ll have to replace everything. Door skins cost £200 apiece (allow £600 per side for a professional to fit and paint) while a new bonnet is £1200 and a new boot lid £700 – although these parts aren’t always available new.

Accident damage is common and distorts the body and chassis, wrecking the handling and throwing out panel gaps if the car isn’t repaired using the correct jig. Analyse the flanges and seams where the wings attach to the bodyshell; any rippling suggests a shunt.

Although the chassis is impressively stiff, a hard knock will distort it and it’s tricky (if not impossible) to put things right; a decent replacement from the US for around £1000 is the answer. The key areas to check are the front and rear chassis legs, the former running under the car from the engine bay. Get underneath for a better view of the chassis, focusing on the floorboard supports, which are wooden and tend to rot.

There are two families of engine; the familiar B-Series or a much rarer twin-cam. The B-series can do 250,000 miles if maintained, while a rebuilt unleaded-ready balanced unit costs £2500. The sign of a tired B-series engine is blue exhaust oil smoke; expect 50-60psi at 3000rpm in a healthy unit. This engine was fitted to other BMC cars and it’s easy to swap between 1500/1600/1800cc versions, so ensure the engine number is correct for the car; Anders Clausager’s Original MGA (ISBN 978-1906133177) will help here.

Expect oil leaks; the scroll oil thrower on the back of the crankshaft allows lubricant to seep from the bottom of the bellhousing which wears, along with the block that it acts upon, eroding both. Once worn it’s potentially costly to put things right, because to produce a lasting fix a new block and crankshaft could be needed, and neither is available. However, it’s usually possible to install an oil seal conversion for £250, if the engine has already been dismantled.

Cylinder heads crack, leading to water loss around the top of the engine and overheating. A blown head gasket will follow, so check for white emulsion on the underside of the oil filler cap. Rebuilt cylinder heads cost £360 (exchange) but if the head is cracked you’re into the realms of stitch welding for around £1000.

The Twin Cam engine is expensive to revive. These engines are fragile, require specialist skills to restore and the ancillaries are unique (a B-Series water pump costs £30, but a Twin Cam item is £500). These engines are often rebuilt poorly and they gained a reputation for burning pistons when new, so it’s no wonder a proper overhaul costs upwards of £8000.

The first thing to wear out in the four-speed gearbox is second gear synchromesh, so check for baulking as you go up and down through the ratios. Also listen for chattering in first and reverse, signalling worn laygear.

Exchange gearboxes are £400-£750, if no fresh gears are required. Replacement cogs are available, but many owners go for a close-ratio set for an extra £1000 – an option when the MGA was new; the letters ‘DA’ in the engine’s commission number denote it (although replacement gearboxes are common). Another option is to fit a Ford Type 9 or Mazda five-speed gearbox; kits are available for £2100 or £2500 respectively; add £1000 or so for a specialist to supply and fit.

Differential casings can rust through on cars left standing for years, and damage is caused by hub nuts being left loose; they should be tightened up, but the 161/64in hub nut is an odd size and it has got eight sides. The correct socket is available for about £30. If the nuts aren’t tightened up, the bearing spins against the axle casing, damaging both, leading to the diff leaking oil onto the brakes. Budget £475 for a diff rebuild.

The most likely suspension issue is worn or tight trunnions; they need greasing at least annually. The latter problem occurs when replacement trunnions are fitted but not lapped-in properly; budget £200 per side for a matched trunnion and kingpin. Lever-arm dampers can leak, but it’s possible to top up the reservoir. New front dampers are £155 each, rears £95 apiece; exchange units are £60 and £35 respectively. Cheap rear springs are common, giving the wrong ride height and damaging the ride and handling; decent springs cost at least £120. If 10in springs are fitted up front in place of the correct nine-inch items, the dynamics will also be spoiled.

Steel wheels can crack around the mounting holes; replacement is preferable to repair. A fine alternative is the Dunlop 6×15 replica wheel offered by Realm Engineering; a set of four costs around £1000. Wire wheels can suffer from worn splines and rusty spokes. The braking system is conventional and usually trouble-free, but cheap parts are often fitted, damaging efficiency. Stick with Lockheed or Mintex parts for reassuring stopping power. All-drum braking systems can be convert to discs for around £500.

You can replace any of the interior and exterior trim, but incorrect parts are often fitted, such as MGB seats. It’s usually better to salvage original parts rather than buy new, because the fit is often better, although Mazak components such as the windscreen grab handles and vents on the shroud are tricky to reclaim. Lucas electrics were fitted, with all parts available to revive even the most tired A; instruments, switchgear, lighting and looms can all be replaced. Not all As were sold with a heater, but you can fit one for around £500.

‘My 1969 MGA was reimported to the UK from the USA in 1977, when it was converted to right-hand drive and a Ford Type 9 five-speed gearbox was fitted. It had been rebuilt to a high standard, but it was covered in microblisters.

‘I got the car repainted but then had to remove the engine to fix an oil leak, replace the radiator and fix an array of electrical glitches. I’ve done 5000 miles in the three years I’ve owned it, including two European road trips; usability has been improved with a few upgrades including two 12-volt batteries for stronger electrics, twin 1¾-inch SUs, an air intake to cool the carbs, electronic ignition and a luggage rack for extra carrying capacity. ‘I’ve done everything myself because these cars are so easy and cheap to work on. Just £300-£400 is a realistic annual budget to run a good example, assuming DIY maintenance, and that’s excellent value.’

‘I bought my 1960 MGA coupé in 1970, as everyday transport. It has been ideal for the past 50 years – compared to the roadster there’s more space inside the cabin, it’s more refined, it has wind-up windows and it’s better weatherproofed.

‘I did a DIY rebuild after a few years, then in 2015 invested in a professional rebuild by Yorkshire Restorations. They did a superb job, but the restoration cost much more than the £40,000 the car is valued at. ‘My A is a very reliable, usable car that’s a delight to drive. After its rebuild I took it on a 10-day 2000-mile tour of Scotland and it was an ideal long-distance cruiser.’

‘I’ve recently imported a 1957 coupé from the US, having engaged Little British Sports Cars (littlebritishsportscars.co.uk) to find one for me. It took them two years to find the right car because I wanted a coupé; roadsters are far more common.

‘My car is rust-free and complete, and that latter point is key because the cost of all those little bits of trim quickly adds up. The three-piece rear window costs more than £800 for example – for each section of glass.

‘It’s possible to spend £80,000 on a really superb rebuild, while half that gets you a pretty average job. Having been careful with my choice of project I’m expecting the restoration to be very straightforward.’

Peter McIlvenny of specialist classic car insurer Carole Nash says, ‘With an increase of MGAs on the UK’s roads of approximately 25% in the last ten years, the popularity of these cars isn’t in doubt.

This can be attributed to higher values having made projects financially viable and an influx of cars from the USA, particularly California. You can expect to see some increase in value in the next ten years or so; but this I believe will be at a slower pace than previously, in part because of increased availability. It is worth considering the possibility that, certainly for now, the car has peaked and other MGs such as the Midget or B will provide a better return on your investment over the next ten years.’

Converting a left-hand-drive car to right-hand drive is relatively straightforward. Many reimported MGAs have been adapted.

The relatively complex nature of the MGA’s structure makes major metalwork expensive. Ex-California cars have been returning to the UK for decades and some early imports are now rotten.

The redoubtable BMC B-Series engine is generally more reliable and long-lasting than the Twin Cam unit.

The MGA is a great driver’s car thanks to its sharp rack-and- pinion steering and gearbox, stiff structure and lively performance.