Style, build quality, performance, high-tech equipment, comfort and practicality thanks to a decently-sized boot make the R129 Mercedes-Benz SL an attractive proposition. Buying one requires care, however – neglected cars are not unusual and seemingly small problems can end up costing a lot of money to fix, while some SLs on the market have been for sale for a long time because their sellers haven’t accepted that values have dipped. This guide draws on the expertise of R129 specialists Edward Hall (edward-hall.co.uk), Oliver Stoner of Turnbull & Oliver (usedmercedesbenz-sales.co.uk and prestigecarservice.co.uk) and Charles Ironside (charlesironside.co.uk).

‘Some SLs have been for sale for a long time, because sellers haven’t accepted that values have dipped’ 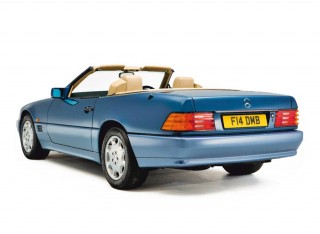 Front inner wings corrode, particularly on later cars, while rust can form under the battery tray on any SL; budget £400 to fix these. Neglected cars can end up only good for breaking once their boot floors, sills, suspension and rear subframes have corroded badly enough, so insist on seeing a prospective purchase from underneath before buying. The bonnet and radiator grille are prone to stone chips, as are the flared wheelarches; a front-end respray is common and a new grille costs £450. Front wings can rust badly, especially where they meet the bumper. Original wings are available; they’re bolted on and fit superbly, costing £300 apiece. Check the plastic bumpers for cracks from parking damage which can sometimes be repaired; otherwise budget £1000-£1200 for a new bumper, fitted and painted.

Check that the electric folding soft top raises and stows smoothly; jump-starting can damage the control module and replacements are £1200. Look for evidence of hydraulic leaks by the sun visors and around the rams in the boot – faults can be hard to fix. Repairs can run to £2500 if everything needs doing, but £300-£500 is more likely; be wary of Japanese imports that have suffered from the hot climate. The plastic windows in the soft-top crack but they can be replaced for £600; an OE-quality replacement roof costs £1200 fitted (companies worth looking at for supplying hoods include cabrio.de, prestigeautotrim.com, carhood.com and sls-hh-shop.de.

An aluminium hard top was standard and there was a wind deflector from 1993. If a pillar base is corroded, budget £300 per side to repair it. The panoramic roof offered from 1995 with a smoked glass panel covering the entire roof is desirable, but much heavier. The seal arrangement changed in September 1995, so hardtops made either side of that date aren’t interchangeable.

These are durable if maintained, but minor oil leaks (usually cheaply and easily fixed) aren’t unusual, especially with the M104 straight-six which can suffer from head gasket failure; budget £1000 to fix this.

The M113 and M119 V8s in the SL500 are long-lived but head gaskets can fail in straight sixes at about 100k miles, a £1500 fix. Check for oil in the coolant reservoir or leaking oil down the sides of the cylinder block. Parts are hard to find for the Bosch KE-Jetronic fuel injection on the early M104 engine (in the 300SL) and it can be hard to make this powerplant run properly.

‘Early SLs (1989-1992) use KE-Jetronic and do not have wiring harness problems,’ says Edward Hall. ‘But cars built between late 1992 to early 1996 often require a replacement top loom, throttle body rewire and lower loom. We get the looms remanufactured and charge £1500 to replace all three on a six- or eight-cylinder car. V12s often need new MAF [Mass Air Flow] looms too, plus two throttle bodies, adding up to over £2000.’

Early M119 V8s can misfire because of moisture building up in the distributor cap, so it’s worth replacing the cap and its seals plus the rotor arm every couple of years. Direct ignition was adopted in 1996 (for the 1997 model year), dispensing with the distributor.

The V12 in the SL600 is superb, but running costs are steep, the dynamics are spoiled by the extra weight and it offers no usable extra performance over the SL500.

A lack of use combined with internal corrosion from infrequent coolant changes can lead to corrosion then failure of the head gasket, a £6k-£8k repair. More likely are oil leaks from the upper timing chain covers (a £600 fix), while engines can be destroyed by loom failure leading to rich running and bore washing. A decent used M120 costs £3k; allow£6k including fitting.

Only a few SLs had manual gearboxes. The vast majority are autos; some early cars got a four-speed unit, others have a hydraulically actuated five-speeder, given away by its E and S switchable modes. This is a reasonably strong gearbox but it can fail, leading to an occasional loss of drive, and when it does it costs £3000-£4000 to fix. The electronically controlled five-speeder fitted from 1996 is much slicker and tougher; it’s given away by the Wand S switchable modes. This transmission (known as the 722.6) can suffer from oil leaks from the electrical connector at the front, and speed sensor plate failure that puts the gearbox into limp mode, but each problem can be fixed for £200-£300. These gearboxes need fluid changes at least every 60,000 miles.

Hard-driven cars can suffer from a worn back axle, so listen for whining. A decent used axle costs £800, with exchange rebuilt items more like double that. Steering, suspension & brakes The most likely steering issue is with tired track rod ends which have inner and outer joints; allow £100 per side to fix things. Drag links wear (£300-£400 to renew) as do steering idlers (£250 to replace) while the steering box can wear but play can normally be adjusted out.

Knocking from the front suspension betrays worn top mounts; replacements cost £250 each, fitted. Front lower ball joints wear (budget £150 per side) while the suspension bushes can perish. Luckily, it’s rare to have to replace all eight at the front and 24 at the back.

Be wary of cars with the electronically controlled ADS (Adaptive Damping System), standard on the SL600 but optional on other models. It transforms the ride but few owners chose it because it was £4000 – which is what it typically costs to fix if it goes wrong. You can convert to standard suspension for around £2000.

All SLs came with hard-wearing leather trim, but electrics can be problematic. A failed xenon light costs £500-£1000 to fix, while repairing a seized wiper motor can cost £700. Air-con condensers and compressors can fail (typical repair bill £1k-£2k) as can early push-button climate-control panels (£500).

Early cars got a single-button key which is reliable but can be replaced for £250. Later cars got a three-button key which is more troublesome and replacements aren’t available. The central locking works via electronic solenoids and pneumatic pipes, which leak. Locating the problem and fixing it can take ages, with a £1000 bill not uncommon.

Post-1997 SLs look nicer, but don’t generally wear as well; the SL got Nappa leather which looks plush, but the hide on earlier cars is significantly tougher.

The R129 bathes in the halo of Mercedes’ reputation for high-end engineering and resolute build quality and can make a true practical classic. All SLs have leather trim, but the upholstery on pre-1997 cars like this 1990 300SL tends to be more hard-wearing. You can have a V8 or a V12, but straight sixes like this one offer the most affordable running costs. If you buy well, the R129 can be good value to run. But parts can be costly – a new bumper is £1k-plus, fitted and painted.

In 2005 David Beard bought the 1990 300SL in the pictures, having set out to buy a Triumph TR6. He says, ‘I wanted a two-seater convertible and I had no preconceived ideas of what it should be. When I realised the SL was within my budget, I looked closer. The Mercedes has proved to be a very good buy because it’s superbly made and a brilliant cruiser, but if I were buying again I’d have a car with air-con.

‘So far all I’ve had to do is fit a new roof which cost £1200. Running costs are very low; I do all of the maintenance myself and I’ve just paid £11.50 for a pair of rear brake discs, delivered; the front discs were £80 for two. The car clocks up 1500 or so summer miles each year, which costs me under £200 for servicing – cracking value.’

‘I bought my 1999 280SL V6 R129 nine years ago; it has plenty of performance and I’ve taken the car from 69,000 miles to 128,000. It gives me constant joy and I can’t see myself ever selling it. ‘I’ve had just two problems: a failed crankshaft sensor that cost £150 to fix and a failed gearbox costing £2500. But for an everyday car it’s superb, with running costs very manageable. In the time that I’ve owned my car I’ve averaged about £600 a year on maintenance, using a local independent Mercedes specialist. My car is never garaged and rust isn’t a problem, so these cars really are suitable for regular use without costing a fortune to run.’

‘I bought my 1992 SL500 five years ago with 60,000 miles on the clock; it’s now done 85,000 with at least one European trip each year. I wanted a convertible and with long tours on the cards I needed a cruiser. I saw an R129 and thought how modern and stylish it looked – these are timeless cars. It’s also usable all-year round if you fit the hard top in the winter. ‘I wanted a V8 and looked at a V12, then realised the SL500 was plenty quick enough and would be cheaper to run. The car I bought needed some tidying; the biggest problem has been with leaking hydraulic roof cylinders, but the set-up is over-engineered, as is the whole car. ‘I do my own maintenance and so far it’s needed just fresh tyres, a new set of seals for the roof cylinders plus routine service parts. I’ve averaged just £300-£400 per year on maintenance – peanuts for such a wonderful car.’

Says Peter McIlvenny of specialist classic car insurer Carole Nash, ’It’s surprising a Mercedes that can boast Princess Diana as a former owner doesn’t command higher values, probably partly because of the high build quality causing a lack of rarity. We have only seen enquiries for these cars in the last few years; in that time we’ve seen values vary widely. Look out for cheap body repairs and non-functioning electrics. The right spec and a full service history are a must; paying a little more now could save you a lot more in the future. In terms of values moving forward it is hard to say but do you know of a cherished classic Mercedes roadster whose value has fallen? Buy now, enjoy, and watch your investment grow.’