1 Prices vary wildly but have all risen in recent years. Projects start at £3k-£5k. Roadworthy cars likely to need significant investment before long are at least twice this.

2 Prices of good condition cars start from £15k. Values depend on condition rather than specification.

3 Pay up to £40k for an excellent original or restored car. The latter will probably have cost its owner at least £60k to get the work done – which is why so few really good G-Wagens come up for sale.

Next year marks the 40th anniversary of an SUV that was conceived as a go-anywhere military vehicle but has now evolved into a cult classic. Recently replaced by an all-new G-Class, the original Gelandewagen (cross-country vehicle) has become a favourite for tuners to turn into a luxurious and fast road-biased SUV.

Manufactured by Magna Steyr in Graz, Austria, the G-Wagen was sold around the globe and features superb build quality, a functional cabin and the ability to tackle seriously tricky terrain. 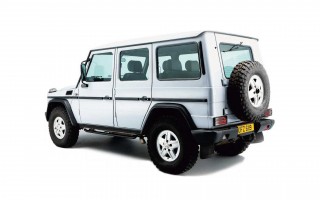 Launched in Europe in 1979, its UK sales began in 1981. US buyers couldn’t buy an official import until 2002 – six years after UK sales first ended. They resumed later, but Brits only ever got underpowered diesels that need to be thrashed, destroying their economy and refinement. The petrol versions offer better refinement and performance but are ferociously thirsty, so it’s worth shopping in Europe for a diesel model such as the G270/300/320/400 CDi (though the V8 engine in the latter isn’t very durable).

While poor Gs abound, values have risen along with the model’s profile. Within a few years the number of survivors will drop markedly as sub-standard cars are broken up, leaving a higher proportion of good examples but significantly higher prices.

1 The Mercedes-Benz G-Wagen launched in 1979 in four-cylinder 230G and six-cylinder 280GE petrol formats, and four-cylinder 240GD and five-cylinder 300GD diesels, all carrying the internal Mercedes codename W460. There was a choice of three-door short-wheelbase or five-door long-wheelbase (450mm longer) bodies, also a SWB convertible and LWB van. Only a manual gearbox was available. All cars had switchable four-wheel drive, and two diff locks were optional.

2 An automatic gearbox and optional air-con were offered from 1981.

5 Power steering was standard on all models from 1987.

6 A substantial facelift in 1990 lead to a change in codename to W463, identified by the fuel cap hiding behind a side lap. Four-wheel drive was now permanent, three diff locks were standard. The interior was overhauled, anti-lock brakes were optional and the 170bhp 300GE arrived as the most powerful G yet.

The separate chassis can rot spectacularly – get the car onto a ramp and focus on the rear suspension top damper mounts and spring platforms because they can cost £750 per corner to put right if they’ve gone. While you’re there ensure the fuel tank retaining straps are in good condition, along with the tank itself (it’s plastic in the W463). The steel straps can rot, resulting in the tank dropping out.

The W460 is more resistant to rust than the later W463, but check all G-Wagens’ bodywork thoroughly for signs of corrosion. A W460 body and paint refresh starts at £5k, full body restorations can easily surpass £20k. Home in on the front windscreen surround beneath the rubber and check the carpets for damp, because the car will deteriorate swiftly if water has started leaking into the cabin.

Blocked drain holes mean the sunroof mechanism can corrode on W463s (the W460 wasn’t available with a sunroof and most Japanese-market W463s got air-con instead). Repairs can cost £5000, so walk away if there’s tape around the sunroof or evidence of blocked drains. The rear quarter panels around the tail lights and rear door pillars are further weak areas.

When inspecting a cabriolet make sure the roof is in good condition because replacements can cost thousands. Cabriolets are noisy at motorway speeds, New replacements are available for all panels and in most cases there’s a choice between genuine and pattern. The former cost more but it better, significantly reducing labour costs.

All radiators are cooled by a viscous fan which is prone to wear. Test whether the engine gets hot under load or when idling. Budget £250-£300 for a new fan if the gauge creeps up, although it might be that the radiator is blocked internally. A replacement costs around £500 for a genuine part; pattern radiators are best avoided. The metal W460 radiator can be recored, but the W463’s plastic item must be replaced.

The W460 runs in rear-wheel drive mode unless 4WD is manually selected; the W463 has permanent 4WD. Both have a low-range gearbox and differential locks, the latter being electronically controlled in the W463. The transmission should be reliable as long as you change the oil in the gearbox, transfer case and diffs; budget £3k for a rebuild and it.

Gs are capable of handling rough terrain – but if a previous owner has been over-enthusiastic it will have taken its toll on the steering, brakes and suspension. Watch out for broken rear springs; replacements cost £150 each. The steering box wears, but a rebuilt unit only costs about £300. The disc/drum brakes can seize through lack of use, but you can overhaul everything easily enough. Only the later V8 and V12 Gs got discs all-round.

Although the G-Wagen was conceived as a military vehicle, Mercedes soon latched onto the fact that it could be sold like its regular passenger cars – which meant an extensive options list. Items such as Recaro seats and alloy wheels were offered from 1981.

The 460’s interior is spartan but well-made. Later cars are more luxurious but feature lots of fragile plastics that generally can’t be replaced. The driver’s seat of a high-mileage car is likely to have seen better days, with damage unlikely to be confined to the bolsters. Retrimming is the only option; correct fabric material is usually available apart from certain early W460 materials and W463 colours. If the cabin has got damp the fibre-board headlining moulding will be sagging. Fixing it means removing the whole interior.

While the regular W460 G-Wagen came with 12-volt electricals, a military version (the W461) was offered with 24-volt electrics, though these rarely come onto the market. The 12-volt system is generally reliable but if water has got into the cabin expect plenty of earthing and switch problems. Replacement components are readily available.

Water leaking into the later W463 is bad news because the ECUs fail – there’s one for the anti-lock braking system and another for everything else. They are available only from Mercedes and replacements cost more than £1000 apiece.

‘Even with 1.1 million miles under its belt my G still has its original axles’

Prices for good G-Wagens start at around £15k; values are generally condition- rather than specification-based.

Mercedes used about a dozen engine types – most are extremely robust.

Rear quarter panels around the tail lights and rear door pillars are rot-prone. Also check beneath the rubber surrounding the front screen.

‘I’ve worked for Mercedes since the 463 was launched and I fell in love with the G-Wagen after driving my boss’s early car,’ he recalls. ‘They have always been built by hand, hence their rarity, which I love along with the rugged looks. But owning one is a commitment – you have to use it regularly because leaving it standing leads to deterioration. Servicing is important – keep on top of brakes, diff locks and running gear to avoid big bills. ‘Parts availability is generally very good and so is DIY maintenance – I do most of the work on my cars myself.

On average I spend £1200 per year, including MoTs (£150), servicing (£250) and periodic jobs (£800). However, work can be hard to budget for because parts can be surprisingly cheap or very costly, it’s all very inconsistent.’

Mike owns three G-Wagens and has owned three others, ‘I’ve owned and worked on G-Wagens for 15 years and have seen cars change hands for tens of thousands of pounds that were beyond economically saving. The possibility of buying a nightmare is very real – but if you can find a good one you’ll understand why they have such a cult following. I’ve driven mine in wintry weather that would have left my previous Land Rovers stranded.

‘While a bad G-Wagen will be a money pit, a good one can cost virtually nothing to mainten – my biggest bill in 14 years of ownership was £600 for rebuilt front brake calipers. The G is easy to service at home, which helps to cut costs further. I had one car for 15 years and in all that time it just needed a new bulb and a wheel bearing. The key is plenty of preventative maintenance with a comprehensive annual service. Heavy expense will come from neglected cars needing major rust repairs. The running gear is really reliable and super strong.’

‘I’ve owned quite a few G-Wagens including my everyday car which I bought 12 years ago with 600k documented miles on the clock. Since then I’ve added just over 500k miles, and spent around £20k in total. I’ve replaced every single bearing, bushing and mounting in the drivetrain over the years, and infrequent items like engine and transfer case mounts. No individual item jumps of the page as being big-ticket.

‘The factory-fitted 88bhp engine wasn’t powerful enough so I swapped it at 800k miles for a 160bhp unit – though the original is still going strong in another G. ‘Even with 1.1 million miles under its belt my car still has its original axles. The key is to service it beyond the factory schedules – oil every 3000 miles and filters every 6000, and an annual oil change for the diffs and gearbox.

‘It’s taken me to North Africa and across Europe. I’ve also taken it round the Nürburgring – but that was with the original engine, so a lap took 35 minutes… I also use it for some pretty serious off-roading but as my everyday transport it also has to do the school run and shopping. ‘Whatever I use it for it seems to do 21mpg but after fitting a military-spec plastic fuel tank the range is around 400 miles instead of the 250. My G-Wagen can cope with whatever I ask of it – I can’t think of a more versatile car.’