WHO DOESN’T LOVE A POSH HOT-ROD?

Especially one with a 6.2-litre V8 under the bonnet, an AMG badge on the bootlid and Satan’s sonata blaring stridently from its quadruple tailpipes. The Mercedes-Benz C63 AMG, which first smoked its way onto British highways in 2008, ensured that the V8-engined BMW M3 never had things all its own way. So compelling was that brutal battle that evo threw these savage rivals into the ring together several times during the C63’s six-year lifespan. 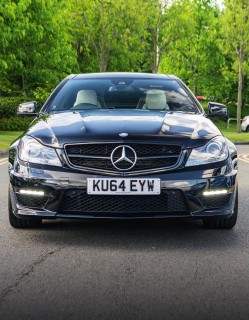 While records show the M3 emerged victorious in every encounter, the C63 always put up a valiant fight, the BMW’s superiority emphatic only at the upper reaches of its dynamic repertoire. Most of the time, for most of the people, the C63’s ability to provide instant gratification through sheer firepower, epic soundtrack and easy willingness to adopt a smoky sideways attitude out of every corner made it a very compelling alternative.

Based on the W204 C-class, the rear-drive AMG C63 – saloon and estate – made its UK debut in mid-2008, its M156 6.2-litre naturally aspirated V8 thumping out 451bhp at 6800rpm and a hearty 442lb ft. Its transmission was a torque-convertor automatic, but AMG’s seven-speed Speedshift Plus 7G-tronic proved so slick and intelligently programmed (complete with throttle blipping on the downshifts) that it wasn’t a handicap.

The optional Performance Pack (PP) beefed up the suspension and brakes, raised the 155mph speed restrictor to 174mph, put a carbonfibre spoiler on the bootlid, and crucially added a highly desirable limited-slip differential. That diff was lost as standard issue with 2010’s Performance Pack Plus (PPP), as was the uprated suspension, but the PPP used the lightweight pistons, conrods and crankshaft from the SLS to ramp up power to 480bhp – the engine mods having been previewed in the 513bhp ‘DR520’ model.

A facelift in 2011 also brought a coupe version, which climaxed in the motorsport-inspired 510bhp Black Series. As well as freshened front-end styling, the facelift included a revised automatic with improved shifts and an extra ‘S+’ mode for its gearchange strategies. As a farewell to naturally aspirated V8s, in 2013 the Edition 507 arrived, featuring the Black Series’ bonnet, larger front discs and meatier calipers, and a power boost to 500bhp. When new, these Mercedes C63 AMGs suffered fearsome initial depreciation, but values have now stabilised and are even rising for the right cars. Let us help you find one.

Coupes can fetch a couple of grand more than their four-door siblings, while the comparative rarity of estates also generates a premium. Even rarer are Black Series coupes, with their protruded wheelarches, race-car-spec canards and optional rear wing. If you can find one, it’ll be £90k-100k. The car pictured here is a 2014 coupe with 18,500 miles on the clock. It’s for sale at L&L Automotive in Hertford, priced at £35,990. Call 01992 726 173.

ENGINE Both the standard C63 V8 engine and the Performance Pack Plus version with its SLS-sourced internal components are, to quote Ollie Stoner of Portsmouthbased Mercedes specialist Prestige Car Service, ‘pretty much bulletproof ’. 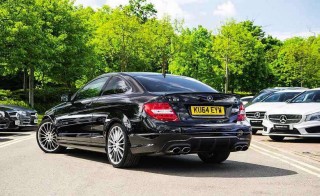 However, and predominantly with early engines, the valvegear – camshaft lobes and tappets – can suffer from wear, and very occasionally head bolts have been known to snap.

Another rare fault, but not unheard of, is for an injector to stick open, filling the bore with fuel; the hydraulic pressure this creates can break conrods.

Highly unusual though these faults are, a specialist inspection before purchase can pay dividends – a complete engine rebuild can be as much as £8000, and even a top-end overhaul may set you back £3000-4000. ‘The facelifted C63 [from 2011] is mostly trouble-free,’ says Ollie, ‘and is coupled to a better gearbox.’ All AMG engines use oil, however, so pay regular attention to the dipstick.

TRANSMISSION ‘The automatic gearbox is extremely reliable,’ reckons Ollie. However, it’s worth tracking down a car with the limited-slip differential, which was included with the Performance Pack but was otherwise optional. It transforms the C63’s handling during hard use. Yet even for cars fitted with AMG’s own LSD – as well as for those without it – a popular and highly effective upgrade is a Quaife  ATB LSD.

And while we’re on the subject of traction, don’t skimp on the tyres: budget brands will ruin the handling and diminish the grip.

SUSPENSION, STEERING, BRAKES Aside from the very occasional leaky damper and the need to replace bushes on high-mileage examples, the C63’s suspension presents no problems. On some cars you might hear a slight knocking from the front end when passing over bumps – this is most likely to be slack in the steering rack, which can be adjusted relatively easily.

With so much freely accessible grunt on tap, the C63’s brakes can take a hammering when trying to arrest all that speed. Standard discs are a very reasonable £68, but a set of front pads are more than £200. The Performance Pack’s floating discs, however, are more like £500 a piece, while a full set of the composite discs found on the Performance Pack Plus can be as much as £1500-2000. If you’re not prone to going completely bananas, a set of pads could last you 25,000 miles – chances are, though, that you’ll need to replace the discs at the same time as they’re on the soft side. Meatier discs are a popular upgrade.

BODY, INTERIOR, ELECTRICSBe vigilant for accident damage – huge power and rear-drive is a volatile combination in inexperienced hands. Cabin trim is of very high quality, but the front seats’ chunky bolsters can suffer from wear. There are no common electrical issues, but know that there are software updates for the engine and gearbox. These can be carried out by main dealers or specialists.

‘For three weeks before I bought the C63, I owned a Monaro VXR. I’d been inspired to get it by a mate who owned a Vauxhall VXR8. I liked the power and the noise, and I definitely wanted a V8. But then I went with another mate to collect his C63… It was better in every way: the way it looked, the way it sounded, the way it was built.

‘So I quickly did a bit of research into which model I wanted. My friend’s car was a pre-facelift version, but as I looked into it, I realised that a facelifted example would make more sense. It has an improved gearbox and the engine’s internals are better.

‘I was lucky with my car. It popped up in the classifieds and was reasonably close, and I bought it within three hours of the ad going live. It’s a 2011 Edition 125 saloon in white, with the optional Performance Pack Plus. It’s awesome at everything: docile when you need it to be, so it just blends in with the traffic, and loud and ferocious when the mood takes you and the road conditions allow.

‘I’ve since modified it with IPE exhaust headers, sports cats and a remap, and the sound it makes is simply amazing. I’ve also fitted high-flow air filters and a carbon airbox, but I’m not really sure they’ve made much difference. Because I always intended to try a trackday or two and a high-speed event in my C63, I immediately replaced the front discs and pads, which cost about £870. And after the trackday I needed another set of pads, which was another £175.

‘The Terminal Velocity event I went to was on a 3.1-mile RAF runway; standstill to however fast you can go. I hit 173mph but I was hoping for more – the run was into a headwind and severe brake fade made me nervous of when to back off. But I’m going back hoping to be quicker.

‘Would I ever replace it? With what? To go any faster I’d be spending double the money.’

WHAT WE SAID SUPERSALOON GROUP TEST, 2010

‘The wild child on track at Bedford Autodrome was always likely to be the C63 AMG, being the most powerful and keenest to smoke a pair of rear tyres. And so it proves, though my main concern is getting the best from the old-fashioned auto gearbox. You have to plan and anticipate every shift. Suss that out, though, and the C63 serves up a generous helping of tail-led entertainment – not the most technically proficient way of circulating, but it puts a smile on your face.

‘It could just be a drag-racer, the C63, but it’s not. Not by a long chalk. “Although you can light the tyres up with a half-prod of throttle, it’s still exploitable and enjoyable, because it’s small and has probably the best steering feel of the group,” says Henry Catchpole. Indeed, the combination of so much power and a very able and rewarding rear-drive chassis holds immense appeal. “Brilliant at mooching and extremely capable and engaging right up to and over the limit,” says Richard Meaden.

“Not as sharply focused as the M3, but this arguably makes it the warmer and more rewarding car in all but the most extreme driving. Love it.”’

AUDI RS5 Despite being the C63’s dynamic inferior, the four-wheel-drive Audi’s used values are similar to, or even ahead of, the bombastic AMG’s. From £22,000.

VAUXHALL VXR8 A bargain when new, the V8 Vauxhall’s modest second-hand values (starting at £14,000) undersell its performance and raw but effective charm.

Above left: 6.2-litre V8 is bursting with character, and is reliable, too; don’t skimp on tyres, though: with 442lb ft of torque the C63 needs all the grip it can get. Below left: cabin quality is very high indeed.

Prices from prestigecarservice.co.uk, including VAT. Servicing is mileage- and age-dependant: your car’s official Mercedes Digital Service Book (DSB) will advise on what your car needs and when.