As a toned down replacement for the “Fintail” models, the W108 was never going to set the world on fire with revolutionary styling or talent. No, Mercedes preferred the path of evolution over revolution, smoothing off the lines, bringing the car up to date, but retaining the key Mercedes virtues of solidity and comfort. Paul Bracq lowered the Fintail’s waistline, removed the now-passe fins, and smoothed over the whole car – the result was a softer, sleeker S-class to drag the model firmly into the 1970s. 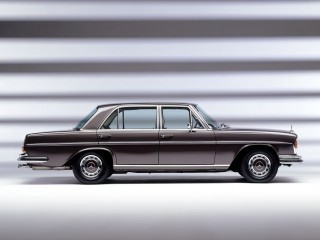 There was a long wheelbase version too – following the 300SEL Fintail, the market had grown used to a car slotting between the 300SE and the mighty 600. This car, launched as the W109, also featured self-levelling air suspension. Later, the 280SEL would bring the long wheelbase body into the W108 line by omitting the air suspension and other features.

Launched in 1965 and built until 1972, even the newest examples are now 46 years old – a card carrying classic, and one which by all accounts should be carrying a platinum Amex. And yet you don’t need the platinum Amex to buy or run one, because they’re relatively simple and smaller-engined models are still accessible to those on a budget. And with 359522 W108s and 23430 W109s built, there are more than enough to ensure you can find a good one. If you want to get yourself behind the wheel, here’s what you need to know.

It’s a 1960s saloon – there’s a lot of metal and it can all rust. Your first check should be the paint – if it doesn’t match well or if it’s suspiciously new, chances are it’s hiding recent repairs… and you don’t know how good they are until you look closely. The worst areas are the spare wheel wells, plus the front wings. These rot out around the headlamps, and also behind the wheelarches. Check the jacking points by inserting the factory jack and using it as a lever – though we’d advise you to jack against load bearing components rather than the original points. Check under the brake master cylinder and battery for any rot around the bulkhead, as this is a structurally important area and any sign of rot or filler here is bad news. Look underneath the doors too, in the frames – rust here generally means bad news for the sills, even if they appear to be solid on the outside. Side trims should show no signs of rust – and unlike many Mercedes, there was no chrome trim on the arches as standard. If there is, ask what it’s hiding. Panels can be sourced from Niemöller in Germany, and while cars being broken in the UK aren’t exactly common, trim shouldn’t be too hard to source.

Smoking on acceleration or deceleration could simply be valve stem seals, but it’s equally possibly on any of these engines that it might be worn valve guides.

“Mercedes preferred the path of evolution over revolution, retaining the key virtues of solidity and comfort.”

Fuel lines on the V8s are high pressure, so it’s worth checking them before any test drive. Any deterioration could lead to an underbonnet fire if you’re unlucky. They’re also prone to timing chain stretch, which can damage valve guides, cause the cams to skip and lead to valve/piston interfacing which could cost a fortune to repair. Neglecting the camshaft oiler tubes can lead to camshaft failure – and these should be replaced, not reground – they’re not suitable for the latter.

All models used gearboxes developed and built by Mercedes itself, with a choice of three and four speed automatics and four and five speed manuals depending upon the age and engine of the car in question. Most manuals were four speed – the five speed was optional from 1969 on six cylinder models. Manual boxes don’t pose many issues in service, though obviously you should check that the clutch isn’t slipping and that the bite is good. Few UK cars are manual, but the rarity doesn’t make them more valuable or more difficult to source spare parts for. Manuals were available with floor or column shift.

The automatics used were again Mercedes’ own, the 722.2. Mercedes’ first in house automatic was in production for 22 years in various forms, and spares are widely available. Six cylinder models used a hydraulic coupling, while a torque converter was used on the V8 models with a slightly stronger derivative of the same box (dubbed 722.0). It’s a fully hydraulic box, with the exception of the kickdown solenoid, and as such there is relatively little that can go wrong with it. Nonetheless, ensure that the parking pawl operates correctly, that all gears operate as intended and that the fluid is a bright cherry red. Check the shift quality too – if it’s slow, harsh or slipping then the box may need a rebuild – or it could be a vacuum line loose from the modulator.

Differentials tend to be longlasting, but even the newest are fast approaching fifty years old now. Check the history file for evidence of a rebuild – if not, repeatedly engage forward and reverse gears and listen for clonking noises. Any reputable specialist should be able to rebuild one.

The W108 is independently sprung using double wishbones at the front, with a diagonal swing axle incorporating air suspension for self-levelling on W109 models. Front suspension overhauls aren’t cheap – while parts are inexpensive it’s labour intensive. In particular, check the kingpins for excess movement – there should be relatively little movement in a good example. Rubber bushes deteriorate – these are something we’d recommend doing (and negotiating for) on any car if there isn’t a recent bill to cover replacement.

We’d avoid models fitted with air suspension unless they’ve had recent work – neither the valves nor the airbags are cheap.

W108s use discs on the front and rear – with wider calipers and vented discs on the 4.5 and 6.3-litre models. The system is reliable in service – discs aren’t prone to warping, and handbrakes rarely pose a problem if maintained regularly. Many have upgraded smaller-engined cars to the higher specification brakes but it is not necessary – you shouldn’t value a car more highly as a result of this being done. Discs and pads are available, and cost small change – we found pads for under £10, and front discs for under £30/pair.

Make sure you buy a car with a good interior, as retrimming isn’t cheap. Heater levers can stick owing to broken valves – not a painful job, unlike replacing a leaking matrix or blown heater blower motor. These necessitate removing the dashboard – bank on 40 hours labour whether you do it yourself or pay a professional. If you want a working heater, it’s best to check first.

While the W108 and W109 were well equipped by the standards of the 1960s, there’s very little by modern standards to go wrong. Check the electric windows where fitted, and the air conditioning in the more upmarket variants. It’s not likely you’ll encounter significant issues, but even if you do the parts are available to put them right.

“Fuel lines on the V8s are high pressure, so it’s worth checking them before any test drive. Any deterioration could lead to an underbonnet fire if you’re unlucky.”

The W108 and W109 series Mercedes are still relatively simple by today’s standards – and yet once upon a time they were lauded as the best cars in the world. While prices are rising, the six cylinder models are still one of the most accessible luxury 1960s saloon families, and prices aren’t looking set to hit the stratosphere quite yet. Yes, a bad one will cost a king’s ransom to restore, but such is the availability of parts that if you buy a nice one you’ll have no problem keeping it in good order.

What would we buy? That depends on what we wanted. A 280SE 3.5 or a 300SEL 6.3 are undoubtedly the best investments, but equally they’re among the most expensive to buy in the first place. Ideally, we’d advise those on a budget to avoid the W109 as the extra cost and complexity of the air suspension can make ownership an expensive nightmare unless adequately maintained. If we just wanted something pleasant to potter about in, the 250S would be more than up to the job and is the cheapest there is, condition dependent.

We’d advise an automatic gearbox, most have leather or MB-Tex, and while electrical goodies can appear desirable we would choose a basic an example as we could get to minimize the likelihood of broken toys. As ever, it’s imperative to put condition first – a shabby 250S will cost you far more than a nice 280SE in the long run.