There’s something very magical about V12 front-engined Ferraris. That bloodline that stretches back to the absolute greats of the 1950s and 1960s; the beguiling purrcum- wail of the naturally aspirated engine; the continent-crushing romanticism of the grand touring ideal.

Arguably the 599 GTB Fiorano was the greatest Ferrari V12 GT yet when it was launched in 2006 as the replacement for the 575 Maranello. Named after Ferrari’s Fiorano test track, it proved to be very quick around the circuit: at 1min 25.6sec, it was just 1.6sec off an Enzo and a full five seconds faster than the 575.

Sharing some of its DNA with the fourseater 612 Scaglietti, it was the strict twoseater member of Maranello’s frontengined family. It certainly marked a new era of modern technology at Ferrari: an allaluminium chassis, plenty of carbonfibre, F1-Trac stability control and magnetic dampers (the first ever Ferrari to be so fitted). Add into the mix the fact that pretty much all cars supplied had the F1 SuperFast gearbox and carbon-ceramic brakes, and buyers were treated to a technological tour de force.

The 599 looks the part, too, with its broodingly butch  Pininfarina-penned bodywork and sizeable dimensions. 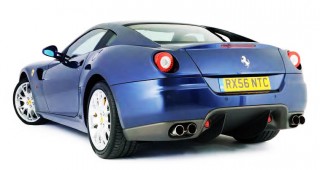 It’s very usable, too, with its spacious cabin, generoussized boot and extra luggage area behind the seats. The engine is the star component, though. Ferrari made great play of the fact that the 6.0-litre V12 was basically the Enzo’s, albeit detuned to 620PS (611bhp), delivered at 7600rpm. Ferrari claimed 0-62mph in 3.7sec and a top speed of 205mph.

Although it was offered with a six-speed manual gearbox, in practice almost every 599 sold had the F1 six-speed self-shifter with paddles (just one solitary 599 manual was sold in the UK). And pretty much everybody took up the optional Brembo carbon-ceramics brakes. Another popular option from 2008 on was the HGTE (Handling Gran Turismo Evoluzione) package. Costing £14,567 new, it included a lower ride height, beefier rear anti-roll bar, retuned dampers, noisier exhaust, quicker F1 gearchanges and stickier tyres.

599 production ended when the new F12 was launched in 2012. Exact production figures are not known but it’s thought that around 800 cars per year were made, so it was a popular model.

The 599 remains a very useable supercar. Yes, it’s an expensive item to keep going but it’s also proving pretty robust. It’s better screwed together than some Ferraris of yore and can even be treated as an everyday car.

Settling into the cabin is easy as it’s so spacious. The dash is dominated by the central rev counter (in either red or yellow), while the milled aluminium switchgear feels superb. The carbonfibre-backed seats offer brilliant support.

Pressing the red ‘engine start’ button wakes the big V12 with a snarl. The throttle response is crisp and immediate – no turbos to delay the action here – and while there’s a big slug of torque low down, it’s really at the higher rev reaches that the fireworks are to be found. Peak torque arrives at 5600rpm and maximum power – all 611bhp of it – comes at a scintillating 7600rpm, at which point the 599 has unleashed an almighty tsunami of speed and sound.

The F1 automated clutch works smoothly around town, while the paddle shifts offer you super-fast changes up and down the gearbox (optional shift lights in the steering wheel telling you exactly when to change up). There are only six ratios but you never feel like you’re short of power.

This is a big car, and you really feel its bulk at times. It’s more at home on fast, sweeping A-roads than on twisty roads, for instance. That said, the 599 has an undeniable balance to its handling. Switch the steering wheel manettino from Sport to Race and there’s a notable change in the damping, hunkering the 599 down and giving it a more nervous edge – and even the opportunity to wag its tail if you stab the throttle hard.

With the HGTE package fitted, the 599 is definitely tauter around bends, qualifying it as the enthusiast’s choice – but beware that there’s a significant impact on the ride quality, denting the 599’s grand tourer credentials. 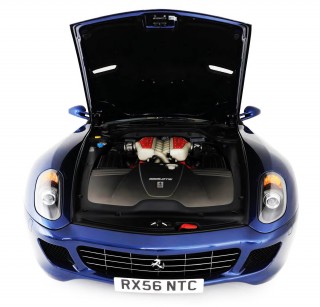 The detuned, lighter version of the Enzo’s 5999cc V12 is proving a robust unit. Unlike the cambelt-equipped engine in the 612 Scaglietti, the 599’s engine uses timing chains, so there’s less complexity. As this is a dry-sump powerplant, it’s tricky to check oil levels (you need to do so when the engine is fully warmed up). Overfilling with oil can lead to the engine filling with oil or vapours from the oil, which obviously isn’t great.

A factory replacement exhaust will cost you £7000, which perhaps explains why aftermarket exhausts are so popular, but satisfy yourself you can live with the decibel reading that some of these have.

The F1 gearbox is also tough. Make sure the gearchanges, both up and down, are crisp and that the ’box doesn’t disengage to neutral unexpectedly.

Electronic glitches can often be solved with a software reset. The gearbox oil needs to be changed every two years or 37,000 miles. Check for clutch wear either via a diagnostics test or feeling for juddering when pulling away. Clutches can last 30,000 miles or more if treated sympathetically, but lots of stop-and-go urban use will shorten this. A replacement F1 clutch is around £5000 fitted.

In construction, the 599 is a robust aluminium monocoque. The suspension (double wishbones, coilovers and a rear anti-roll bar) is fairly tough but ball joints are a weak area, revealed by knocking noises; the cost to fix is £1000 for both sets of joints. If your Delphi MagneRide dampers are leaking, replacement is around £3200 for a pair.

In practice, almost all 599s have the optional Brembo carbon-ceramic brakes, rather than standard steel ones. They’re superb in action and almost wear-free – just as well because replacing all four discs will cost you well over £5000. Four replacement pads for the carbon system come in at £1500.

The 599 GTB has 19-inch front and 20-inch rear wheels that are rather prone to impact damage, so check carefully for dents, dings and warping. Tyres should be the correct Ferrari-spec Pirelli P Zeros or Michelin Pilot Super Sports. Tyre wear can be high, especially on the rears (less than 10,000 miles is typical); expect to pay around £180 per front tyre and £300 for a rear.

Body corrosion isn’t an issue but check that the undertray is undamaged. Since the 599 GTB is such a wide car, parking dings are common, while the front spoiler can also bottom out over sleeping policemen and the like. Also the Perspex rear quarter-lights can craze; the cost of a new one is £500. The paintwork should be perfect, but owners have complained that it’s so thin that enthusiastic polishing can go right through it. 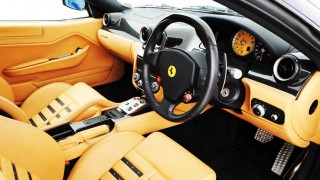 Check the leather trim for general wear. The leather that covers the dashboard can shrink if left in direct sunlight for too long; recovering with leather is a big job. A highly desirable option is the carbon interior package (centre console, dash top, steering wheel details and shift paddles). The plastic coating on some interior items can become ‘gooey’, meaning replacement is required.

Warning lights randomly flashing on the dash are an occasional issue; isolating the battery for a few minutes via a switch in the boot seems to resolve things in most instances. It’s a good idea to keep the battery on trickle charge, as low-charge or flat batteries seem to throw up error messages. Many owners simply forget about the factory sat-nav system, which is audio-based and very slow. The electronic instrument display can be problematic, too; a new screen is very expensive (at least £8000) but rebuilds are possible and much more economical.

As with any V12 Ferrari, servicing needs to be meticulous, and any gaps in the record will dent values. Although pricey, the 599 certainly isn’t the most expensive supercar to service, partly because its engine timing is by chain rather than belt. 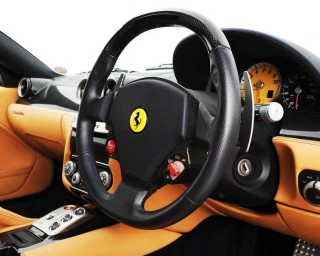 Typically an annual service at a Ferrari dealer is around £1500, with a more major one (every three years) northwards of £2000. Independent specialists can be a little cheaper than this. Budget about the same amount again annually for fixing things.

It might be worth considering buying Ferrari’s Power Warranty. This offers full warranty cover for cars up to six years old, while the engine and gearbox can be covered up to ten years old. It’s on the pricey side but offers the peace of mind of full factory back-up.

The market recognises that the 599 has a firm place in Ferrari’s pantheon, and prices are now definitely firming up – we’ve seen a rise of around 25% over the last year. The minimum cost of a 599 now hovers around the £90,000 mark, with desirable HGTE cars more like £130,000 and up. The rarity and allure of the GTO badge means that you’re looking at between £450k and £750k for one now, and around the same for an SA Aperta.

Peter Churchley owns the magnificent 599 GTB in our pictures, one of the first UK cars (January 2007). “I bought it 12 months ago to do continental trips in, and it’s absolutely fantastic for this. It can cruise happily for hours but it feels like a ‘universal’ car – something that can pootle happily around town, yet totally change character when you’re in Race mode. The performance is mind-blowing. It makes me smile the whole time.

“The original owner did a great job on the spec. It’s Tour de France Blue with a blue-stitched tan leather interior, Daytona seats, blue leather inserts and carbonfibre. It’s done 30,000 miles now and the clutch and carbon brakes are showing no signs of wearing. It all feels very well put together and bullet-proof. I can’t wait to take it to the Mille Miglia and Le Mans later this year.”