Renault updated the Dauphine with a shape surprisingly similar to Alfa Romeo’s abortive Tipo 103 – a front-drive small car that was shelved because it was building Dauphines under licence instead. Mechanically, of course, the R8 was quite different and Renault’s experience with rear engines ensured that it was remarkably quiet, refined and spacious. The new model developed a keen following and, in Gordini form, achieved considerable success in racing and rallying. It also donated many components to the Matra Djet and Alpine sports cars.

Built in France, Spain, Bulgaria and Romania (as the Dacia) and assembled as far afield as Venezuela, Mexico, Algeria, Morocco, Canada, Australia and New Zealand (but ironically not by Alfa in Italy), the 8 and 10 enjoyed a 14-year life and were made in big numbers, but survivors are rare and interest is only beginning to grow in their home country. Investigate the origin of cars for sale, because not all had the same spec; for example, Spanish-built 8s had rear drums.

All-disc brakes were a rare luxury on such a small saloon, but helped to give it an edge in competition – allied to its rear-drive traction.

The new Cléon-Fonte engine family went on to power Renault’s front-drive saloons for decades; later 5 and 5 Gordini 1397cc units are sometimes found in surviving 8s and 10s. When the 1100 R8 was launched in ’1964, testers eulogised over its brilliant combination of performance and economy and that carried through to later models.

The shape must have been more aerodynamic than it looks, but one of the secrets was the gauge of steel used – the cars were lighter than most rivals. The disadvantage was that when rust took hold, it wasn’t long before it had eaten straight through the thin steel. Corrosion was invariably worse under the surface than on top, affecting the inner wings, bulkhead and floors – as well as the more obvious sills and outer panels.

Almost all survivors will already have had extensive repairs – check that all are sound and competently done, and protected for the future. Few have been restored as comprehensively as Steve Cole’s R10 pictured here; membership of the Renault Classic Car Club is vital.

Gordinis are highly collectable and correct engine parts can fetch thousands of pounds. Inevitably, replicas are common and you need to carefully confirm that a car said to be original has the evidence and pedigree to back up its claims.

Early production models with Dauphines and 4s in 1962. Jean Ragnotti shows how to do it on the Monte Historique.

Chrome work is particularly hard to find because jumble supplies are gradually drying up and demand doesn’t justify New production: a good, full set is a bonus.

Cooling can be marginal due to silting From alloy head corrosion and to modern fuels. It’s worth while re-coring rad with extra-capacity; it’s vital to use inhibitor.

Gear-change was never great and gets Worse with wear. Synchromesh on first came with 1100 engine; confirm that it works and none jump out of gear.

Swing-axle rear end is well controlled; inspect for rot and for weak dampers. Rear disc brakes were great while they worked; lack of use causes seizure.

Always exceptionally comfortable, seats were mostly hard-wearing vinyl; fully reclining was a later option. Cloth can be sourced in France to retrim, as here.

Dash/switchgear had many production changes and much use of new plastics. The often weak components are hard to track down: check presence and function.

A new engine family arrived with the 8 that continued to be built up to 2004. They’re robust and powerful, but the alloy head can corrode, so inspect the oil-filler cap for emulsion. Rattles from timing gear and rumbles from the bottom end, plus excess oil blowing, indicate the unit is nearing the end of its useful life. Clutch kit costs c£280.

Launching a new wet-liner engine with aluminium head in the R8 gave Renault a power advantage over rivals, aided by low overall weight. Check the engine starts easily from cold, because the automatic choke can be unreliable; carb specialists can help. The ‘sealed’ cooling system was an innovation shared with the R4, featuring a separate expansion tank for top-up hidden under a removable grommet. It certainly needs checking for level and signs of oil getting in or overheating. Confirm the specification of the unit fitted: later transplants are common and likely to give more performance, though sacrificing originality. Gordini engine parts are more highly strung – check for condition and spec.

The rare automatic, with an electro-magnetic clutch operating an all-synchro three-speed ’box, is jerky in operation with quite slow changes. Light weight meant little self-centring on the steering, so Renault added springs to help, which takes acclimatisation. Inspect the rack for wear, and dampers for weakness. Cars showing negative camber at the back may not have been lowered: the gearbox mountings are in shear and the wheels splay out when they fail.

Both brakes and clutch were quite heavy when new and, even with the limiting valve operating correctly, the overly powerful front discs can lock – beware a faulty or missing valve, or poor tyres. New Michelins are available, but Cinturatos were preferred in period; fitting 13in alloys widens tyre choice. The handbrake linkage is prone to seizing, as are the Bendix calipers (£200 exchange), though rebuild kits are available.

Late-model 1300 feels nippy and rides well, like any Renault from the ’60s; the R10 handles better than its smaller sibling.

Cole has worked hard to make his late 1300 as refined as possible, and it shows. “I had 8s in the ’70s and always wanted a 10,” he recalls. “I was in China when this one came up for sale in Belfast, and my sister trailered it home for me! The chrome had been redone but the body was far worse than advertised. It’s amazing what you can find: I bought panels from Greece and Holland as well as France. Barkston did a superb job of the rebuild. Mechanically it was good: its one lady owner had done only 13,000 miles. It’s up to 30,000 now, in four years I’ve covered more than she did. I’ve done a lot of work on the exhaust, and added soundproofing to make it quieter – the body was thin. It’s so reliable now that I’d go anywhere in it!” 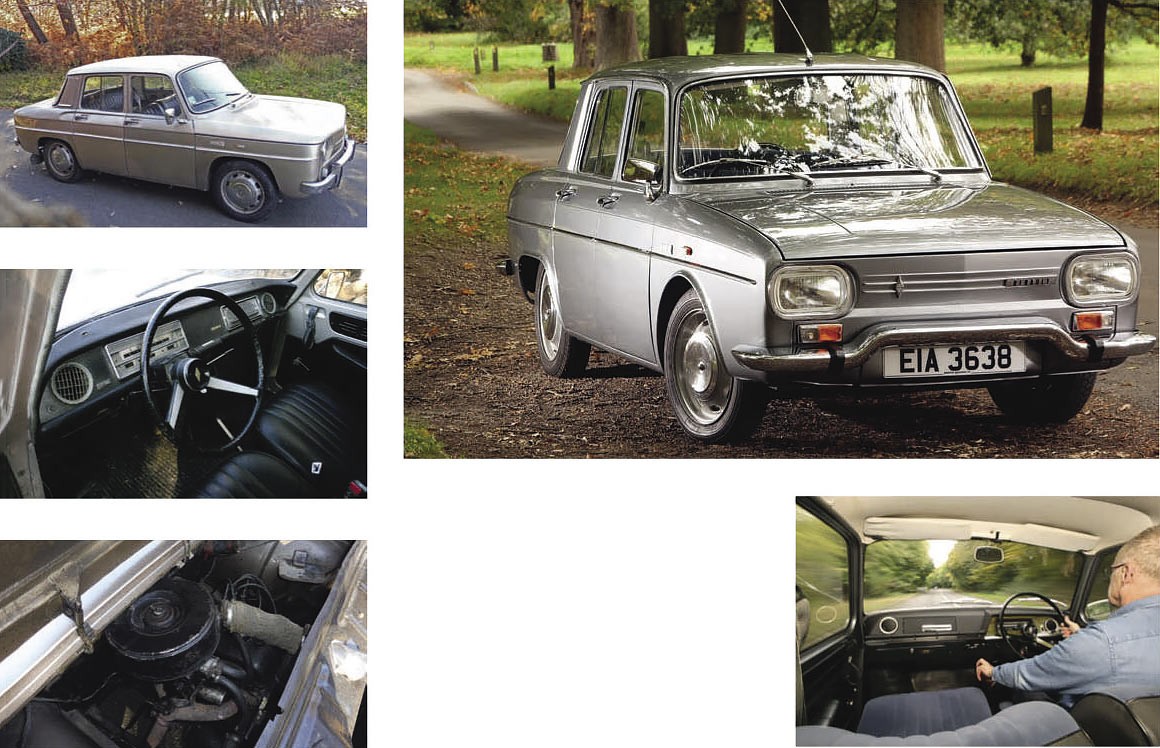 This 1108cc R8 Major looks scruffy but drives respectably. Performance is peppy, and you’re soon hitting an easy 50mph. The four-speed ’box has synchro that can’t be beaten, and the lever slots in sweetly every time, while the clutch bites sharply. The car brakes well, too, albeit pulling to one side, something the vendor attributes to incorrect pressures on the adequately treaded Nankang tyres. The steering is well weighted and smooth, and the ride buoyantly comfortable – aided, no doubt, by the recent new dampers.

That’s where the good news stops. The car sports a well-matured and somewhat approximate respray in dulled metallic bronze, and the way a magnet skitters across the body’s nether regions suggests a good skim of filler. The odd bubble indicates corrosion under the paint. The only hole that we could find was in one inner A-post; the floorpan, otherwise apparently sound, looks dodgy at the same spot.

Inside, the vinyl seats are intact but the original floor covering is missing, as are certain trim panels. The dashboard crash-rails are cracked and gaffer-taped and the headlining is holed. Szumny, selling on behalf of his son, knows nothing of the car’s history, and it was not possible to see the pass certificate for the contrôle technique, the French MoT; this would highlight faults needing attention. The verdict? Better can be found for the price, so haggle. Jon Pressnell

Oblong headlamps, fitted to the R10 from ’1968, neatly updated its appearance.

1965 Jul 1100 lengthened front and rear and launched as a standalone model, which later becomes the R10

Smaller but scarcely lighter than an R8, the Imp’s alloy ohc 875cc

Engine made it fun but unreliable and it lacked the Renault’s expandability (998cc unit was special-order). Rot claimed most.

With an air-cooled ohc ‘four’ and hot versions, the NSU was an interesting choice and lighter than the Imp, but base models had all-drum brakes and all were two-door. Economy poor.

The ultimate exponent of Renault’s rear-engined small car experience, combined with a sprightly new engine, produced a surprisingly refined, spacious, comfortable and lively little saloon that is a pleasure to drive and own now. But only if you find a really good one, or are prepared to devote a few years to sourcing parts and restoring a poor example.