Innovative design in every detail characterised the 2CV – the brainchild of Pierre Boulanger – with the joint aims of economy and convenience. Air-cooled with just two cylinders and no distributor, it was cheap both to build and to run. Yet it was one of the most comfortable cars ever built, using clever interlinked horizontal coil springs that act upon each other for all-independent suspension, with minimal unsprung weight thanks to low-mass wheels and inboard front brakes. Rack-and-pinion steering, a four-speed gearbox, separately controlled fresh-air ventilation and warm air heating, radial tyres and hydraulic brakes were also well ahead of period rivals. Headlight beams adjustable from inside and even road-speed-related wipers (driven from the speedo cable) took Deux Chevaux innovation well into the future.

The 2CV was launched in 1948, but development began before the war. It was built for 41 years, but it was only sold in the UK from 1953-1961 (when built in Slough) and from 1974-onwards. The tiny, unburstable flat-twin – designed by brilliant ex-Talbot man Walter Becchia – started square, at 375cc with 62mm bore and stroke, and gradually went oversquare to 602cc (74×70). Unlike most other economy cars, the 2CV was roomy, with a rear seat that could easily be removed for vast luggage capacity – or picnics.

Lightweight components and simple construction make home restoration entirely viable. Most have had the platform chassis replaced: galvanised gives ultimate protection, but painted is fine if it’s well looked after. The body is likely to have needed significant welding, too. Check that it’s been done, not filled over rot.

Inspect for signs of water getting into the car, usually via a leaking ’screen rubber or the vent flap seal. It will rust through both floor and chassis over time and late models in particular could have rotten frames within 10 years. Portuguesebuilt cars were not as well protected as late French ones. In extreme cases, the structure begins to bend, opening up the panel gap from the back of the front wing to the bonnet hinge, or closing it and causing the triangular panel to bulge out. Be prepared for significant expense if buying a car in this condition – and don’t drive it!

Owning a Deux Chevaux is a lifestyle statement and means joining a huge worldwide family of enthusiastic owners who will welcome you with open arms. You’ll never be short of help and advice to get the most out of ownership. 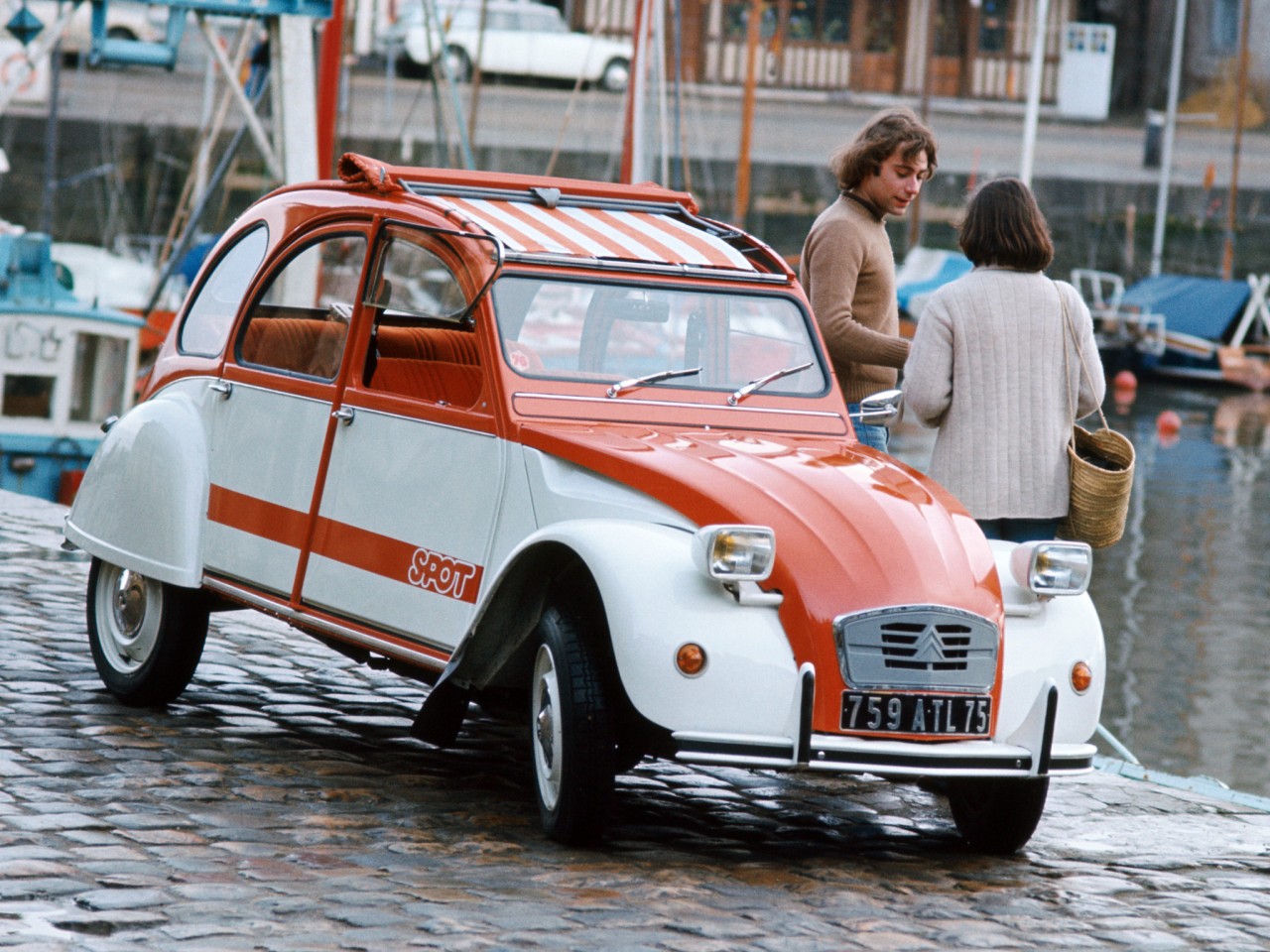 2CVs don’t have much power, but they should have enough to make reasonable progress. Rattly, weak engines may have broken piston rings and/or maladjusted valves. Conrods can break but it will keep driving on one piston, although it won’t be smooth. Plug threads do get stripped, but can be repaired. The unconventional dogleg gearchange should be easy and crunch-free. Test synchromesh (especially third) and listen for noise from worn bearings. Inboard disc front brakes replaced drums in 1981, and are easier to service (£13-18 for pads), but the handbrake (£10 separate pads) is less effective. Inspect for wear in kingpins, steering rack and trackrod ends. Kingpins should be greased every 1000 miles on early cars. Heavy steering indicates neglect. 2CVs started with a single-choke Solex carb (£135 new, 1963-1970), enlarged in 1970 (£120 exchange) and replaced by a twin-choke unit (£235 new) in 1978. The outside edge of the driver’s seat wears, and sunlight can destroy the tops. New rubbers and central canvas support will transform sagging chairs. Upgraded soft-tops and even heated rear windows are available, along with sunshades and thermal liners. An OE-specification roof costs £165.

1 Front bumper mounts (but these are easy to replace) / 2 Bonnet hinge and flange / 3 Windscreen surround and vent panel / 4 Toe board / 5 A/B/C-post / 6 Chassis, in particular the top surface / 7 Floors and sills / 8 Rear wing attachment areas, plus the inner wings around seatbelt mounts / 9 Boot hinge / 10 Boot floor, especially the back edge 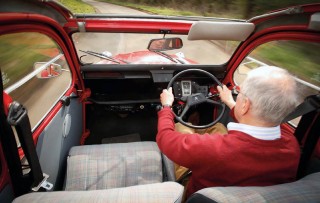 Roof folds halfway or can be rolled right back. Dash gearshift is initially a bit awkward but soon learnt. Hammock-style chairs are really comfortable.

A well-cared-for 2CV should start instantly (if in regular use), run smoothly and be surprisingly quiet. Power is not a term that really applies, but it should be able to keep up when rowed along between second and third, and cruise happily at 60mph. If not, something is awry. Look for service history and evidence that care has been lavished on the running gear and the structure. 2CVs came with a grille muff (as fitted to Spot on opening spread), to be fitted below 50°F and removed above 59°F. See that it’s still in the car.

The points are awkward to change – buried in a box behind the fan – so 123 electronic ignition is a popular mod. Numerous tuning options are offered; 9:1 barrels and pistons are effective or, as a cheaper option, skimming 0.3mm off the top of the barrels will enliven performance without penalty. Visa engine conversions are not a great idea, because the 652cc unit is not as durable.

If you really want more power, Sparrow offers a £700 kit to convert to a BMW R-series motorcycle flat-twin, with 70-125bhp – but you’ll need to spend a fair bit more on donor parts, stronger gearbox etc. You can even fit a 4×4 conversion.

Apart from brushes wearing, there’s not much to go wrong with the alternator and the rest of the electrical system is equally simple, though modern coils are not as good as the old ones. Toyo or Nankang 135×15 tyres at c£40 each (or even Maxxis at £32) are appealing alternatives to the Michelin X 125 at £95 – but the Xs last longer and look right. You can usually resolve noisy suspension by injecting vegetable oil into the cylinders and greasing the knife edges.

Forsyth bought this 1987 Deux Chevaux 10 years ago: “I’d always wanted a 2CV and saw this one at a show I was attending in my Ford Model A: I bought it on the spot. My wife has warmed to it, and we finally went to France in it last year. It attracted lots of attention, both from the French and other tourists.

“It’s all original and has done only 23,000 miles. I like the simplicity. It’s economical, has plenty of space and the suspension is fantastic – ideal for Britain’s deteriorating roads. It will just about keep up with modern traffic, cruising happily at 60mph until you come to a hill. “You can get all the spares, no problem – though all that this one has needed in 10 years has been a new silencer and an ignition coil!”

A 2CV leans dramatically in corners but grips tenaciously

WHAT TO PAY mid-run/early or late

This tidy Charleston was recently imported from Japan. It retains its original chassis but it all appears rot-free. It has fresh-looking Monroe dampers, as well as a new, cat-less exhaust. The body is good, bar a couple of blemishes, most noticeably a stone chip on the bonnet, plus a blown-in area on the nearside rear wing. The back of the bonnet/scuttle looks to have had paint, too, and the offside sill strip is a bit dinged, but these are minor quibbles and should not be an issue at this price. The tyres have lots of tread, with a soft cover on the spare that we’ve not seen before. The roll-back roof is in excellent shape.

The flat-twin now sports electronic ignition and an electric fuel pump. The starter also looks newish, plus there are extra earth leads, apparently a Japanese obsession. There’s a translated list of service items confirming it’s up to scratch.

It’s clean inside, but with a modern stereo hung under the dash and big speakers cut into the door cards. The gearknob is an aftermarket item, and the exhaust heat warning light is, of course, now redundant. It has rear belts. It starts instantly and revs freely in proper Deuche style, with strong synchros on the top three gears, plus the brakes don’t pull. The battery indicator – the only minor gauge to distract you bar fuel – shows normal. It comes with MoT to January 2017, plus the export document showing 63,138km, a handbook (also in Japanese), cover and grille muff.

Japanese-market Charleston has repeaters on side panels. Unworn mat and seats, which were reupholstered in 2014. Flat-twin in fine order; electronic ignition alongside coil. Tin Snails are often personalised by their owners, such as the cream wheels and bumpers on this one to match its top.

1985 Dolly two-tones added, based on Spécial

RENAULT 4 Renault’s first frontdrive car was a clear, measured response to the 2CV, rationalising the idea. It added a hatchback, two more cylinders, water cooling and torque. It rotted equally, too.

Idiosyncratic, brilliant and fun, the 2CV has succeeded where its French and Italian rivals have so far failed, capturing an enthusiast following so strong that prices have rocketed it out of its bargain basement origins. But be wary: cheap to run doesn’t equate to cheap to restore and rotten cars disguised with underseal and shiny paint abound. Buy cautiously.