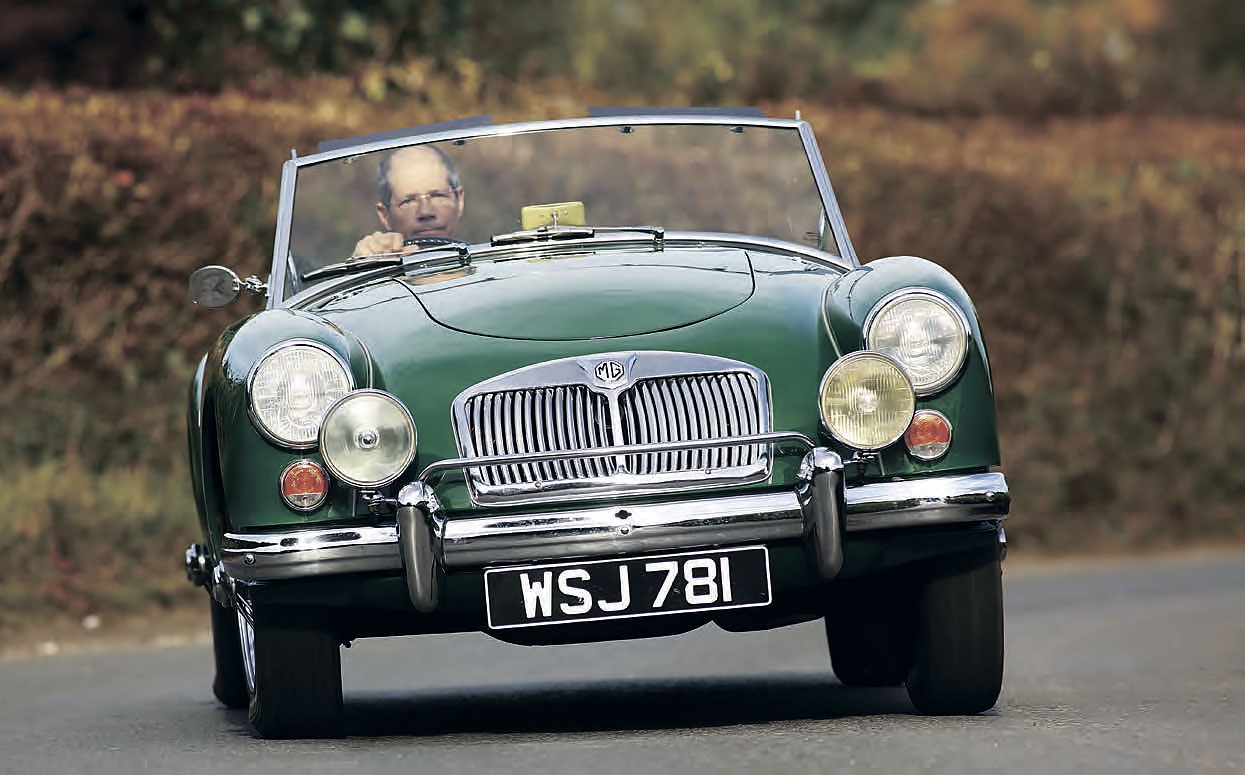 When motor racing photographer George Phillips entered his TD for Le Mans in 1951, MG designer Syd Enever produced an attractive streamlined body for it that was virtually the finished shape of the MGA. The car’s 116mph top speed showed its aerodynamic advantages, but its occupants sat high, on top of the chassis. Enever set young draughtsman Roy Brocklehurst the task of devising a new design, moving the side rails outwards to drop the seats. Scuttle shake, often the bane of separate-chassis roadsters, was eradicated by building a substantial ‘goalpost’ structure on the frame, supporting the front bulkhead. Aluminium-skinned doors, bonnet and bootlid helped to keep weight down.

Completed in 1952, it was at first rejected by BMC management (which was about to launch the Healey 100) and became a record-breaker, but in 1954 it was prepared for production. The corporate B-series Austin engine, newly enlarged to 1489cc, made it a much more appealing prospect than with the costly XPEG unit.

Three aluminium-bodied race prototypes were built for Le Mans in 1955, one finishing 12th and one 17th. They ran again at Dundrod, testing twin-cam developments and disc brakes even before the production model was launched.

The pretty MGA proved extremely popular, safe and fun, with a high door-line that made it feel comfier than many rivals. A lively performer with a throaty roar, it boasted precise rack steering. Those unhappy with its poor security could soon opt for the civilised Coupé, but access was even more of a struggle than with the roadster.

Calls for more performance were answered in 1958 with a dual-overhead-cam derivative of the B-series engine, with hemispherical combustion chambers, 9.9:1 compression ratio and big valves. Expensive and unreliable, it was phased out in favour of uprated pushrod engines that, when tuned, could match Twin-Cam performance.

By the time the 100,000th MGA had been built in March 1962, it was the world’s best-selling sports car. Only 5% were sold new to the home market, 80% going to the US, so most cars now in the UK are re-imports. It took six years for testers’ requests for a higher top gear to be answered, but criticism of the hood was never addressed. Rust is the main enemy of surviving cars, followed by lack of originality, although there are still plenty of excellent examples around.

The standard MGA should perform briskly; if the engine feels flat, it needs attention. Raising the hood will reveal how it fits, plus the noise of the running gear. Various stages of tune were offered, involving polishing ports, changing carb needles (or swapping for bigger carbs), an uprated cam, higher-compression pistons and so on. Some, such as a crossflow head or a supercharger kit, are now sought-after, but over-zealous tuning may affect tractability for normal road use.

The Twin-Cam’s high compression when new was its undoing, resulting in holed pistons – 8.3:1 became available and something less than the standard 9.9:1 is advisable now. High oil thirst and an inaccessible dipstick didn’t help; it was also too easy to over-rev. Despite some common parts, its cylinder block differed from the standard model. Incorrect sparkplugs and ignition settings also contributed to piston-holing issues, but today a Twin-Cam can be a reliable as well as sparkling performer if carefully maintained.

Any MGA should feel confidence-inspiring, with light, precise rack steering on crossplies or radials. The Motor found that running all tyres at 27psi avoided understeer – a recommendation that’s still followed (30psi works well with 155s). An anti-roll bar was optional on the MkII. Many cars now in the UK are imports, mostly from the USA and conversion from left-hand drive is straightforward. Cheap, plentiful parts availability has encouraged owners to upgrade many items, not to mention appearance: 60% of MGAs were white when new, but few are now. Tracing a truly original car can be a challenge.

“I bought my first MGA for £105, aged 19,” recalls Eaglen. “It was a bit of a wreck, but had an MoT, and I scraped the cash together to keep it going. A delight to drive – as long as you’re not in a serious hurry! – it was my daily transport, covering thousands of miles until its chassis needed a second rebuild. So, sadly, it had to be sold. I promised that one day I’d buy another: in 1989, I found myself almost priced out of an overheating market, but persevered. There’s something so wonderful about the engine note, roadholding, seating position and gorgeous looks – and the smiles I get make me feel as if I’m providing some kind of social service. Most mechanical things are straightforward and parts availability is fantastic, and reasonably priced.”

For Not too concours; ready to enjoy

This is an interesting Twin-Cam, being assembled in South Africa in 1961 from a Completely Knocked Down kit made in 1960, and is just 11 cars from the end of production. It’s for sale only because the owner has too many As and has just bought another that he has to make room for.

The body is excellent, with close door fits and the sill joints good on one side and gappy on the other, as is usual. It was painted in late 2014 and still has the factory radiator shell and wing-top vents, with fine chrome. The tyres are half-worn Avon ZZs, with an older Michelin on the spare. The original jack and tools are also in the boot. The seats were locally upholstered on South African cars and the red leather is now nicely mellowed but possibly original. The grey vinyl hood is in decent order with a clear rear window.

The car was first equipped with a standard engine and gearbox and later had a 1762cc unit and close-ratio ’box. It has since been refitted with a correct 1588cc Twin-Cam built in 2014 by Jim Alcorn of Autovintagery in California, plus a standard transmission. As a South African car, it would have had the oil cooler from new.

It starts readily with that typically BMC fruity exhaust note and shows 60psi oil pressure at any revs when warm but, because it’s running in, we didn’t push it beyond 4000rpm. Temperature is steady at 160ºF, the gearchange super-direct, the chassis tracks straight and the brakes are smooth.

Cabin lovely, too, with Becker Europa radio and Moto-Lita.

The MGA is a paradox – one of the last new designs built with wooden floorboards – but now, who cares? It’s a fun, lively, stunning-looking ’50s sports car that is easy to drive and cheap to run. Accurate, original spec (look for details such as the full toolkit) will be highly valued in the future, but a well-restored, rust-free body is the crucial consideration for now.

Sweet 1600 was recently sold by the Runnymede

An MGA isn’t just glorious to look at – with sublime styling by Syd Enever – it also handles and goes well. Sunvisors are non-original but a practical addition.

Sidelights on wing tops for Lancashire police 1500s in 1957.

The B-series is a robust unit, thriving on regular maintenance. Tired ones show low oil pressure when hot (should be 50psi-plus at speed), high oil consumption, blue smoke, rumbles and rattles, plus poor performance. If it’s worn, rebuild or drop in an MGB unit for instant performance boost. Check for water loss; the head can crack.

Hard to erect single-handed, the hood often stays furled under a tonneau. Check material, frame and sidescreens are in good order and fit together well.

Dual master cylinder for brake & clutch is £96; drum brakes are adequate if not abused. Front discs are better and all discs the ultimate, but costlier to rebuild.

Feel for tired synchro, particularly on second. Overdrive can be retrofitted with chassis mods. Five-speed ’boxes are popular: £966 + Sierra transmission.

A lot is exposed underneath, including batteries, chassis and springs. Axle is robust provided it’s not run dry: check for oil getting into rear brake drums.

Colour choice was limited, but specials were common. Dash could be trimmed in leather, vinyl or rexine. A nice cabin is a bonus, especially with deluxe seats. 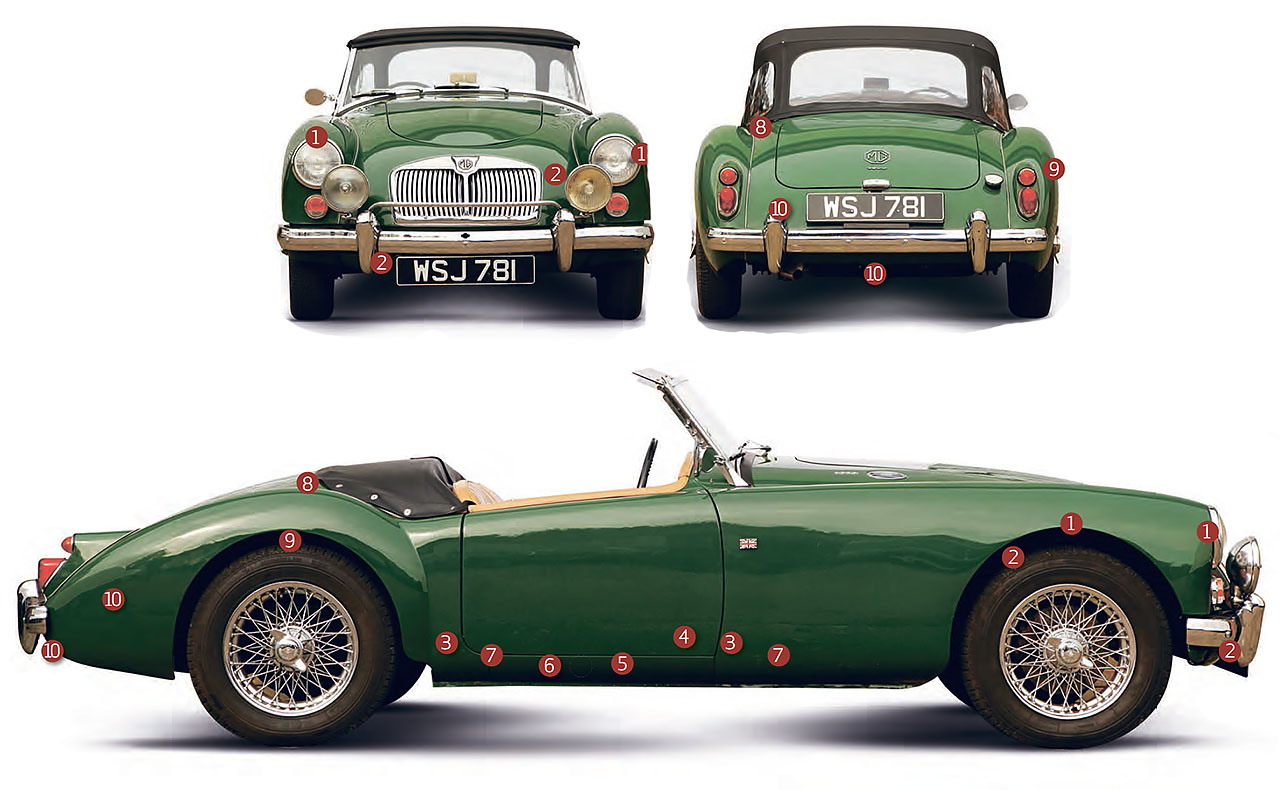